• UNICEF has asked rich nations to "donate now" to avoid wasting COVID-19 jabs. The UN charity for alleviating child poverty organized a letter signed by celebrities, addressed to the G7 summit, which will be held in the UK this week.

• The UK opened vaccine appointments for those aged over 25 this morning. Fears of young people avoiding vaccination appear to be unfounded, as the government appointment website crashed due to the amount of people accessing it.

• Teachers and school children in Czechia will no longer have to wear masks in classrooms from today, but they will have to put them back on to move around the rest of the school building. The latest figures show 45 percent of Czech adults have been offered at least one vaccine jab.

• In Brussels citizens won't need to wear facemasks outside in public spaces from tomorrow. It means locals can explore the central Belgian region without having to remember a face covering, although they may be asked to wear one in busy public spaces, or on transport.

• Swedish businesses reported increased confidence moving out of the pandemic this week, despite more firms reporting supply-chain issues and delays. "Problems with shortages of certain important components are leading to delays and increased costs," according to the country's central bank.

• Malta's Foreign Minister Evarist Bartolo said the UK government's decision to not include the Mediterranean island nation on it's "safe travel" list was a "political decision." The minister added the UK government was "ignoring scientific advice." 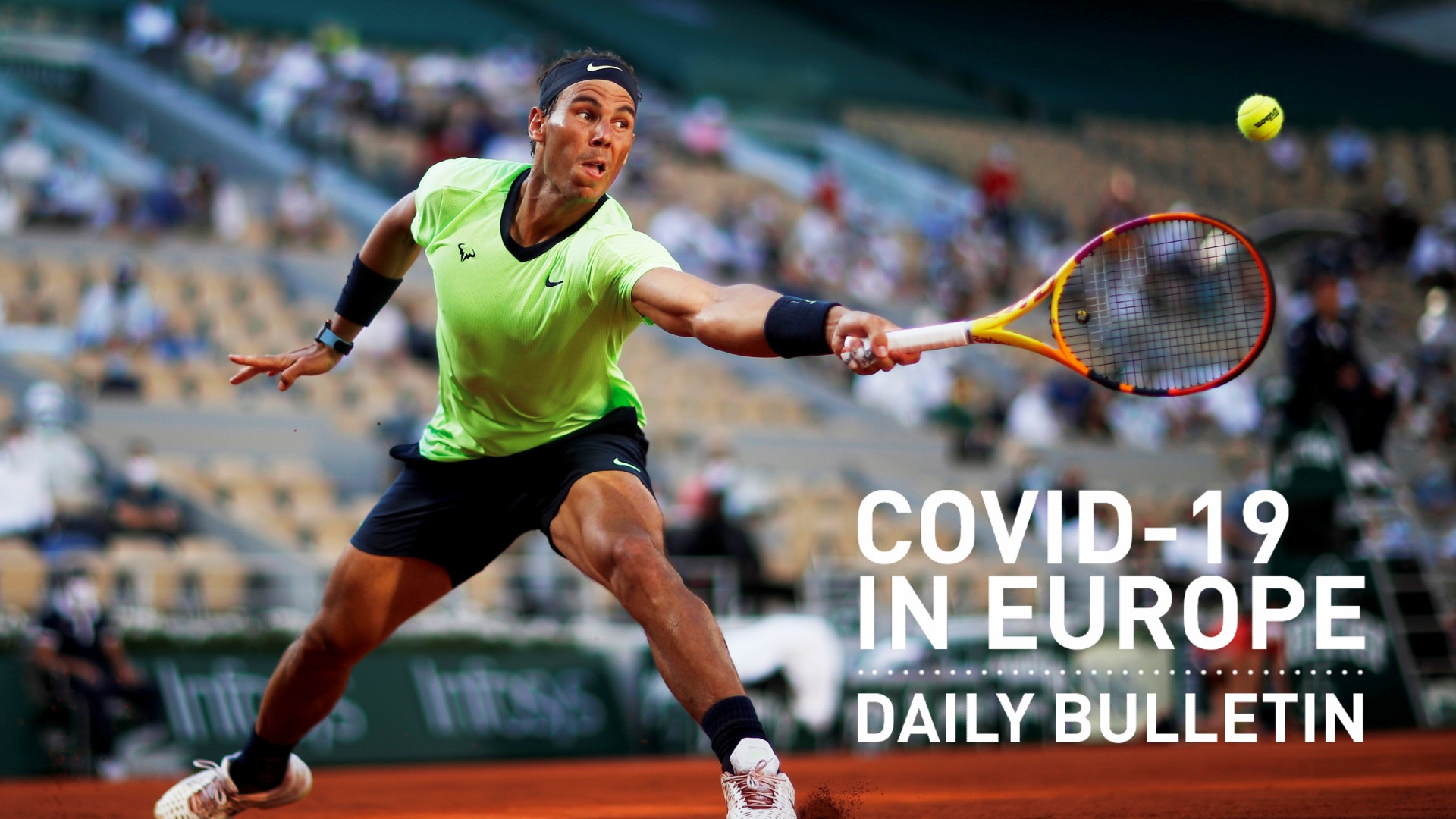 The French Open at Roland Garros continues, with a limited number of fans. /Reuters/Gonzalo Fuentes

The French Open at Roland Garros continues, with a limited number of fans. /Reuters/Gonzalo Fuentes

Brussels has decided to lift its mask mandate as COVID-19 infections plunge and vaccinations pick up pace. As of Wednesday, wearing a mask outdoors will no longer be required, with the exception of in busy pedestrian streets.

There are now fewer than 1,000 people in hospital being treated for the virus and the number of average daily infections is down to 1,379, a 25 percent fall from the previous week.

Wednesday also ushers in nationwide easing of COVID-19 restrictions, including the resumption of indoor dining and the reopening of cinemas and gyms.

Slovakia will recognize Hungarian COVID-19 vaccination certificates and accept Hungarians who have had the Sputnik V and Sinopharm vaccines. Neither the Russian or Chinese jab have been approved by the European Medical Authority, meaning some countries do not recognize the vaccines.

Slovakia began using Russia's Sputnik V on Monday, becoming the second country in the EU to use the vaccine after Hungary. Teenagers in Slovakia can now be vaccinated as well, with anyone over 12 eligible for the Pfizer vaccine.

A cluster of possible cases of the Delta variant of COVID-19 is under investigation in France's Landes region, near Bordeaux. Up to 200 people are being checked to see if they have the mutation that was first identified in India.

The head of France's Scientific Council said "it will be very difficult to keep wearing face masks after June 30." Jean-Francois Delfraissy, who is advising the government on the pandemic, says that the plan for easing restrictions and the health indicators "are going in the right direction."

Ministers are finalizing plans for tomorrow's major loosening of restrictions, including moving the national curfew to 11 p.m., allowing indoor dining at cafes and restaurants and opening the border to non-essential travel from certain countries. 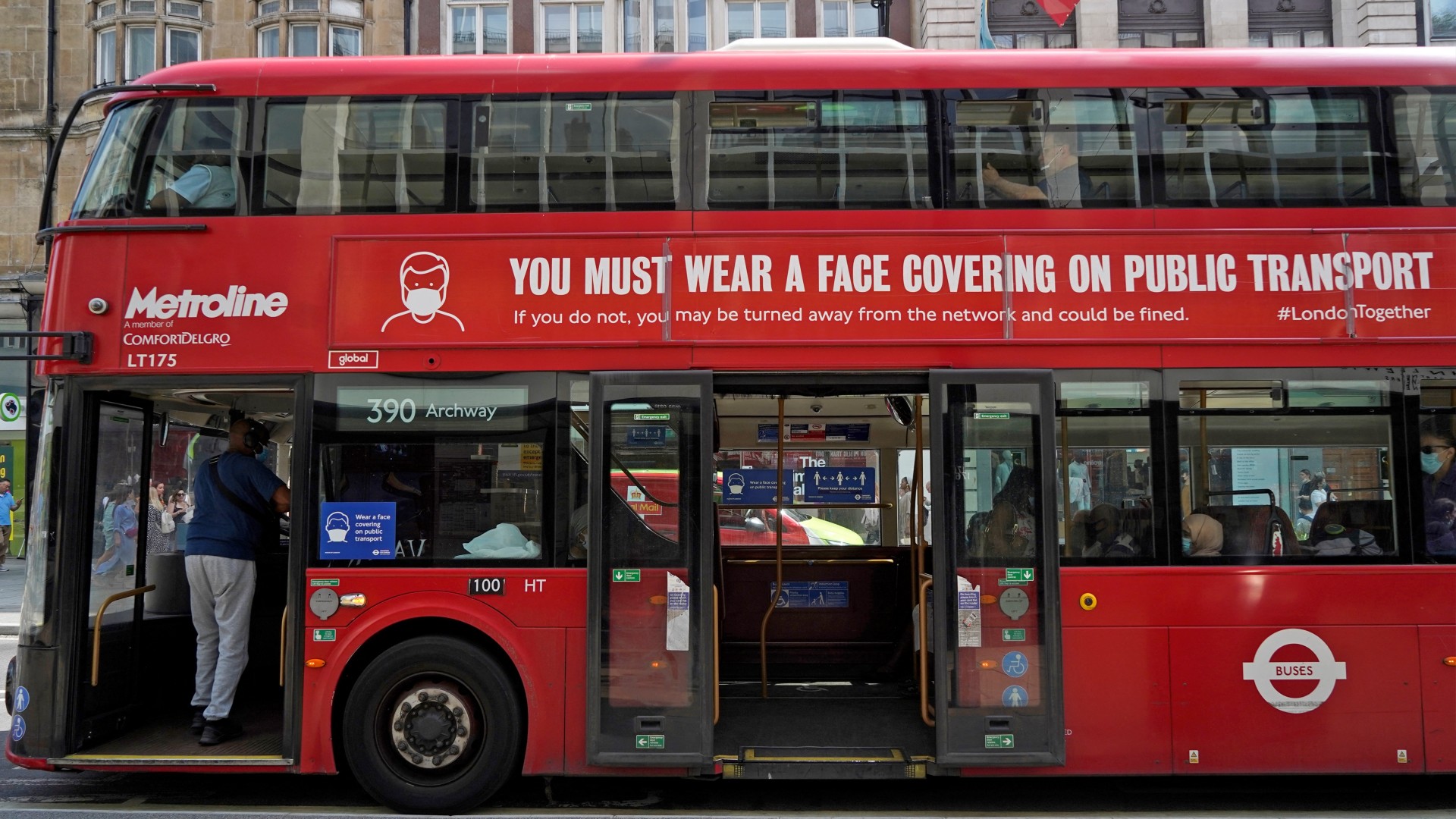 Signs on buses and sidewalks in London remind members of the public to maintain social distancing and face coverings, despite the opening of shops and hospitality venues. /Niklas Halle'n/AFP

Signs on buses and sidewalks in London remind members of the public to maintain social distancing and face coverings, despite the opening of shops and hospitality venues. /Niklas Halle'n/AFP

The final lifting of lockdowns in the UK could be delayed by between two weeks and a month after a downbeat briefing to ministers from scientific advisers.

The delay would allow the full vaccination of all over-50s in the face of data that experts have described as "fairly grim."

From today, everyone aged 25 and over in England will be invited to get a first COVID-19 vaccine. Fears that younger generations may be more hesitant to have a vaccine seem to be unfounded after the government website showed queues of more than 10,000 people waiting for a slot to book an appointment.

The government says 12,383 cases of the Delta variant have been recorded in the UK so far, and that only 126 people of those were admitted to hospital.

Of those, 83 were unvaccinated, 28 had had one dose and three had received both doses.

The opening of Germany's vaccination campaign to everyone on Monday has been as popular as many imagined. Der Spiegel compared the rush to "a pack of wolves pouncing on a piece of meat."

Doctors giving the jabs say their phone lines are inundated with calls from eager patients, some have even tried to bribe their way in. Complicating matters further is the fact that many vaccination clinics are still unable to offer appointments to the general population because of a backlog of priority patients in the hundreds of thousands.

The unlocking of COVID-19 vaccines for all in Germany includes children over 12 years old.