Norway, Iceland, Liechtenstein and the UK have agreed on a post-Brexit trade deal, focused on slashing tariffs on British food and farm products and boosting digital services.

The agreement, which the UK government has described as "the most advanced free trade deal signed by the three countries to date," will cut tariffs that can be as high as 277 percent for exports of British cheese to Norway and also reduce import tariffs on shrimps, prawns and haddock exported from the UK, together with pork, poultry and other goods.

No tariffs will apply on British white fish - like cod - imported to Norway.

UK wines and spirits, including Scotch Whisky, will also now be recognized in Norway and Iceland. 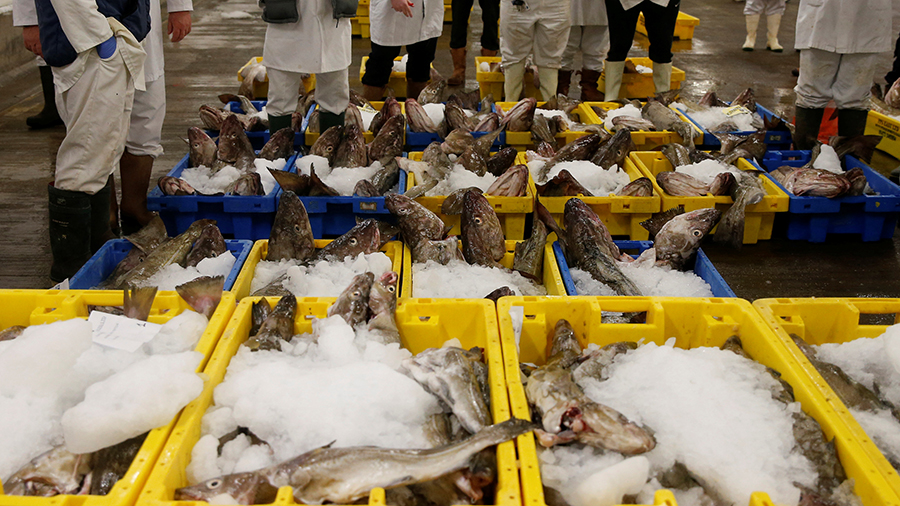 Under the deal with Norway, import tariffs on Norwegian fish and seafood would be reduced, benefitting the fish processing industry in the north of England. /Reuters/Phil Noble/File Photo

Under the deal with Norway, import tariffs on Norwegian fish and seafood would be reduced, benefitting the fish processing industry in the north of England. /Reuters/Phil Noble/File Photo

"Today's deal will be a major boost for our trade with Norway, Iceland and Liechtenstein, growing an economic relationship already worth £21.6 billion ($30.6bn)," said the UK International Trade Secretary Liz Truss.

The agreement was particularly important for Norway, whose biggest trading partner is the UK, mostly because of gas exports. Norwegian Prime Minister Erna Solberg told a news conference in Oslo that "the deal allows for growth in trade for both our countries."

Total trade between Iceland and the UK was worth $792 million, with Iceland exporting fish, sheep meat and the Icelandic yoghurt skyr.

"A new free trade agreement with Britain will be crucial for both Icelandic companies and consumers," Iceland's foreign minister Gudlaugur Thor Thordarson said in a statement.

From the end of the Brexit transition period until today, exports between the UK and the three non-EU countries have operated on the basis of temporary trade agreements.

The UK government is currently negotiating a trade deal with Australia, expected to be finalized this month, and has begun talks with India, New Zealand and the U.S..