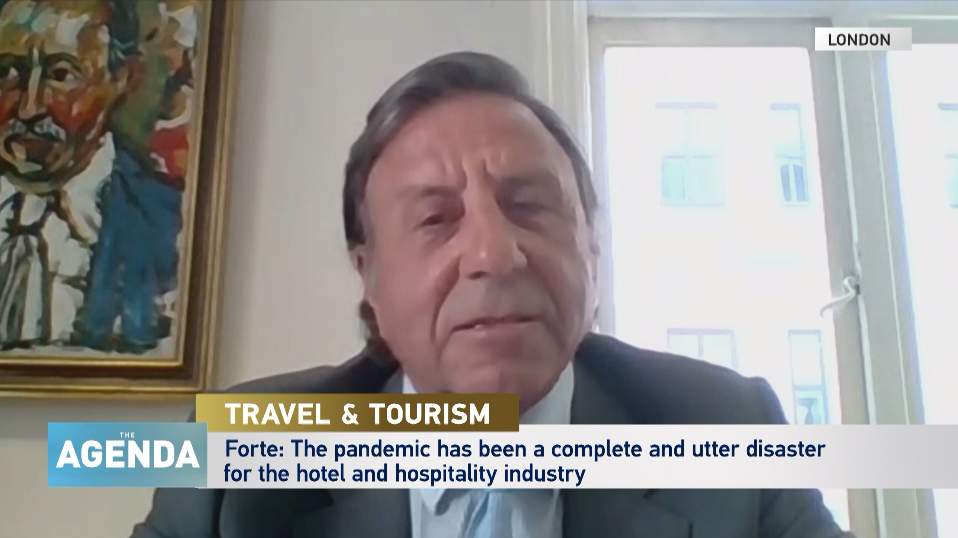 Hotel rooms have been gathering dust for more than a year, with some even being used as vaccination hubs. But is there now finally room for optimism in the hospitality industry?

Rocco Forte has been chairman of the luxury chain Rocco Forte Hotels for almost 30 years (since 1992). The group owns 15 hotels around the world, including in Italy, London and Shanghai.

He received a knighthood in the UK's new year honors list for his services to the tourism industry, and also received the highest Italian accolade, the Gran Croce dell' Ordine al Merito della Republicca Italiana, for his entrepreneurial merits and strong links with Italy in March 2005.

From 1991 to 1996, Forte was President of the British Hospitality Association (the main trade body for the UK hotel and catering industry) and he has also been an active member of the Executive Committee of the World Travel & Tourism Council.

WHAT DOES HE SAY

Forte told The Agenda with Stephen Cole about how he plans to battle the Zoom-boom and bring back leisure and corporate customers. Asked of the impact of COVID-19 on the hotel industry, he said it's been "a complete and utter disaster" for hospitality.

Forte has noted how European countries have handled the situation by providing differing levels of direct financial support. "It's varied across different countries," he said. "I don't think enough has been done in Britain, for example. We've had the federal scheme, which obviously helps, but that's more helpful to the people employed and the employers themselves.

"There's still a cost to the employer in Germany. The government is now giving direct grants to cover overhead costs over a six-month period, and they will be substantial. I have three hotels and in Germany will be receiving 12 million euros [$14.4m] under this scheme.

"In Italy, the situation tends to change but there has been more direct help – 60 percent of the rent can be offset against past or future taxes. But generally, it's meant using one's own existing financial resources and securing a lot more to take you through."

Forte said that in his company's 25-year history, such a situation was not just unprecedented but almost unthinkable: "I've never imagined a situation in which my business would have no income," he said. "What the politicians don't seem to understand is that if you if you don't have an income, you can't survive, and I find it very frustrating." Despite significant financial challenges since the pandemic, Forte is keen to use the experience as a learning curve to improve the operation of his business:

"I think we'll come out of this with a much more efficient operation and hopefully we'll be able to boost our sales as the recovery starts.

"Hotels have had to open and close at fairly short notice so I think in future they'll be able to adjust better during tough periods, so I suppose that is a bit of a positive that's come out of it."

Bjorn Tore Larsen, CEO of newly-founded Norse Atlantic Airways, sets out his hopes for a great travel take-off by the end of 2021.