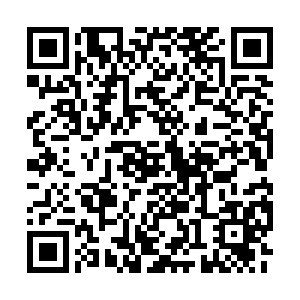 - Iceland's government is to propose tightening some of its border controls in a bid to ease domestic restrictions. The changes, which will take effect from April 22 to June 30, would mean visitors coming from nations with high infection rates would need to enter a period of quarantine.

- Thousands of anti-lockdown demonstrators clashed with police in Berlin on Wednesday as the government attempts to push through a new law that would give it power to impose lockdowns on regions where infection rates are rising.

- Russia's President Vladimir Putin has said the country is aiming to reach herd immunity by the fall and urged all of the country’s citizens to get vaccinated in order to achieve the goal.

- Lockdown measures in Sweden may need to be tightened if people continue to ignore existing measures amid a surge in infections, the minister for health and social affairs, Lena Hallengren, has said. "There is no room now to start living as if the pandemic is already over. The infection rate does not go down by itself," she added.

- All Spanish athletes competing at this year's Tokyo Olympic Games will be vaccinated before heading to the competition, the president of Spain's National Council for Sports, Jose Manuel Franco, said.

- Poland is to reopen hair salons and let some children return to schools in 11 of its 16 regions from April 26 as case numbers continue to decline, Health Minister Adam Niedzielski has confirmed.

- Greece should be able to open up for tourists from May 15, Prime Minister Kyriakos Mitsotakis has admitted. On Tuesday, Mitsotakis said he hopes that the country will soon be able to return to some kind of normality because "the health crisis in one way or another is reaching its end."

- Spain has rejected a proposal to widen the time between the first and second vaccine doses, an idea mooted to speed up the country's vaccination program.

- The Netherlands will resume the use of the Johnson & Johnson vaccine, following a statement released by Europe's drug regulator on Tuesday. France has also said it will begin to use the jab next week.

- Spain's health ministry has said more people have now been fully vaccinated against the virus than have contracted it. "We've reached a new milestone. Let's keep pushing firmly on with our aim: immunizing 70 percent of the population before the summer is over," Prime Minister Pedro Sanchez added.

- Finland has said it could begin lifting restrictions from next week as infection rates continue to drop. However, borders will remain closed to tourists for at least the next few months, Prime Minister Sanna Marin admitted.

- France's domestic travel restrictions will end on May 3 as the country looks to further ease the nationwide restrictions, a government source has confirmed. 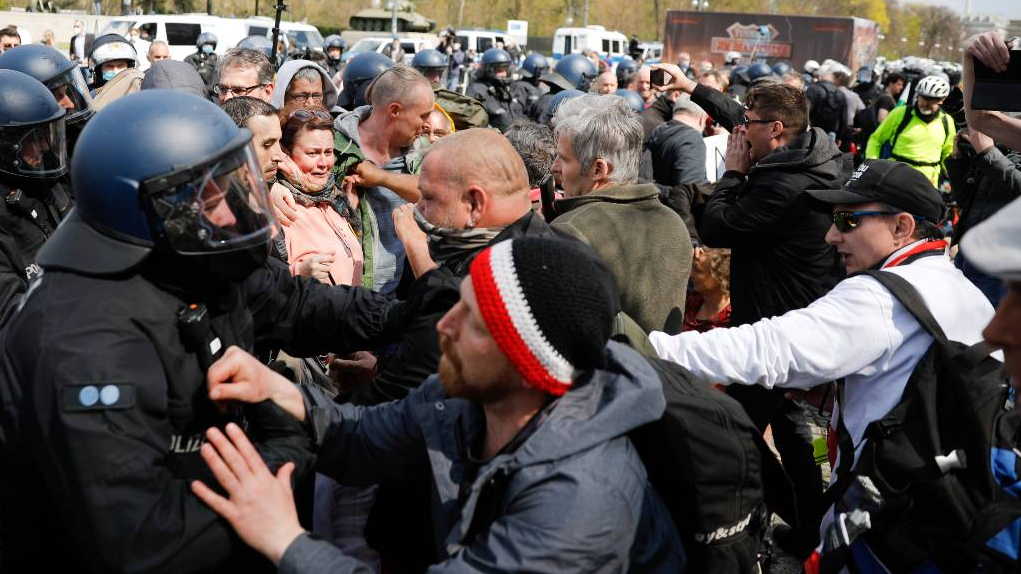 Thousands of anti-lockdown demonstrators clashed with police in Berlin on Wednesday. /AP

Thousands of anti-lockdown demonstrators clashed with police in Berlin on Wednesday. /AP

Denmark's loss is Germany's gain: 55,000 doses of AstraZeneca's coronavirus vaccine will be transferred to the German state of Schleswig-Holstein, following Copenhagen's decision to suspend use of the jab altogether.

The premiere of Schleswig-Holstein, which shares a border with Denmark, said the doses would be reimbursed "within an agreed time frame."

Denmark is sitting on a stock of around 200,000 AstraZeneca vials, which it will only release at the request of a physician. Authorities announced last week that the nation's inoculation campaign would instead be driven by the Pfizer-BioNTech and Moderna vaccines.

Similar agreements to the Schleswig-Holstein deal are likely in the coming weeks.

From Friday, India will be added to England's travel "red list" after a sharp rise in cases there.

It means travelers from the Asian country will face tougher rules for entry, including a 10-day mandatory hotel quarantine period.

Hundreds of fans gathered outside Chelsea's home stadium in West London on Tuesday evening to protest the move ahead of the team's Premier League fixture with Brighton.

Many weren't socially distancing, with gatherings of more than six people outside still illegal under current COVID-19 legislation. 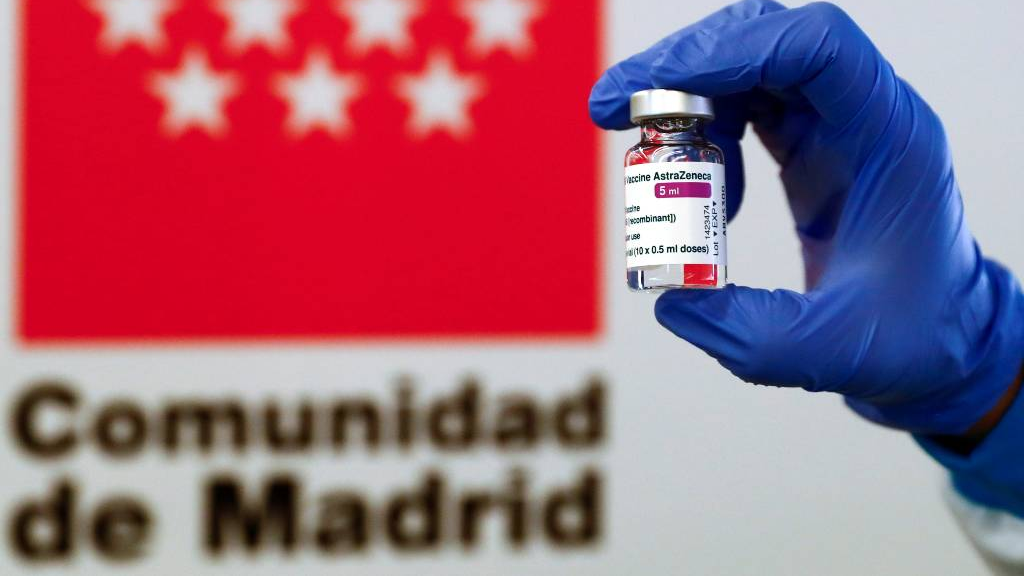 Spain has rejected a proposal to widen the time between first and second vaccine doses. /AP

Spain has rejected a proposal to widen the time between first and second vaccine doses. /AP

COVID-19 hospitalizations have dropped day-on-day in Hungary, with government data showing 8,097 coronavirus patients are still being treated, more than 500 fewer than the day before.

Of these patients, those being ventilated dropped to 925. While another 207 people have died in the past 24 hours.

More than 3.5 million people have had at least one dose of vaccine, with outdoor dining to reopen once that figure reaches 3.5 million.

World Health Organization Regional Director for Europe Hans Kluge is in Budapest today meeting with Hungary's foreign minister. In a joint press conference this morning he praised the country's healthcare system and workers for their efforts during the pandemic.

For now, the Johnson & Johnson vaccine remains in the fridge in Belgium. Authorities aren't expected to make a decision until Friday, after they receive opinions from the Vaccination Taskforce.

The EU drugs regulator said it found a "possible link" between very rare, but serious, blood clots and the single-shot vaccine. But reiterated that the benefits of the jab outweigh the risks.

Belgium's vaccination program has started to pick up pace, but infections remain stubbornly high. New cases had been dropping but flatlined on Wednesday, with an average 3,469 infections a day. 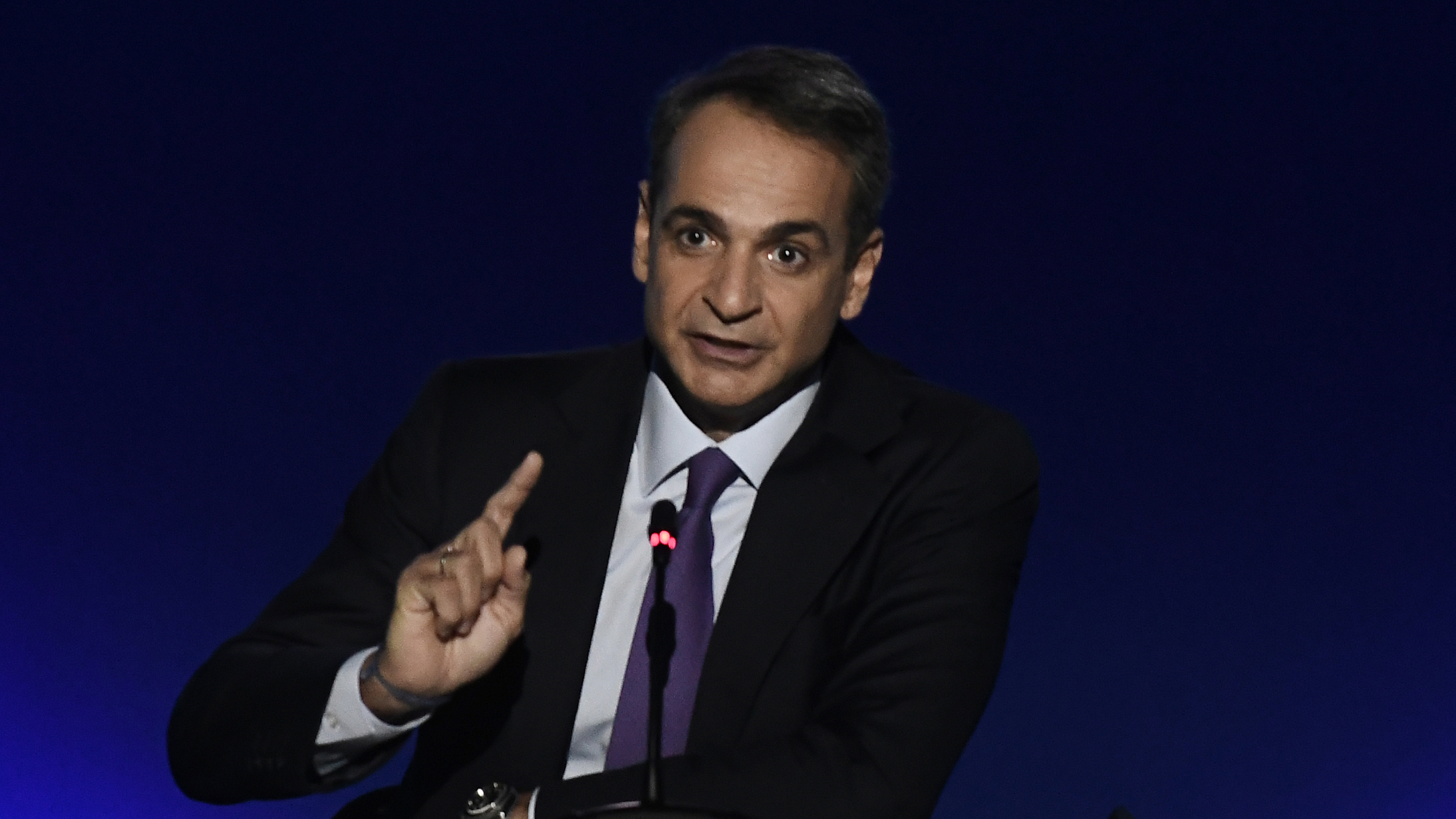 Greece should be able to open up for tourists from May 15, Prime Minister Kyriakos Mitsotakis has admitted. /AP

Greece should be able to open up for tourists from May 15, Prime Minister Kyriakos Mitsotakis has admitted. /AP