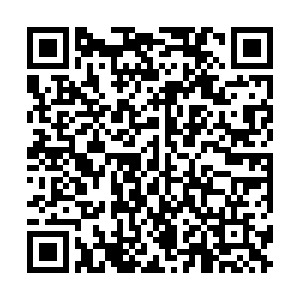 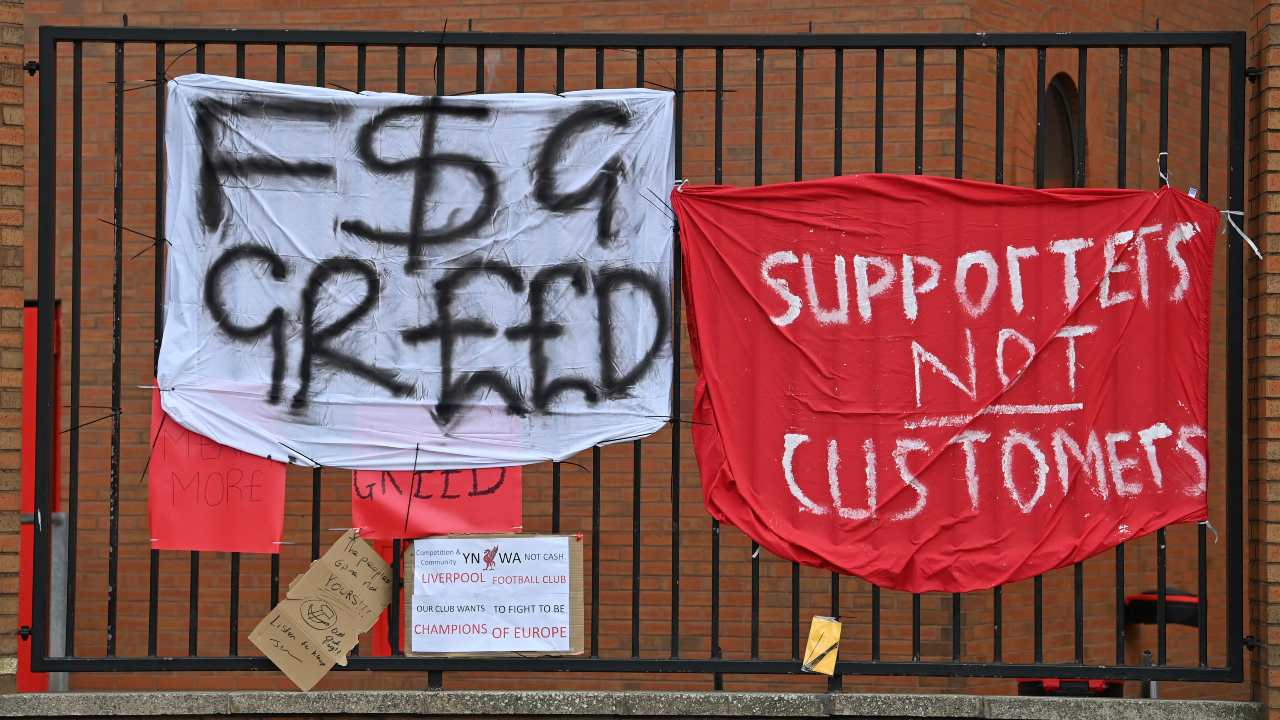 The European Super League is crumbling after just 48 hours, following a heavy backlash from players, fans and politicians. /Paul Ellis/AFP

The European Super League is crumbling after just 48 hours, following a heavy backlash from players, fans and politicians. /Paul Ellis/AFP

Europe's breakaway football league is crumbling just 48 hours after it shocked fans across the world with the announcement of its establishment.

All six English Premier League clubs that signed up for the European Super League (ESL) withdrew late on Tuesday amid a storm of protests from fans, players, managers and governments, alongside threats of bans and sanctions from the game's European and world governing bodies UEFA and FIFA.

Manchester City was the first to back out of the venture and then Chelsea, Arsenal, Manchester United, Liverpool and Tottenham Hotspur announced they were following suit.

On Wednesday, Spain's Atletico Madrid announced in a statement that it, too, was leaving the ESL.

Inter Milan looks set to be the next to leave, with a source close to the club telling Reuters the club is no longer interested in the league "in light of the latest developments."

Liverpool's principal owner John Henry on Wednesday apologized to supporters and to manager Jurgen Klopp for the disruption caused by the club's involvement in the formation of the ESL.

"I'm sorry, and I alone am responsible for the unnecessary negativity brought forward over the past couple of days," Henry said in a video on the club's website. "It's something I won't forget. And shows the power the fans have today and will rightly continue to have."

The ESL said it would "reconsider" its next steps after it was reduced to three Italian clubs – AC Milan, Juventus and Inter Milan – plus Spain's Real Madrid and Barcelona.

However, Juventus chairman and ESL founder Andrea Agnelli told Reuters on Wednesday the league can no longer go ahead after six English clubs withdrew.

The shockwave from the ESL's implosion is now set to reverberate through football, with recriminations and score-settling expected at clubs and boardrooms across the continent. The reactions have already started to pour out.

Players: "What a beautiful day for football"

"Super League is finished! Well done to all fans up and down the country!" he said on social media.

Manchester United executive vice-chairman Ed Woodward became the first casualty of the backlash, announcing his resignation shortly before his club gave up on a project he had been influential in bringing about.

Former Manchester United captain Rio Ferdinand, a fierce critic of the breakaway competition from the outset, said the teams were coming to their senses.

"Teams finally seeing sense and pulling out of the #SuperLeague ... Football is and ALWAYS will be about the fans," he said on social media.

Adding: "The fans have obviously not been a consideration at all ... disgrace."

For many footballers, the strong reaction to the ESL showed unity in the game. Brighton & Hove Albion midfielder, Adam Lallana, said: "What has been shown is that together we are stronger than anything. It is great to see everyone coming together as one."

The England's governing body, Football Association, also welcomed the withdrawals of the six English clubs, saying the ESL had "threatened the whole pyramid [of the sport]."

"English football has a proud history of opportunity for all clubs and the game has been unanimous in its disapproval of a closed league," the FA said. "It was a position that, by design, could have divided our game, but instead, it has unified us all." 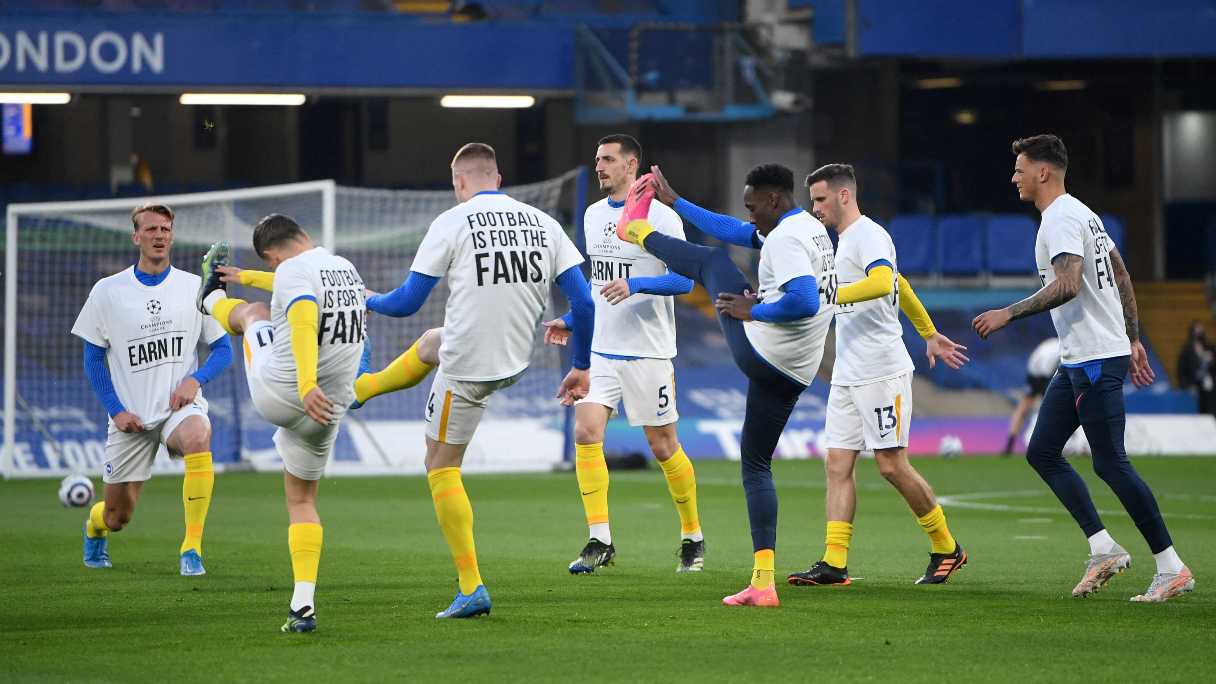 Players and former players from all clubs have expressed their joy over the disintegration of the European Super League. /Neill Hall/Pool/AFP

Players and former players from all clubs have expressed their joy over the disintegration of the European Super League. /Neill Hall/Pool/AFP

Fans gathered in large numbers outside Chelsea's Stamford Bridge stadium ahead of the team's Premier League match against Brighton & Hove Albion to protest against the breakaway league.

They ended up chanting, "We saved football!" after reports filtered through that Chelsea was abandoning the project.

Politicians: "This is the right result"

The backlash and negative reaction to the ESL and the potential split in the game, also led political leaders across to Europe to speak out and in some cases threaten intervention.

Reacting to the shock withdrawal of the English clubs, UK Prime Minister Boris Johnson said he welcomed the announcement.

"This is the right result for football fans, clubs and communities across the country. We must continue to protect our cherished national game," he said. The biggest backlash to the ESL announcement came from soccer fans, who felt the game was being taken away from them. /Adrian Dennis/AFP

The biggest backlash to the ESL announcement came from soccer fans, who felt the game was being taken away from them. /Adrian Dennis/AFP

Pundits: "The people have spoken"

There is lingering anger toward the owners of the six English clubs, with some pundits suggesting their stewardship was no longer tenable.

Former Manchester United and England defender, Gary Neville, who has been outspoken about his discontent over the ESL since its announcement, said the owners of the club "have no place in Manchester anymore."

"We have to work hard together to ensure that ownership rules in this country are changed. The people have spoken. We were on the brink of anarchy if this continued," the Sky Sports pundit added.

Liverpool great Graeme Souness also said supporters would not be able to forgive them despite the U-turns.

"The supporters will not forgive the people who decided to go for this idea ... They've been shown to be people who would take quick money. They would sell their soul basically," Souness, also now a Sky Sports pundit, said.

"They were going to sell the souls of our major football institutions. I don't know how these clubs will manage to get back onside," he added.

"The owners need to come out and say, 'we got this competition wrong. We apologize – we're begging you for forgiveness.' It won't surprise me if certain clubs went up for sale now because of the pressure they'll come under," Warnock said.

Former Arsenal forward Ian Wright said: "Remember who you are, what you are and who you represent." 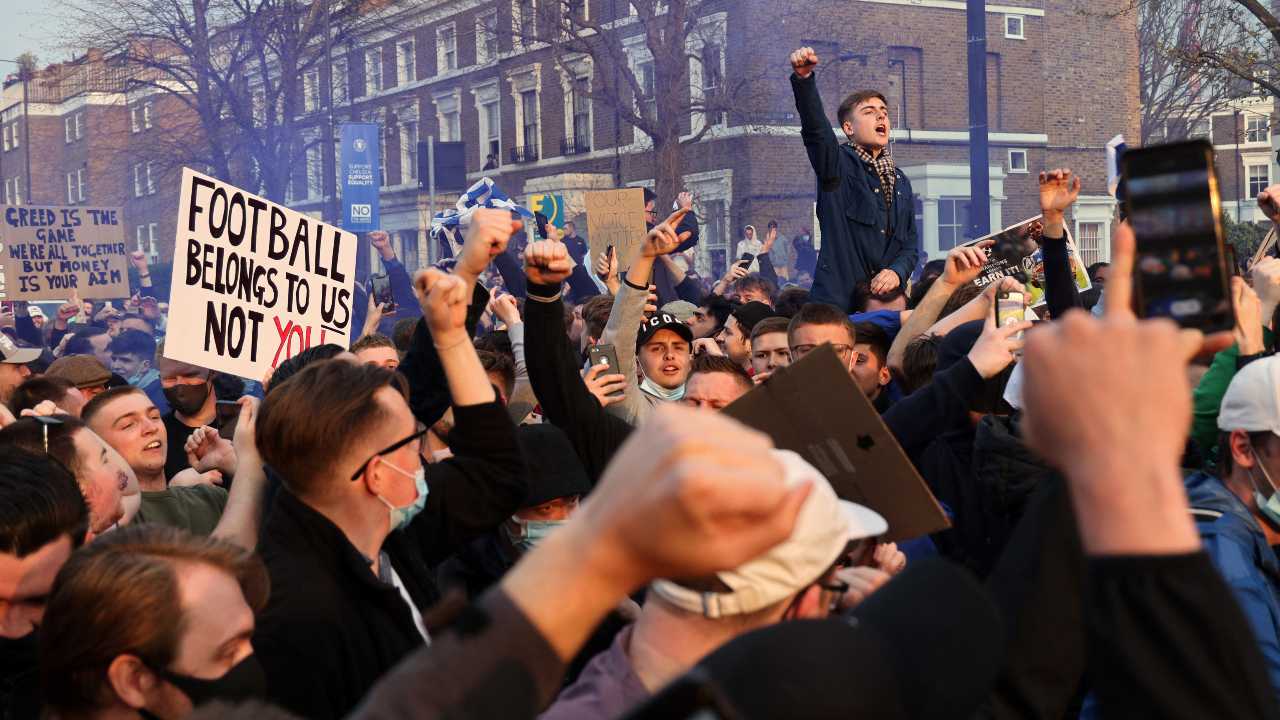 The Super League: "I remain convinced of the beauty of that project"

While the ESL beat a hasty retreat late on Tuesday, it offered no apologies.

"Despite the announced departure of the English clubs, forced to take such decisions due to the pressure on them, we are convinced our proposal is fully aligned with European law and regulations," the league said in a statement.

"Given the current circumstances, we shall reconsider the most appropriate steps to reshape the project, always having in mind our goals of offering fans the best experience possible while enhancing solidarity payments for the entire football community."

But speaking to Reuters on Wednesday, Juventus chairman and Super League founder, Andrea Agnelli, said the league can no longer go ahead after the six English clubs withdrew, but he remained convinced that European football needed change and he had no regrets about the way the breakaway attempt was made.

Asked whether the project could still happen after the exits, Agnelli told Reuters: "To be frank and honest no, evidently that is not the case."

"I remain convinced of the beauty of that project," Agnelli said, stating it would have created the best competition in the world.

"But admittedly ... I mean, I don't think that that project is now still up and running," he said.