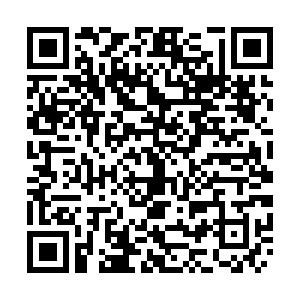 - Europe is targeting herd immunity by July, the European Union's commissioner for the internal market, Thierry Breton, said. "Let's take a symbolic date: by July 14, we have the possibility of achieving immunity across the continent. We're in the home stretch, because we know that to beat this pandemic there's just one solution: vaccination. The vaccines are arriving," he said.

- Police and protesters clashed in the city of Bristol, southwest England on Sunday as thousands of people demonstrated against a government bill that would give police new powers to restrict protests. Thousands of protesters defied COVID-19 restrictions, while some launched fireworks towards police officers, setting fire to police vehicles and spraying graffiti on them as officers in riot gear tried to repel the activists using batons and shields.

- Lithuania's President Gitanas Nauseda, Prime Minister Ingrida Simonyte and a speaker of parliament have all received the AstraZeneca vaccine on Monday in a show of trust in the jab and in the hope it will encourage others to get the shot. "The doubts were slowing down the vaccination," Simonyte said after receiving her dose. Meanwhile, Russia's President Vladimir Putin has said he would be receiving a vaccine on Tuesday.

- France's labor minister Elisabeth Borne has been hospitalized with the virus, the health ministry has said. Borne, who tested positive last week, is under medical supervision in a hospital in the Paris region and her condition is improving, the ministry added.

- AstraZeneca has said it expects the EU drug regulator, the European Medicines Agency to give approval to a factory in the Netherlands that is due to begin helping to make part of its vaccine later this month.

- Hungary has approved China's CanSino and India's CoviShield vaccines for emergency use as it seeks to speed up its vaccination program. "We are in a race against time. We will overturn the four corners of the world for as many doses of proper efficient and safe vaccines as possible," Surgeon General Cecilia Muller said.

- Spain's Tourism Minister Reyes Maroto has said he hopes the number of foreign visitors coming to Spain will rebound to pre-pandemic levels later this year.

- Any European Union restrictions on vaccine exports would be a "retrograde step" that could undermine the supply of raw materials for vaccine production, Ireland's Prime Minister Micheal Martin has said.

- Restrictive measures such as social distancing and face masks may be required for "a few years" to stop any further spread of the virus, the head of immunization at Public Health England, Mary Ramsey, said.

- Trust in the Oxford University-AstraZeneca vaccine has plummeted in recent weeks following a small number of reports of blood clots after people had the jab, according to a YouGov poll. Sixty one percent of people in France now believe the jab is unsafe, up by 18 percent, while more people in Italy (43 percent), Germany (55 percent) and Spain (52 percent) have also lost trust in the shot.

- The UK government has again reminded the European Union of its vaccine export commitments. "One thing I think we can do is remind the EU of the commitments they have made, and particularly Ursula von der Leyen, the EU president, made the commitment to the prime minister that the EU wouldn't block companies from fulfilling contractual obligations to supply vaccinations," Social Care Minister Helen Whately has said.

- France's vaccine minister, Alain Fischer, has said he expects the country to return to some kind of normality by the summer or fall, following an acceleration of its vaccination program. 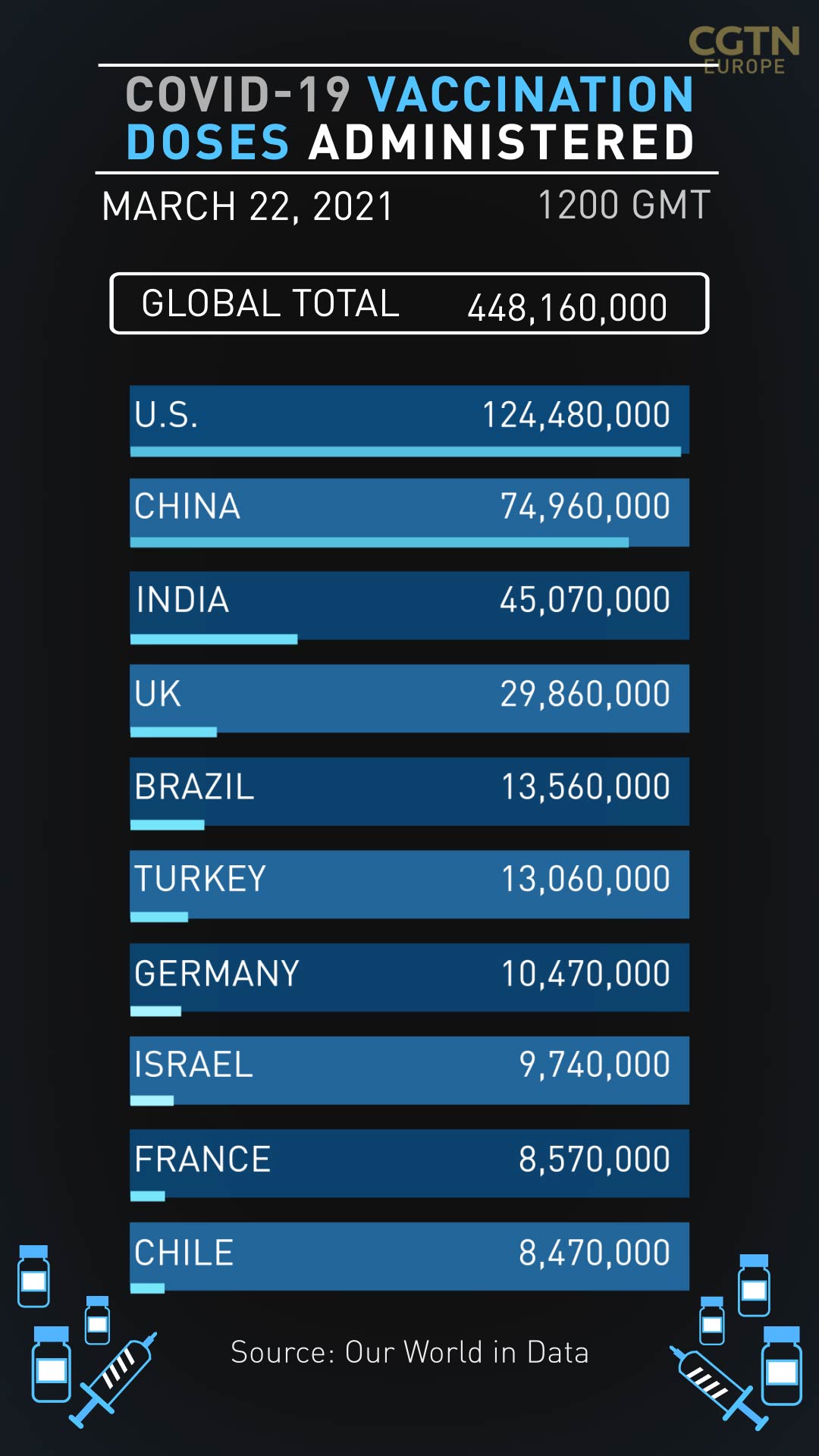 Prime Minister Mark Rutte is not expected to relax the current coronavirus measures as had been hoped during his press conference last Tuesday evening. The infection figures and the number of hospital admissions are too high to allow any relaxation.

The curfew will remain in place after April 1. Cafes, restaurants and terraces will not be allowed to open during Easter. It is also not permitted to receive more than one visitor at home per day. Colleges and universities cannot give physical lectures in the short term. Only when most people aged over 60 in the Netherlands have been vaccinated, expected in early May, can the measures be relaxed.

UK Prime Minister Boris Johnson is set to speak to EU leaders this week in a bid to contain a growing row over coronavirus vaccines.

The EU has threatened to restrict exports of jabs produced in the bloc as it looks to ramp up its relatively low vaccination rates. It has administered jabs to less than 12 percent of its population.

Meanwhile, the UK has broken its vaccine record for a third day running, with almost 850,000 receiving a first dose on Saturday. In total, around 40 percent of the UK population has been vaccinated.

Elsewhere in the UK, Wales is allowing garden centers to reopen as it further eases its national lockdown.

The head of France's vaccine strategy says the country could return to normal life "in the summer, by the fall."

He says the army is going to be involved in helping to run mass-vaccination centers. Thousands of people held a carnival in the middle of Marseille on Sunday with no social distancing and very few face masks. Seven people were arrested and the head of the Marseille region said: "The irresponsibility is of a criminal level."

A YouGov poll shows confidence across Europe in the AstraZeneca vaccine is falling. In France, 61 percent of those questioned said they do not think it is safe. In February, in a similar survey, the amount who judged it unsafe was 43 percent.

The EU's internal market commissioner says herd immunity is possible by the middle of summer. Thierry Breton said "Let's take a symbolic date: by July 14, we have the possibility of achieving immunity across the continent."

A second Chinese vaccine has been authorized for emergency use in Hungary, according to the company that makes it. CanSino Biologics said on Monday the Hungarian National Institute of Pharmacy and Nutrition granted the approval for Convidecia, based on the interim results of its phase three trial.

It's the second Chinese vaccine to be approved in Hungary, the single-dose jab is also approved in China, Pakistan and Mexico. It comes as 250,000 doses of Sputnik V arrived on Sunday night, according to the Hungarian government.

New research from the Perspective Institute says 69 percent of Hungarians want to be vaccinated, Pfizer has most support and AstraZeneca least. The Chinese and Russian vaccines fall in the middle with around 50 percent acceptance.

On Monday Spain hosts its first major face-to-face hospitality fair since the start of the pandemic.

This time last year, it was being used as an emergency field hospital as the Spanish capital became the epicenter of the coronavirus in Spain.

The event is being used to promote the recovery of one of the sectors most affected by the financial fallout of COVID-19.

PCR and antigen tests will be required to gain access and thousands of exhibitors and professional visitors from across the world are expected to attend. 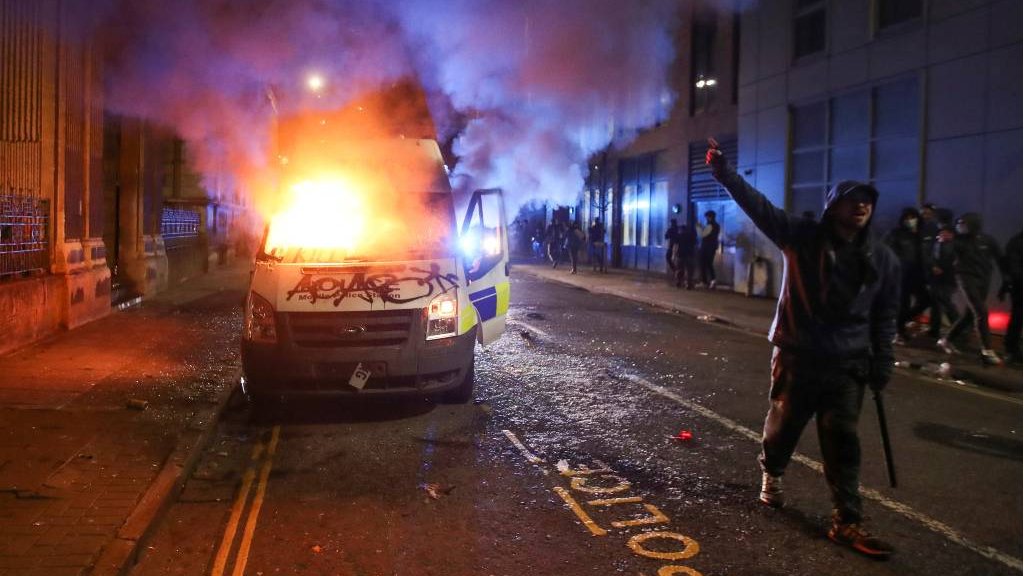 Police and protesters clashed in the city of Bristol, southwest England on Sunday as thousands of people demonstrated against a government bill that would give police new powers to restrict protests. /AP

Police and protesters clashed in the city of Bristol, southwest England on Sunday as thousands of people demonstrated against a government bill that would give police new powers to restrict protests. /AP