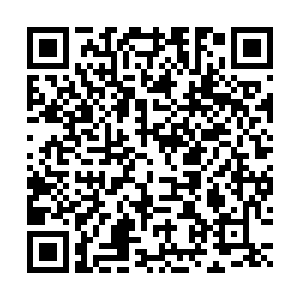 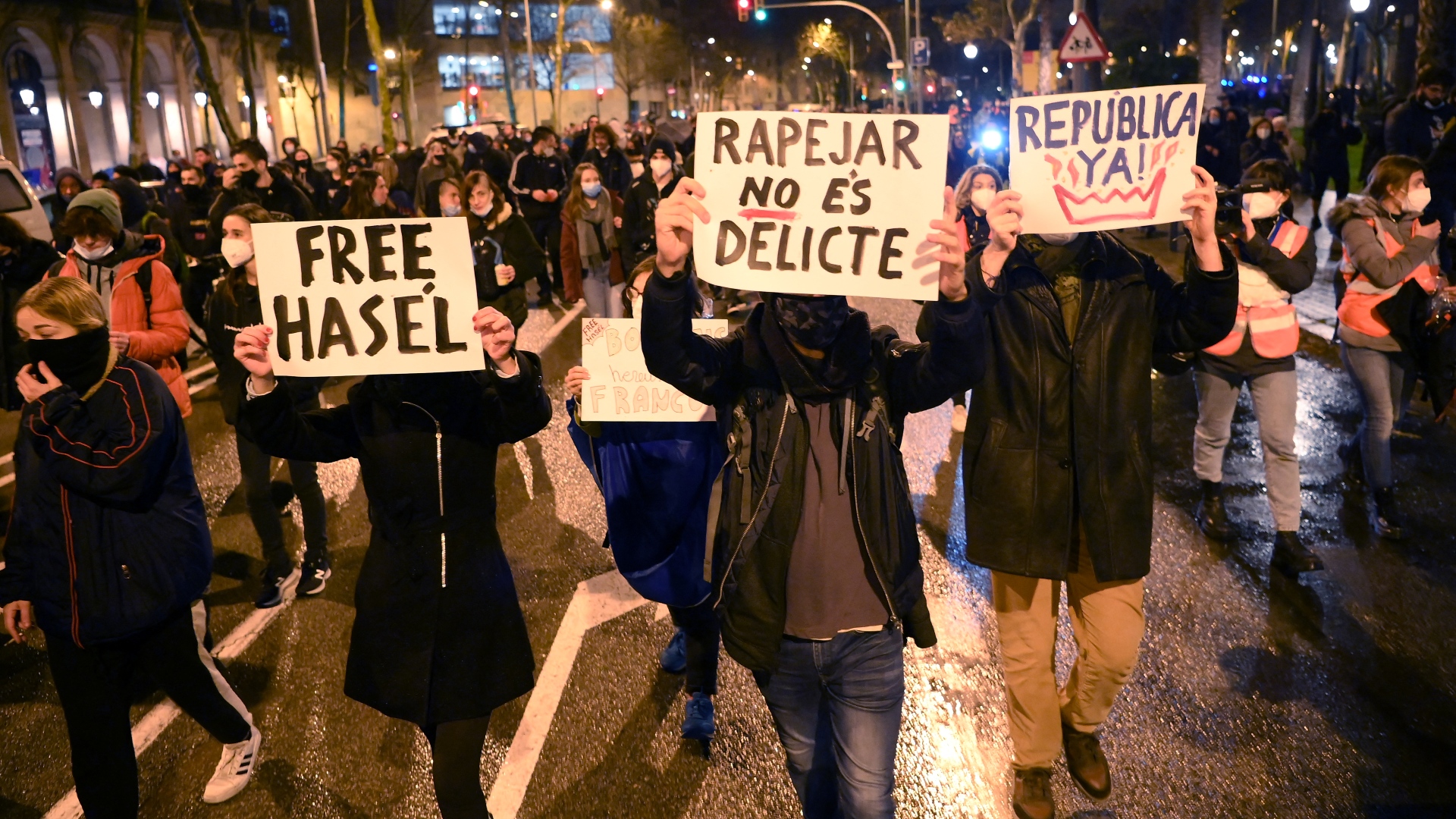 Violent unrest and political upset within Spain's socialist-led coalition government is continuing across Spain after a week of protests and clashes following the arrest of rapper Pablo Hasel for glorifying terrorism and insulting royalty in his songs.

While many rallies in various cities in Spain, mainly in the Catalonia region, involved hundreds of demonstrators chanting and peacefully holding up placards, some turned violent with protesters throwing objects at the police and setting things on fire while police forces charged at crowds, some using batons and firing foam bullets – resulting in one protester losing her eye.

More than a hundred arrests have been made across Catalonia and in other Spanish cities, while scores more were injured in the altercations, including protesters and police.

As fires rage, both literally and figuratively, in the country and authorities appeal for calm, here's what you need to know: When did the protests start?

The protests have been going on since Tuesday February 16, when 32-year-old Hasel, whose real name is Pablo Rivadulla Duro, was arrested by police at a university in the Catalan city of Lleida.

Hasel had barricaded himself along with his supporters in the university to avoid the start of his nine-month jail sentence for which he was convicted in 2018.

Where are the protests taking place?

While the protests began almost immediately after Hasel's arrest in his hometown of Lleida in the northeastern region of Catalonia, they quickly spread to other Catalan cities.

In the following days and nights, large groups of protesters massed for marches on the streets of Barcelona, Spain's second city and the Catalonian capital.

As some protests turned violent and police were deployed to several cities in the region to quell the unrest, protests then spread beyond Catalonia with hundreds gathering in cities across Spain, including the capital Madrid, Valencia in the east, the southern cities of Granada, Malaga, Cordoba and Seville and in the northern cities of Santander and Logrono. 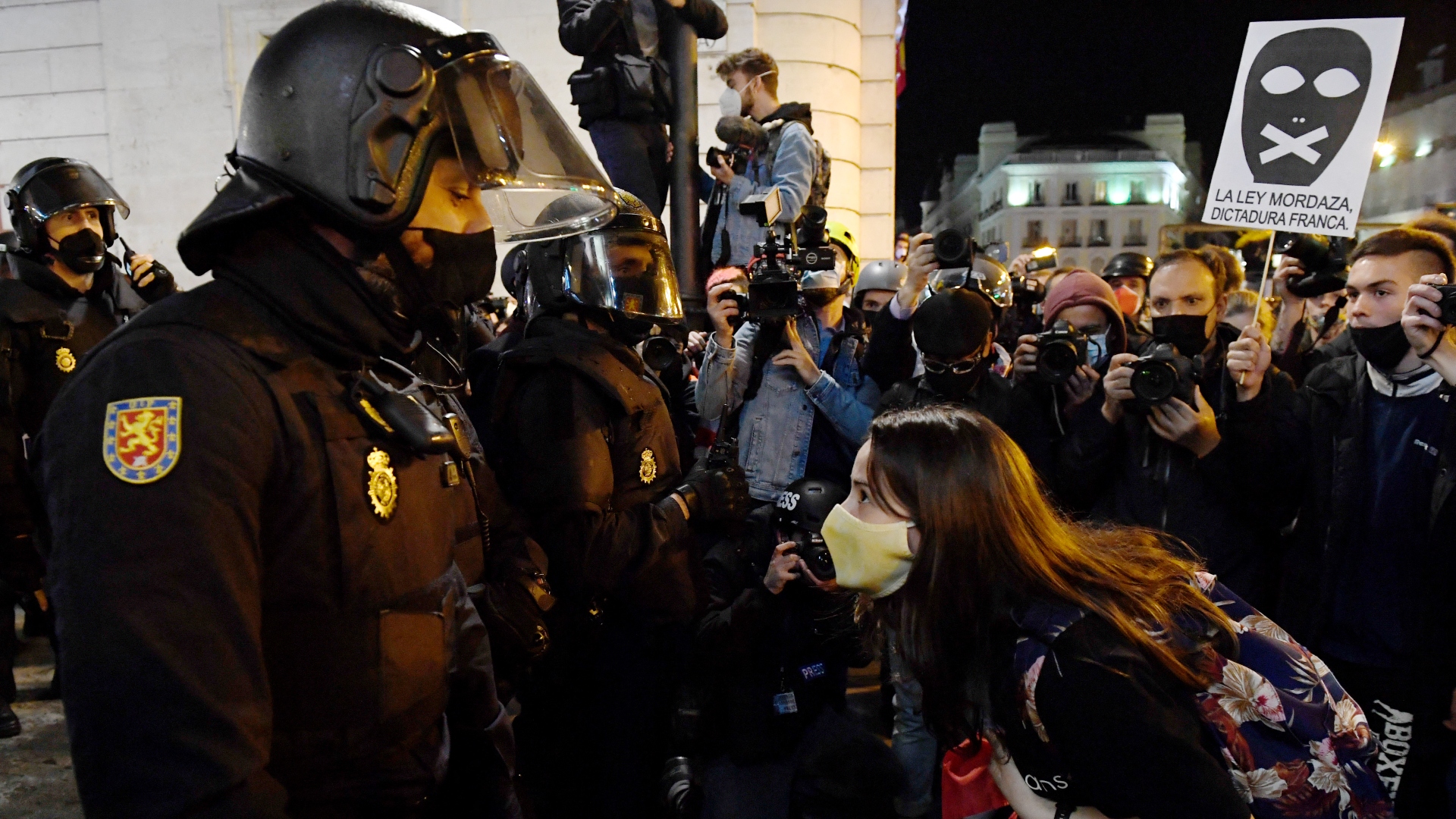 Hundreds of protesters took to the streets of Spain's capital Madrid and were met by police forces, with some clashes reported. /Pierre-Philippe Marcou/AFP

Hundreds of protesters took to the streets of Spain's capital Madrid and were met by police forces, with some clashes reported. /Pierre-Philippe Marcou/AFP

Why are people protesting?

The rallies and marches that had gathered in several cities across Catalonia soon after Pablo Hasel's arrest had one demand: protesters chanted and held banners demanding the rapper be released.

Known for his hard-left views, Hasel was handed a nine-month sentence over tweets "glorifying terrorism" and videos inciting violence. At issue were lyrics and tweets of his which defended members of the Basque separatist group ETA and Marxist group GRAPO – both of which Spanish authorities consider terrorist organizations.

The court ruling said freedom of expression could not be used "as a 'blank cheque' to praise the perpetrators of terrorism."

He was also fined roughly $36,000 for insult, libel and slander, following tweets calling former King Juan Carlos I a "mafia boss" and accusing police of torturing and killing demonstrators and migrants, "sowing racism" and "murdering with impunity." Those verbal attacks were deemed to have fallen foul of Spain's penal code that criminalizes "insulting" the crown and the police.

His case has become a cause celebre among campaigners, who say that jailing him is a disproportionate response and a dangerous assault on free speech.

Some protesters also carried the Estelada, the flag of the Catalan pro-independence movement, a social and political movement with roots in Catalan nationalism, which seeks the independence of Catalonia from Spain. Pablo Hasel, whose real name is Pablo Rivadulla Duro, was arrested by police at a university in the Catalan city of Lleida. /J.Martin/AFP

Pablo Hasel, whose real name is Pablo Rivadulla Duro, was arrested by police at a university in the Catalan city of Lleida. /J.Martin/AFP

Freedom of speech and democracy

For many, the protests were about more than just Hasel as a figure, controversial as he is, but the fact that the arrest ignited public alarm in Spain over free speech and the country's democratic values.

"I don't embrace most of the ideas he expresses in his songs, but I believe that all of us shall fight to defend the possibility of expressing these ideas," one protester named Marc told AFP.

To many of these protesters, including people who find Hasel's lyrics inappropriate, his jailing is yet another worrying example of Spain's judicial system punishing people not for their physical actions, but for what they have expressed whether in a song, tweet or even illustration.

Human rights group Amnesty International, as well as Spanish celebrities including Hollywood star Javier Bardem and film director Pedro Almodovar, condemned Hasel's sentencing – along with other similar jailings – saying they're having a chilling effect on freedom of speech. Rallies took place in several cities across Spain calling for an upheaval of the country's judicial system and what they see as its punitive measures limiting free speech. /Pau Barrena/AFP

Rallies took place in several cities across Spain calling for an upheaval of the country's judicial system and what they see as its punitive measures limiting free speech. /Pau Barrena/AFP

Spain's Prime Minister Pedro Sanchez accepted on Friday that Spanish democracy had work to do "when it comes to widening and improving the protection of freedom of expression." But, he added: "In a full democracy, there is no place whatsoever for any kind of violence and there are no exceptions."

But the protests and subsequent clashes also sparked a political row, bringing to light a divide within Spain's left-wing coalition, which groups Sanchez's Socialists with the leftist Podemos. While the Socialists have strongly opposed the violence, Podemos's leadership backed the protesters, saying the Hasel case exposes Spain's "democratic shortcomings." "It is obvious that Spain does not have a situation of political and democratic normality," Podemos leader Pablo Iglesias said.

Yet, across the country there are many who support Hasel's imprisonment, and say his lyrics and tweets are an unacceptable humiliation of the victims of terrorism and they unlawfully incite hatred against the police and the country's former king.

"They don't know how far freedom of speech goes. This guy can't keep insulting. If we think someone is a thief, we report him to the police. Today, we can't do it anymore. If you were insulted, wouldn't you go and file a complaint? It's the same thing," said Joan, a retiree from the Catalonia region.

"At the end of the day, these are just people who want to fuel their own propaganda," he added.

"I think there should be more freedom of speech. But there is one thing that a lot of people don't say: it's that there are other crimes that he is jailed for, it is not just for insults against the crown, etc...," Lucas de Urrutia, a 23-year-old student from Catalonia, also told AFP. Many of the protesters on the streets were younger Spaniards, who were displaying their anger at what they said were a number of deeper political and social issues facing them in the country. /Pau Barrena/AFP

Many of the protesters on the streets were younger Spaniards, who were displaying their anger at what they said were a number of deeper political and social issues facing them in the country. /Pau Barrena/AFP

However, many of the protesters who took to the streets and displayed their anger were younger Spaniards. For them, Hasel's arrest and imprisonment was the spark that ignited a larger bonfire of other grievances.

"Pablo Hasel was the spark, but there are many more things. We are fed up with injustices, job insecurity, repression and this has made us explode," 20-year-old history student Maria, who chose not to use her real name, told AFP.

"It's really scary to come here and to be arrested, take a beating or lose an eye, but it's scarier to stay at home and not to fight for our rights," she added.

Over the past week, young people's growing anger and discontent overwhelmed any fear they might have about clashing with the police. They say that for them, what was most important was getting their voices heard.

"There are a lot of things behind it," another student protester, Alba, told AFP. "We see that society is collapsing on many levels – economically, ecologically, socially – and our generation will be the one to pay the bill. We are fighting because we refuse to be a lost generation," she said. Many young protesters said they felt their concerns were not being heard by politicians. /Pierre-Philippe Marcou/AFP

Many young protesters said they felt their concerns were not being heard by politicians. /Pierre-Philippe Marcou/AFP

When asked what fuels their anger, young protesters raise the same issues. Youth unemployment in Spain, at more than 40 percent, is the highest in the European Union, and almost three times the EU average of 17.6 percent.

Jobs and opportunities that are open and offered to young people are not often jobs for life, but come in the form of internships or short-term contracts.

In addition, the cost of renting has soared in recent years, particularly in sought-after cities such as Madrid and Barcelona, magnifying young people's concerns about the cost of living.

The pandemic has only added to their problems, with young people often blamed for the increase in infections in a country that has been hard hit by the coronavirus.

For many young people, these confounded issues that have been bubbling beneath the surface for a long time, made them take to the streets in protest.

"When you take the future away from young people, then they have nothing more to lose and then the things that we have seen these days happen," Anna Clua, spokesperson for the student union Paisos Catalans, told AFP.

"We have been making peaceful demands for a long time, both to the State and to the government of the Generalitat, and also to make ourselves visible at the international level, but we note that this does not give any answer. And therefore, we must continue to fight until the foundations of our demands are heard," another protester, law student Mar Ampurdanes, said. 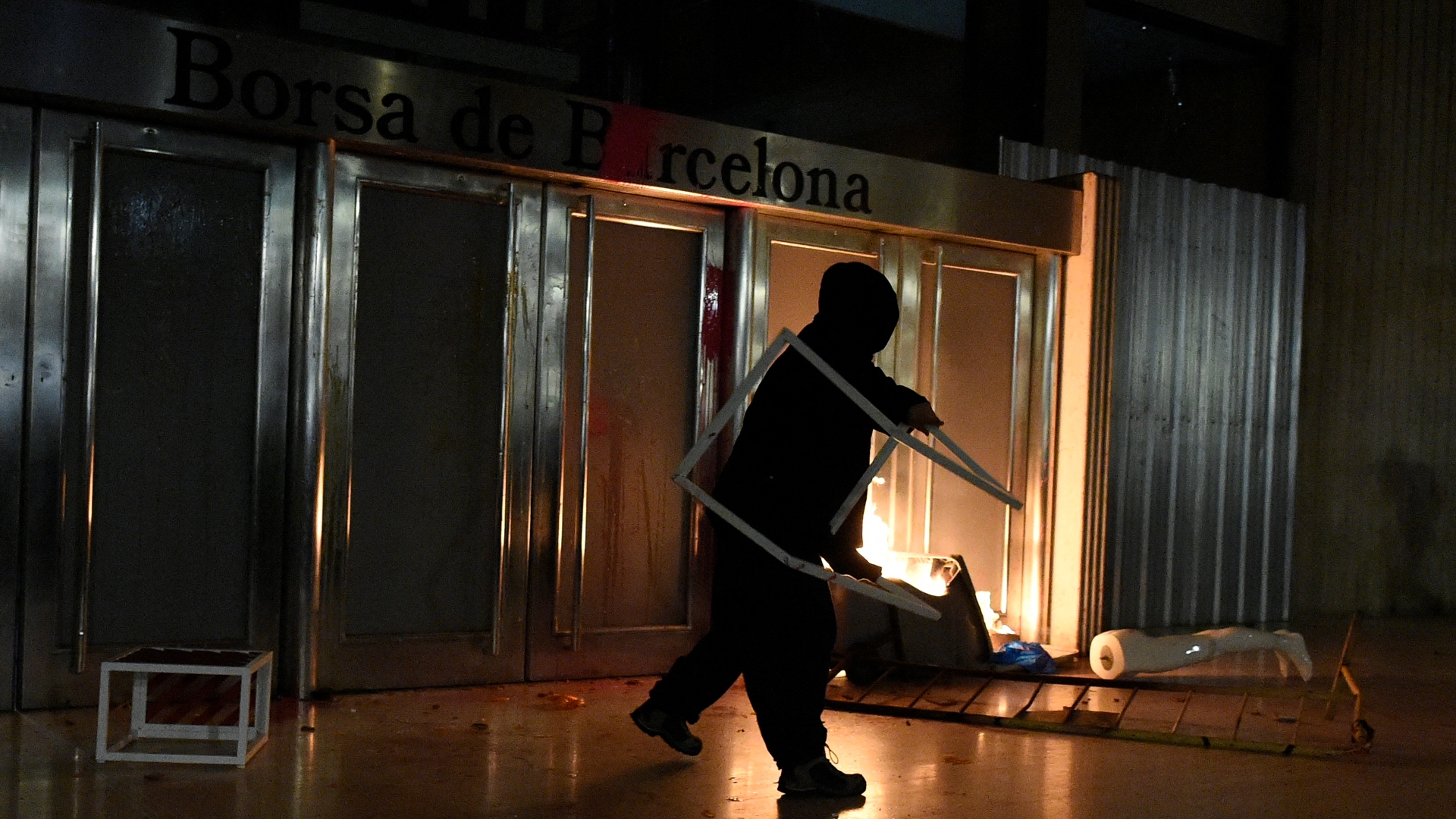 Many people criticized the violence and looting that stemmed from some protests and pleaded for calm. /Josep Lago/AFP

Many people criticized the violence and looting that stemmed from some protests and pleaded for calm. /Josep Lago/AFP

But the sight of burning barricades and smashed store windows on streets across several Spanish cities has not gone down well with everyone.

In Barcelona alone, five nights of trashed shops and burned containers has caused $1.09 million in damages, the city council said.

"Apart from the economic damage, we have suffered damage to the image of Barcelona as a welcoming and peaceful city," Luis Sans, president of the Association of Friends of Passeig de Gracia, told El Pais newspaper.

Some locals had also resorted to trying to put out fires using hoses from their balconies and cleaning up the streets after protesters.

Yet, some remain understanding. "I don't agree with violence, but there is a part of me that understands it," Raquel Cadenes, a 41-year-old Barcelona teacher told AFP. "It reflects what people are going through, tiredness ... We have been locked up for so long that when there is a demonstration, it is normal that there are some problems, that everything is a little more exaggerated."