Download
Would you feed this to your child for a week?
Catherine Newman 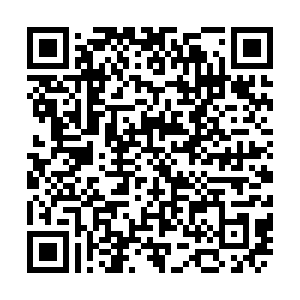 Debate has raged in the UK about the free school meals provided to children of low-income families during lockdown after a mother and Twitter user (@RoadsideMum) posted a photo of a UK government-outsourced food package she had received to feed her children.

Posting the photo below, the parent – who prefers to remain anonymous – tweeted "#FreeSchoolMeals bag for 10 days: 2 days jacket potato with beans, 8 single cheese sandwiches, 2 days carrots, 3 days apples, 2 days Soreen, 3 days frubes, spare pasta & tomato. Will need mayo for pasta salad. Issued instead of £30 vouchers. I could do more with £30 to be honest." 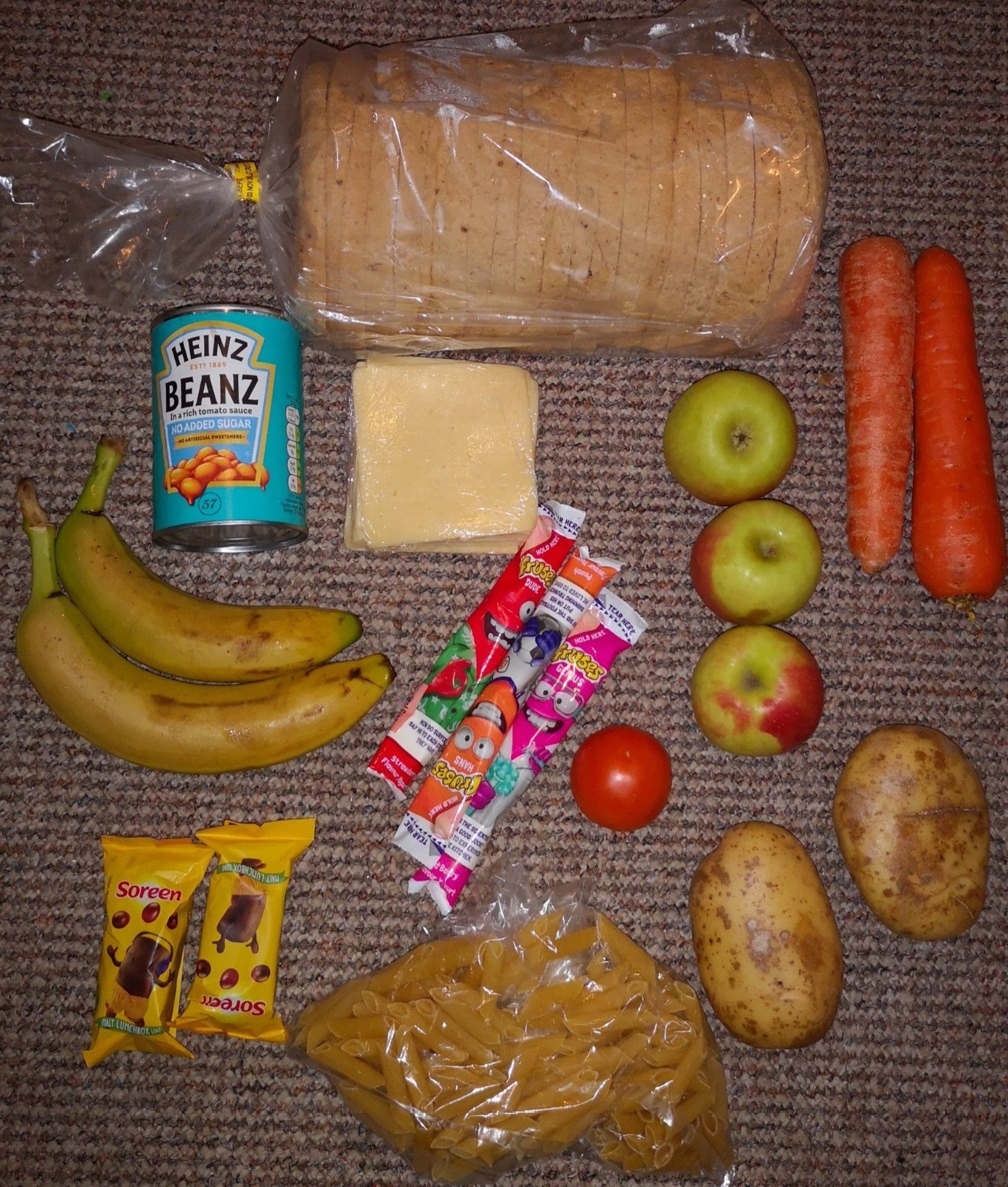 The original photograph from a mother which shows the food that she was given from Chartwells. /@RoadsideMum on Twitter

The original photograph from a mother which shows the food that she was given from Chartwells. /@RoadsideMum on Twitter

The photo soon garnered attention as people expressed their shock and outrage at the food that had been supplied by UK catering firm Chartwells for the mother to feed her children. It also prompted other parents to share photos of the food packages they had received.

So, what types of lunches could a parent make for their child from this food?

Chartwells said the food photographed cost £10.50 ($14.38) and was to cover five days worth of lunches. In order to find out what kinds of midday meals could be made with the food provided, CGTN Europe purchased the same items, which cost £10.75 ($14.73), to last five days. These are five lunches that we prepared for one child.

CLICK RIGHT ON THE PICTURES BELOW TO LOOK THROUGH THE GALLERY 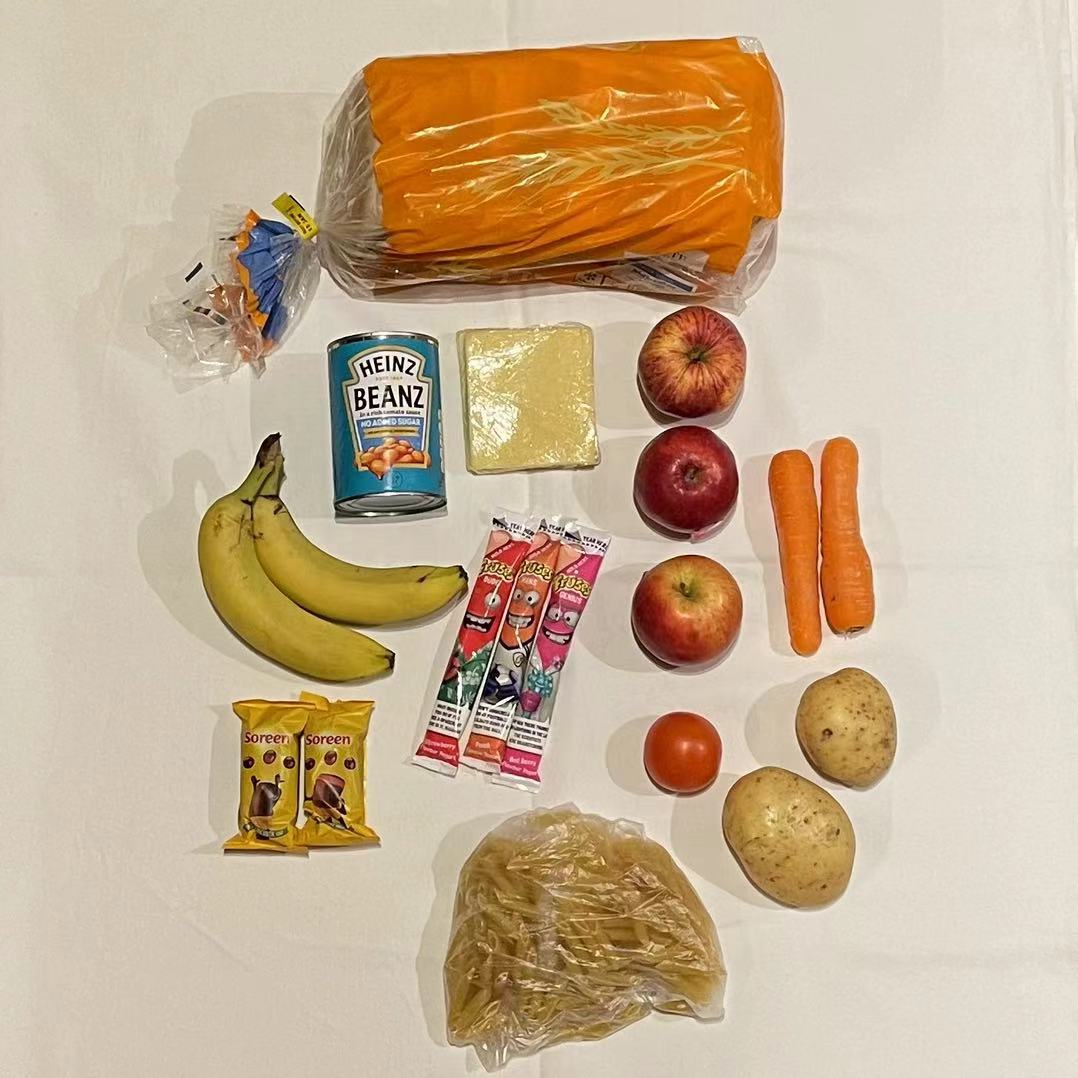 CGTN Europe's recreation of the photo with the same food and quantities. /CGTN Europe

CGTN Europe's recreation of the photo with the same food and quantities. /CGTN Europe 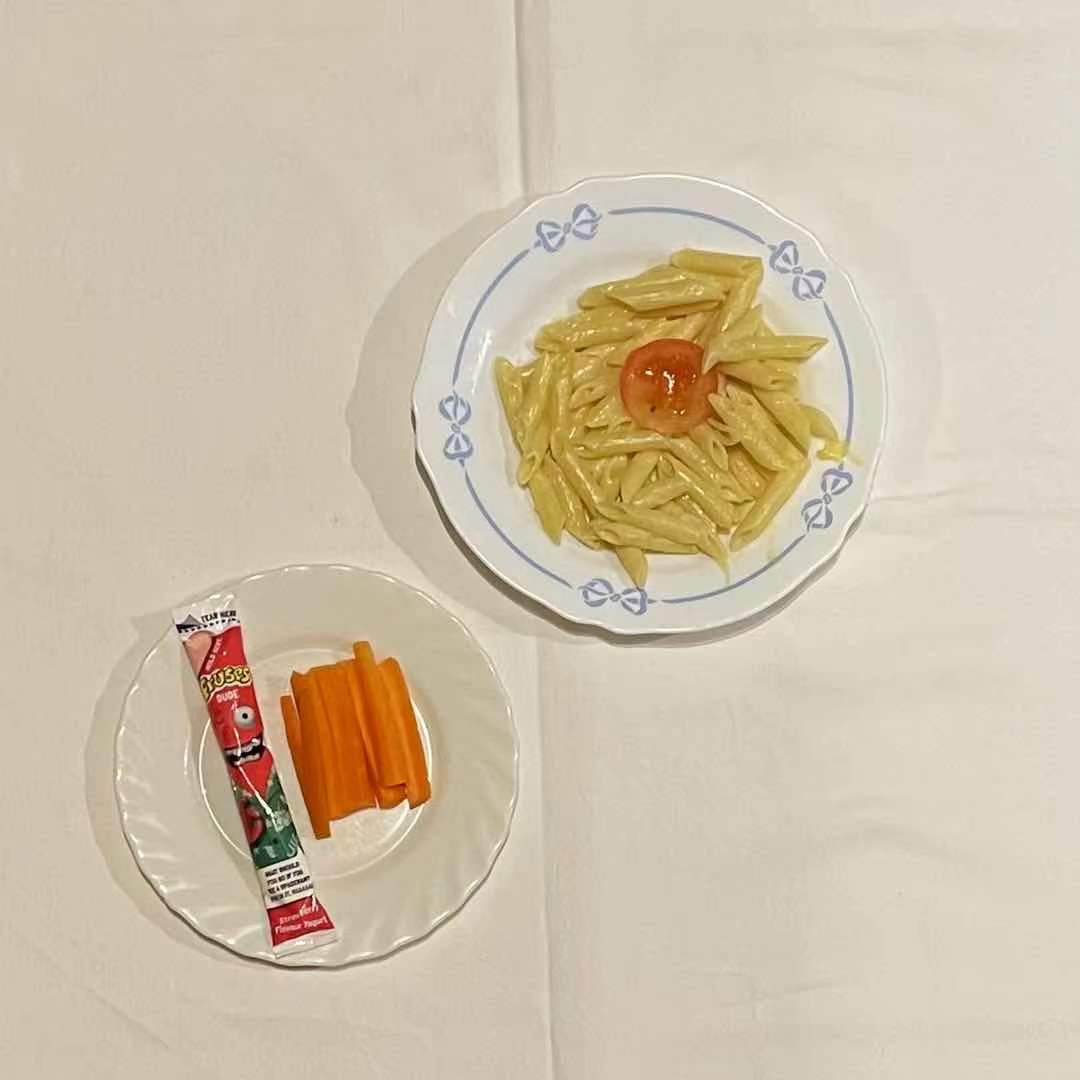 Lunch one: Cheese pasta, a Frube (yoghurt) and carrot sticks.

Lunch one: Cheese pasta, a Frube (yoghurt) and carrot sticks. 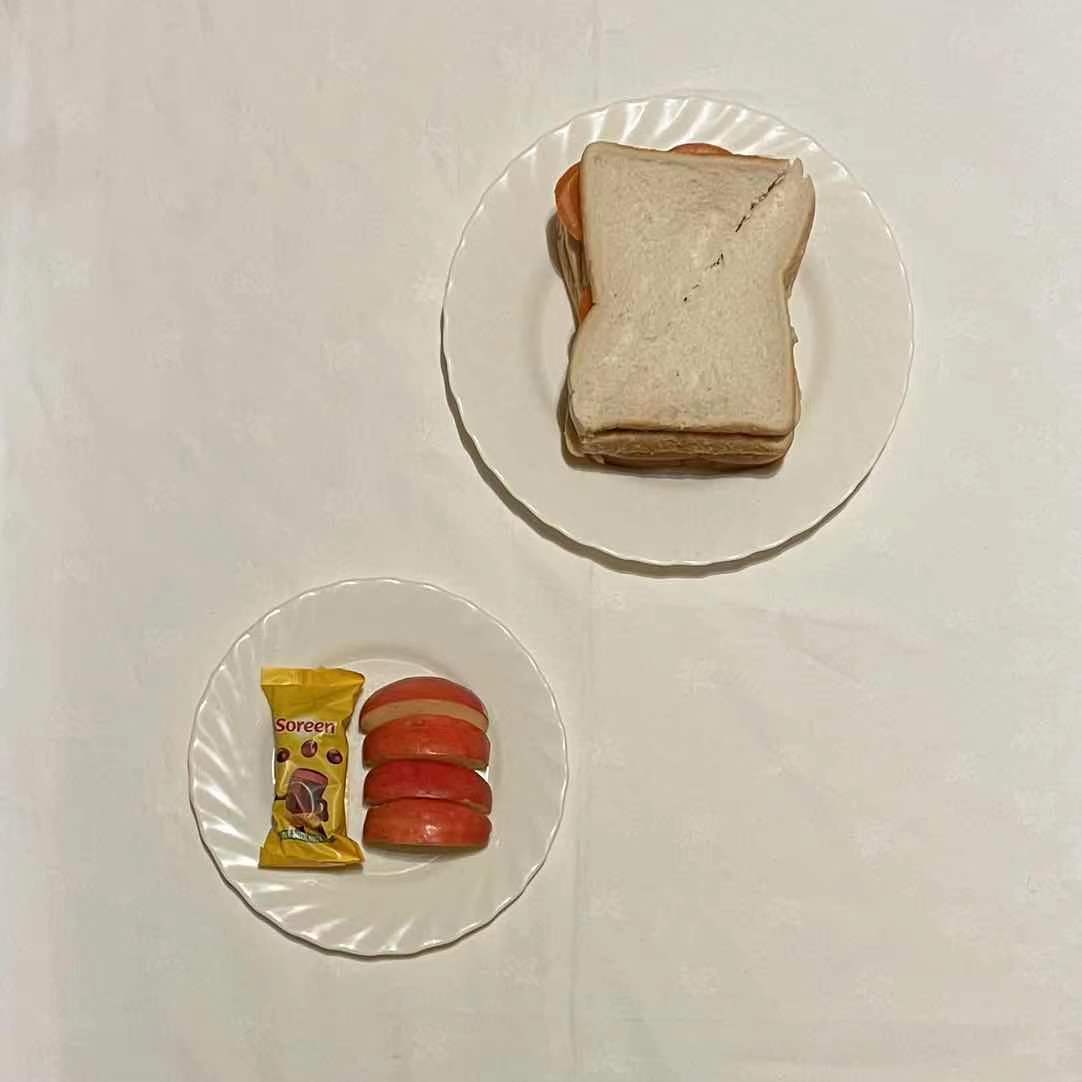 Lunch two: A cheese and tomato sandwich and a banana sandwich (four slices of bread), a Soreen (malt loaf) bar and apple pieces.

Lunch two: A cheese and tomato sandwich and a banana sandwich (four slices of bread), a Soreen (malt loaf) bar and apple pieces. 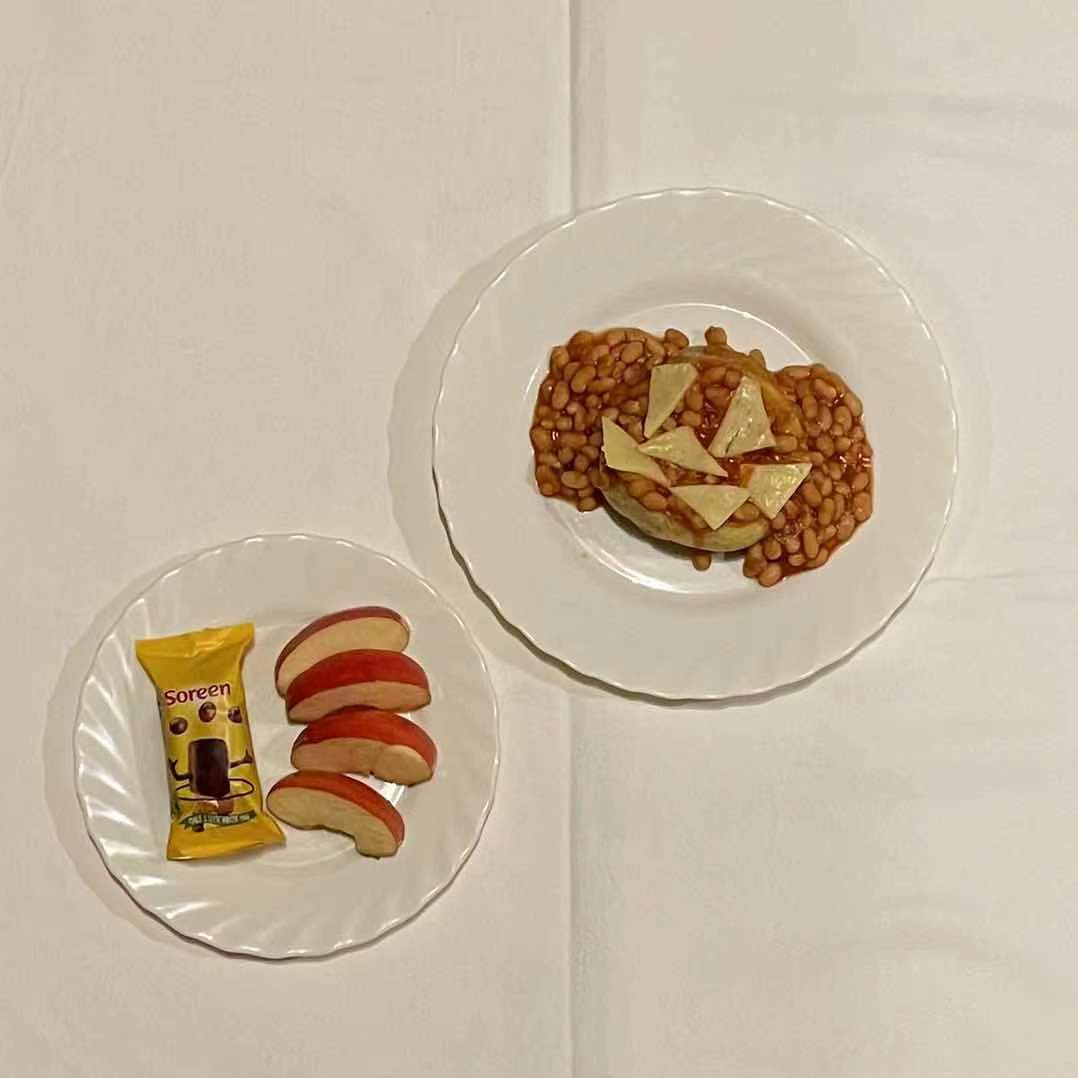 Lunch three: A jacket potato with beans and cheese, a Soreen bar and apple pieces.

Lunch three: A jacket potato with beans and cheese, a Soreen bar and apple pieces. 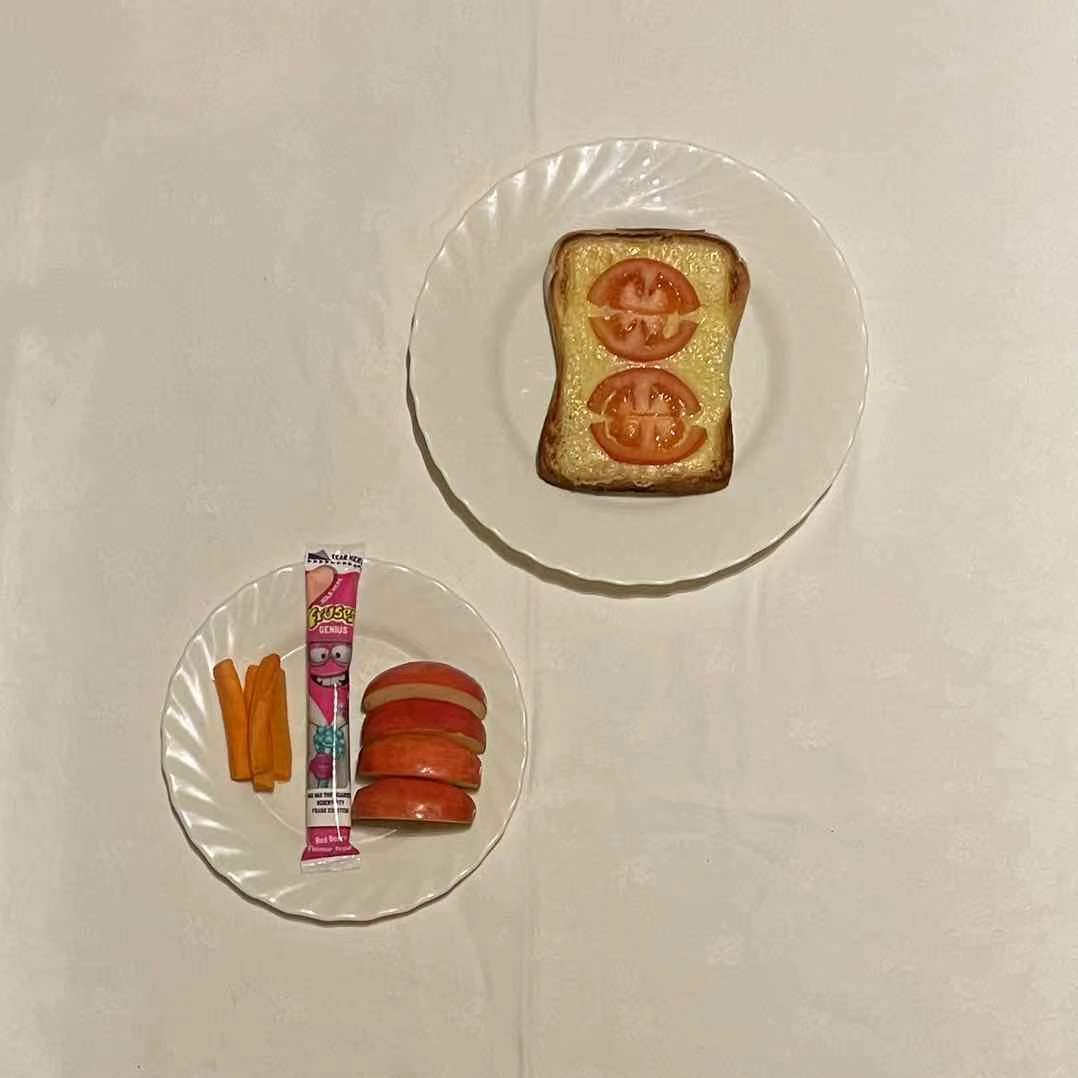 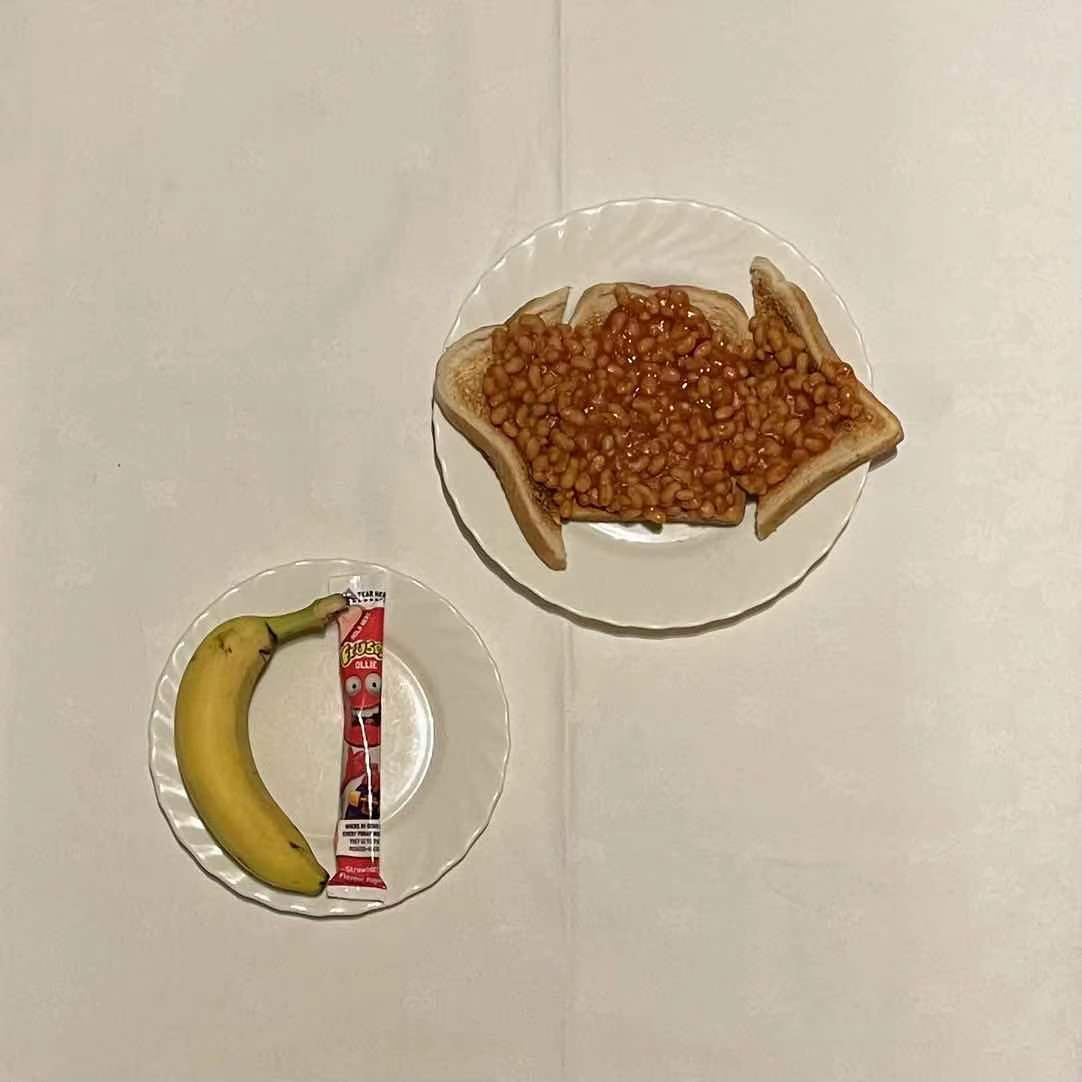 Lunch five: Beans on toast, bananas and a Frube.

Lunch five: Beans on toast, bananas and a Frube.

The UK government will relaunch its national free school meals food voucher from next week. The scheme, which ran through the first lockdown and various school holidays last year, offers supermarket vouchers worth £15 ($20.55) a week for each child eligible for free school meals.

Guidance issued originally told schools to work with caterers under a "food parcel first approach" to replace free school meals for children at home, issuing vouchers only where this was not possible. The new guidance says schools now "have the freedom to decide on the best approach for their pupils and have a range of options which include lunch parcels, local vouchers or the... national voucher scheme."

Since the uproar in response to the photos posted on social media, Chartwells has also said it will be providing free breakfasts.

There have also been questions amongst the public as to whether companies involved in issuing food parcels could have been profiting from the UK government scheme. It emerged on Wednesday that Compass group and its subsidiary Chartwells have links to the Conservative Party. Electoral commission records show that Paul Walsh, chairman of Compass Group until stepping down last month, had contributed more than £10,000 ($13,700) towards the Conservative Party.

Addressing the alleged cost of the food parcel and its contents, the catering firm posted several statements to Twitter in response, one of which read "We have had time to investigate the picture circulated on Twitter. For clarity, this shows five days of free school lunches (not ten days) and the charge for food, packaging and distribution was actually £10.50 and not £30 as suggested. However, in our efforts to provide thousands of parcels a week at extremely short notice we are very sorry the quantity has fallen short in this instance."

The statement continued: "We are further enhancing our food parcels following the Department for Education's additional allowance of £3.50 [$4.79] per week per child in line with nutritional guidelines, in addition we welcome the DofE [Department of Education] procurement notice for schools issued today."

The statement also went on to thank several people for their efforts with regards to this food deprivation, including Marcus Rashford, an English professional football player who campaigns against food poverty, particularly with regards to children. He tweeted his response to the food package photos saying they were "just not good enough."

The 23-year-old later posted a photo on Twitter with a caption which reads "These children matter. These children are the future of the country. They are not just another statistic. And for as long as they don't have a voice, they will have mine."

Despite the attention this social issue has received, the most recent government on Thursday guidance says that schools in England don't have to provide free school meals during the upcoming February half-term, which is when children would normally have a week off from school.