· The World Health Organization (WHO) has confirmed the COVID-19 variant first found in Britain has spread to 50 countries, while the second new variant first identified in South Africa has been found in 20 regions. It also highlighted a third new "variant of concern" found in Japan needs further research and it may affect immune response.

· Russian President Vladimir Putin has asked officials to expand the country's coronavirus vaccination program from next week, hailing the homemade Sputnik V vaccine as the "best in the world."

· COVID-19 vaccination appointments will be made available 24 hours a day "as soon as we can," said UK Prime Minister Boris Johnson. Another 1,564 people have died in the UK – the highest daily total reported since the pandemic began, taking the total number of deaths to 84,767.

· Scotland will enforce tighter restrictions from January 16, with customers no longer allowed inside a takeaway restaurant and click-and-collect services being offered by shops selling essential goods.

· Switzerland has announced new COVID-19 restrictions to "drastically" reduce contact between people, amid concerns about a surge in cases due to new variants of the virus.The measures include mandatory working from home while all shops other than those selling basic provisions will be closed.

· Norway will introduce mandatory COVID-19 testing at its borders for all those entering the country. Those who fail to comply will be fined $2,300.

· Sweden has recorded 5,337 new cases and 167 new deaths, according to its health agency figures. The country's death toll stands at 9,834, with its death rate per capita significantly higher than the other Nordic countries.

· The authorities in the Spanish regions of Galicia, La Rioja and Cantabria have tightened restrictions as the national infection rate continues to increase, following relaxed rules over Christmas.

· Italy's health minister has announced a partial reopening of museums in less-infected "yellow" regions, while "respecting all social distancing measures." Restrictions are due to be extended in most of country's other regions.

· The Vatican has launched its vaccination program, although there has been no confirmation when Pope Francis will be given the shot.

· The women's Six Nations rugby tournament has been postponed due to COVID-19, while the men's tournament will be held as scheduled.

· Germany has recorded its first case of the COVID-19 variant first detected in South Africa, in a member of a family that has returned from their stay in the country. Chancellor Angela Merkel has said the current lockdown measures could last until early April.

· Spain has extended a ban on arrivals from the UK by another two weeks due to concerns over the variant detected in the UK.

· The Netherlands has set up its first mass testing center for COVID-19 in the town of Bergschenoek, following a cluster of 30 cases in an elementary school of the new variant first detected in the UK. 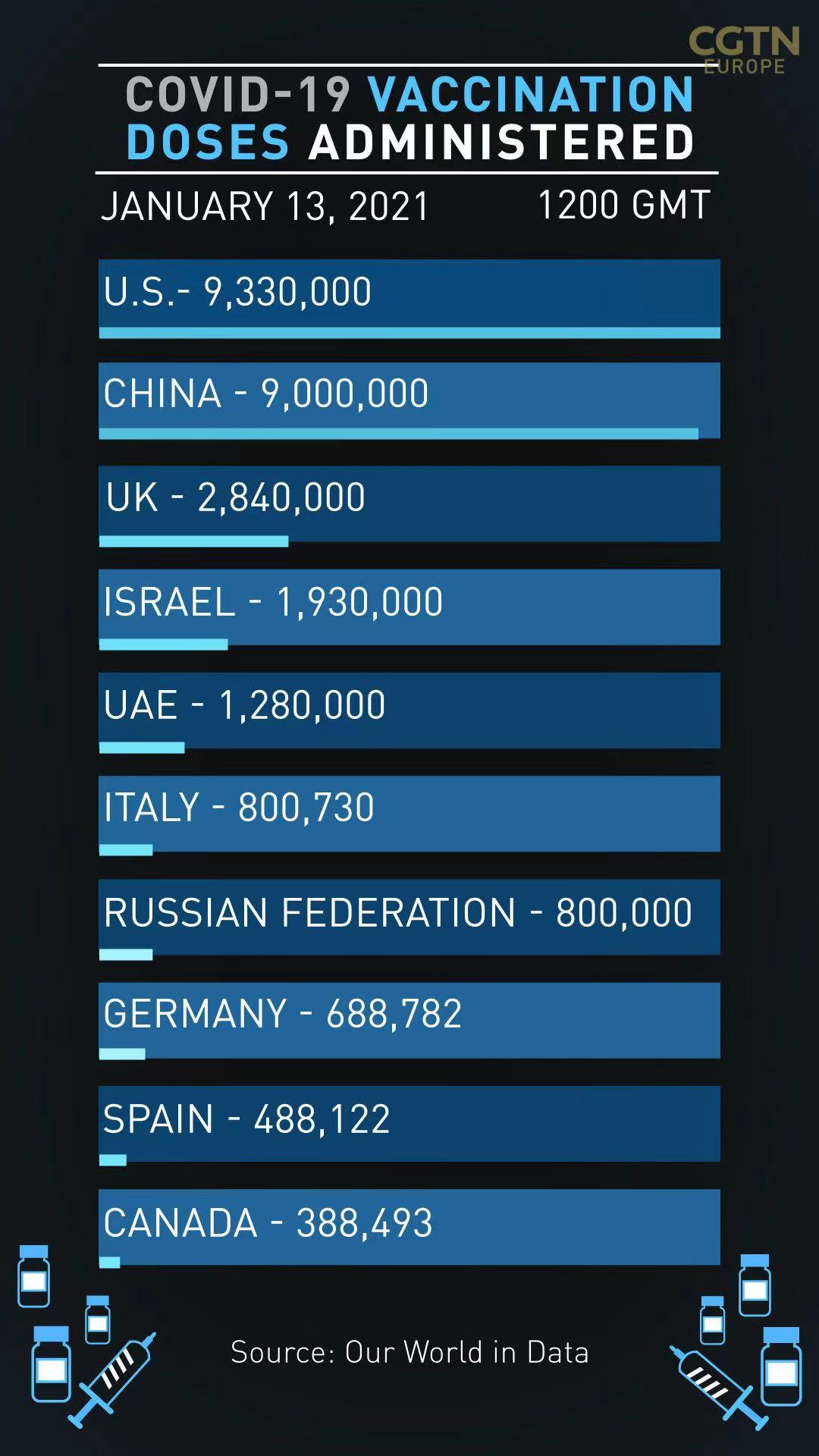 It is a day of committees on COVID-19 in the UK parliament today. Education Secretary Gavin Williamson and Vaccines Minister Nadhim Zahawi take questions in the morning, there will be Prime Minister's Questions at midday, and then at 3.30 p.m. Boris Johnson faces a special committee of 15 senior MPs.

There are still concerns in Downing Street about the pace of the vaccine roll-out and the government is today expected to announce approval for a pilot for a new 24-hour, seven-day vaccination center.

The UK's National Health Service is considering moving some patients into hotels to lessen the pressure on hospitals.

Large-scale trials for a new drug treatment for COVID-19 have started in the UK. Developed at Southampton University, reports suggest the drug, interferon beta, has shown promising results in early testing.

The number of new daily infections in Belgium increased 30 percent in the past week compared to the week before as tens of thousands returned to the country after the Christmas break.

The resurgence has prompted the government to extend its COVID-19 fighting measures until March 1, including the closure of hair salons, a night-time curfew and suspension of social bubbles.

"A new resurgence of the virus due to a premature relaxation of the measures would be avoided," a ministerial decree announcing the extension said.

The country has been in varying states of lockdown since October. If the infection and hospitalization numbers dramatically improve, the government says the restrictions could be eased before March. A total of 190,000 people have been vaccinated in France since it started its vaccination campaign in late December. /Jean-Christophe Verhaegen/AFP

A total of 190,000 people have been vaccinated in France since it started its vaccination campaign in late December. /Jean-Christophe Verhaegen/AFP

The head of France's Scientific Council has warned that there could be a surge in cases of the COVID-19 variant first identified in the UK, if "steps are not taken.”

This new variant is "going to complicate things," says Jean-Francois Delfraissy, who has recommended leaving schools open but with reinforced health measures. There have been 11 confirmed cases of this variant in the Paris region, meanwhile, only a few people have tested positive for the variant originally detected in South Africa.

A 'health defense council' is taking place this morning, chaired by President Emmanuel Macron, to discuss the health situation in the country.

The country's senior ministers and the president will debate maintaining or tightening the measures in place in France – non-essential shops are open but bars, restaurants, theatres and sports halls are closed and a nationwide curfew from 8 p.m. to 6 a.m. is in force.

A total of 190,000 people have been vaccinated in France since it started its vaccination campaign in late December.

Italy is heading towards a political crisis on Wednesday with the coalition government on the verge of collapse. It follows infighting over how to use around $250 billion from the EU recovery fund between Prime Minister Giuseppe Conte and one of his minority coalition partners, Italia Viva, led by former Premier Matteo Renzi.

On Tuesday night, the cabinet met to approve Italy's economic recovery plan, it passed despite the two ministers from Italia Viva abstaining. Renzi could take his party, which despite its small size holds the balance for a majority in both of Italy's chambers, into opposition.

The impending crisis comes at a time when the country's death toll from COVID-19 stands at almost 80,000 people, the highest number of deaths in any EU nation.