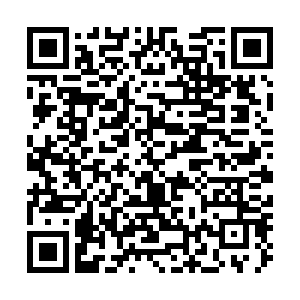 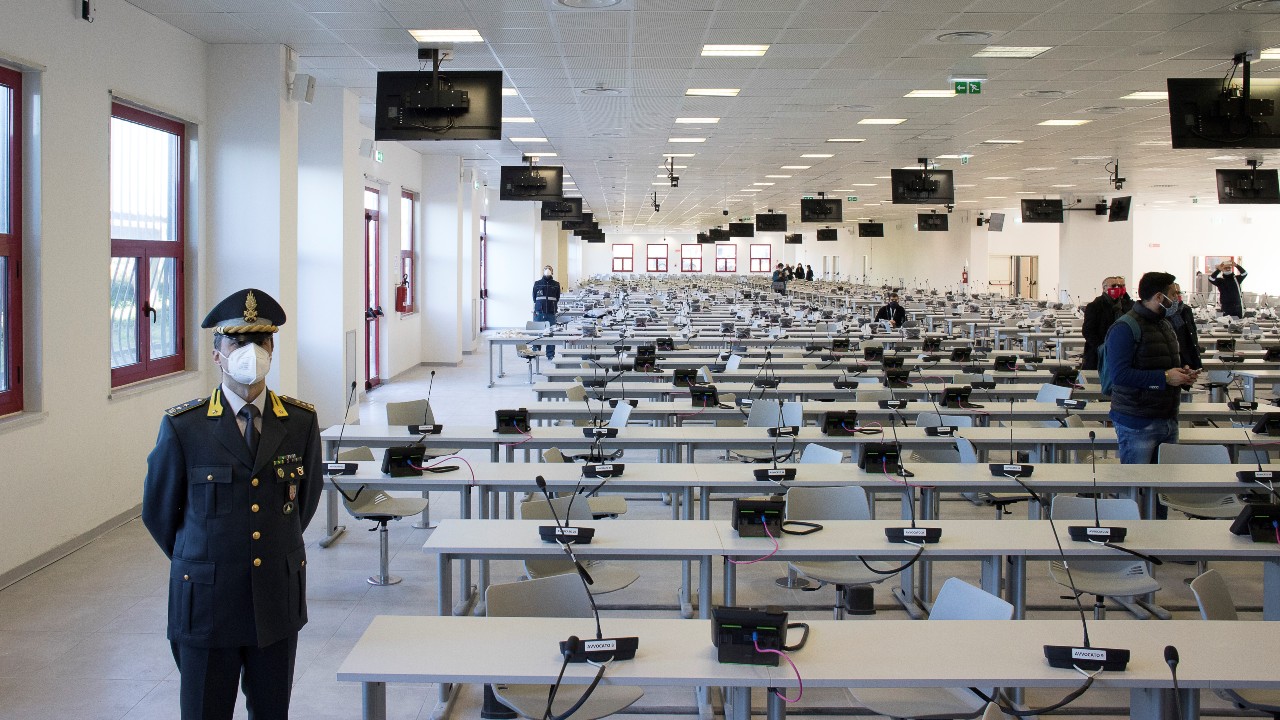 Inside the 1,000-capacity courtroom in Calabria, Italy where a mafia 'maxi-trial' involving 350 defendants has begun. /Gianluca Chininea/AFP

Inside the 1,000-capacity courtroom in Calabria, Italy where a mafia 'maxi-trial' involving 350 defendants has begun. /Gianluca Chininea/AFP

The largest anti-mafia trial in Italy for more than 30 years opened on Wednesday inside an enormous converted courtroom, where the defendants will sit in cages.

In the dock are more than 350 alleged members of the mafia plus politicians, lawyers, businessmen and others accused of enabling them.

A large warehouse has been converted into a 1,000-capacity courtroom to host the so-called 'maxi-trial' in the southern Calabrian town of Lamezia Terme, in the heart of 'Ndrangheta territory. 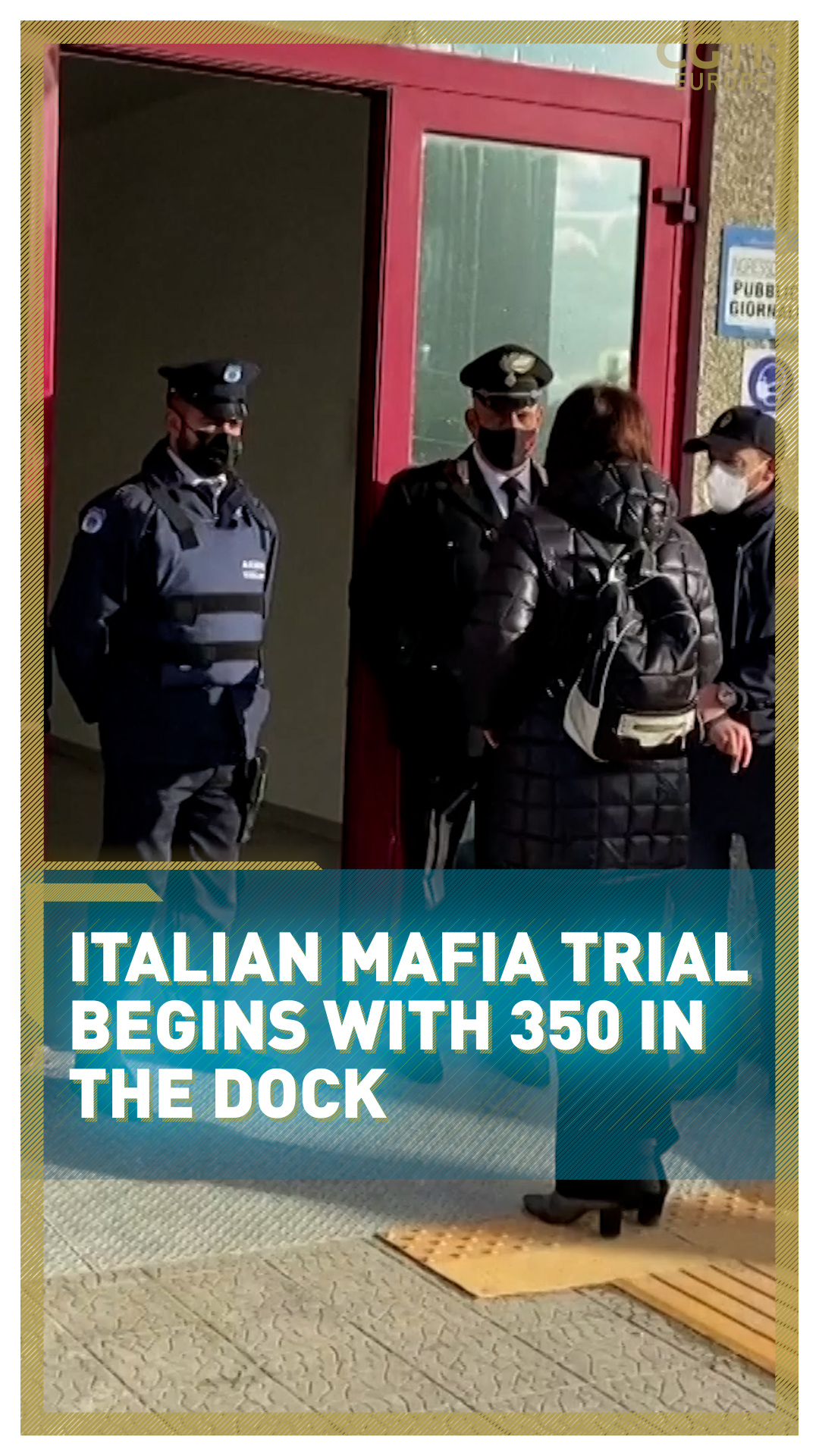 Prosecutors are seeking to prove a web of crimes, both violent and white-collar, dating back to the 1990s. These include murder, drug trafficking, extortion, money laundering and abuse of office. Due to COVID-19 restrictions, many of the defendants will attend via videolink from prison during the first hearings.

"I have known the mafia since I was a child because I was hitchhiking to school and I often saw dead bodies on the road," he told AFP ahead of the trial.

"When I was a child I was at school with the children of mafia bosses," he said. "The kids I played with then became mobsters and then became drug traffickers. That's why I'm familiar with the criminal philosophy, the way of thinking of the 'Ndrangheta members, and this helps in my work." 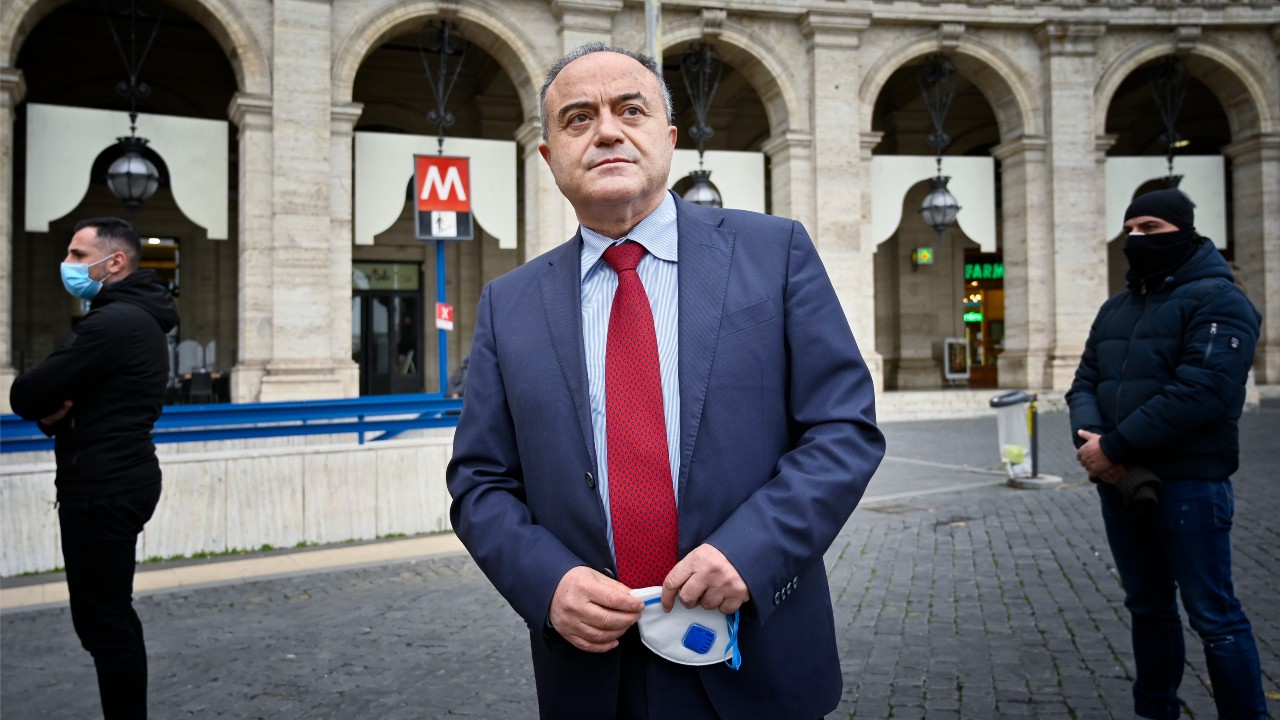 The 'Ndrangheta has a global reach, controlling the bulk of cocaine flowing into Europe and surpassing Sicily's Cosa Nostra as Italy's most fearsome crime syndicate.

Maxi-trials, which include scores of defendants and countless charges, are seen as the best judicial resource against the country's various organized crime groups.

This trial, codenamed Rinascita ('rebirth'), will take place six days a week and is expected to last at least a year. It features 355 defendants, 913 prosecution witnesses, and an unprecedented number of collaborators, given the close family ties within the 'Ndrangheta that discourage helping the authorities.

It will draw on 24,000 hours of intercepted conversations and focuses on one family, the Mancuso group, and its network of associates who control the Vibo Valentia area of Calabria. 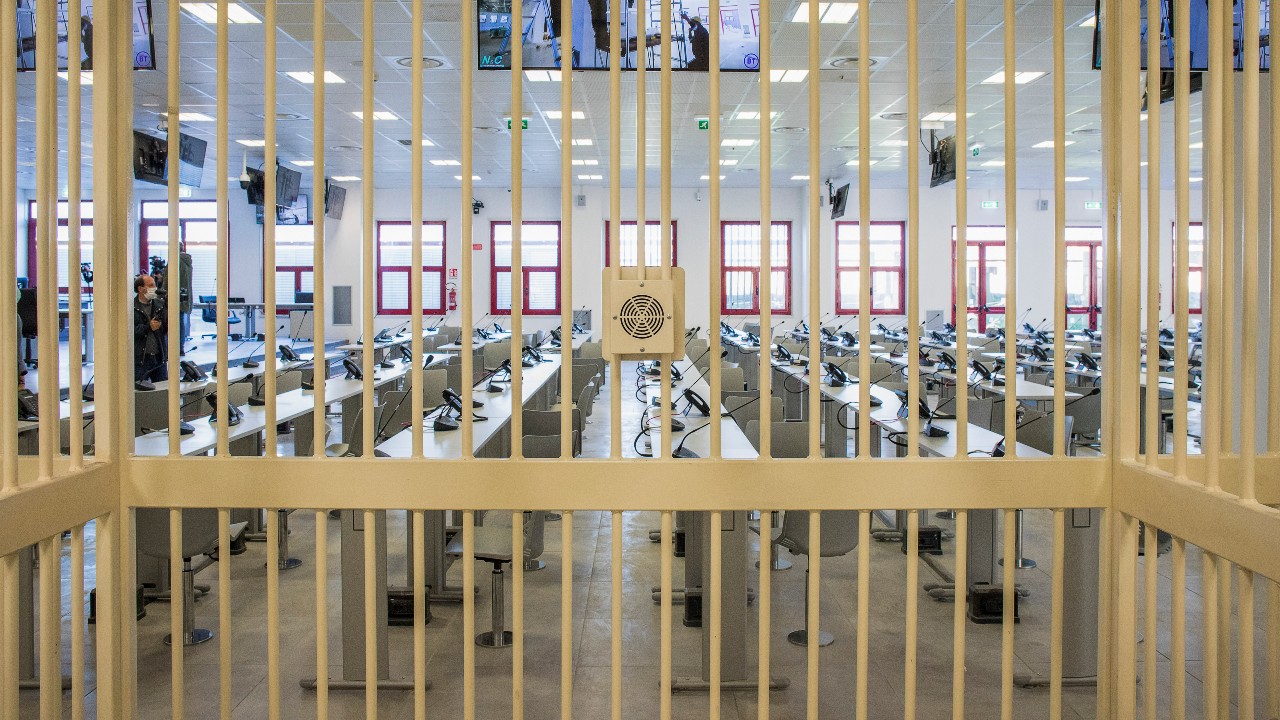 View from inside one of the cages where defendants in the 'maxi-trial' will sit, socially distanced, during proceedings. /Gianluca Chininea/AFP

View from inside one of the cages where defendants in the 'maxi-trial' will sit, socially distanced, during proceedings. /Gianluca Chininea/AFP

Defendants include a high number of non-clan members, including an ex-parliamentarian, a high-ranking police official, mayors and other public servants and businessmen.

Most of those accused were arrested in December 2019 after a three-year investigation across 11 Italian regions. Arrests were also made in Switzerland and Germany.

The highest-profile defendant is the alleged boss Luigi Mancuso, also known as 'The Uncle.' One star witness is Mancuso's nephew Emanuele who will testify against him after accepting police protection.

Other defendants are believed to go by nicknames such as 'The Wolf,' 'Fatty' and 'Blondie.'

The 'Ndrangheta generates more than $60 billion per year, according to Gratteri, who called the trial "a cornerstone in the building of a wall against the mafias in Italy."

Gratteri is often compared with Giovanni Falcone and Paolo Borsellino, star prosecutors who worked on Italy's first mass trial against the Mafia in 1986-7. The trial led to hundreds of convictions and dealt a major blow to Sicily's Cosa Nostra, but both Falcone and Borsellino were killed by mobsters in retribution.

"The road ahead is still very long, but we mustn't give up because there are thousands of people who believe in us. We can't let them down," Gratteri told Reuters.