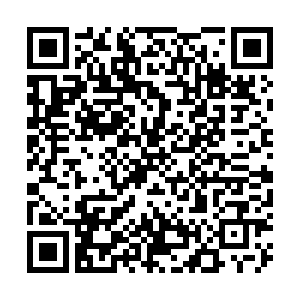 The One Planet Summit, the first major climate summit of 2021, was held virtually on Monday due to the COVID-19 pandemic, bringing together around 30 leaders, government officials and business heads to discuss this year's theme of biodiversity conservation.

The summit, chaired by France and backed by the United Nations and the World Bank, focused on the importance of the world's biodiversity.

UN Secretary-General Antonio Guterres, speaking via a video link from New York, called for greater efforts to protect biodiversity and step up climate action. "Until now, we have been destroying our planet, abusing it as if we had a spare one," Guterres said.

"We have been poisoning air, land and water and filling our oceans with plastic. And now nature is striking back: temperatures are reaching record highs, biodiversity is collapsing, deserts are spreading, fires, floods and hurricanes are more frequent and extreme," he added.

Guterres also noted that a raft of biodiversity targets set a decade ago by the world's nations have all been badly missed, but said that the socioeconomic impact of the COVID-19 pandemic is a wake-up call and a chance to recover and rebuild without reverting to the "old normal."

But he added that "biodiversity is facing a financial gap of $711 billion per year until 2030." 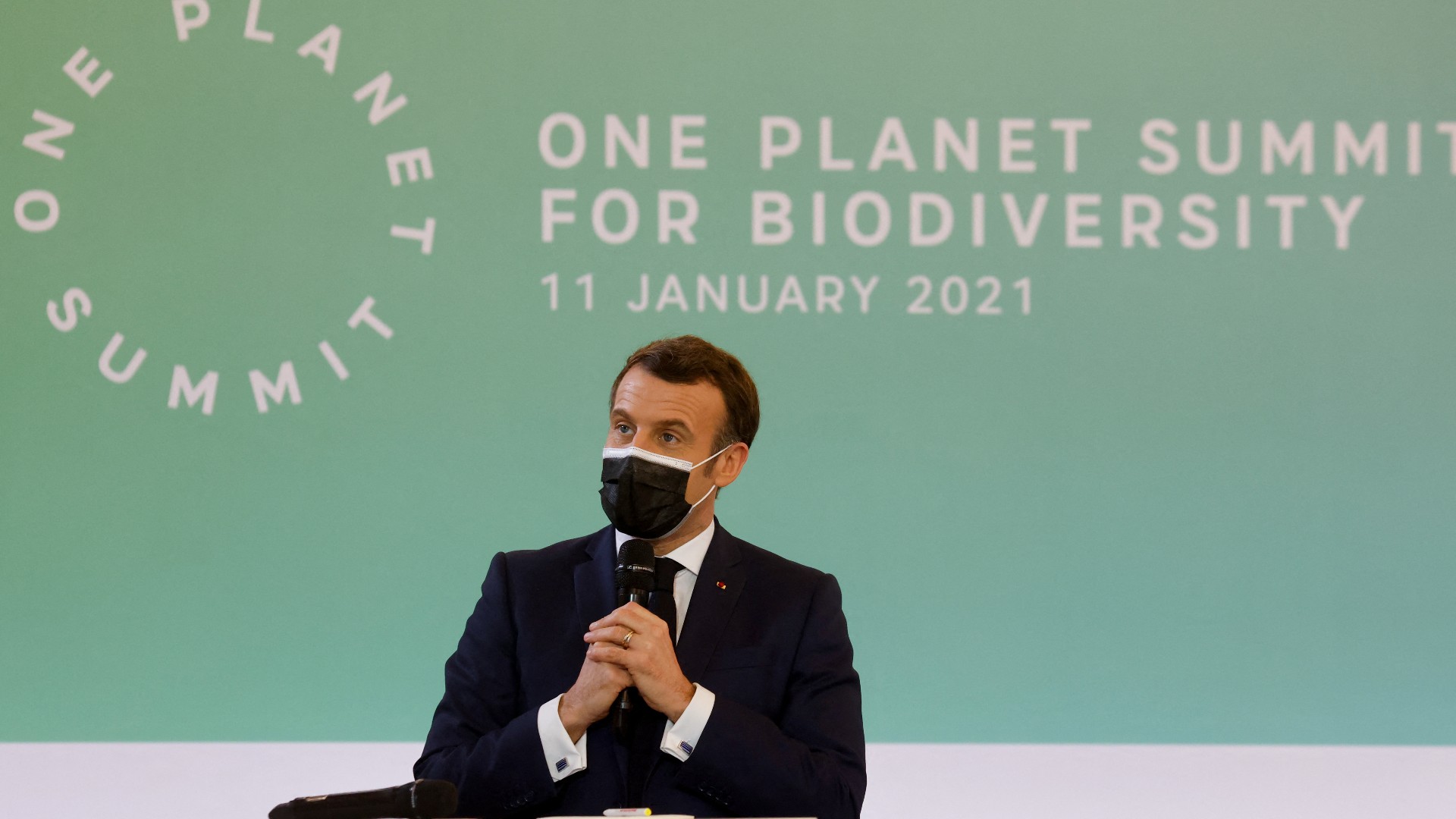 Charting the course for a green recovery

France's President Emmanuel Macron said economic recovery from the coronavirus pandemic must be green and sustainable, while adding that a potential silver lining was the opportunity to create 190 million jobs by 2030 in the sustainable sector.

"We can move the dial if we decide to do so. Everyone has felt ... human activity as we know it temporarily grind to a halt, how nature reasserted its rights on our coastlines and in the middle of our cities. And this feeling is by no means trivial," Macron said.

"It hammered home the reality of the situation that we forget all too often: our future and our planet depends on what we do here and now," he added.

The aim of the meeting was to chart a path for the coming year in terms of joint climate action and biodiversity conservation.

More than 50 nations supported a plan to create protected areas covering 30 percent of global lands and oceans. The so-called "30-30" initiative could become the cornerstone of a critical biodiversity meeting in Kunming, China, postponed last year due to the coronavirus pandemic.

China is expected later this year to host the 15th meeting of the Conference of the Parties to the Convention on Biological Diversity (COP15) in Kunming, which will formulate the post-2020 biodiversity framework to map out a blueprint for biodiversity conservation in the next 10 years.

Speaking at the summit via video link from Beijing, China's Vice-Premier Han Zheng called for global cooperation to protect the world's biodiversity.

"Preserving biodiversity is a global challenge that needs the international community to work together. This year, against the backdrop of the COVID-19 pandemic, we must be innovative in our discussions," he said.

"We must strengthen communication and pull in the same direction. We must accelerate talks on the post-2020 global biodiversity framework," he added.

Also taking place this year is the United Nations climate change conference, or COP 26, which will be hosted by the UK in Glasgow in November.

"Obviously it is right to focus on climate change," said UK Prime Minister Boris Johnson. "But we won't achieve a real balance with our planet unless we protect nature as well," he added, speaking from London. 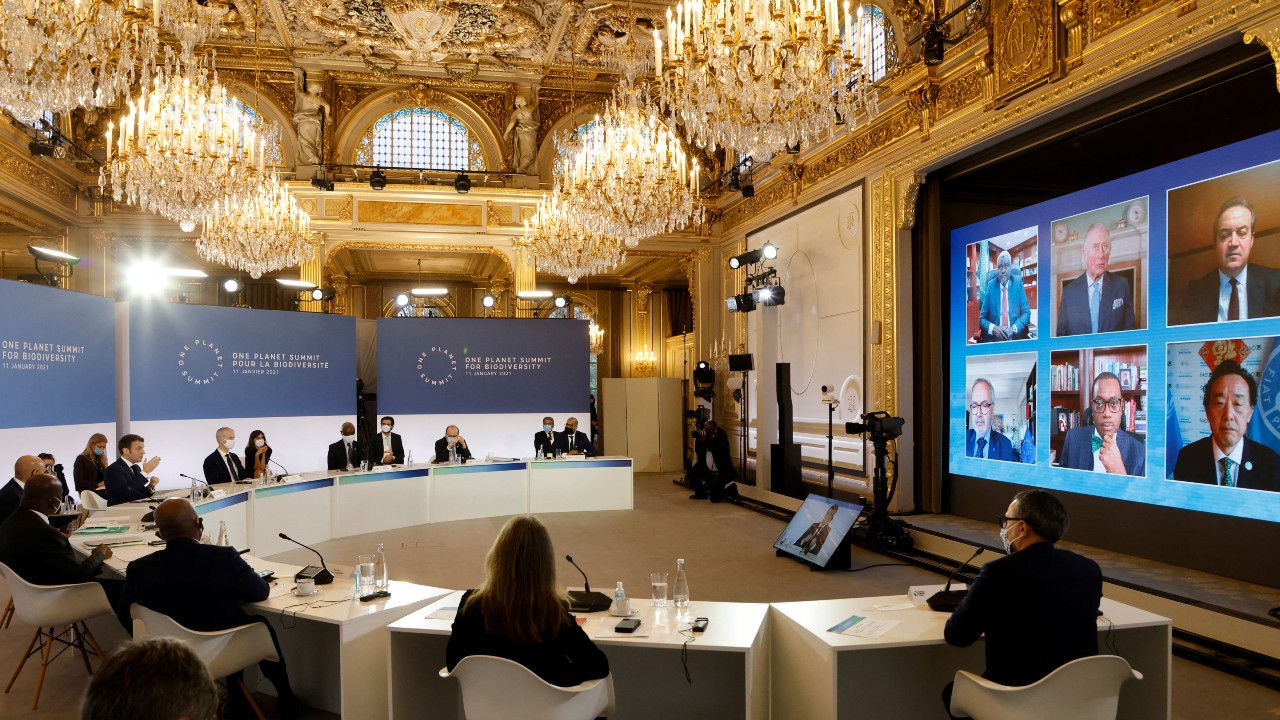 The One Planet Summit virtually brought together around 30 political leaders and heads of business to discuss the theme of protecting biodiversity. /Ludovic Marin/Pool/AFP

The One Planet Summit virtually brought together around 30 political leaders and heads of business to discuss the theme of protecting biodiversity. /Ludovic Marin/Pool/AFP

But while leaders spoke strongly during the summit on the need for action on climate change and in particular protecting the planet's biodiversity, some environmentalists saw it as yet another meeting of empty promises and not enough action as the planet faces a mass-extinction event, according to scientists.

Swedish climate activist Greta Thunberg was one of them, throwing cold water on the Paris meeting in a tweet, under the heading "LIVE from #OnePlanetSummit".

Adding: "In 2010 our leaders signed 'ambitious goals to protect wildlife and ecosystems.' By 2021 they'd failed on every single one. Each day they choose not to act. Instead they sign more 'ambitious' non-binding future goals while passing policy locking in destructive business as usual."