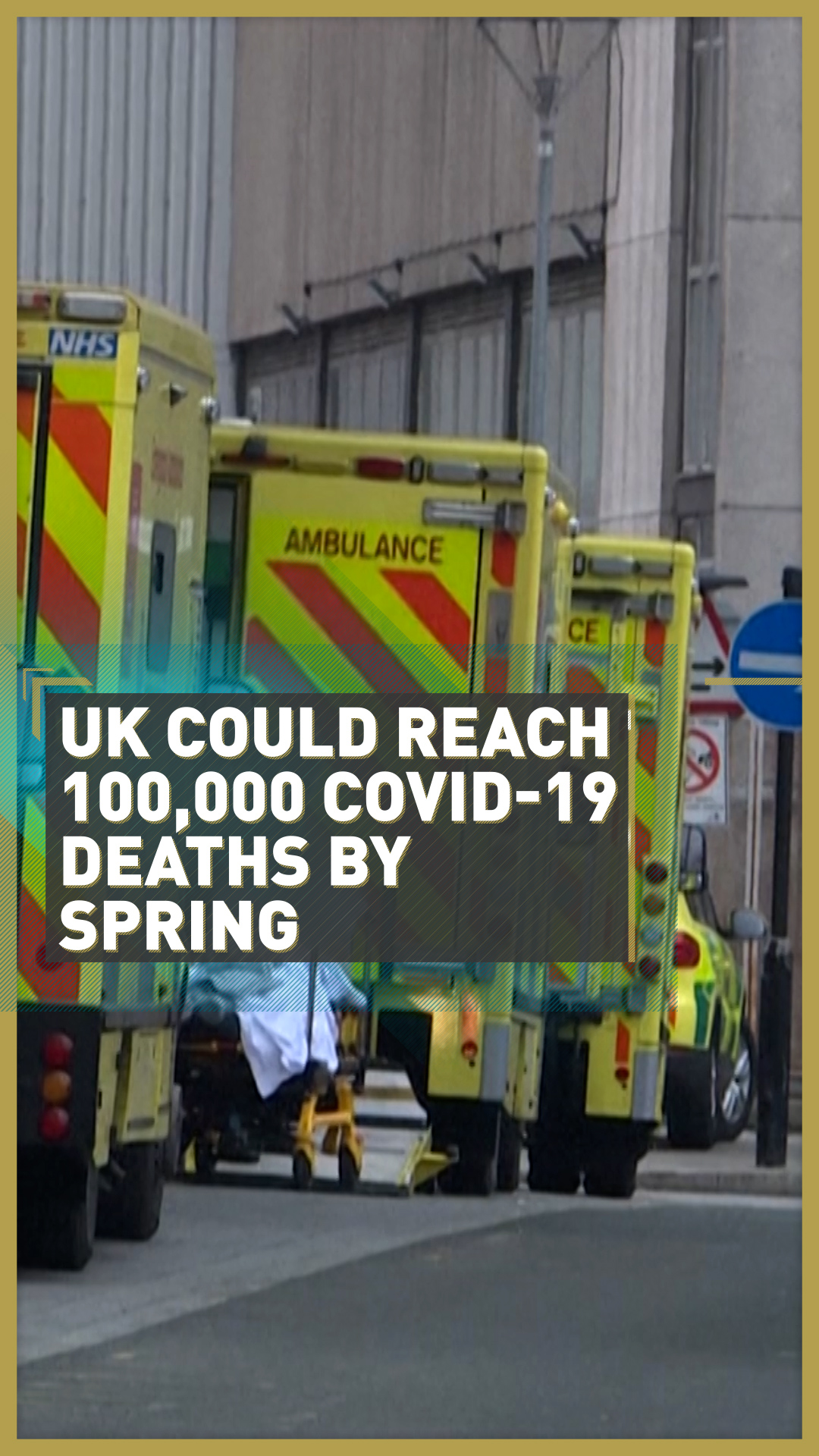 A nationwide lockdown, empty streets, surging COVID-19 infections and hospitals at full capacity, the crisis facing the UK this winter is familiar, but the numbers are worrying.

The UK passed a somber milestone as the death toll from the coronavirus reached 81,000 – with 30,000 in just the last 30 days – and cases at more than three million.

The country has found itself at the epicenter of the most recent wave of infections in Europe, as well as in the top five worst-affected countries in the world.

But despite the national lockdown, health experts say these numbers are expected to rise.

"I think the number of cases we're seeing and the number of deaths that we're seeing lag behind those cases that will continue for some time, and I think 100,000 by the spring is quite realistic," Julian Tang, from the Department of Respiratory Sciences at the University of Leicester told CGTN Europe.

Crisis in the capital

London has the highest regional case rate in the country at the time of writing, with one in every 30 people infected. London Mayor, Sadiq Khan, called the situation "critical" and declared a major incident.

Some scientists have said the relaxing of lockdown restrictions over the Christmas period, had, in part, allowed for further transmission.

"I think the pre-Christmas period if we stayed in lockdown in November to December and through to January, the number of cases and deaths would have been less even with the new variant," Tang said.

"Especially with London and the South East coming out to tier two rather than tier three, they were still free to shop and mix socially to a much larger extent than some of the other parts of the country," he added.

But while Tang said the infection rate will decrease during lockdown, the death toll will continue to rise because of the lag time behind cases. Doctors in the UK are warning that the crisis in hospitals in the capital, London, is grave. /Tolga Akmen/AFP

Doctors in the UK are warning that the crisis in hospitals in the capital, London, is grave. /Tolga Akmen/AFP

Doctors have also raised the alarm, warning that hospitals are becoming overwhelmed and the National Health Service (NHS) is reaching a crisis point, which may drive up deaths.

"You may see some excess deaths related to that pressure, and you may start seeing that in London fairly shortly because they're already overloaded and decanting patients out to elsewhere in the country where they have ICU capacity," Tang said.

"So that overloading of the NHS on top of the new variant and the case number backlog that we're seeing, may well lead to higher death rates indirectly and directly from the COVID-19 surge we're seeing now," he added.

The new variants of the virus, one first discovered in the UK and the other in South Africa, which were thought to be the driving force behind the second wave, have a much higher transmission rate.

Health experts have urged for restrictions on social distancing to be followed closely as human interaction is the prime source of transmission. The UK government says it currently administering 200,000 vaccines a day and aims for 14 million people to have been vaccinated by the middle of next month. /Kirsty O'Connor/Pool/AFP

The UK government says it currently administering 200,000 vaccines a day and aims for 14 million people to have been vaccinated by the middle of next month. /Kirsty O'Connor/Pool/AFP

The UK is now pinning its hopes on rapid immunization to enable life to start returning to some degree of normality by the spring, with the government saying it is currently administering around 200,000 vaccines a day.

Health secretary, Matt Hancock, said on Sunday that the country is on course to have immunized its most vulnerable people against COVID-19 by mid-February and offering a shot to every adult by autumn, with some two million people having already received the first dose.

For the government to meet its goal of vaccinating more than 14 million people by mid-February, comprising the over-70s, the clinically vulnerable – the elderly or with pre-existing conditions – and health and care workers, it needs to deliver two million shots a week.

With the U.S.-made Moderna vaccine now approved in the UK, health experts are optimistic that this could make a difference.

"So, the Moderna vaccine is very similar to the Pfizer-BioNTech vaccine and both of those vaccines are, we think, likely to work against this variant," Julian Tang said.

The UK was the first country to approve vaccines made by Pfizer-BioNTech and Oxford-AstraZeneca and hopes to begin administering the approved Moderna shot this spring.