Stock markets around the world have rallied, just hours after violent mobs descended on Washington DC, attempting to interrupt the accession to office of President-elect Joe Biden. Optimism over prospects for a stronger economic support package under the Democrats pushed both the Dow Jones and tech-heavy Nasdaq to new highs in early trading.

However, the hubris on the markets doesn't appear to be matched by the ongoing slew of dire economic data in Europe. Banque de France, the nation's central bank, has warned the impact of the pandemic is now posing a systemic risk to France's financial system. While Europe's biggest airline group by passenger numbers, Ireland's Ryanair, has said the new lockdown in the UK risks decimating business in early 2021.

One stock class that does look to be a safe bet for the near term is pharmaceuticals. Boston, U.S.-based Moderna has had a boost, with the news that the European Medicines Agency has approved its vaccine prototype for use. While Germany's CureVac is taking steps to hasten its product to market to meet mass demand.

As countries deal with their vaccine roll-out programs, CGTN Europe hears from Israel – where more than 12 percent of the population has already had the jab – over how it's managed such a huge undertaking.

And aside from high politics, pandemics and the free-wheeling markets, there's been a timely reminder of the challenges still facing the European Union on basic issues such as the environment. Watch our film from Bosnia where garbage equivalent to the volume of two Olympic swimming pools is threatening a power station on the region's famous River Drina.

US stock markets appeared to shrug off the political unrest in Washington, with the Dow Jones and the tech-heavy Nasdaq rising to record highs in trading on Thursday. Stronger-than-expected results from the services sector led the Dow to open 133 points higher. Wall Street remains hopeful that a Democrats-controlled Senate will pass deeper economic stimulus measures to deal with the effects of the COVID-19 pandemic. U.S. Congress certified Joe Biden's election victory just hours after hundreds of Donald Trump's supporters stormed the Capitol attempting to block the handover of power in two weeks.

The low-cost Irish airline Ryanair says it will slash outbound flights from the UK and Ireland from the end of January as it grapples with the effects of the pandemic. The carrier, which has been heavily criticized by consumer groups over its refund policy to would-be passengers during ongoing travel disruption, says it expects to lose 95 percent of traffic over the next two months, with passenger volumes for the full year down to between 26 and 30 million from the current 35 million. Ryanair has hit back at the administrations in both Westminster and Dublin for their handling of the COVID-19 outbreak, calling the restrictions in Ireland the most "stringent" in Europe.

France's central bank has warned the effects of the COVID-19 lockdown will pose a systemic risk to the country's financial system in the coming months. The corporate debt of non-finance firms is the chief cause of concern, the Banque de France said in its semi-annual review. Many firms face problems meeting debt obligations after the months of inactivity, with low interest rates also putting pressure on lenders' margins.

Meanwhile, the UK's financial watchdog is warning that the country's third lockdown is putting up to 4,000 small financial firms at risk of business failure. Based on a survey conducted last summer, the Financial Conduct Authority found that retail lenders and payments firms were most at risk due to falling liquidity levels, with 44 percent of smaller insurers having furloughed their staff due to COVID-19.

Construction activity in the eurozone fell for the 10th month in a row in December 2020, according to the latest survey from the influential global analysis group IHS Markit. The index slipped to 45.5 in December from 45.6 in November, further below the crucial 50 mark that divides growth from contraction. Commercial property was unsurprisingly the worst-hit sector, with the sharpest decline in activity reported in France.

There's new evidence of the impact the pandemic is having on population trends across Europe. New data from the accountants PWC suggest the population of London will fall for the first time in 30 years in 2021, from the current 9 million to 8.7 million. The combination of home working, redundancies and concern over safety and the impact of COVID-19 on quality of life is causing many people to reassess their living options.

In another about-turn, the New York Stock Exchange says it will now go ahead with plans to delist three Chinese telecoms firms after a further evaluation. In a statement, the exchange said that after receiving "new specific guidance" all three stocks will be suspended from further trading from 4 a.m. Eastern time on Monday, January 11. The NYSE had originally announced it would delist the companies on New Year's Eve, in compliance with the presidential executive order, before changing course four days later.

Meanwhile, shares in Alibaba and Tencent have fallen amid reports that they, too, are to be added to the ongoing list of Chinese firms barred from U.S. exchanges by the outgoing Trump administration. The Hong Kong listings for the stock of both firms was down around 4 percent in Asian trading after similar falls on Wednesday in New York, where the companies have a combined market capitalization of more than $1.3 trillion. If the executive order goes ahead, U.S. investors will be barred from taking positions with both firms after January 11, with existing shareholders having until November to exit their holdings.

Massachusetts, U.S.-based Moderna Therapeutics has received a boost with the news that its COVID-19 vaccine has been approved for use by the European Medicines Agency. The EU has ordered 80 million doses of the treatment at a cost of $24 each, with an option to double the amount at a later date. Meanwhile, Germany's CureVac group is teaming up with the country's biggest pharmaceuticals company Bayer to accelerate the production of its own COVID-19 vaccine. Stuttgart-based CureVac, which is part-owned by the German government, has been lagging competitors in the vaccine race, but says it hopes this new deal will help it deliver up to 900 million doses in total by the end of next year.

Danish prosecutors have dropped charges against six individuals, under investigation for their alleged part in the so-called "Estonia Laundromat" scandal. Nine former managers at Danske Bank were facing preliminary charges for their suspected role in a scheme to launder up to $245 billion in illicit cash from countries including Russia and Azerbaijan. The transactions were made through branches acquired in Estonia after the group's 2007 merger takeover with Finland's Sampo Bank. In a statement, the Danish prosecutor said no evidence of gross negligence had been found in the case of six individuals, but declined to comment on the other three.

Qatar Airways is poised for a surge in bookings after Saudi Arabia agreed to reopen its borders and its airspace to the Emirati carrier after a three-and-a-half-year blockade. Analysts say the about-turn by Riyadh could pave the way for the UAE, Egypt and Bahrain to follow suit, meaning shorter air trips and lower prices at the airline, which had previously gone to court to challenge the ban. A rise in demand for flights to Doha could also mean Qatar returning to smaller regional airports around Europe, where it had previously scaled back its operations.

WATCH: A large amount of garbage, estimated at between 4,000 and 5,000 cubic meters – the equivalent volume of two Olympic swimming pools – invaded the dam of a hydroelectric power station on the Drina river in eastern Bosnia. 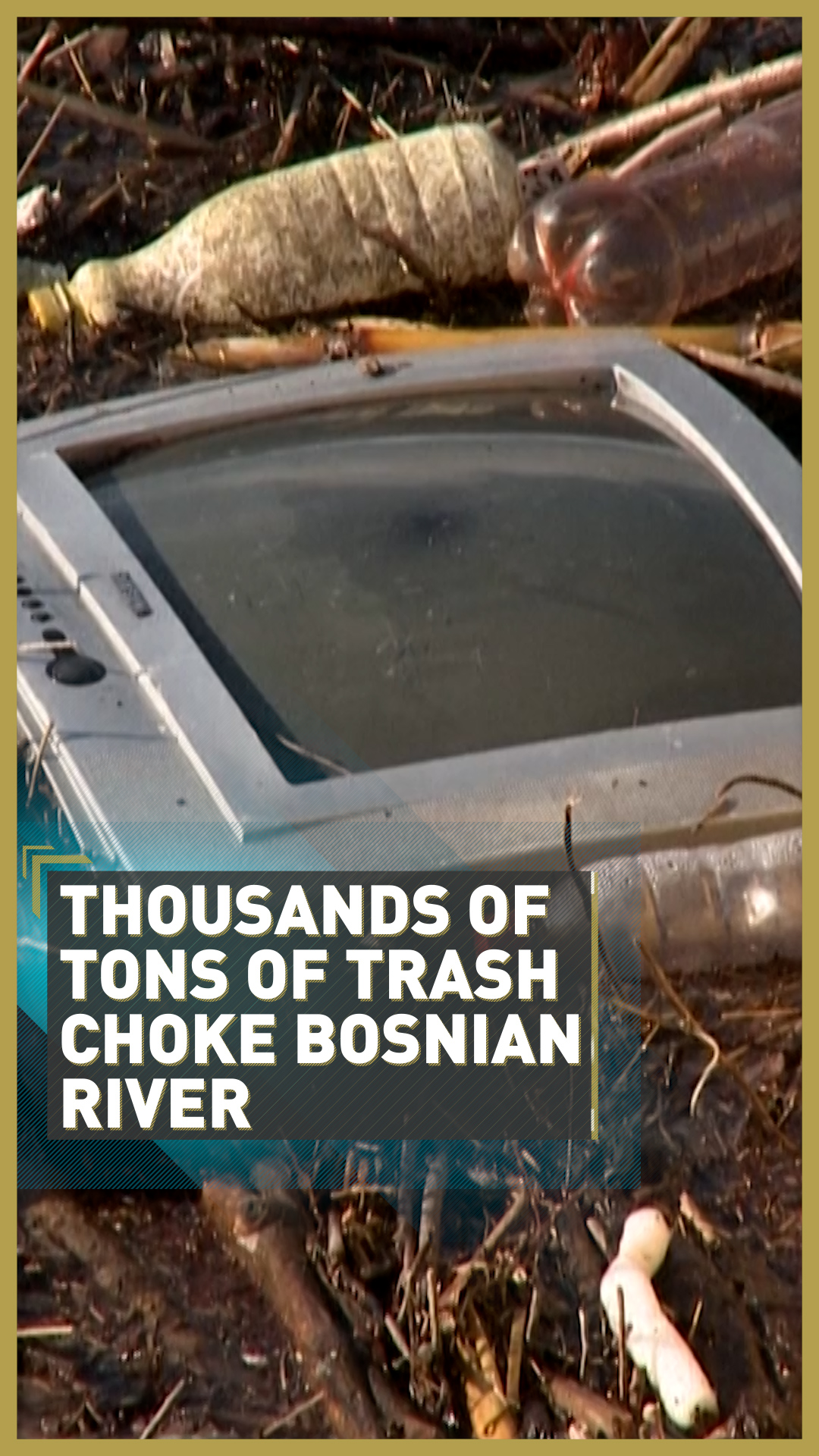 One country that seems far ahead in its vaccine roll-out is Israel, with more than a million Israelis getting their first jab in the space of two weeks. That is equivalent to 12 percent of the overall population of 9 million, with a further 6 million doses on order. CGTN Europe was joined by Manfred Green, professor of epidemiology at the University of Haifa, to discuss the response.

There were basically two things. One was that Israel was very proactive in taking out options on vaccines, which was risky in terms of the amount of money that was spent but in the end it paid off and we have been able to access several vaccines. So, we have a large number of doses of vaccines that are already in Israel. The other is that we have a very centralized health system and everyone in the country belongs to one of the health maintenance organizations, so it's very easy to organize scheduling appointments.

How can other countries learn from the Israel experience?

Other than making sure you acquire the vaccine  … the other is setting up a good organizational structure. You have to take into account that people in the high-risk groups ... have to be given very simple instruction as to where they go for the vaccine, how they get there and what time they need to be there, and make sure you have very accessible vaccination centers and good staff.

How is Israel allocating vaccines?

The committee on the COVID vaccine made a decision fairly early on there should be priority groups. Healthcare workers and the high-risk, particularly the elderly – we decided early on that age was critical and in order to simplify things, anyone over 60 was able to access the vaccine ... and that's the way we set up the vaccine; making sure these two groups were targeted.

And finally: Millions of Netflix users in the UK with standard and premium packages will see prices rise by up to $32 a year. When the changes take effect will depend on the customer's initial subscription date. Netflix says the change is needed to help fund a huge investment in new content, but consumer groups say it is an unwelcome additional burden for hard-pressed households as the third lockdown in Britain gets under way. 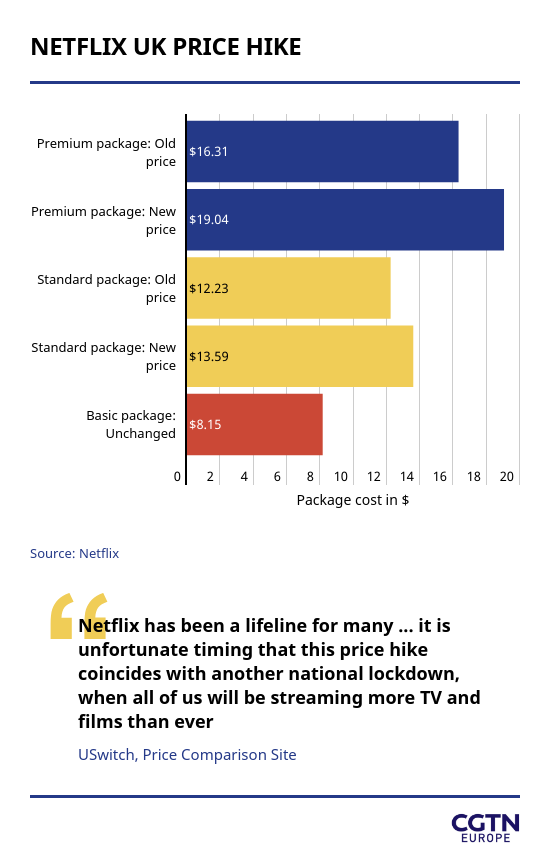