Download
Memos, rows and Windows... the '90s struggle to get the UK government online
Gary Parkinson 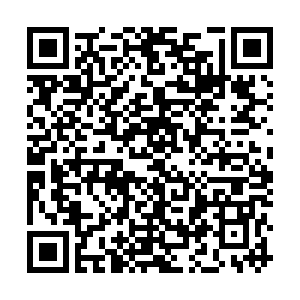 Newly released UK government documents from the mid-1990s detail the agonies of setting up the first public website for 10 Downing Street – along with other big tech decisions, such as migrating to Windows NT and bickering over the siting of an office printer.

The discussions, among a tranche of documents released on Wednesday December 30 by the UK's National Archives, are a throwback to a different technological era – with hand-typed minutes from face-to-face meetings detailing decisions made about telegrams, fax machines and internet connections.

In 1997, only 7.4 percent of the UK population had internet access, but this had mushroomed from 1 percent in 1994 and would hit 56.5 percent by 2002. John Major's Conservative government wanted to be online, but would it be safe?

In 1995 an unnamed adviser at Government Communications Headquarters – better known as GCHQ, the UK's intelligence network – wrote to Donald Horsburgh, Downing Street's Information Centre Controller, stating that "despite the current concern over internet connections, which is a constant cause for concern, we believe you have found a viable way forward" with unhackable connections to the internet. Finally, 10 Downing Street's virtual door could open. But how?

In summer 1995, project pitches were made by the Information Design Unit (insisting that "the site should be dignified and warm, be interesting to look at but not gimmicky"), BA Publishing Services Ltd and the Central Office of Information. This last organization had been set up by government in 1946 to replace the Ministry of Information but had stayed on the bleeding edge: its pitch proudly noted that "As long as eight years ago, COI Films was providing interactive training programs on laserdisk."

Whether it was that track record, the assertion that the site required "a professional, modern look that avoids the kitsch of some other websites, while reflecting British culture" or the fact that its cost estimate of 7,378 pounds (equivalent to around $19,500 today) was a third lower than the Information Design Unit's, the COI got the commission.

In a Downing Street memo, Major's principal private secretary, Alex Allan, "thought BA Publishing's design was a bit fussy and over-complicated. I liked the COI's logo and thought their pseudo-virtual reality was a tremendous idea."

Allan, an interesting type, who had once defied a train strike by windsurfing to work down the Thames in pinstripe suit and bowler hat, would later set up a Grateful Dead search engine. And in November 2020 he resigned as the prime minister's independent adviser on parliamentary standards after current PM Boris Johnson rejected his inquiry findings into bullying allegations against interior minister Priti Patel. 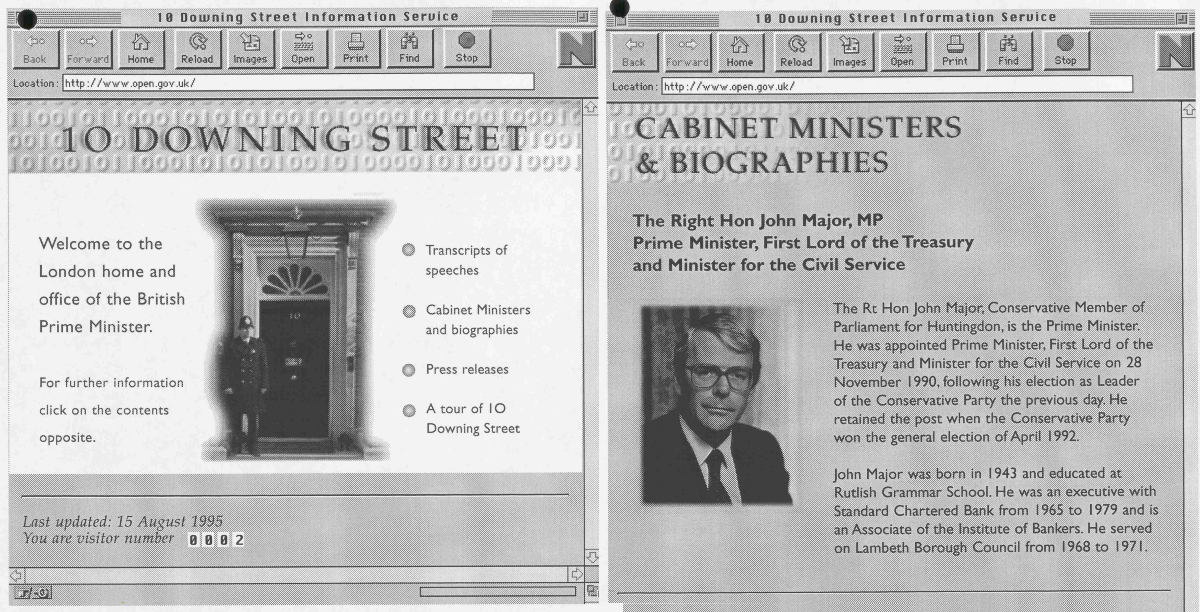 Preliminary plans for the first-ever public 10 Downing Street website, as designed by the Central Office of Information. /The National Archives

Preliminary plans for the first-ever public 10 Downing Street website, as designed by the Central Office of Information. /The National Archives

By spring 1996, Allan was wondering whether the in-progress website should include Major's speeches not just to parliament but also at party conferences. This was swiftly overruled by the PM's director of communications Jonathan Haslam – not because Haslam was against the communication revolution (his current website notes that he was "the first person to have been hooked up to email in the No 10 press office") but because he feared accusations of political opportunism.

"However good our justification as a matter of commonsense, it is always likely that the main opposition parties would make mischief," responded Haslam. "The only way to avoid it is to concentrate solely on Government speeches with no cross-reference."

Not one to give up on an idea, Allan revisited it in the fall by suggesting in another memo that the new site could have links off to relevant parts of the Conservative website, balanced by links to "other political parties." Allan's handwritten addition asked Major if "you have any objection to my approaching Mr [Labour leader Tony] Blair's and Mr [Liberal Democrat leader Paddy] Ashdown's office.” Evidently Major did not, for the plan went ahead.

Meanwhile, a copy of a letter from Downing Street to news agency Reuters thanked a recent visitor for a "free trial" of a "business information service." A handwritten note suggests the service "would allow us to identify (and retrieve?) press cuttings on the basis of keywords. Are you likely to be interested?" Two years before the founding of Google, the idea of computer-based internet searching was beginning to reach the corridors of power. 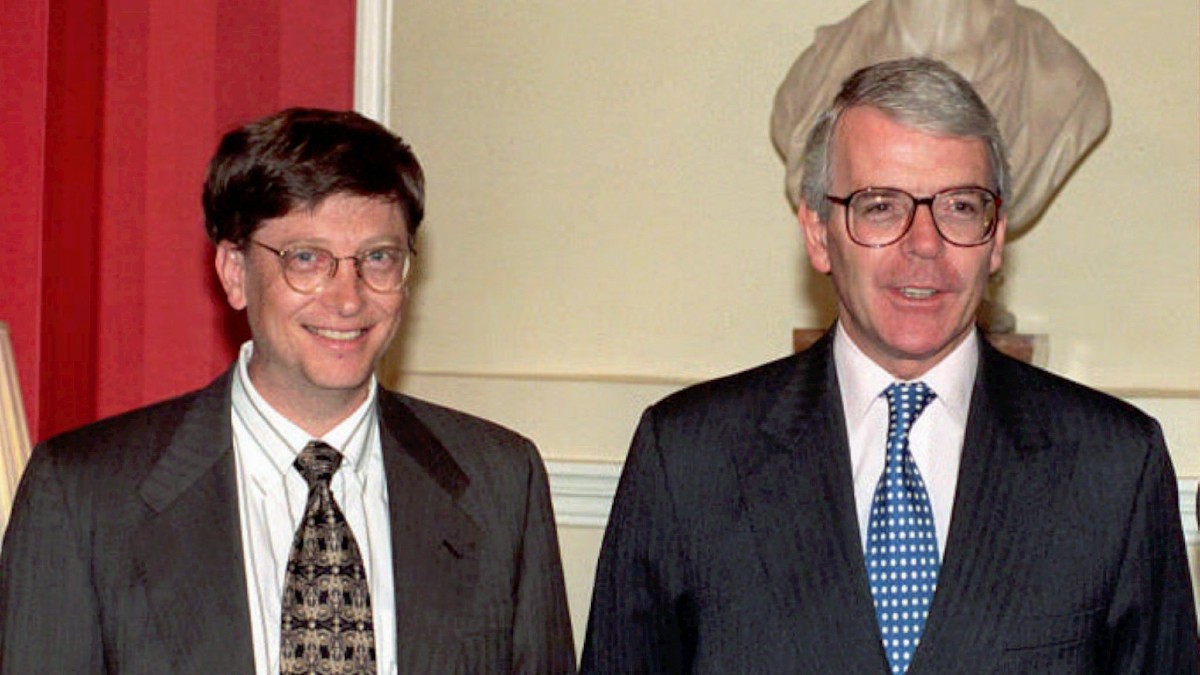 While the back office dealt with migrating to Windows NT (which had been launched in 1993), a restricted memo from Allan discussed different technologies, some of them deemed too futuristic while others now seem as relevant as semaphore.

"When the Prime Minister is overseas, we do need a means of communication via secure fax," wrote Allan, who also requested "local Internet access to pick up news stories etc. We do not need anything very sophisticated: a laptop connected to a phone line is adequate." However, "one facility we do not see any need for, at least for the present, is the video-phone link that has been trialed."

A site is launched

As with many a project in IT or for that matter government, the 10 Downing Street website was late. Among the thorny issues to be decided upon was whether to have a direct email address for the public to contact the Prime Minister ("Concern was raised at possible resource implications of such a move"), although "it was hoped to place an audio clip of the PM on the opening screen."

Originally scheduled for the August opening of parliament, the site finally launched on December 10, 1996. Questions were indeed fired across the internet from selected children at the Douay Martyrs School, chosen because headmistress Lady (Marie) Stubbs was an IT advisor to the Department for Education and Employment. (The formidable Stubbs would later be handpicked to turn around a west London school put in special measures after headteacher Philip Lawrence was stabbed to death by a pupil while breaking up a knife fight.)

With Major effortlessly batting away questions about cricket, supper menus, Christmas and IT, private secretary Angus Lapsley graciously thanked Stubbs in a memo, excitedly noting that "Some 300,000 people visited the site on its first full day of operation." 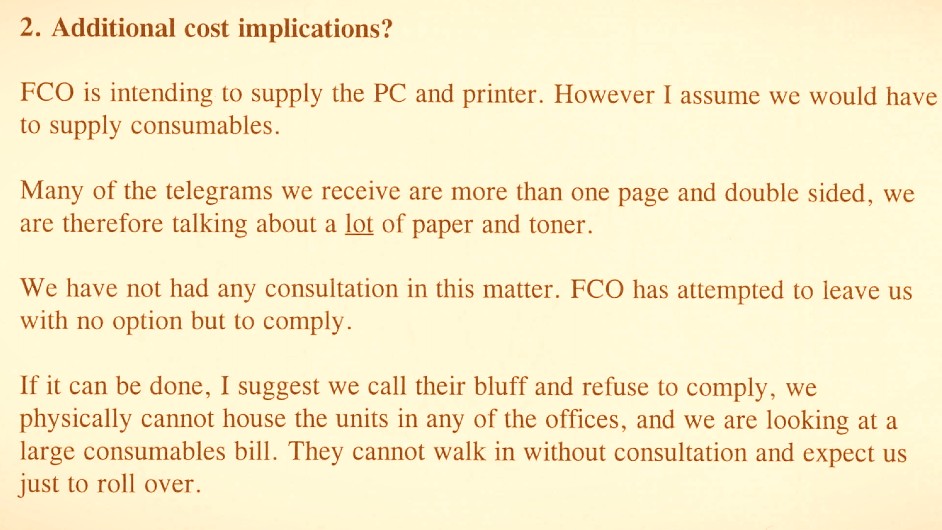 In 1997, the suggested siting of a printer caused interdepartmental indignation. /The National Archives

In 1997, the suggested siting of a printer caused interdepartmental indignation. /The National Archives

But the happiness over the government's brave new technological dawn was not to last long. Memos from 1997 detail an inter-departmental spat over the siting of a printer, after the Foreign Office closed down its telegram distribution service and suggested providing a PC-fed printer at Downing Street.

"Daily traffic could be as high as two or three hundred telegrams a day. This would mean the printer working nearly all day," thundered a memo worried about "noise pollution," not to mention the ongoing cost of "consumables": "I suggest we call their bluff and refuse to comply."

However, bigger changes were afoot in government. The final document in the newly released tranche is dated April 29, 1997, two days before the general election, and typically Alex Allan was on top of the housekeeping: "The external web pages are in order if there is a change in Government."

There was, with Blair leading Labour back into power after 18 years in the wilderness. By the time Labour was voted out in 2010, there would be no arguments about the need for a government website.