The European Union launched its mass coordinated COVID-19 vaccination effort on Sunday, with the elderly, healthcare workers and politicians some of the first in the bloc's 450 million people to receive the shots, as hopes rise for a swift recovery from the continent's worst health crisis in a century.

"I did not notice the pinprick, I would say, at all. It was great," 101-year-old Gertrud Haase said while laughing after she became the first in Germany to be vaccinated.

Germany, Hungary and Slovakia began administering the vaccine a day earlier after all of the EU's 27 countries started receiving the shipments of the vaccines in super-cold containers.

Each country was only getting a fraction of the doses needed — fewer than 10,000 in the first batches — with the bigger rollout expected in January when more vaccines become available. All those who are getting shots on Sunday will need to come back for a second dose in three weeks.

"A window of hope has now opened, without forgetting that there is a very difficult fight ahead," Portuguese Health Minister Marta Temido told reporters.

Europe is trying to catch up with the U.S. and the U.K., who have both already started vaccinations using the Pfizer-BioNTech shot. It is due to receive 12.5 million doses of the shot by the end of 2020, enough to vaccinate 6.25 million people based on the two-dose regimen.

"The important thing is that people are willing to be vaccinated. The vaccines are safe and they are effective. They are not only a protection for the people themselves but of course also for their environment," she added.

"Thank God," 96-year-old Araceli Hidalgo said as she became the first person in Spain to have a vaccine at her care home in Guadalajara near the capital Madrid. "Let's see if we can make this virus go away."

In Italy, the first country in Europe to record significant numbers of infections, 29-year-old nurse Claudia Alivernini was the first of five doctors and nurses at Rome's Spallanzani Hospital to receive the shot.

"Today, I'm here as a citizen but most of all as a nurse to represent my category and all the health workers who choose to believe in science," she said.

Francesco Vaia, health director of the Spallanzani hospital, where the first Italian cases of the virus were discovered earlier this year, said, "Today is the beginning of the end, today we strike a very hard blow to the virus." 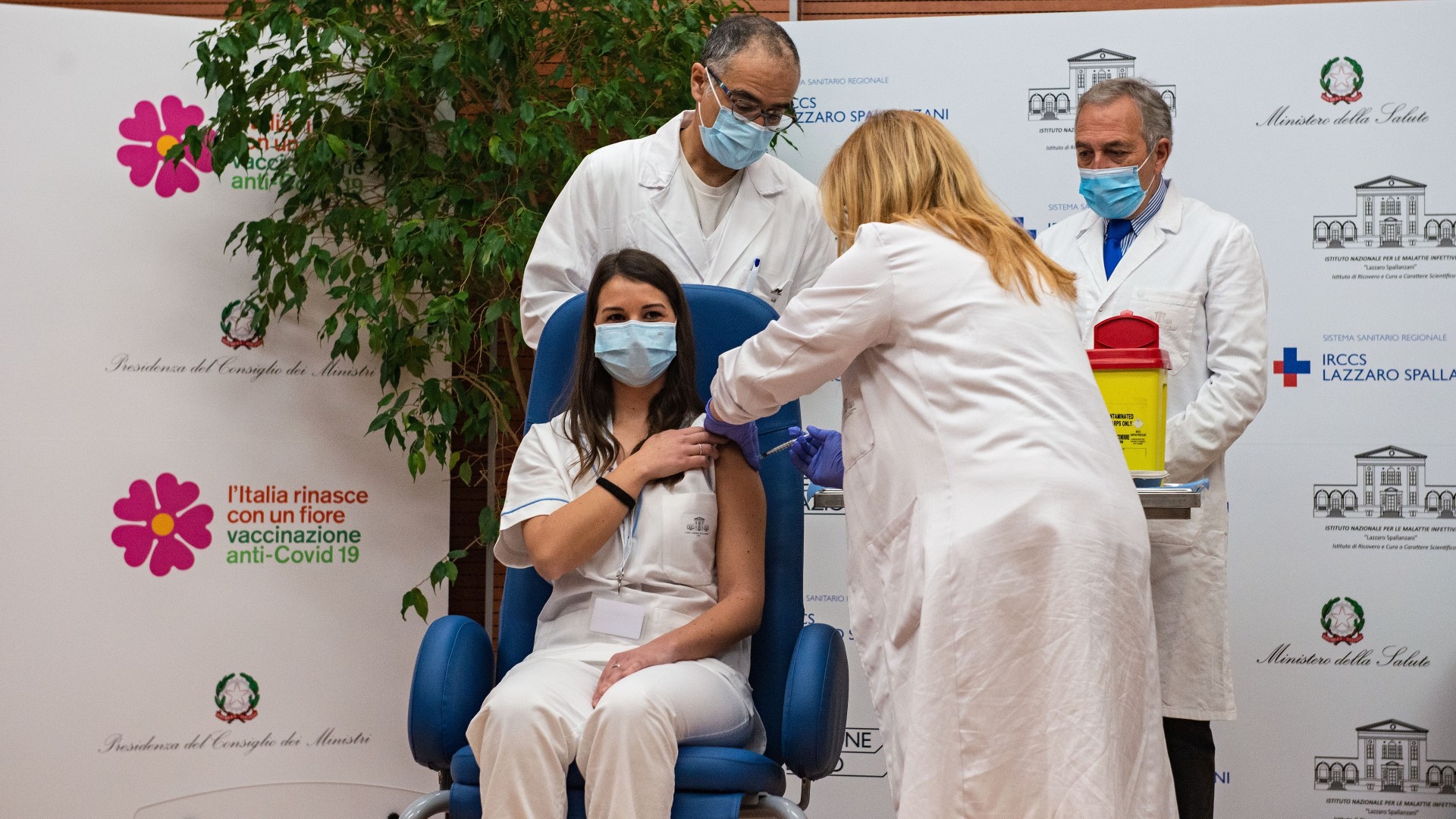 Healthcare workers were the first to receive the COVID-19 vaccine in Italy, which was one of the earliest countries in Europe to report the virus earlier this year. Andrea Sabbadini/Spallanzani Institute/AFP

Healthcare workers were the first to receive the COVID-19 vaccine in Italy, which was one of the earliest countries in Europe to report the virus earlier this year. Andrea Sabbadini/Spallanzani Institute/AFP

We know that today is not the end of the pandemic but it is the beginning of the victory.
-  Sebastian Kurz, Austria's chancellor

In Czechia, which was spared the worst of the pandemic in the spring only to see its health care system near collapse in the fall, Prime Minister Andrej Babis was the first to receive his shot at dawn and asserted: "There's nothing to worry about." Sitting next to him was World War II veteran Emilie Repikova, who also received a shot.

Alicja Jakubowska, head nurse at Warsaw's Interior Ministry hospital, was the first in Poland to receive the vaccine. "It is a protective armor for us, right? If we want to get back to normal, and we all do, unfortunately, we have to get vaccinated," she said.

With surveys pointing to high levels of hesitancy towards the vaccine in countries from France to Poland, EU leaders are promoting it as the best chance of getting back to something like normal life next year.

"We have a new weapon against the virus: the vaccine. We must stand firm, once more," tweeted French President Emmanuel Macron, who tested positive for the coronavirus this month and left quarantine on Christmas Eve.

Greece joined other European countries in rolling out the COVID-19 vaccine in hopes that it could recover from economic strain caused by the pandemic this year. /Alkis Konstantinidis/Pool/AFP

Greece joined other European countries in rolling out the COVID-19 vaccine in hopes that it could recover from economic strain caused by the pandemic this year. /Alkis Konstantinidis/Pool/AFP

The distribution of the shot presents tough challenges as the vaccine uses new mRNA technology and must be stored at ultra-low temperatures of -70 degrees Celsius.

Altogether, the EU's 27 nations have recorded more than 16 million coronavirus infections and more than 336,000 deaths — huge numbers that experts say still understate the true toll of the pandemic due to missed cases and limited testing.

With Europe still on high alert over the spread of the new strain of the coronavirus first reported by UK authorities, the road ahead remains long.