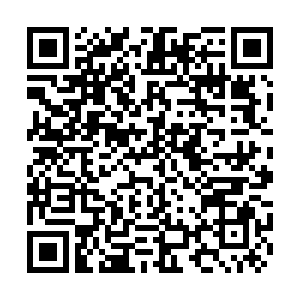 A rare service outage by Google brought business activity to a standstill across the globe on Monday. Those logging on to the company's Gmail and Drive applications were met with error messages, including a whistling purple monkey brandishing a hammer on YouTube's website. While services were mostly back online by around 12:30 p.m. GMT, for those operating from home under COVID-19 conditions, it was a reminder of some of the tech downsides of working in splendid isolation.

As tougher COVID-19 measures were announced across Europe – with parts of southern England being put under the harshest Tier 3 measures and Germany bracing for a hard lockdown that threatens a double-dip recession – phase three trials of a vaccine are accelerating. German biotech firm CureVac says final-stage trials will get under way in Europe and South America soon. Elsewhere, mergers and acquisitions abound in the pharma sector, with AstraZeneca's planned $39 billion stock and cash offer for Boston-based Alexion.

And as a Washington court debates the future of the TikTok app in the U.S., the cloudy regulatory outlook hasn't put off Reddit from making a rumored multi-million dollar offer for TikTok's smaller rival Dubstar, as the rush for video space continues.

Read on for more of the day's business stories in detail.

Homeworkers around the globe were dealt a blow on Monday as a Google outage knocked applications including Gmail, Drive and YouTube offline. Services were suspended for about half an hour before midday London (GMT) time, having a serious impact on the many businesses that rely on Google for their basic work apps. Switching to incognito mode failed to deliver a backup option as 404 messages abounded. Smart devices such as home speakers synced to Google apps also took a hit. In a post on Twitter, Google blamed "an authentication system outage ... due to an internal storage quota issue."

In perhaps a case of bad timing, the outage came on the same day Google said it would push back return-to-office plans for its workforce until September 2021 at the earliest. In a staff email, Sundar Pichai, CEO of Google's parent company, Alphabet, added that management was considering post-pandemic plans for a "flexible work week" where staff would spend just three days in the office.

The pound has rallied in Monday's trading on renewed hopes of a UK/EU trade deal, as the deadline talks on Sunday were pushed back. UK Prime Minister Boris Johnson, and European Commission President Ursula von der Leyen agreed on Sunday to "go the extra mile" in talks as the date for the UK to leave the bloc edges closer. Despite warnings from Johnson that no deal remains "the most likely option," the pound posted its biggest gain in two months, advancing 1.7 percent against the dollar to reverse most of the losses made last week.

The issue of fishing rights, and access by EU boats particularly to more lucrative shallow waters off the British coast, remains a key obstacle to a successful outcome in Brexit talks. After a three-year transition period, the UK is pushing for annually negotiated agreements and from January wants to end the movement of foreign-owned fishing vessels registered in the UK for fishing purposes.

Elsewhere it is reported that the World Trade Organization has failed to reach a deal that would end subsidies leading to overfishing by an end-of-year deadline. World leaders committed in 2025 to the target of removing billions in subsidies to domestic fishing fleets globally, with the United Nations' food agency warning that 90 percent of marine fishing stocks are being exploited to the point of depletion. Sources at the WTO meetings claim time lost due to the COVID-19 pandemic has disrupted the timetable.

German biotech group CureVac has announced plans for stage three trials of its COVID-19 vaccine in Europe and Latin America. 35,000 participants over the age of 18 will be tested with the treatment, which, unlike its BioNTech rival, can be stored at standard refrigeration temperatures. CureVac, which is part owned by the german government, is the 13th pharma company to announce plans for final-stage trials, just as governments across Europe, including the UK and Germany, are warning of a return to tougher coronavirus conditions over the festive period.

Pfizer's CEO has said the drugmaker is still negotiating with the U.S. government over further supply of COVID-19 vaccines next year. In an interview, Albert Bourla said the requested 100 million doses may not be available until the third quarter of 2021, later than previously hoped.

Meanwhile, shares in AstraZeneca have fallen almost 10 percent ahead of the firm's planned $39 billion takeover of U.S. biotech firm Alexion. Brokerage firms valuing the deal, which will be two-thirds funded by AstraZeneca shares, have described the price as "hefty". This latest fall in assets has wiped $9.4 billion off its market value. Alexion, which specializes in the treatment of rare illnesses, is facing internal pressure for a sale from activist shareholders, some of whom believe the current offer from Astra may actually undervalue the firm.

EU regulators have approved a $36.5 billion scheme to cut greenhouse gases in the Netherlands. In line with the objectives of the EU's Green Deal, the SDE+ project will allow suppliers to bid on a competitive basis for support in providing options for renewable energy, carbon capture and storage and waste management.

An appeals court in the U.S. is hearing the appeal case for the banning of Chinese-owned TikTok from domestic app stores. In September, a district judge in Washington blocked an application by the Commerce Department to prohibit new downloads of the video-sharing app, in a move that would have required both Apple and Google to remove it from their stores. Earlier this month, the Trump administration opted not to grant TikTok's owner ByteDance an extension of an order requiring it to sell its U.S. assets, but disagreement has continued over the future of the video-sharing app.

The online news platform Reddit is buying the U.S. video-sharing site Dubsmash in a private deal. Analysts say Reddit, a news and social media content aggregation site, may have raised as much as $20.2 million to finance the deal, which it hopes may help it claw back market share from bigger rivals such as TikTok. 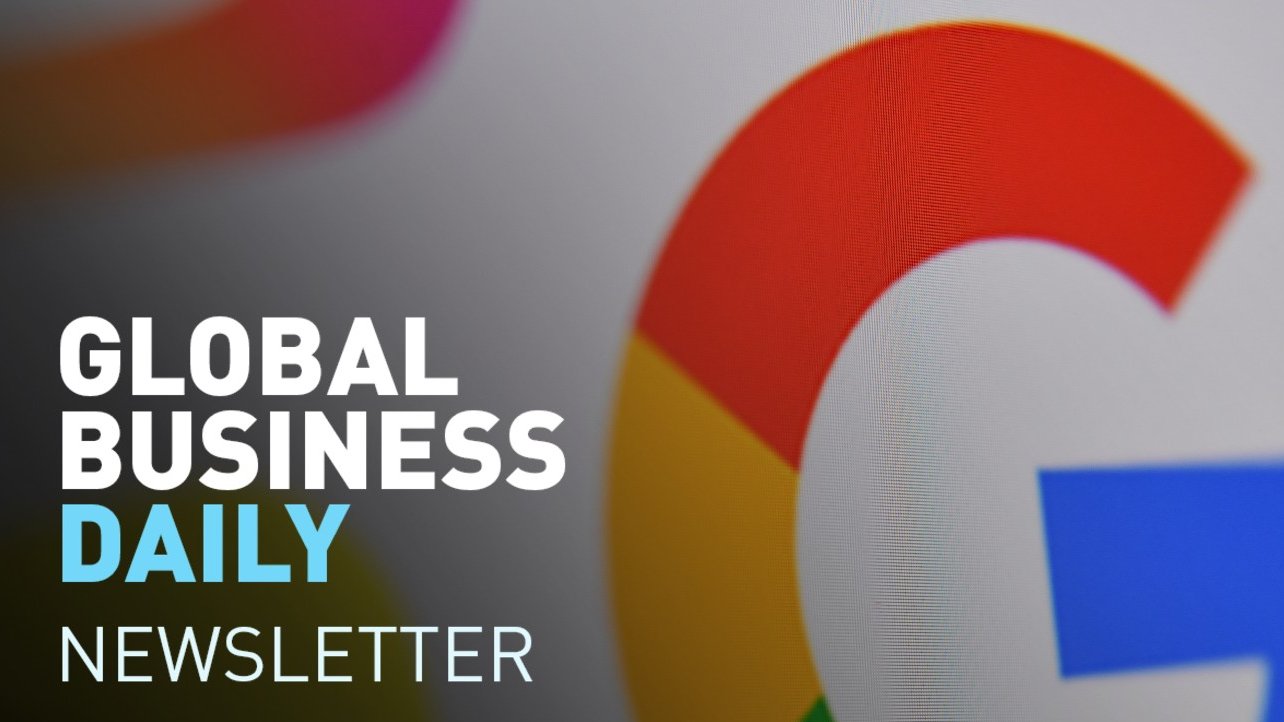 WATCH:  Plastic packaging, much of it originating from European supermarkets and displaying the logos of British and French consumer brands, is being dumped illegally in Turkey. It appears to be an environmental disaster stemming from one of the most popular ways to look after the environment: recycling.

Negotiations may have restarted between the UK and the EU over a post-Brexit trade deal but UK Prime Minister Boris Johnson has warned the sides remain "very far apart" in key areas.

With just two weeks to go to finalize an agreement ahead of the UK's exit from the bloc, CGTN Europe is joined by Helen Thomas, a market analyst, former fund manager and founder of Blonde Money, to discuss the sticking points.

I think what we need to look for here is creativity, that's actually the word that's been used by the leader of the Republic of Ireland, because there are still these red lines people have to move on. And I think on the EU side, what is relevant here is that Michel Barnier has been doing all this negotiating. He's just working under the mandate from the member states. This is why Boris Johnson wants to hear from Emmanuel Macron in France, Angela Merkel in Germany. They are the ones actually who could break the deadlock if they so choose. That's maybe where this creativity has to come from.

What are the chances now of a no deal and where could this leave the UK?

Well, everyone is talking, of course, about disruptions in the event of no deal, but there's still a huge amount of trade that will go on between the EU and the UK. And on January 1, 2021, the UK would be the most aligned 'third country' with the EU. So, some of the rhetoric around no deal is a little bit exaggerated. And particularly now we've seen the Commission move in terms of keeping the planes in the air and the lorries on the roads. But I would just throw in this point: we've had the pandemic this year. The global supply chains broke down. Effectively, that was like a global no-deal Brexit. And, of course, we have all managed to get through the worst of that. So, in many respects, we had an even worse dry run when it came to what happened in the pandemic. So the ramifications of this between the UK and the EU may well not be as bad as everybody thinks. So there could be some cause for Boris's optimism.

Finally the proportion of workers termed "low income" appears to be growing in Europe. The latest figures (although dating from 2018) show that earnings lag widest in the states of the former Eastern bloc, with almost a quarter of workers in Latvia termed "low earners" compared with just under 4 percent in Sweden. Despite the caveats, it's another example of the huge challenges facing policymakers across Europe as a whole. 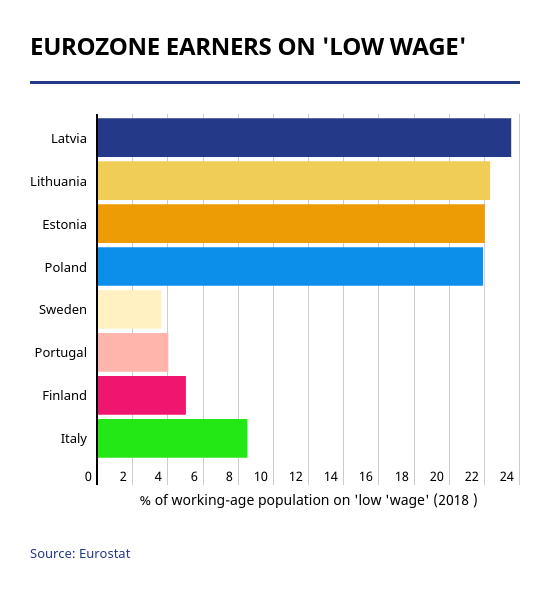