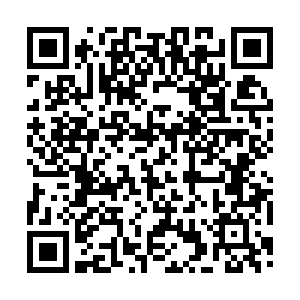 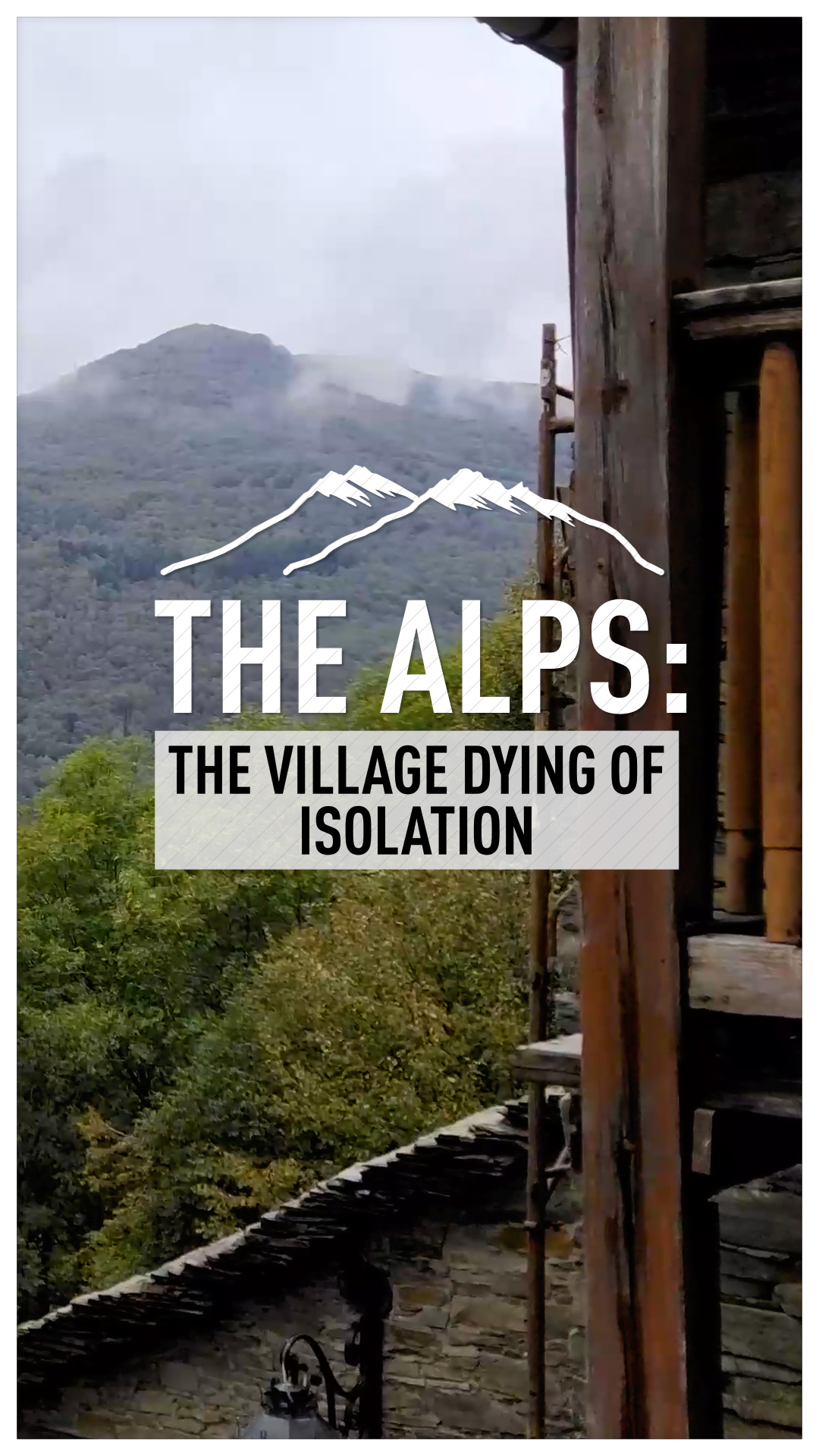 Among the Alpine foothills of Lombardy, in northern Italy, there is an island in the middle of the forest. It is called Monteviasco, and it's a little village made of stone dwellings, wooden balconies and narrow cobbled alleys.

At first glance, it looks like one of the thousands of villages nestled in the Alps. But looking at a map is enough to understand that this is a special place. Not a single road or railway leads to Monteviasco, and only a winding mule track of 1,442 stone steps connects it to the rest of the world.

Although in the 1950s the village had 450 inhabitants, today only six people live permanently in the village. Among them is Augusto, a native of Monteviasco who, since he retired, has been spending eight months of the year in the house where he grew up, in this tiny hamlet high up in the mountains.

In the past, says Augusto, the locals treated the absence of a road as normal. "We didn't even think about it," he says. "We were children, we used to run all the time, and for us and our parents, the daily routine was to go back and forth on the mule track, on foot to the nearby villages, to work, to go to school, and even to do the shopping." 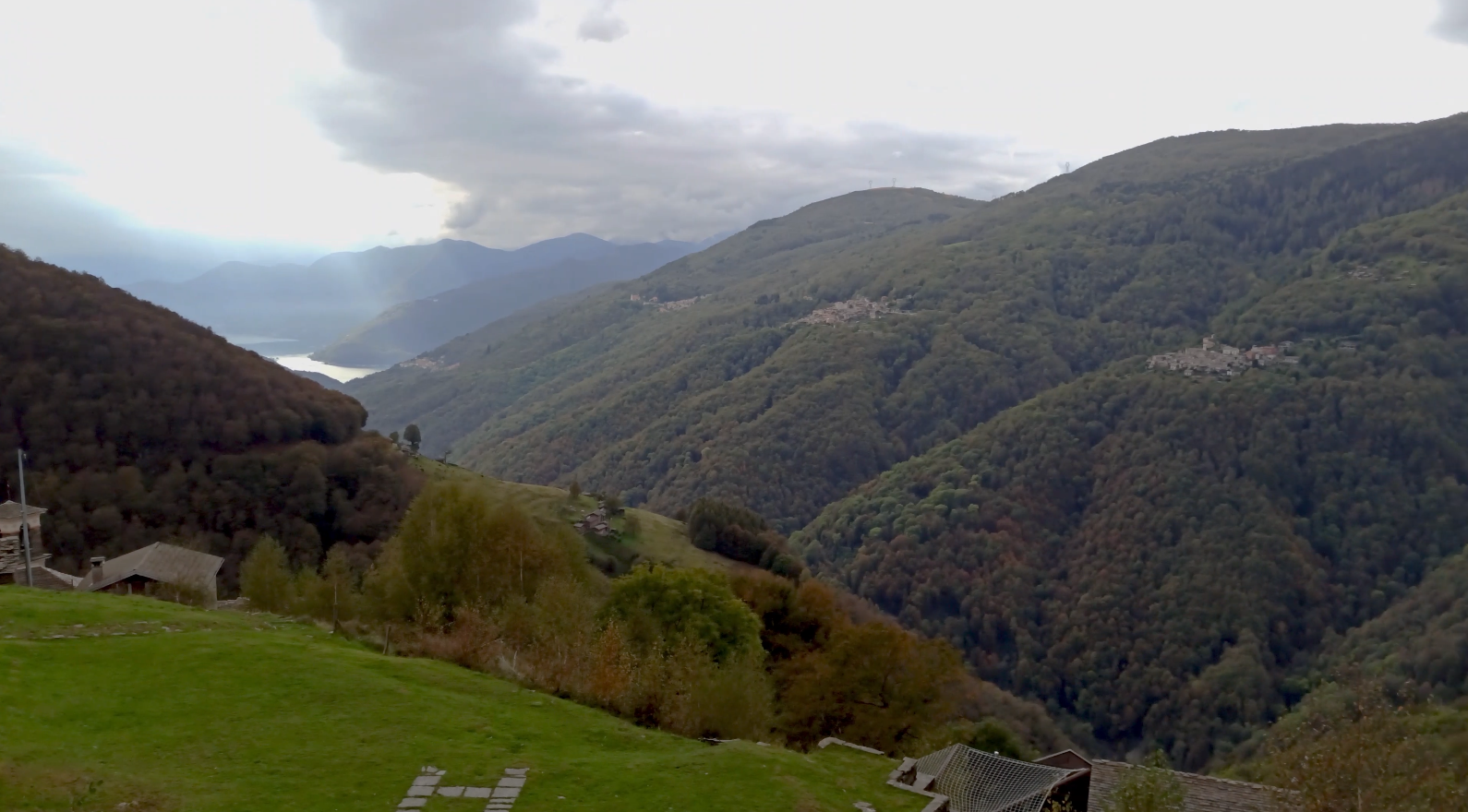 The hamlet lies nestled above other more accessible villages. /CGTN

The hamlet lies nestled above other more accessible villages. /CGTN

In 1988 a cable car was built to break the isolation of the small community of Monteviasco. In cabins suspended over the forest, residents and tourists could reach the village in a few minutes instead of an hour's walk. Since 2018, however, after a fatal accident, the cable car has been out of service. 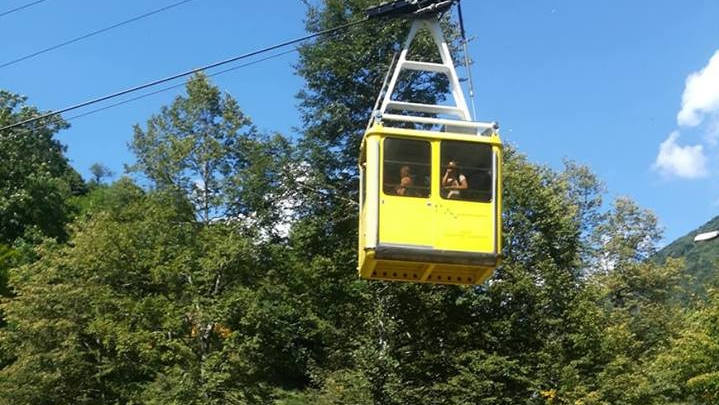 Then in August 2020, a landslide destroyed the only road leading to the mule track, further isolating the village. As there are no shops in Monteviasco today, the Carabinieri gendarmerie corps is currently in charge of the supply of essential goods for the local inhabitants. Three times a week, a small group of Carabinieri travel along the mule track with rucksacks on their shoulders, bringing the residents their food, medicines and mail. 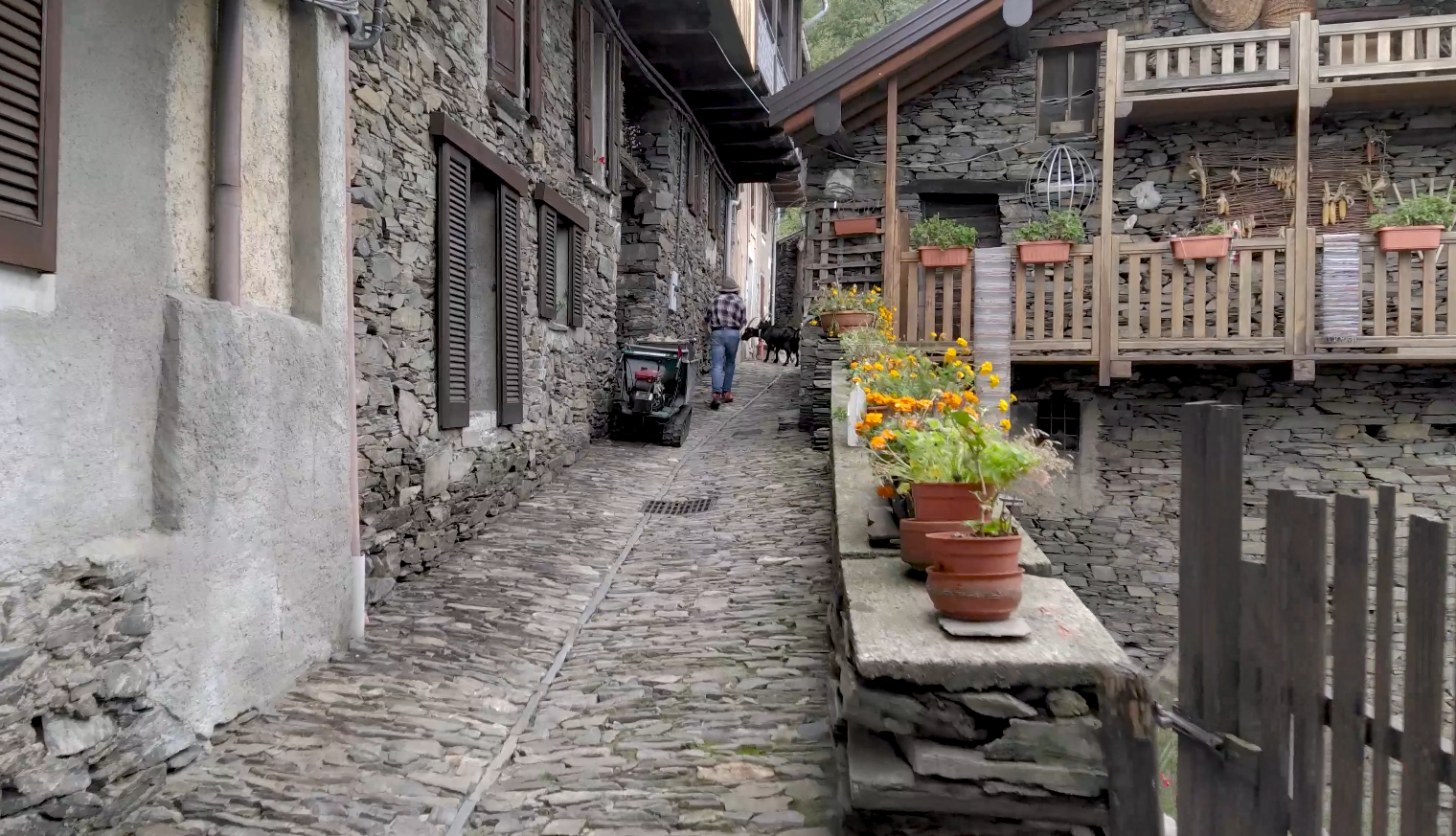 The picturesque village has a distinct Alpine feel. /CGTN

The picturesque village has a distinct Alpine feel. /CGTN

Inaccessibility and tough living conditions have never been an impediment for Lucia Cassina – the woman who, according to many, is the true soul of the village. Despite being 75 years old, she often walks the path to the nearest village, Curiglia, to visit her children down in the valley.

"I like to travel the world," she explains. "I also like to wear heels sometimes. I like to go to the theater. But my future is here." 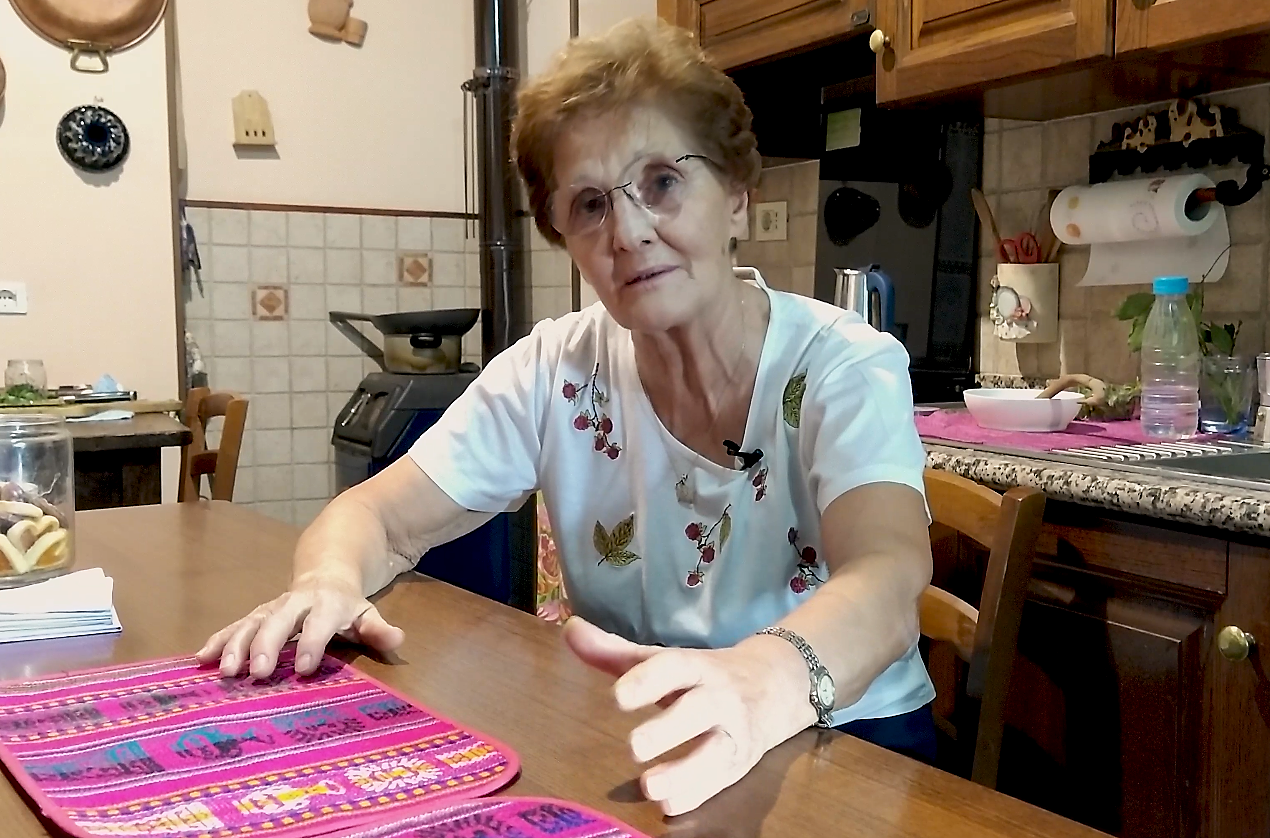 Lucia Cassina, according to many, is the true soul of the village. /CGTN

Lucia Cassina, according to many, is the true soul of the village. /CGTN

"Several years ago, like many others, I left home to work down in the valley. But every Saturday, with my children by the hand, I would walk along the mule track back to my house in Monteviasco. Coming back here was my medicine, and then I could face the working week."

Chopping parsley from her vegetable garden and putting the vegetables on the wood-burning stove, Lucia explains that when she got old, she and her husband decided to return to Monteviasco. "It was like coming home after so many years," she says. 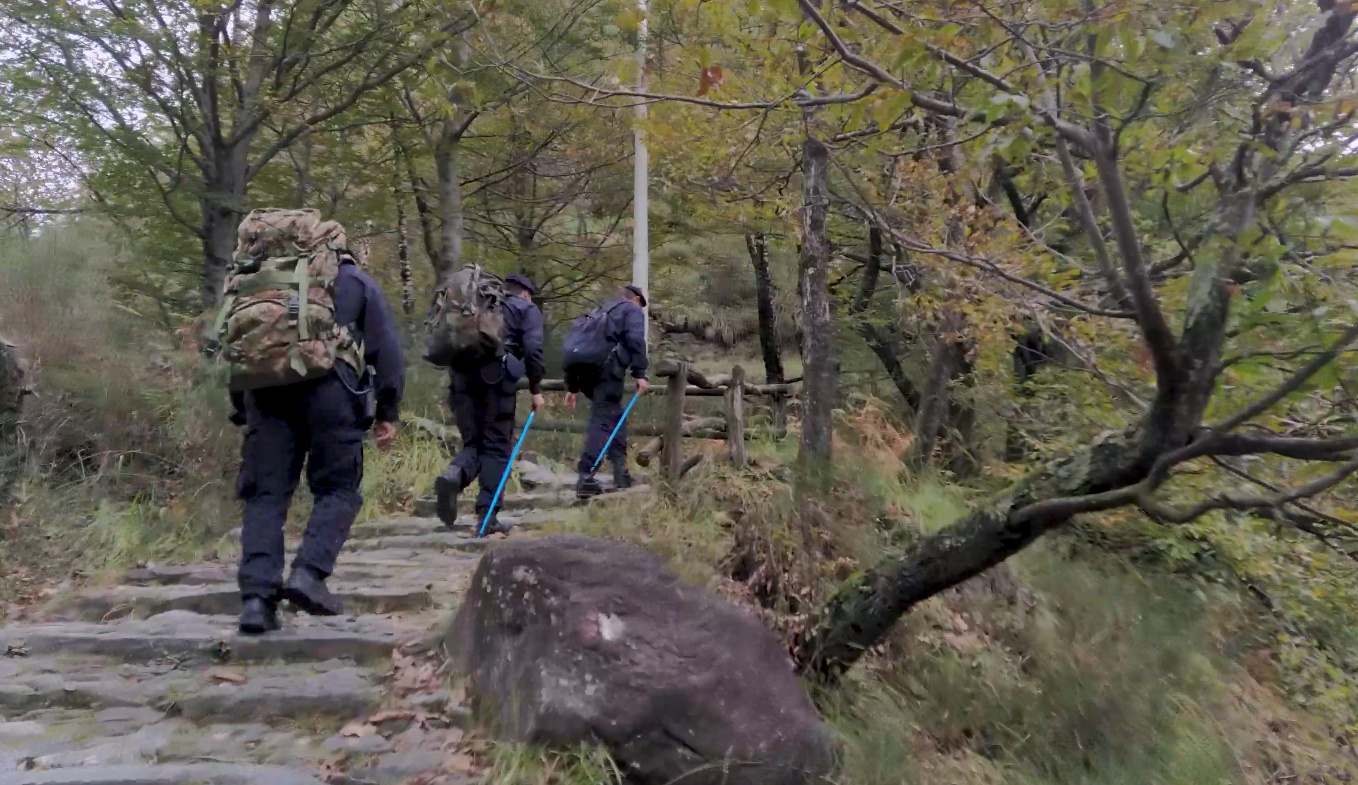 The Carabinieri gendarmerie corps bring supplies on foot after the landslide in August 2020. /CGTN

The Carabinieri gendarmerie corps bring supplies on foot after the landslide in August 2020. /CGTN

But the streets of Monteviasco do not only reverberate to the footprints of the half-dozen highlanders who live there. In recent years, tourists – along with those who had origins in the village – have bought up many of the old houses to spend their holidays or weekends, and to save the village from complete depopulation.

"Both in the past and in the present, those who bought the house here have also acquired the whole package of the village," says Cassina. "Together we took care of this place, keeping it clean and tidy, and organizing events, exhibitions, concerts.

"To live here you have to truly love this place. And above all, you must respect it. Otherwise, you don't fit in. This is like a family". 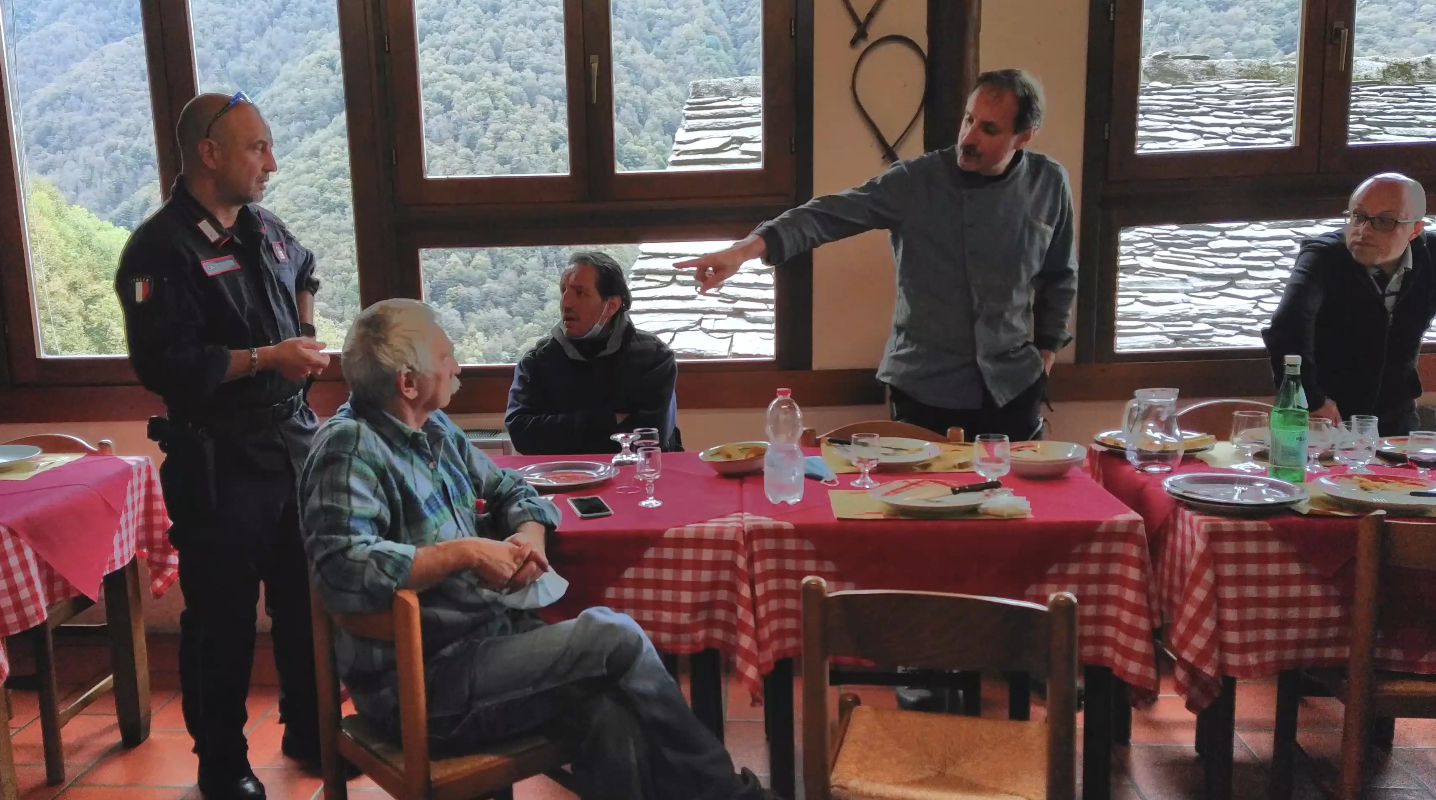 Part of that family are Barbara Ragazzi and Roberto Tosi, who have decided to open the restaurant Il Vecchio Circolo, the only business still operating in the village. "I was born in Monteviasco, and I came back here after working for a long time in Switzerland," says Tosi. "It was a decision that changed my life – because I'm not a cook!"

Since the cable car went out of service, the number of customers has dropped dramatically, "but some of our old customers walk 50 or 60 minutes to come here to eat," says Ragazzi. "They are in love with Monteviasco and have become our friends. They want to sit here with us, chat with the other guests and eat homemade food.

"Despite the real hardship caused by the ending of the cable car, this event was definitely a way to strengthen the relationships within this small community. Let's hope that we don't have to close, and that we can keep this village alive."

• Racing against time to salvage the precious Stradivarius violin trees

• '80 years left' to save Alpine glaciers