· Italy's Lazio region is expected to introduce a midnight to 5 a.m curfew on Friday as infections continue to surge in the area.

· Portugal's government has announced the municipalities of Felgueiras, Lousada and Pacos de Ferreira will be put under a partial lockdown from Friday to contain the local outbreaks in those regions.

· Sweden's government is to limit the number of people attending nightclubs to 50 as the country's Prime Minister Stefan Löfven said, "the parties at the nightclubs are over now."

· The UK plans to pay 62 percent of the wages lost from employees working reduced hours during lockdown.

· The wearing of face masks is to be made mandatory in all areas in Cyprus, except while exercising.

· Germany has issued travel warnings for Switzerland, Ireland, Poland, most of Austria and many Italian regions, including the capital Rome.

· Czechia's government is likely to call for an extension on its state of emergency that is due to run out on November 3, Health Minister Roman Prymula said.

· A study, led by experts at King's College London suggests that women aged between 50 and 60 are at the highest risk of developing 'long COVID' or longer-lasting health problems from the virus.

· Belgium's foreign minister Sophie Wilmes, who tested positive for the virus last week, has been admitted to intensive care with her office saying her condition is "stable."

· Czechia has entered a partial lockdown on Thursday as new infections continue to overwhelm the health system. The government has ordered most shops and services to close and sought to limit movement to essential journeys.

· Toilet paper sales rose by 89.9 percent in Germany last week, whilst soap sales rose by 62.3 percent as people brace themselves for a potential second lockdown.

· An Italian shoemaker, renowned for his 24 carat gold shoe, has decided to create a face mask made with gold leaf to raise money for a children's hospital. 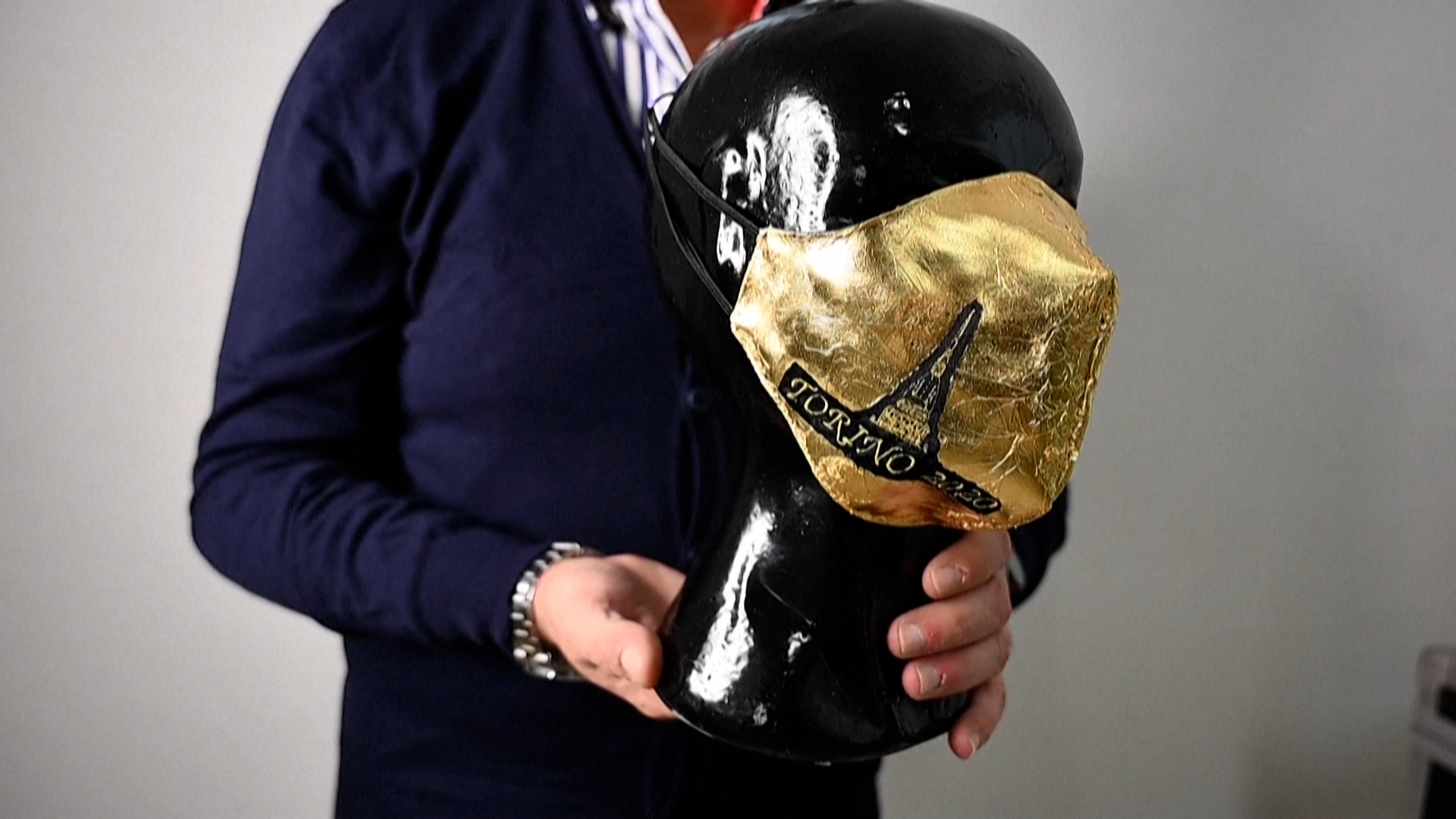 An Italian shoemaker, renowned for his 24 carat gold shoes, has decided to create a mask made with gold leaf to raise money for a children's hospital. /AFP

An Italian shoemaker, renowned for his 24 carat gold shoes, has decided to create a mask made with gold leaf to raise money for a children's hospital. /AFP

Lombardy will begin a regional curfew tonight from 11 p.m to 5 a.m tomorrow as Italy tries to slow COVID-19 infections. Italy recorded 15,199 cases on Wednesday, a record number of new infections.

Two of the nation's biggest cities, Milan and Naples, will be under curfew, after Campania, where the latter is situated, initiated restrictions on Tuesday. Rome will also undergo a nightly shutdown when a regional curfew begins in the region of Lazio at midnight on Friday.

After announcing new restrictions last weekend, Prime Minister Giuseppe Conte addressed the Senate on Wednesday, he told Italians to limit unnecessary travel to reduce the spread of infection and reiterated he didn't want to implement another national lockdown. He will address Italy's chamber of deputies on Thursday morning about further measures that the government will adopt to try to curb the virus.

Meanwhile, a golden shoemaker has turned his hand to mask making.

Antonio Vietri's 24 carat gold shoes are on sale in China and UAE, but amid the pandemic he's created a mask made from gold leaf.

The idea is for people to donate $118 to a children's hospital in Turina, which will them put them into a draw to win the mask.

Finance Minister Rishi Sunak has announced further aid, worth billions of dollars, to businesses struggling with the resurgence of the pandemic.

Sunak told the UK parliament the government will pay retrospective cash grants of up to $2,750 per company currently operating under the "Tier 2" restrictions or above in a bid to help hospitality companies and the self-employed.

Meanwhile, the regions of Greater Manchester and South Yorkshire are preparing to enter "Tier 3" local lockdowns by the weekend. Scotland has extended its restrictions for another week ahead of introducing a tier system, while Wales has gone the furthest with a two-week "firebreak" lockdown starting on Friday that will close all non-essential businesses and ban most trips outside the home. 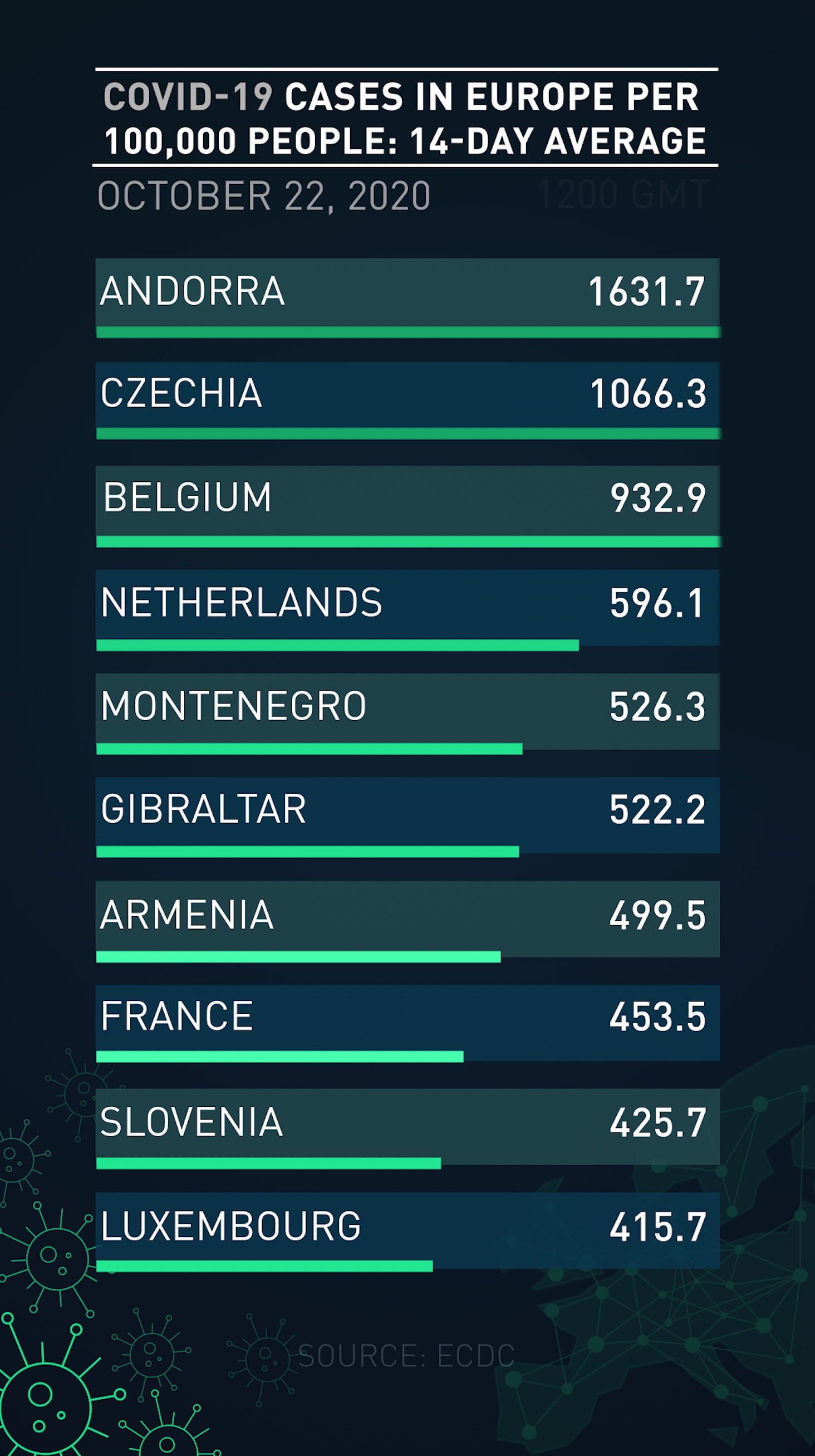 Spain has become the first country in Western Europe and sixth globally to pass one million confirmed cases of COVID-19.

The official figures came through on Wednesday evening local time and showed as of October 21, Spain had a total of 1,005,295 infections following an increase of 16,973 over the previous 24 hours.

Meanwhile on Thursday, a vote is expected on the no confidence motion or "moción de censura" filed by the righwing Vox party against the government of Pedro Sanchez and its handling of the pandemic.

Previously there have been just four moción de censura since the return to democracy in 1975. The last was brought by Pedro Sanchez's PSOE party in 2018 and helped oust the previous PM Mariano Rajoy.

The lockdown chorus is growing louder in Belgium. The country's COVID-19 spokesperson Yves van Laethem said the country could be forced into "another lockdown by the end of next week" if the trends don't improve.

He made the comments on LN24 TV. The government is expected to put new restrictions on sport and cultural activities at a meeting on Friday as case numbers continue to surge. The country recorded 13,227 new infections in the past 24 hours.

Hospitals in the provinces of Liège, Walloon Brabant, Luxembourg and Brussels are becoming saturated with COVID-19 patients, with an occupancy rate approaching 40 percent, according to Le Soir. One of those patients is the former Prime Minister Sophie Wilmes who was moved to a Intensive Care Unit on Thursday morning.

A spokesperson said her condition is stable but requires professional supervision.

Meanwhile, a new report by the Federation of Catholic Education shows that nearly a quarter of Belgium's teachers (23 out of 100) are sick or in quarantine. Schools are switching to "code orange" meaning extra safety measures and  some hybrid classes. 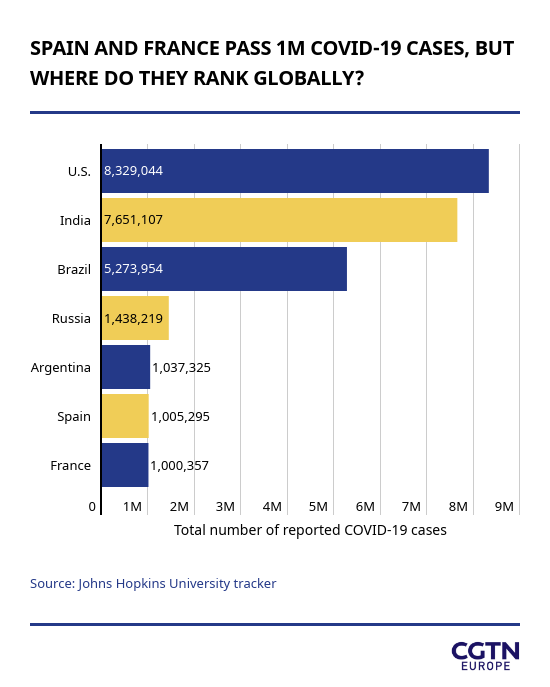 CGTN America: Stimulus for U.S economy may wait until after election - sources