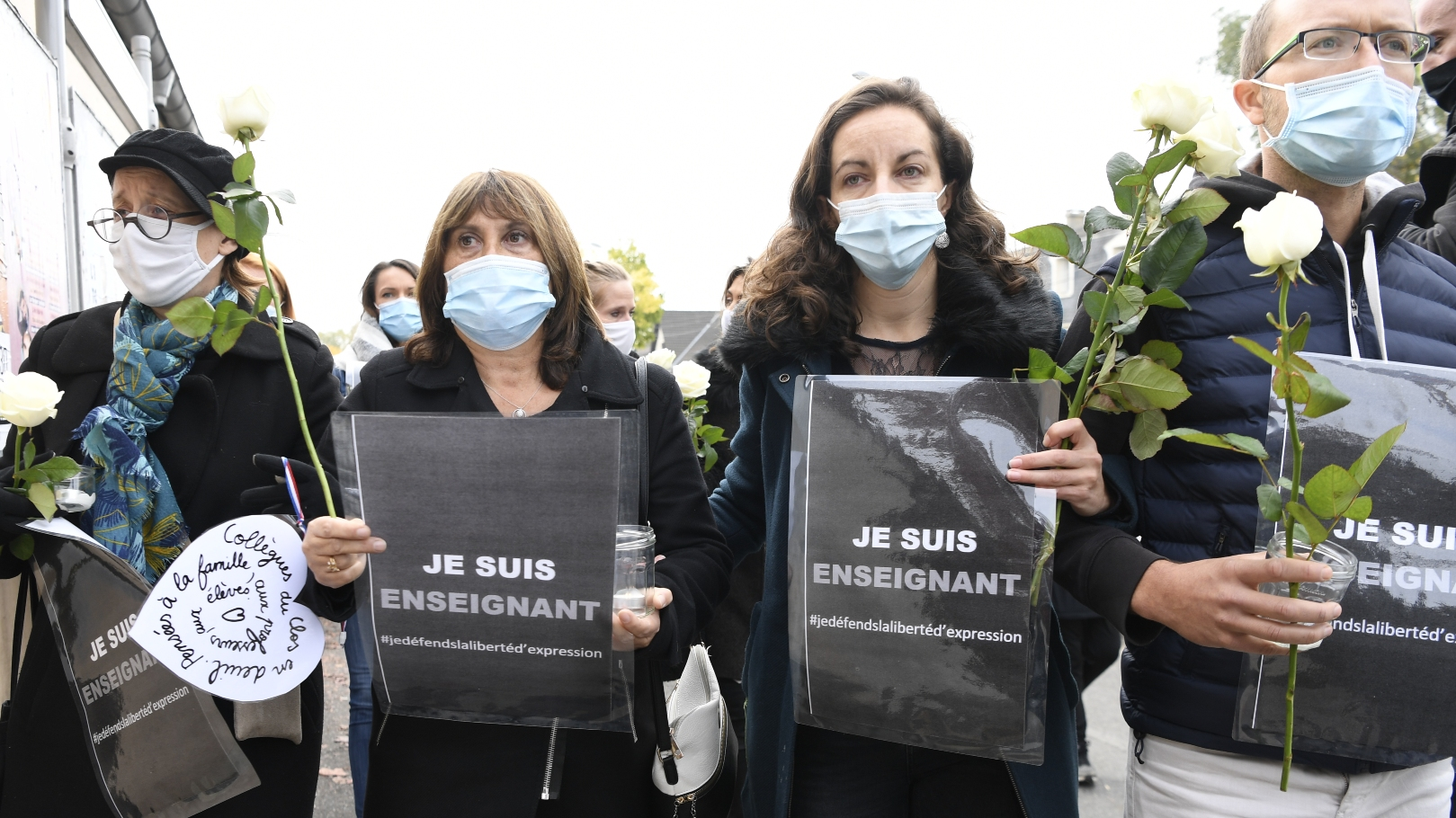 People hold a sign reading 'I am a teacher - Freedom of speech' in front of a middle school in Conflans Saint-Honorine./Bertrand Guay/AFP

People hold a sign reading 'I am a teacher - Freedom of speech' in front of a middle school in Conflans Saint-Honorine./Bertrand Guay/AFP

France will react with the "greatest firmness," Prime Minister Jean Castex said after a teenager was suspected of the killing of a school teacher who had shown pupils cartoons of the Prophet Muhammad.

"Through one of its defenders, it is the republic which has been struck in the heart by Islamist terrorism," Castex tweeted.

"In solidarity with its teachers, the state will react with the greatest firmness so that the republic and its citizens live, free! We will never give up. Never."

The victim has been named as Samuel Paty, a 47-year-old history teacher working in the suburbs of Paris.

The 18-year-old suspect, who was shot dead by police, was born in Moscow and from Russia's southern region of Chechnya, a judicial source has told AFP.

The total number of arrests has increased to nine, anti-terror prosecutors confirmed, including the grandparents, parents and brother of the suspect. The two detained parents are believed to have signaled their disagreement with the teacher's decision to show the cartoons.

The other people detained for questioning are members of the suspect's social circle but not family members. 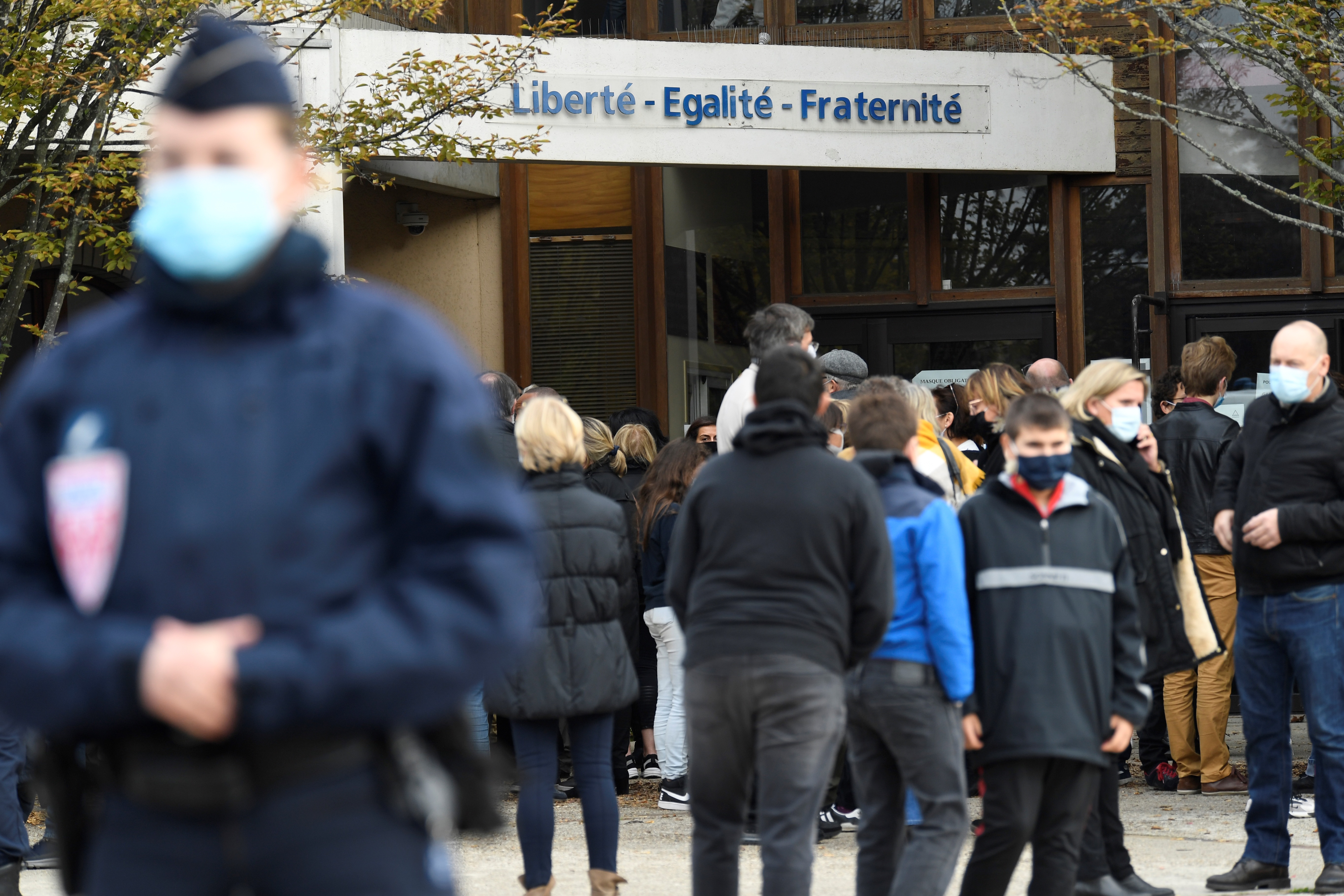 Police stand guard as members of the public leave tributes outside the school. Bertrand Guay/AFP

Police stand guard as members of the public leave tributes outside the school. Bertrand Guay/AFP

President Emmanuel Macron also called on the French to stand together and pledged quick and strong action.

"One of our fellow citizens was murdered today because he was teaching students freedom of expression," said Macron, after visiting the school in Conflans-Sainte-Honorine hours after the attack struck.

Prosecutors announced they were treating the incident, at around 5 p.m. local time on Friday, as "a murder linked to a terrorist organization." Samuel Paty was killed on Friday after showing pupils cartoons of the Prophet Muhammad. Bertrand Guay/AFP

Samuel Paty was killed on Friday after showing pupils cartoons of the Prophet Muhammad. Bertrand Guay/AFP

Four people, including a minor, were initially arrested. Those held were related to the alleged assailant, who was shot dead by police following the murder.

Police had received a call about a suspicious individual loitering near the school and on arrival they found the dead man and, 200 meters away, was the suspect armed with a knife-like weapon who threatened them. 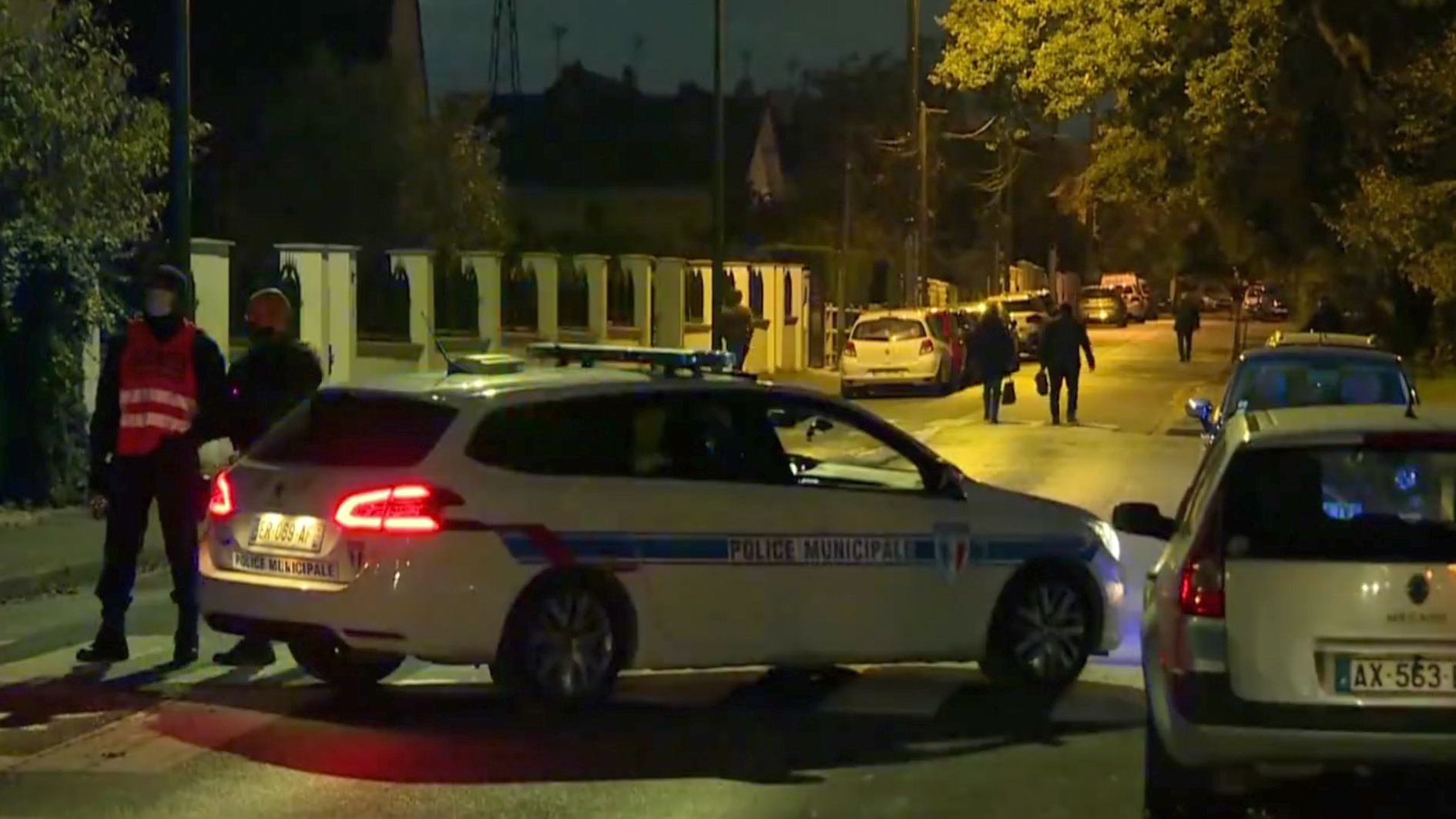 The killing comes as security forces have been on high alert during the ongoing trial of suspected accomplices of the attackers in the January 2015 terror attacks in Paris, which also saw a policewoman gunned down in the street.

It also comes just days after a follower of the ISIL militant group who attacked a police officer with a hammer outside the Notre-Dame cathedral in Paris was sentenced to 28 years in jail.

And last month, charges were brought against a 25-year-old Pakistani man after he wounded two people with a meat cleaver to avenge the publication of caricatures of the Prophet Mohammed by Charlie Hebdo, which purportedly prompted the 2015 killings.

Seventeen people were killed in the three-day spree that heralded a wave of Islamist violence in France that has so far claimed more than 250 lives.