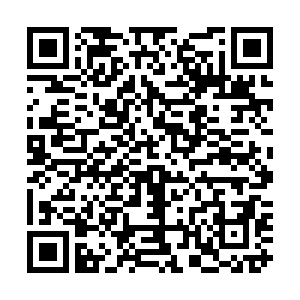 • Germany's daily case tally rose by 3,483 on Saturday, as a partial curfew on bars and restaurants went into effect in both Berlin and Frankfurt.

• Daily infections in France have jumped to over 26,000 for the first time, as new local restrictions including bar closures come into effect in Lille, Lyon, Grenoble and Saint-Etienne.

• Lithuanians are being encouraged to bring their own pens to minimize infection risk as they vote in Sunday's parliamentary election, seen as a test of confidence in the government's handling of the pandemic.

• As Czechia reported record daily case numbers for the fourth day running and the fastest two-week growth per 100,000 inhabitants in the EU, the government will announce new lockdown measures on Wednesday.

• The Spanish regions of Catalonia and Navarre are set to bring in new restrictions on working and public gatherings as case numbers rise quickly.

• With UK Prime Minister Boris Johnson to announce potential new restrictions on Monday including rules on travel between virus hotspots, city mayors are set to be given more control over Britain's pandemic response.

• Spain's Prime Minister Pedro Sanchez has appealed for unity in the fight against coronavirus after the far-right Vox party threatened to take legal action against Madrid's partial lockdown.

• Pope Francis has called for the economic recovery from the coronavirus to be a sustainable one, urging people to pull investments from companies that are not committed to protecting the environment.

• The widely used BCG tuberculosis vaccine will be trialed on frontline care workers in the UK for its effectiveness against the coronavirus.

• Ireland has reported its highest daily case number since the start of the pandemic, 1,012, as neighbouring Northern Ireland records some of the highest infection rates in Europe. 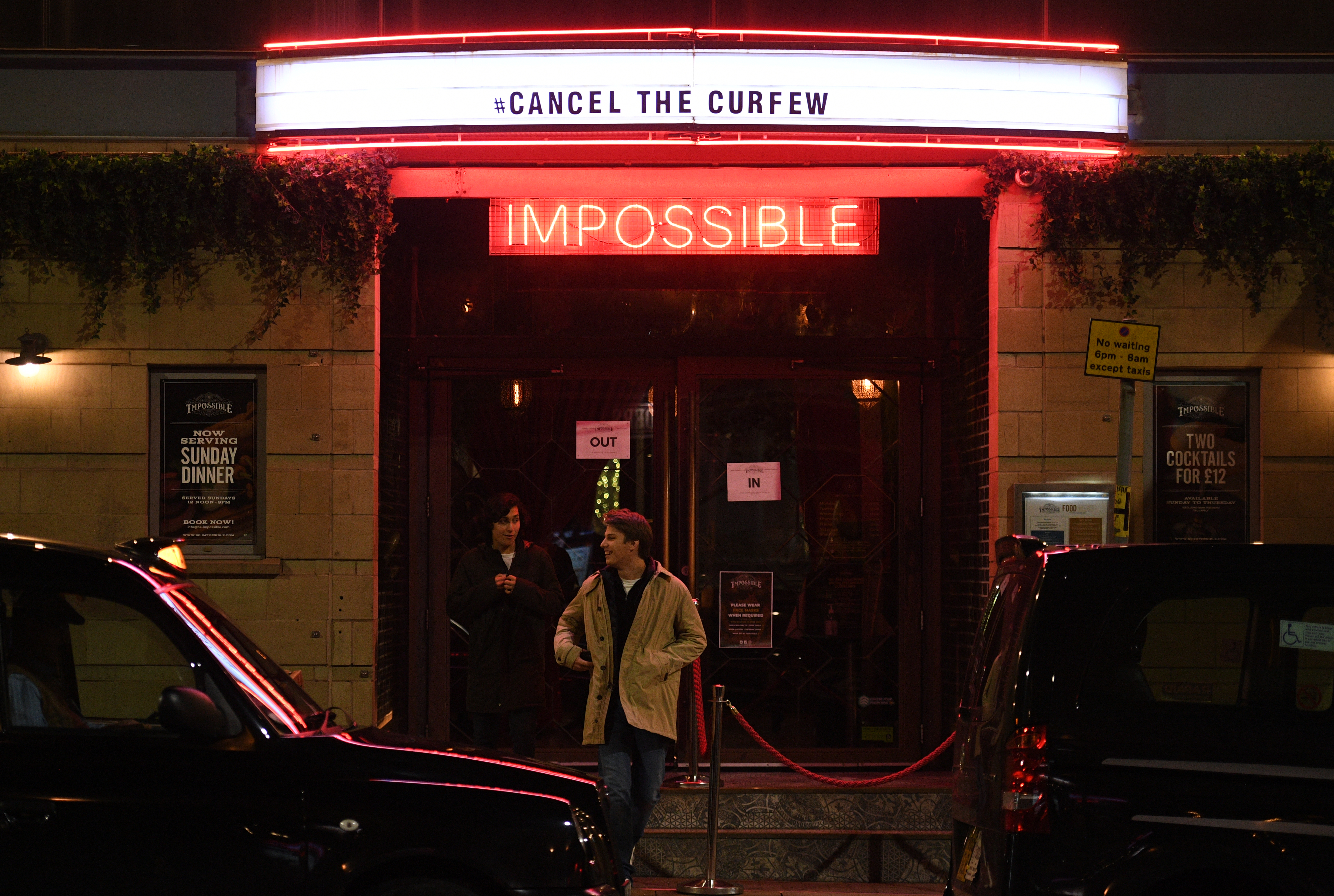 As part of new measures to control the virus' spread in Berlin and the financial hub of Frankfurt, bars, restaurants and late night shops will now close at 11 p.m. and 10 p.m. in the respective cities.

The restrictions in the German capital – currently reporting more than 400 new cases daily – will affect all shops except pharmacies and petrol stations, which have been banned from selling alcohol.

The rules also include a five-person limit on people meeting outside after hours and will last until at least 31 October. Businesses that violate the curfew in one of Europe's most popular nightlife destinations have been threatened with fines of up to $5,900.

On Friday, Chancellor Angela Merkel and mayors from Germany's 11 largest cities agreed to bring in tighter anti-coronavirus measures if infections go above 50 cases per 100,000 population.

The government's top priority, the chancellor said, was to avoid the economic impact of full lockdowns, adding that she would meet with city mayors again in two weeks to review whether the measures had been effective. 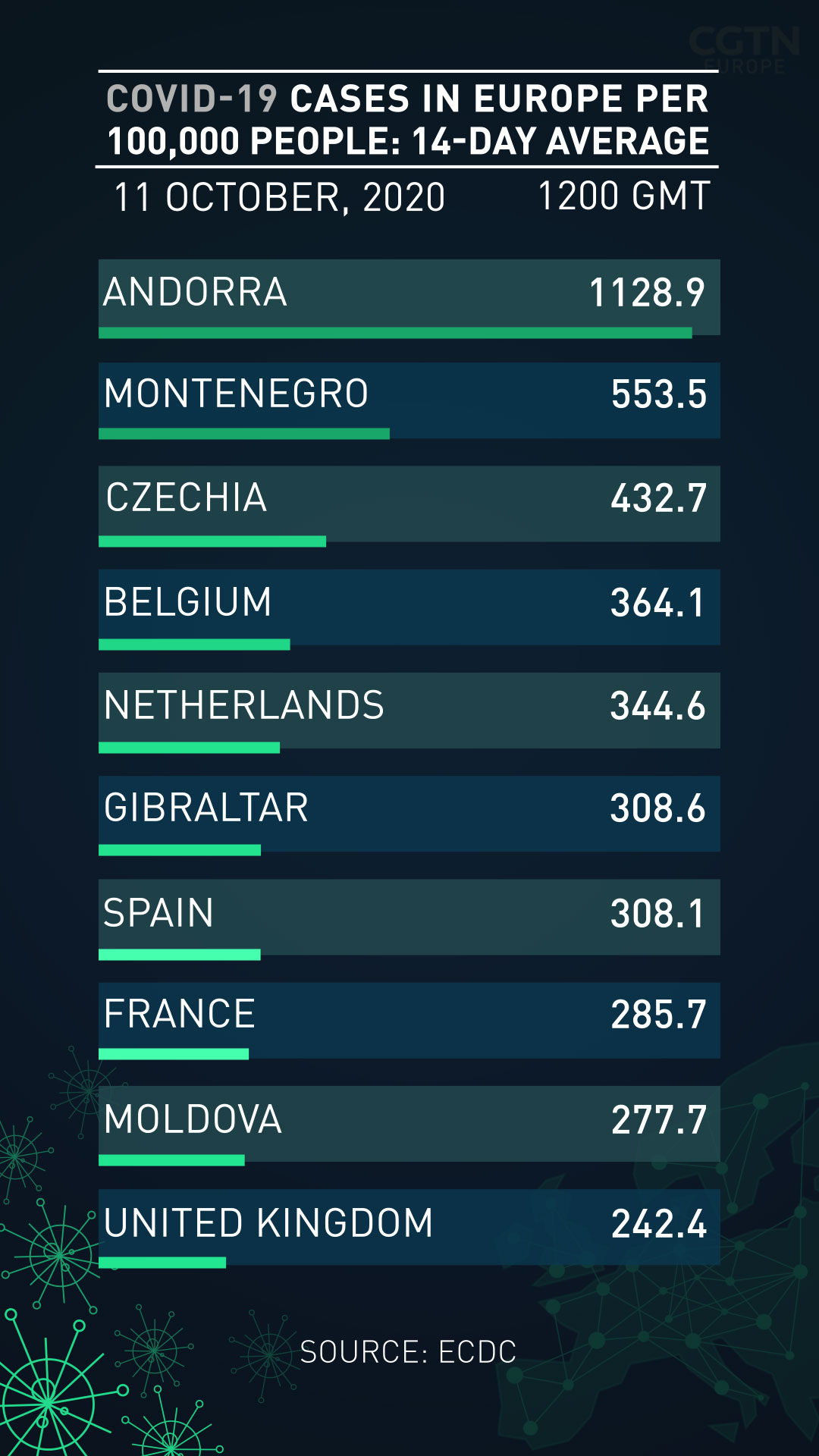 Czechia will bring in new lockdown measures on Wednesday after reporting the fastest two-week growth in coronavirus cases per 100,000 inhabitants in the EU and hitting record numbers four days in a row.

"We have to decide on further measures. That will happen on Monday at the government session, and the measures will be effective from Wednesday," Prime Minister Andrej Babis said in a video message on YouTube. He did not give any details on the measures.

"We don't want to switch off the economy. We want to have it (the measures) more targeted... We will limit contacts and gatherings of people," she said.

By reaching out to local authorities, Johnson's administration appears to be trying to contain both a surge in cases and growing anger in parts of northern and central England over tighter restrictions brought in over recent weeks.

Robert Jenrick, Britain's housing minister, refused to give specifics of the measures, but said there would be more guidance on travel and local leaders would be more involved in the UK's heavily-criticized contact tracing system.

"In addition to the basic simple rules that apply to the whole country, we are designing a framework for those places for where the virus is very strong," Jenrick told Sky News.

It is expected that a three tier-system will be employed to try to simplify the rules, which critics say have been too confusing and often implemented without the consultation of local leaders.

"We want the strongest possible working relationship now between central government and local government," he said, "So it's right that we take action in those communities and design the measures in conjunction with people who know those places best."