How do dogs detect COVID-19 and which dogs do it best?
Arij Limam 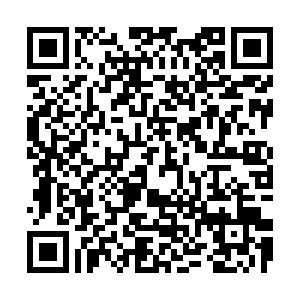 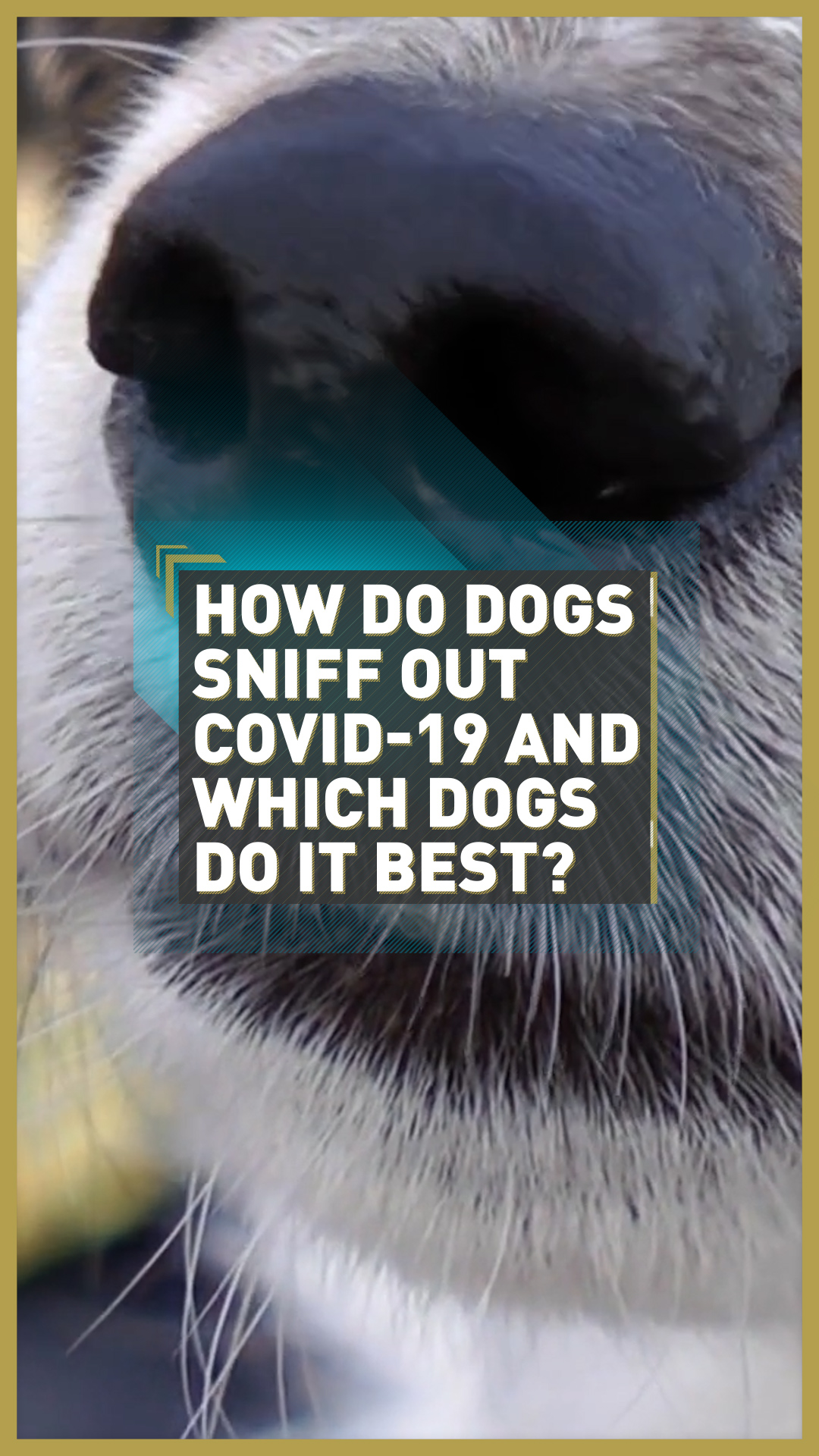 Teams of scientists and researchers around the world are training sniffer dogs to detect COVID-19 in humans.

The method is certainly more friendly than the intrusive PCR test and the antibody test, and it is also starting to prove effective.

In fact, Finland's Helsinki-Vantaa airport is already deploying dogs, including Kössi, a rescue dog from Spain, for their new job in a pilot project running alongside more usual testing at the airport.

In the canine coronavirus test, a passenger swipes their neck with a gauze, places it in a can which is then handed over to another room for Kössi or its colleagues ET, Miina and Valo, to sniff and to deliver an immediate result in minutes by scratching a paw, laying down, barking or otherwise making its conclusion known. Passengers who volunteer for the test are told to also take a free PCR test to confirm the result. 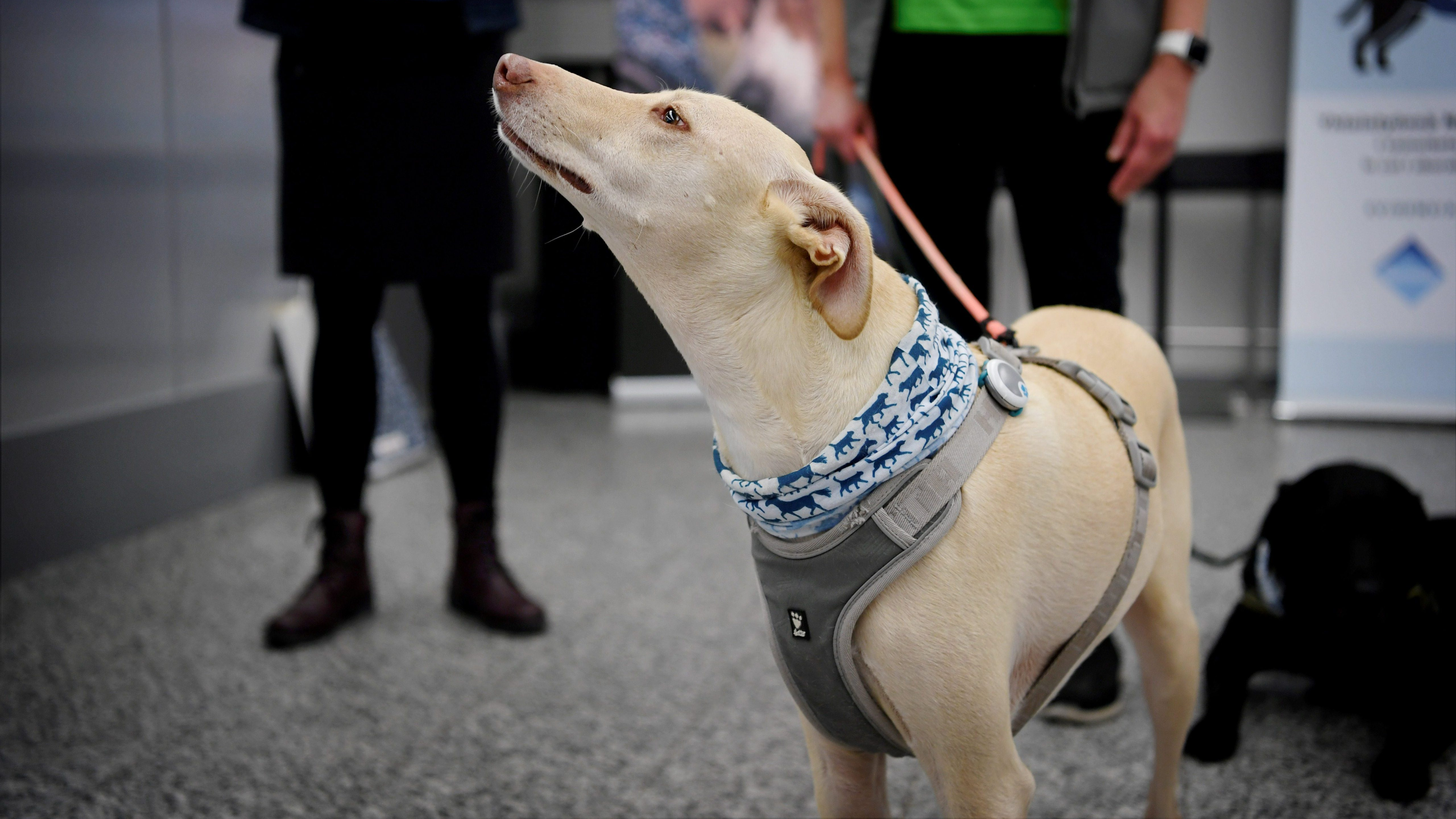 Kössi is one of the dogs working to detect COVID-19 in passengers at Finland's Helsinki airport. /Antti Aimo-Koivisto/Lehtikuva/AFP

Kössi is one of the dogs working to detect COVID-19 in passengers at Finland's Helsinki airport. /Antti Aimo-Koivisto/Lehtikuva/AFP

"They are very good (at it). We come close to 100 percent sensitivity," said Anna Hielm-Bjorkman, a professor at the University of Helsinki specialized in clinical research for companion animals, referring to the dog's ability to detect cases of the virus.

"What we've seen in our research is that the dogs will find (the disease) five days before they (patients) get any clinical symptoms," Hielm-Bjorkman added.

The Finnish trial is one of the largest so far in testing the effectiveness of this new, cost-friendly, quick and promising testing method that has the potential to be deployed worldwide.

Finland is the first country in Europe to assign dogs to sniff out the virus as a pilot stage, and the second in the world, following a similar program which started at Dubai International Airport over the summer.

How do they do it?

"So, a dog's sense of smell is around thousands of times more powerful than a human's," veterinary surgeon, Gudi Stuttard, told CGTN Europe, explaining the science behind how man's best friend can also sniff diseases.

"Proportionally their noses are much bigger than a humans. So they have a huge surface area of olfactory mucosa, or lining," Stuttard said.

"So every time they take a breath and sniff, that large area is sensing all the smells in that sniff. Within that lining, they have around two to 300 million olfactory receptors to be able to detect the odors, compared to our six million," she added.

It's not just their noses that make them effective at the job, it's also the area of their brain that's responsible for processing smell, which is around 40 times larger than the size of a human's.

All these amazing features in dogs make them more aware of smells in a way that humans cannot understand.

"And what it means is that they can potentially detect changes in the odor profile of people with particular diseases," Stuttard explained.

"And if they can do that, then it's simply a case of training them to differentiate those odors and then to highlight when they smell them," she said.

Scientists believe that the dogs are able to sniff chemicals produced and released by the body when the virus infects cells, hence testing the sweat of passengers in the Helsinki airport trial.

According to researchers, training the dogs takes only a few weeks, and with the speed at which the dogs are able to identify the virus on carriers, this method could prove very efficient and reliable, with the possibility of wide deployment at airports, ports of entry or transport hubs. 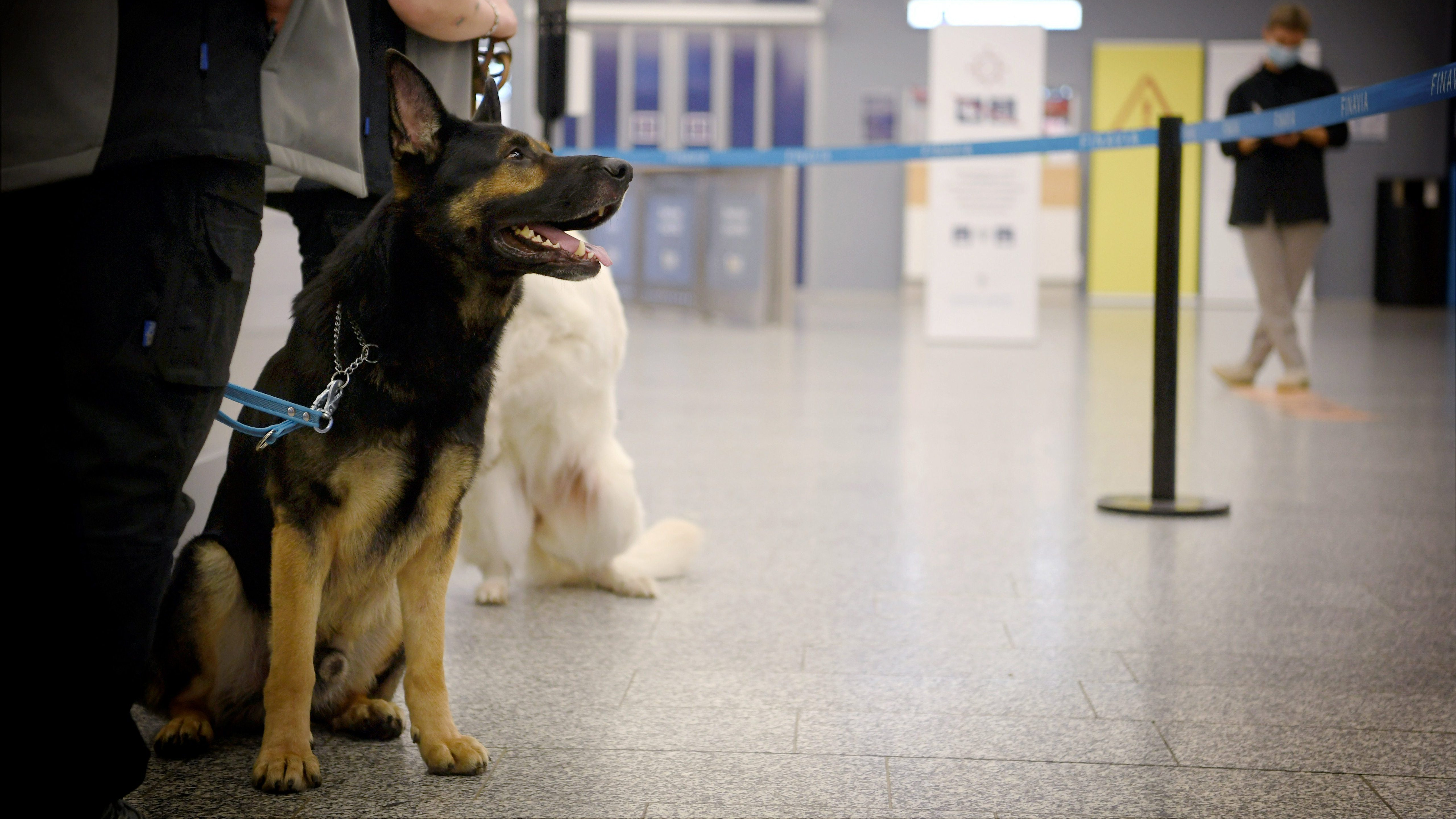 Training the dogs to sniff out COVID-19 in carriers takes up to a few weeks and is proving very effective according to scientists. /Antti Aimo-Koivisto/Lehtikuva/AFP

Training the dogs to sniff out COVID-19 in carriers takes up to a few weeks and is proving very effective according to scientists. /Antti Aimo-Koivisto/Lehtikuva/AFP

Can all dogs do it?

Dog-owners wondering whether their trusted companions could be trained to carry out this very useful job might want to hold off on writing their furry friends' CVs just yet.

According to Gudi Stuttard, while theoretically all breeds of dogs should have this better sense of smell than humans, in practice, certain breeds and individuals of dogs are better candidates for scent detection work.

"There are anatomical differences, so we tend to find that the longer-nosed dogs are generally much better and much more sensitive with their sense of smell than the brachycephalic dogs such as pugs and bulldogs and boxers, for example," Stuttard explained. "So longer-nose breeds tend to be more reliable."

But with a longer nose comes greater responsibility, as the dogs must also show that they have the skills needed for the position.

"Certain breeds and individuals are much more trainable. And that's really important, it's not just about the dog's ability to detect smell, we have to be able to train these dogs and they have to be happy to work with their sense of smell," Stuttard said.

The breeds commonly seen as fit for scent detection work, according to Stuttard, include German Shepherds, labradors, poodles, and spaniels, partly because they have that better sense of smell, but they're also dogs that are really trainable and really happy to work with humans. 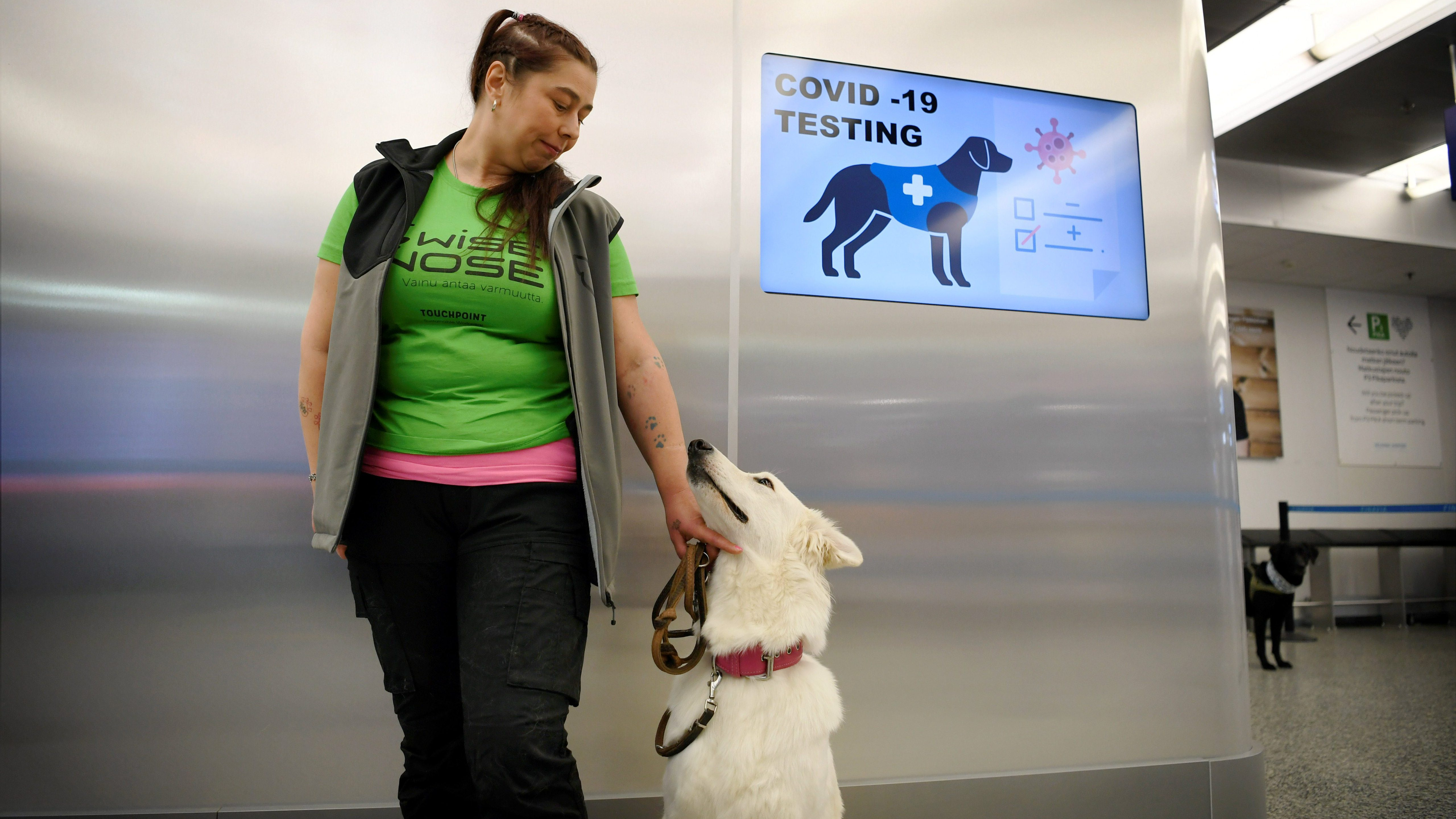 Long-nosed dogs are better at detecting smells and are easier to train for the job. /Antti Aimo-Koivisto/Lehtikuva/AFP

Long-nosed dogs are better at detecting smells and are easier to train for the job. /Antti Aimo-Koivisto/Lehtikuva/AFP

What else can they do?

Humans have known about dogs' abilities to use their nose for a long time, and seeing trained police or military dogs in airports and other public places is a very familiar sight.

Dogs have been trained to help law enforcement in these settings, looking for explosives, for example, or weapons, drugs, and even banned food items.

But Stuttard said that it is only more recently, over the last 15 years or so, that a dog's ability to detect certain diseases was discovered. This is mainly thanks to anecdotal reports from owners who saw their dogs behave differently around them shortly before they were diagnosed with a certain disease.

"There's been lots of research, so we have a charity in the UK, Medical Detection Dogs, who've worked very hard over the last 15 years to hone this ability of dogs to detect the odor profile of different diseases," Stuttard said.

Adding that "we now know it's been proven that dogs are able to detect early in the course of disease these changes and they can detect certain physiological states as well. So, humans with epilepsy, for example, a dog can detect when they have a seizure coming or low blood sugar in diabetic patients."

"So there's all sorts of possibilities and probably a lot that we don't yet know about as well," Stuttard said.