How lethal is COVID-19 compared to cancer, accidents, flu and other causes?
Gary Parkinson 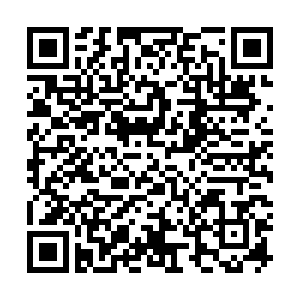 At its worst, COVID-19 killed almost twice as many Europeans per day as cancer – but the latest figures show the fatality rate is back down below accidental death and slightly above pneumonia and diabetes.

We've all been overwhelmed by the numbers flooding out of the news – cases and deaths, naked numbers and rates per 100,000 – and it can be hard to comprehend just how big a problem the pandemic is. Meanwhile, certain groups are claiming the virus is no deadlier than seasonal flu, with some using this as a reason to subvert the safety messages broadcast by worried governments.

Crunching the data from Eurostat, CGTN Europe has compared the various causes of deaths to get an idea of just how lethal the pandemic has been – both on the most recent figures and at its peak... so far.

How the numbers work

As its name suggests, Eurostat is the European Union's statistical office and collates data from across the continent – inside and outside the EU. For ease of reference, these are given per 100,000 of population per year.

However, because we haven't yet had a full year of COVID-19, CGTN Europe has calculated the daily rates of various causes of death and compared them to each country's daily coronavirus fatality toll: the most recent (usually 23 September) and the highest toll so far. We've also sized up the figure to deaths per million of population, and beyond the EU28 (the current 27 EU members plus the UK) we've included European Free Trade Association members Iceland, Liechtenstein, Norway and Switzerland, plus Serbia and Turkey.

As a benchmark, the data reveals that from all causes, every day across the EU28 there are 27.27 deaths per million (although rates vary from Switzerland's 22.2 to Bulgaria's 43.77). Under normal circumstances, the biggest killer is cancer, with 7.08 deaths per million among the EU28 – again, ranging from 5.29 in Cyprus to Hungary's 9.44. 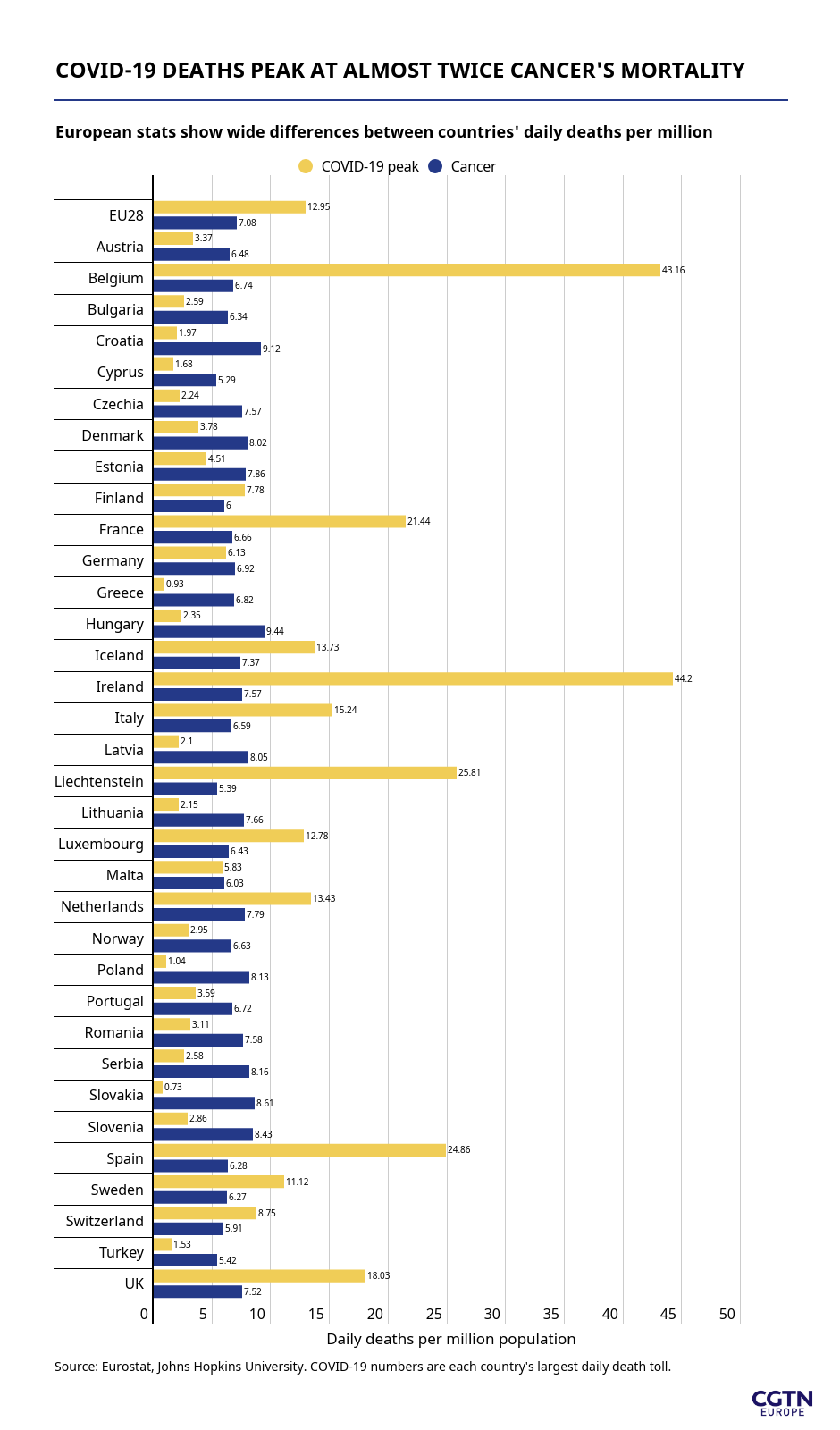 However, peak COVID-19 killed almost twice as many Europeans as cancer: on each country's most lethal day, it killed 12.95 per million across the EU28. This mortality has varied hugely between countries, though. Of the 34 countries only 12 have had COVID-19 fatalities peaking above cancer; the majority of European nations did not, which goes to illustrate the weight of deaths in those virus-wracked dozen countries.

Taking the most recent data, COVID-19 has slipped back down the mortality listings. The latest figures from Johns Hopkins have the EU28 suffering 0.75 daily deaths per million; again, there is a range, but only Bulgaria (1.73), Czechia (2.24), Romania (2.43), Spain (2.74) and Malta (3.89 – two deaths in a nation of just over half a million) suffered more than one death per million population. 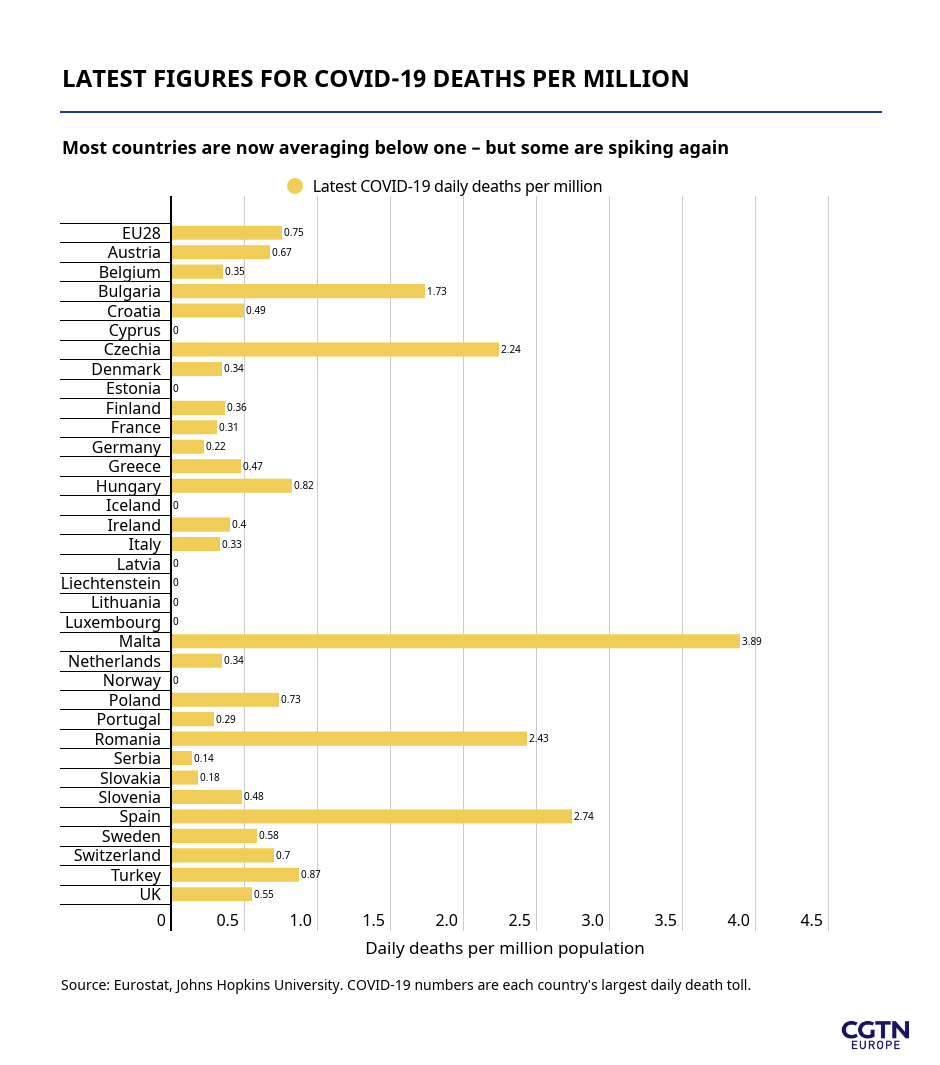 That EU28 figure of 0.75 takes COVID-19 back below several ongoing Eurostat groupings: ischaemic heart disease (2.07 daily deaths per million), nervous system disease (1.16) and accidents (0.87). However, the pandemic is still killing more Europeans than pneumonia (0.7) and diabetes (0.61), approximately twice as many as liver disease (0.39), around three times as many as suicide (0.28) and five times as many as transport accidents (0.15). 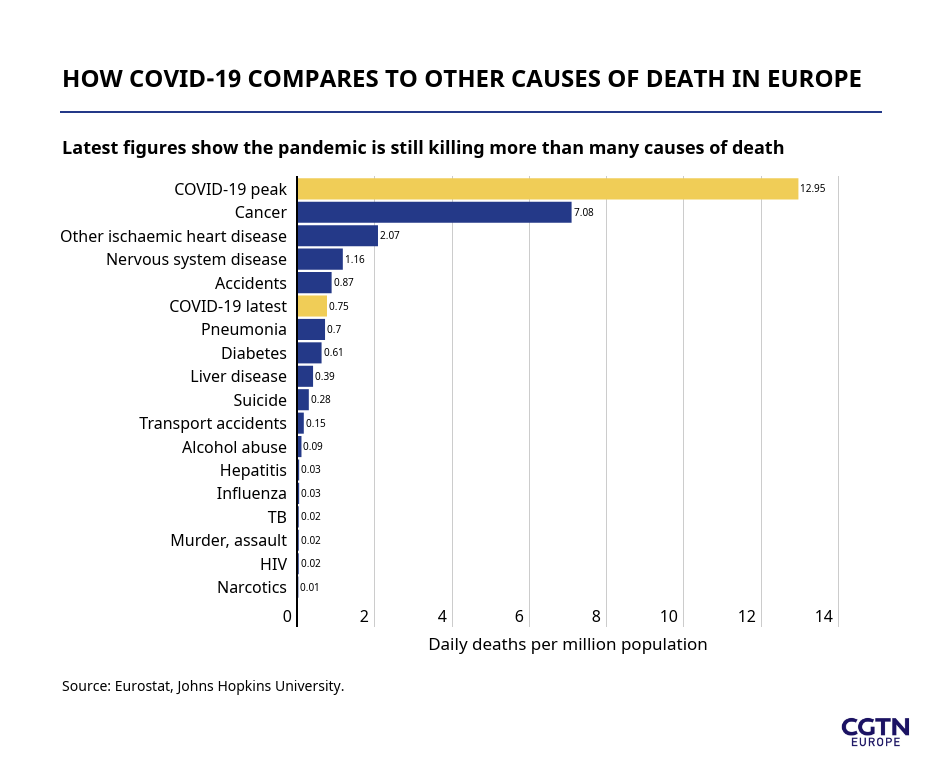 Eurostat also collates deaths from influenza, including swine flu. You may have seen some people on social media minimizing COVID-19 by comparing it to the flu; the figures prove they are hopelessly and dangerously underestimating the pandemic.

Across the EU28, 0.025 people per day die of flu, compared to 0.75 per day on the most recent COVID-19 figures. That makes the pandemic around 30 times more lethal than flu – and that's at its current levels: using the peak figures cited above, COVID-19 killed more than 515 times as many people per day as influenza. 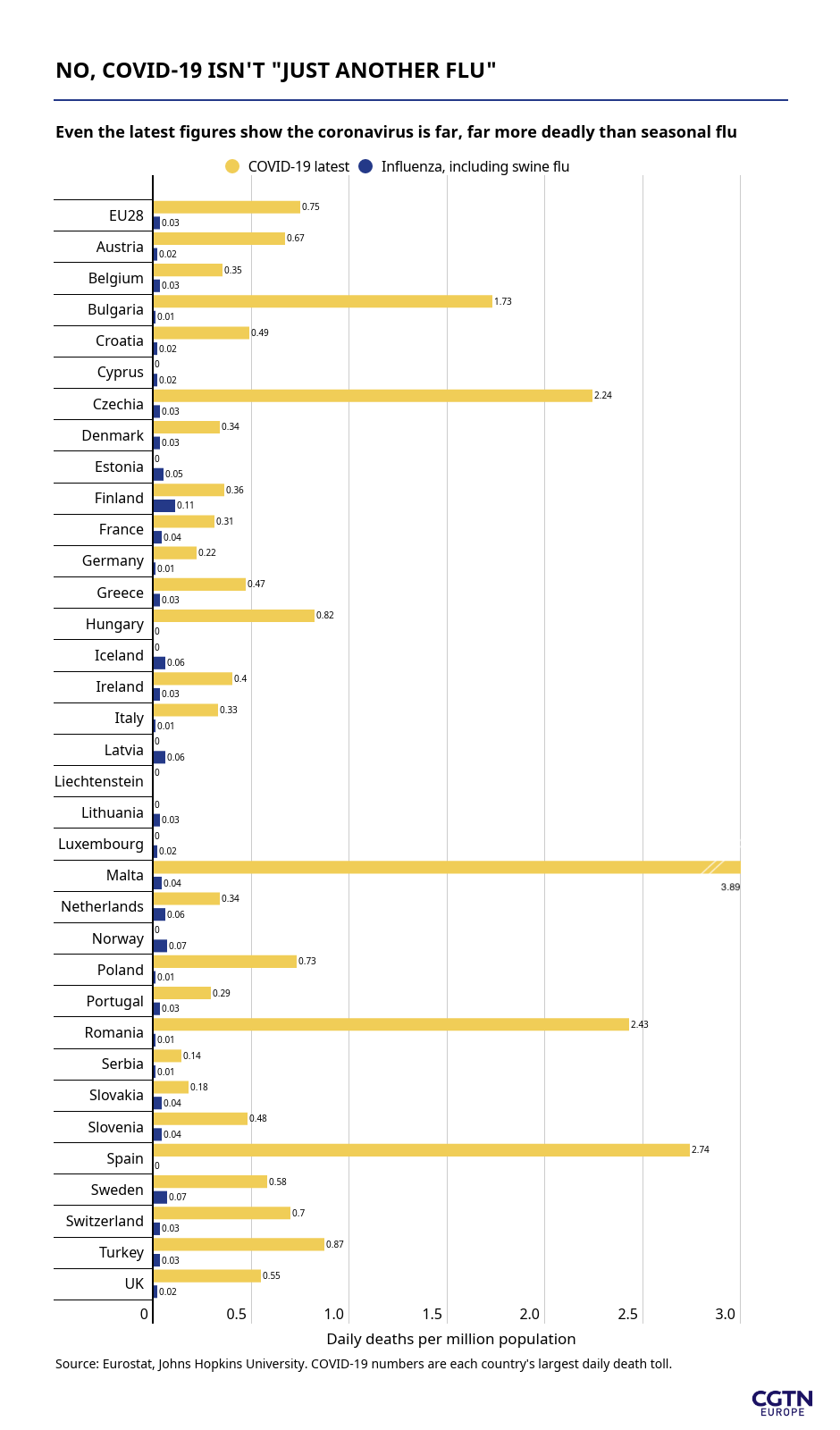 Europe may not be suffering to quite that extent again just yet, but figures are rising again: Spain's current 2.74 daily COVID-19 deaths per million puts the pandemic second only to cancer as a cause of death. As the continent prepares for a second wave, we should all be under no illusion as to how deadly this virus can be.

Methodology: All data from Eurostat, except COVID-19 data from Johns Hopkins University on 24 September. Annual mortality figures are for 2016 – the last full year of confirmed Eurostat data – divided by 366 (days in a leap year) for a daily figure.