Fishy business - what does it mean when fish escape a farm?
Patrick Atack This week an escape of nearly 50,000 salmon from an off-shore Scottish fish farm grabbed the attention of headline writers - but was it as rare an event as it appeared to be?

CGTN Europe spoke to the farm's owners, Mowi, and the Scottish government to find out how important the fish farming business is to Europe's economy, and what impact mass fish escapes have on the local environment. The first question to come to mind when you hear about a fish escape is almost certainly "how did that happen?"

According to Scotland Aquaculture, an arm of the Scottish government's Natural Scotland agency, there have been more than 350 incidents of salmon or trout escaping from farms in the country's waters between 2000 and this year. The reasons behind the breakouts range from "Hole in Net," to "flooding," "human error," and the cause of this week's loss - the weather.

Mowi and the Scottish Environmental Protection Agency said Storm Ellen blew the Carradale North salmon farm off its anchors, moving the large nets even further off the coast of Argyll and Bute and releasing at least 48,000 fish into the wild.

Ian Roberts, a fish farmer with more than 25 years experience and a manager at Mowi, told CGTN Europe evolutions in farming mean more fish can be reared - and in safer environments - but the move off-shore means accidents like this are more of a danger.

"Our company is leading the world in offshore development in Norway and in Scotland. And with that, of course, comes a risk as you start to explore new areas of the sea. It can be a very tough climate to raise fish. It could be very stormy and very wavy."

Mass protests in Berlin and London against COVID-19 restrictions 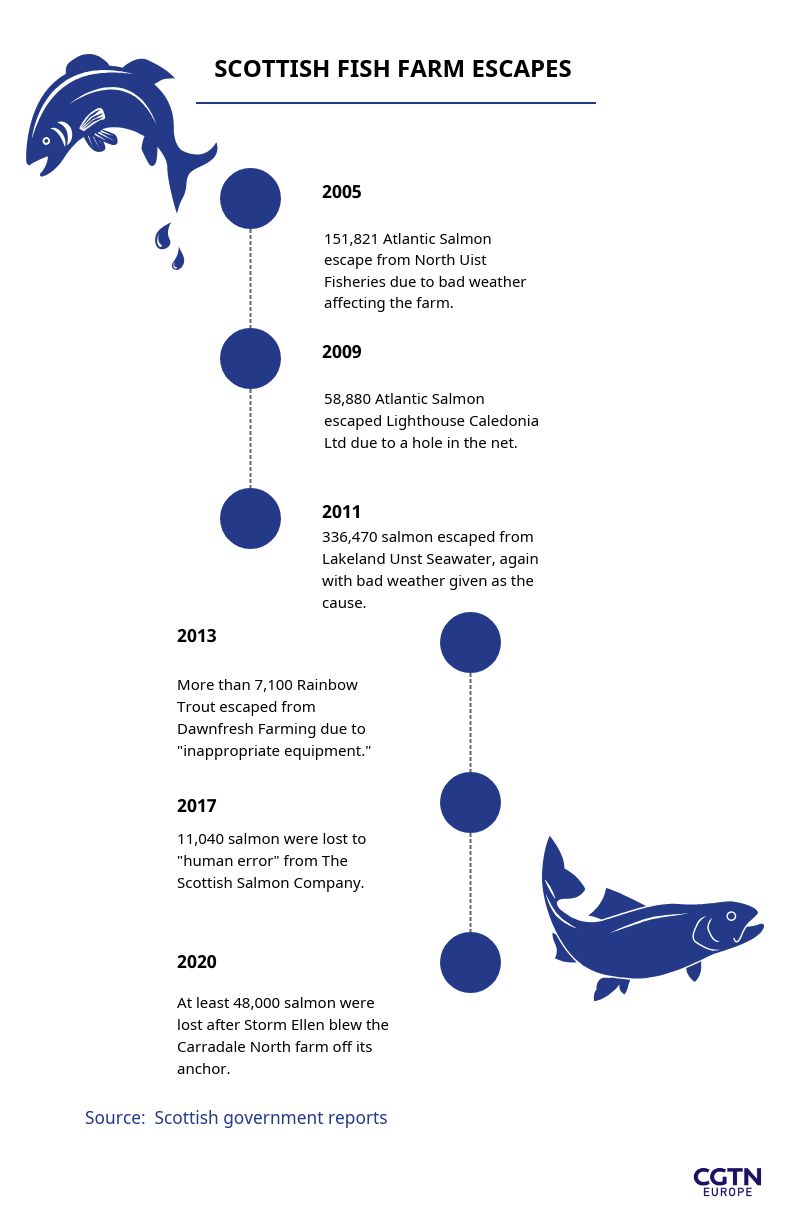 But Roberts said that without this sort of mistake, which could be learned from, the world would struggle to feed the growing human population.

"As any farmer will tell you over the past hundreds of years, you have challenges when it comes to farming. And if we just gave up, didn't overcome those challenges, then you and I wouldn't have much food to choose from in the grocery store," he told CGTN Europe.

But there are also environmental concerns over the practice of aquaculture, to give fish farming its proper name.

Its efficiency is contested because of the amount of wild fish it takes to feed a popular fish stock like salmon. The necessity to keep many fish in one place creates local issues because the waste produced by large groups of stationary fish can damage the ecosystem and oxygen concentration in the water.

According to Sustain, escapes can cause big issues for the local ecology as well. Atlantic salmon, like the fish farmed by Mowi in Scotland and Norway, have been found to breed with wild salmon if they escape. While this might not sound like a big problem, the farmed salmon do not know how to behave in the wild and even pass on that trait to offspring, meaning future generations of "wild" salmon are less likely to survive.

Even if escaped fish don't breed with their wild counterparts, their unnatural presence can put pressure on existing populations by eating their food supply. But when it does go well, farmed fish are a significant part of the European economy.

In 2017 (the latest statistics available) aquaculture was responsible for 41 percent of seafood produced in the European Union, which earned $6.1 billion for the bloc's fishing sector.

As Roberts explained, salmon is the UK's top food export, with a global market.

"From Scotland and from the UK we have large export markets in France and also Germany. Of course, there is strong domestic demand here in the UK and also the United States is becoming a growing market for us as well. There are some smaller volumes, but growing volumes heading to China, also the Middle East, as well is a growing market," he explained.

Although 48,000 salmon escaping might sound bad, Roberts could see the bright side.

"Instead of losing the entire farm, which was about a half a million salmon, we managed to rescue the majority," he told CGTN Europe.

"To lose 48,000 fish is extremely disappointing and obviously hits you financially as well... But in the history of salmon farming and... moving into locations that are very high in energy and difficult to farm unfortunately, we have these incidents. We need to learn from them," he explained.

"I shouldn't understate the importance, that we need to be responsible and keep our fish in the pens. But it has happened before and it will happen in the future again as we start to explore these new parts of the sea to grow salmon."