Recreating the Sun: What is nuclear fusion, is it dangerous and is it likely?
Gary Parkinson 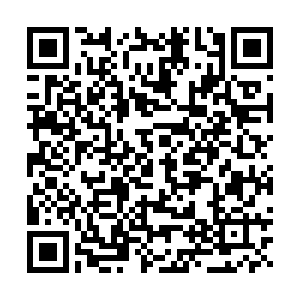 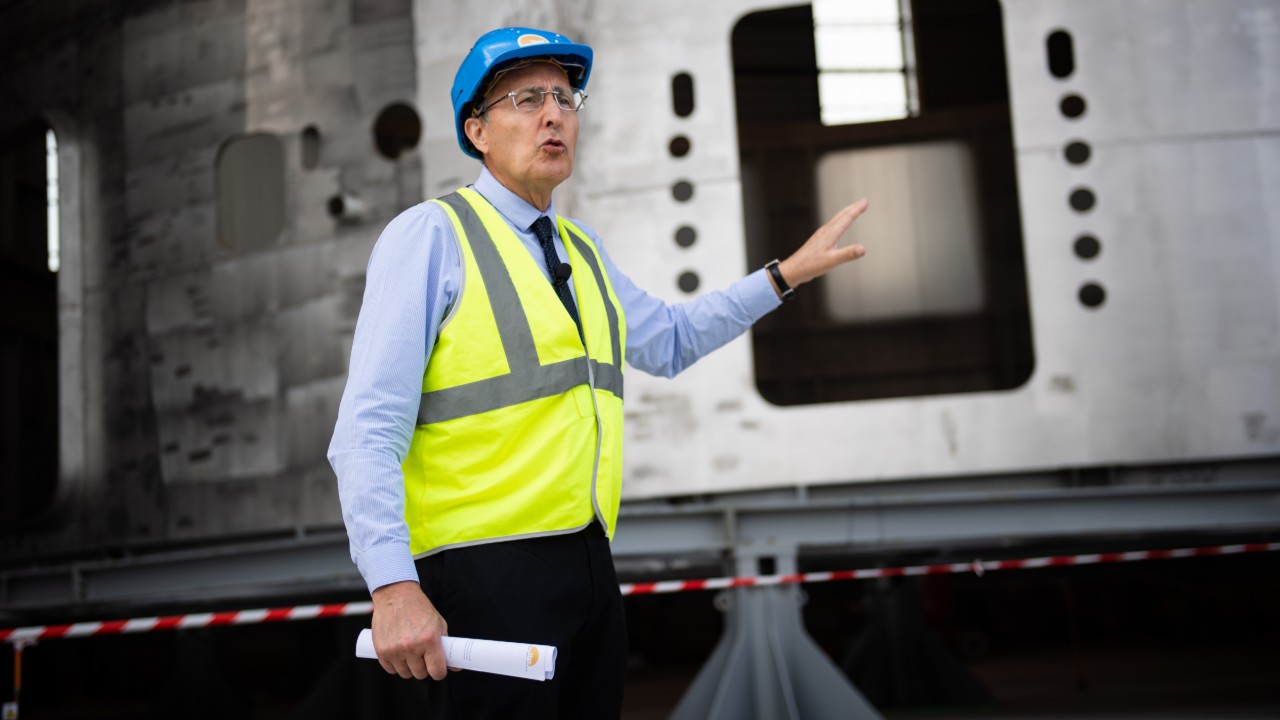 "It is because of hydrogen fusion that we are all alive today. Without fusion taking place in the Sun, we would have no light or warmth and there would be no light on Earth" - Bernard Bigot, ITER director-general.

Visibly excited as his dream neared reality, the septuagenarian leader of the International Thermonuclear Experimental Reactor (ITER) project today invited the world to celebrate an important milestone in a scientific quest that has lasted his entire lifetime.

Bernard Bigot was speaking at the formal launch of the "tokamak" assembly that aims to recreate the source of energy that powers everything in our galaxy; not so much harnessing solar power as creating it. That energy is nuclear fusion.

"The concept of recreating that incredible energy source here on Earth is a typical human approach – to take the best of nature," enthused Bigot. "We try to understand nature and then we try, with the best of human imagination, to recreate what nature shows us."

How nuclear power works (or doesn't)

There are two types of nuclear power: fission and fusion. In fission, the nucleus of an atom splits into two or more smaller nuclei; in fusion, two or more nuclei combine. Each reaction releases energy, which can be harnessed for destruction – the bombs dropped on Japan in 1945 were fission, but fusion was behind the second-generation "H-bomb" and can generate vast amounts of power.

Or so goes the theory. Eager scientists have pursued the harnessing of nuclear fusion's power-generating capacity for almost three-quarters of a century –the UK Atomic Energy Authority patented a fusion reactor in 1946 – but without reliable success. There are several theoretical methods to attain fusion, but the one most exciting the modern scientific community is thermonuclear fusion. 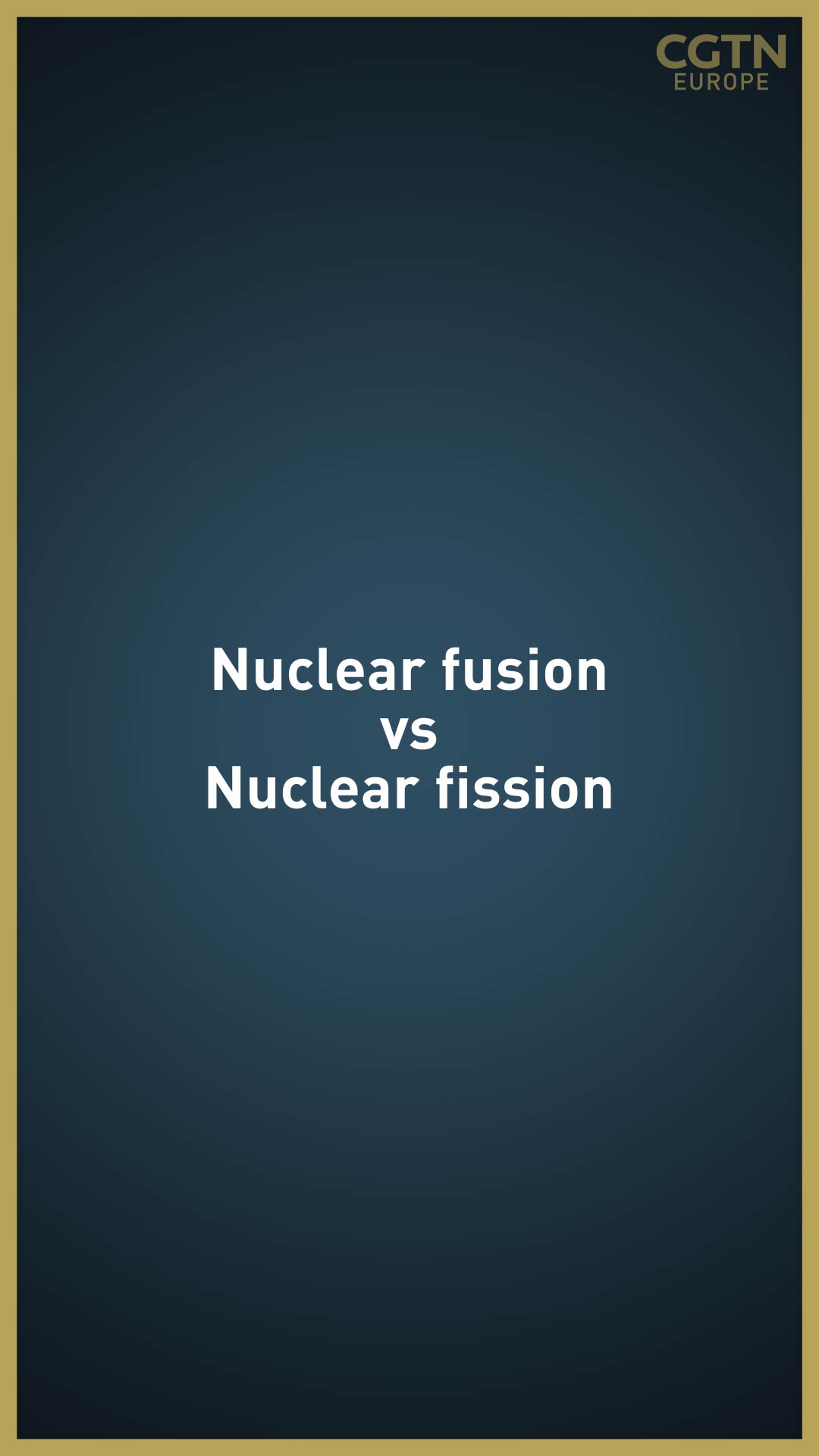 "Thermo" here simply means heat, because that method relies on achieving fusion via extremely high temperatures. That’s what happens in the Sun's core, where hydrogen atoms fuse to produce helium and energy. But forcing two nuclei together is difficult because they're both positively charged, so they strongly repel one another.

Overcoming that innate repulsion happens in the Sun's core because it is under immense pressure of gravity as well as heat – around 15 million degrees Celsius and 265 billion bar of pressure. On Earth, where atmospheric pressure is roughly 1 bar, the interior of the ITER fusion reactor will need to reach 150 million degrees Celsius – 10 times hotter than the Sun's core.

That's the scale of the task scientists are tackling – as well as keeping the whole thing under tight control. Humankind has already witnessed the power of thermonuclear bombs, which produce effectively an uncontrolled release of fusion energy. Harnessing, rather than unleashing, that inherent power will require self-sustaining, controlled "break-even" fusion.

What are the pros and cons of nuclear fusion?

In 2019, National Geographic described nuclear fusion as the "holy grail for the future of nuclear power." Not only would it produce more energy more safely, it would also produce far less harmful radioactive waste than fission, from which weapons-grade material in spent fuel rods taking millions of years to decay requires extremely careful and expensive storage. (Furthermore, most fusion reactors emit less radiation than the background emissions in the natural world.)

At the other end of the process, fusion requires much less fuel than fission and the fuel is much easier to obtain. Fission requires uranium, a rare substance that must be mined and enriched; fusion requires deuterium, readily extractable from seawater, and tritium – which can be made in the reactor itself from lithium.

A cutaway diagram of how the tokamak will look when it is in place. /ITER

A cutaway diagram of how the tokamak will look when it is in place. /ITER

Lithium's increased usage over the past few years to produce raw material for electric batteries has raised concerns about the effects of large-scale mining. That said, the quantities of lithium required by nuclear fusion power stations would be relatively small and would of course lead to the production of more energy.

And unlike fossil-fuel power generators, fusion reactors don’t emit toxins such as carbon dioxide or other greenhouse gases. The main byproduct is helium; the inert, non-toxic gas has several uses in industry, which has suffered several shortages in recent years.

One huge worry with nuclear fission is the capacity for a meltdown, as at Chernobyl or Fukushima. However, that type of uncontrolled chain reaction simply doesn’t happen with nuclear fusion. "It is absolutely impossible for a Fukushima-type accident to happen at ITER," the official documentation insists. "The reaction relies on a continuous input of fuel; if there is any perturbation in this process, the reaction ceases immediately."

The disadvantage of nuclear fusion is obvious: it's horrendously difficult to achieve. Nuclear fission power plants have been online since the 1950s, whereas fusion is still to be achieved at any great scale. Indeed, its commercial usage may not happen until almost a century after its dirtier, risker counterpart.

Is it really going to happen?

In October 2019, UK Prime Minister Boris Johnson enthused that scientists "are on the verge of creating commercially viable miniature fusion reactors for sale around the world." He soon admitted he may have overstated the imminence – "I know they have been on the verge for some time… It is a pretty spacious kind of verge… we are on the verge of the verge."

Cynics would say fusion has been on the verge of the verge for decades, not helped by occasional claims of success, which have subsequently been debunked. Even ITER isn't making brash promises beyond an attempt to produce plasma by 2025: its official site says ITER "will contribute to the design of the next-generation machine – DEMO – that will bring fusion research to the threshold of a prototype fusion reactor."

I'm convinced that not only is fusion important: it's also going to happen. When ITER works – and I say when, not if – it will be a step change
-  Ian Chapman, CEO, UK Atomic Energy Authority

Even so, there is certainly confidence in the atomic industry – not least from Ian Chapman, CEO of the UK Atomic Energy Authority. "I came to fusion because I passionately believe that it is needed – that it can change the world," he said.

"I'm convinced that not only is fusion important: it's going to happen. When ITER works – and I say when, not if – it will be a step change for fusion and you will see massive investment come into the field.

"What we are doing is fundamentally pushing the barriers of what's known in the technology world. And of course you reach hurdles and you have to overcome them, which we do all the time – and ITER will happen, I am completely convinced of it."

What are the potential applications of nuclear fusion?

Although nuclear power is not officially renewable energy because it relies on the mining of finite materials, fusion releases four million times more energy than a chemical reaction like burning fossil fuels, and four times as much as fission.

According to ITER, "Fusion has the potential to provide the kind of baseload energy needed to provide electricity to our cities and our industries" – and its primary application is likely to be supplying national grids with low-cost, low-waste electricity.

The World Economic Forum has calculated that a gallon of seawater could produce as much energy as 300 gallons of petrol. However, the likelihood of your car whizzing along with a fusion reactor under the hood seems very distant at the moment. 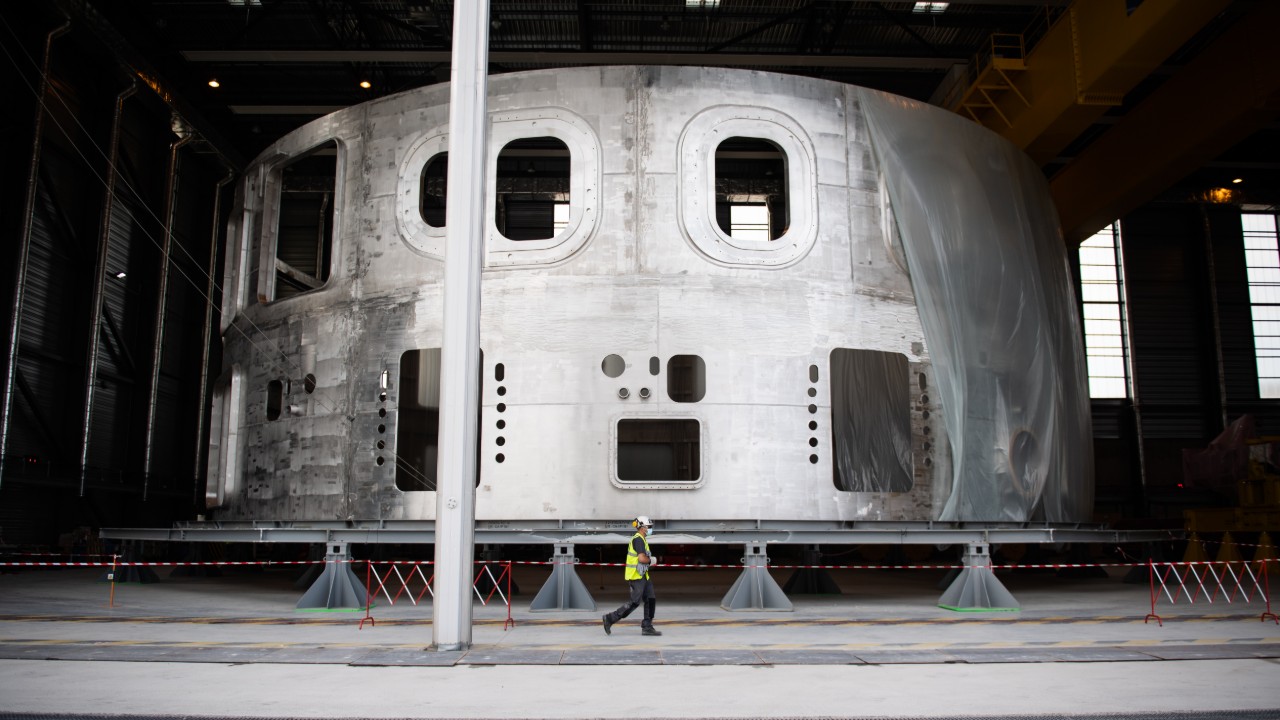 A technician walks past the lower cyclinder of the cryostat, part of the tokamak at the International Thermonuclear Experimental Reactor (ITER) in Provence, France. /Clement Mahoudeau/AFP

A technician walks past the lower cyclinder of the cryostat, part of the tokamak at the International Thermonuclear Experimental Reactor (ITER) in Provence, France. /Clement Mahoudeau/AFP

That said, there are those who are seeking to use fusion for transport. NASA has been investigating the development of small-scale fusion reactors for powering­ deep-space rockets, fueled by the bountiful supply of hydrogen, the universe's most abundant element.

Meanwhile, back down on Earth – or rather the underwater majority of it – the U.S. Navy has filed a patent for a "plasma compression fusion device" using magnetic fields to create "accelerated vibration and/or accelerated spin."

Those applications may be decades off and sound more like science fiction than fact – but scientific research is often propelled forward by the involvement of heavily-funded organizations like the military. Once ITER and its successors pave the way for effective fusion reactors, it's hardly fanciful to suggest that the usual market forces of device miniaturization may follow. You may yet get that nuclear-powered car.

What is the timeline?

Tuesday 28 July marked the official start of machine assembly at ITER, a process which has taken 30 or 40 years so far, depending how you cut it. In 1978, the International Atomic Energy Authority enrolled the USSR, Japan, U.S. and the nascent European Commission into an investigative workshop examining the possibilities of building a 'tokamak' nuclear fusion reactor. 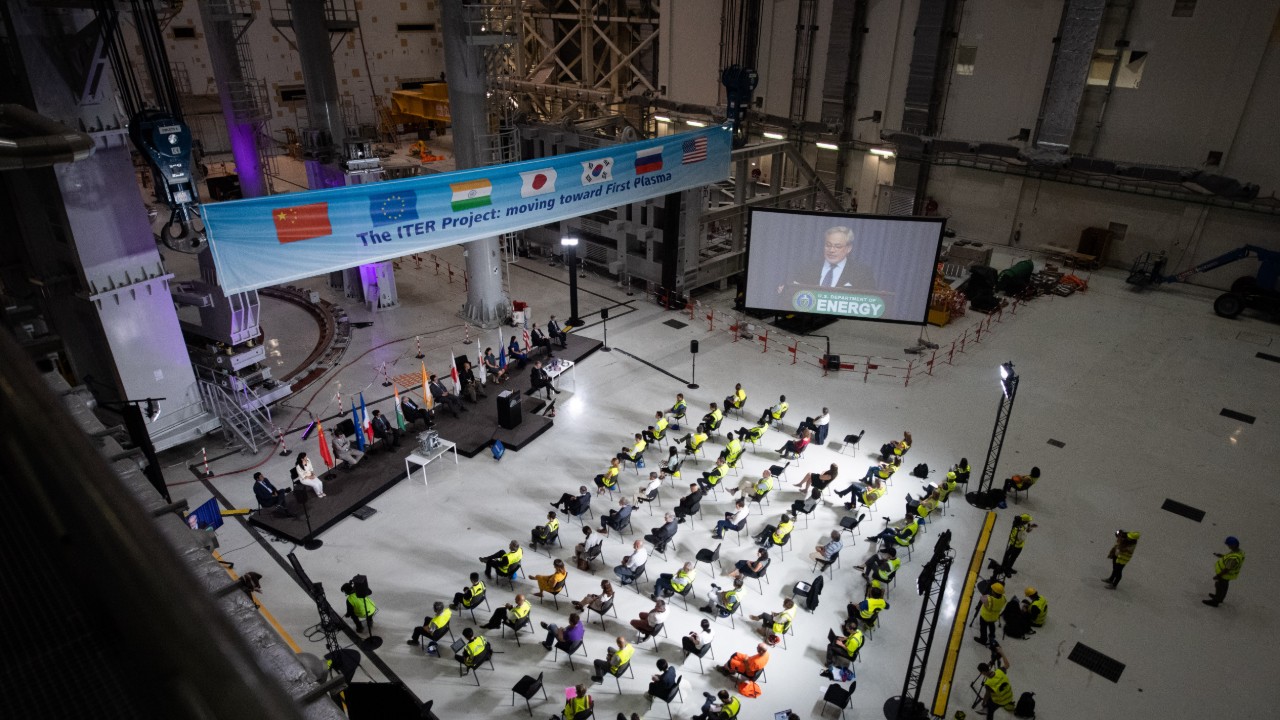 The launch ceremony brought together representatives from global powers backing ITER, including the EU, Japan, India, the U.S. and China. /Clement Mahoudeau/AFP

The launch ceremony brought together representatives from global powers backing ITER, including the EU, Japan, India, the U.S. and China. /Clement Mahoudeau/AFP

At the 1985 Geneva summit, Mikhail Gorbachev suggested to  Ronald Reagan that the countries jointly build the tokamak, and the ITER project began in 1988. In 2006, the participants agreed to build the tokamak in Provence, southern France; site preparation began in 2008 and construction in 2013. As ITER admits ruefully but guardedly, "it certainly took longer to build up the ITER Organization – and establish world-class systems for managing the project – than was originally foreseen."

The next five years will involve the construction of the tokamak. Said to be the most complex machine ever built, it is 30 meters wide and almost as tall with around one million components. ITER has set a target of December 2025 to produce the world's first "burning plasma," in which the energy produced becomes large enough to exceed the external heating – in other words, it has achieved "break-even" condition.

During the decade from 2025 to 2035 ITER will gradually ramp up until it is fully operative and fusing deuterium and tritium. By that time, the next generation of reactors will be being built, which are expected to be operational by the 2040s. If that's achieved, it will be the climax of a century or so of hard work from scientists and leaders attempting not so much to reach for the stars as to recreate the power of one.