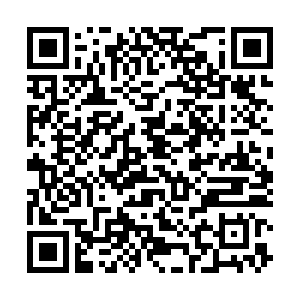 • Leading scientists have warned that the UK will be living with the coronavirus for many years to come and even once a vaccine is available it is unlikely to eliminate it for good. "Things will not be done by Christmas," said one member of the government's advisory group of scientists.

• Airlines are calling for a joint virus testing program in the U.S. and Europe so travel can resume. British Airways and United Airlines are two of the companies that sent a letter to U.S. vice president Mike Pence and Ylva Johansson, the European commissioner for home affairs. "We believe it is critical to find a way to reopen air services between the US and Europe,” the letter said. The EU doesn't currently allow visits from U.S. residents and the UK requires people arriving from the U.S. to spend 14 days in self-imposed quarantine.

• An Austrian woman goes on trial today for ignoring quarantine rules. The woman from Klagenfurt has been accused of going to the post office with COVID-19 and not wearing a mask.

• Ireland's government has relaxed quarantine rules on travel to and from 15 European countries but says it's still the safest decision not to travel. The "green list" includes Malta, Finland, Norway, Italy and Slovakia. The UK, France and Spain are still on the quarantine list.

• France's public health authority says it's still too early to give a precise coronavirus death toll but says 29,186 deaths in hospital and care homes were directly linked to the virus between March and May. The mortality rate at the end of March was 60 percent higher than normal.

• The mayor of A Coruña in the Galicia region of northwest Spain has criticized second division football club Fuenlabrada for traveling to the city for a crunch match despite a COVID-19 outbreak among the team. The club says everyone who took the plane had taken a negative test but Monday's match was called off and will be replayed on 30 July.

• In Scotland, beauticians, nail salons and tattoo parlors can reopen from today.

• Ukraine has canceled visa requirements for Australia, New Zealand and some Arab states from 1 August, according to a decree signed by President Volodymyr Zelenskiy published on his website.

• A new study by the University of Nebraska suggests COVID-19 can spread through normal speaking and breathing and is able to travel further than two meters, according to a report by AFP. The findings have not yet been peer-reviewed.

• Belgian officials urge action to prevent a "virus avalanche" after a surge in cases following a relaxation of measures in the country.

• Spanish tourism minister, Reyes Maroto, says a recent rise in coronavirus cases in Catalonia is coming under control and there are hopes that there will be no need for France to close the border between the two countries.

• Switzerland has expanded its COVID-19 watchlist to 42 territories, and new arrivals from the stated countries must enter a 10-day quarantine.

• Romania reached a record daily high of 1,030 new cases. The government has extended a state of alert, which has been in place since May, until the middle of August.

• German firm BioNTech says the U.S. government has agreed to pay almost $2 billion for 100 million doses of a potential coronavirus vaccine. BioNTech is developing the drug with U.S. drugs company Pfizer and said in a statement that American people would receive the future vaccine "for free" in line with the Trump administration's commitment for "free access for COVID-19 vaccines."

• Worrying trends of coronavirus infections are emerging in southern Europe and in the Balkan region, said Michael Ryan, head of the World Health Organization's emergencies program. "We're not out of the woods just yet in the European environment. It requires sustained vigilance."

• Globally, 14.9 million people have been diagnosed with the coronavirus, nearly 8.5 million have recovered and nearly 616,000 have died, according to Johns Hopkins University. 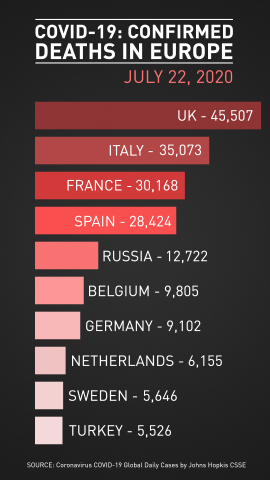 Some countries in the Central and Eastern and Southeast European (CESEE) region are reporting growing numbers of coronavirus infection, according to the latest data.

The number of coronavirus-infected people in the CESEE had reached 193,297 on Sunday evening, up 19,831 week-on-week.

French President Emmanuel Macron says face masks will be provided for the most vulnerable families in the country now that nose-and-mouth coverings are also compulsory in indoor public spaces.

Macron, ruled out making face masks free to everyone in France, saying the "state cannot pay for all masks all the time."

The leader of the greater Paris region says washable masks will be provided to 500,000 high school children in time for the start of the new academic year in five weeks.

Separately, the coronavirus pandemic is estimated to have killed between 25,000 and 30,000 people from the beginning of March to the end of May, according to a new report from Public Health France, which says the Paris region has been the most affected. Travelers have their temperatures checked at the security gate at Gare de Lyon train station in Paris. /Francois Guillot/ AFP

Travelers have their temperatures checked at the security gate at Gare de Lyon train station in Paris. /Francois Guillot/ AFP

German drug firm Evotec Biologics has been awarded an $18 million contract by the U.S. government to develop treatments for COVID-19.

The company's Seattle subsidiary has been asked to provide monoclonal antibodies used to treat the novel coronavirus. Such antibodies are made by cloning identical immune cells from a parent.

The company's share price rose by nearly 5 percent at the start of trading on Wednesday.

Meanwhile, European stock futures have declined after an initial bounce in the wake of the recovery fund deal, amid concerns about the worsening COVID-19 crisis in the U.S.

Belgium's government is considering making a U-turn on easing coronavirus restrictions after a spike in the number of new cases.

Officials have decided to hit the brakes on the next phase of easing, which was meant to kick in on 1 August. That phase would have allowed for larger groups to gather indoors and outside. Instead, the country's health minister said face masks in all public spaces may be made mandatory as of Thursday.

Local measures – including lockdowns – could also be reimposed for places that have experienced high outbreaks. The size of "social bubbles" could also be reduced from 15 to 10.

The country's National Security Council meets on Thursday to discuss the next steps. The country has reported a 79 percent increase in average daily COVID-19 infections in the past week.