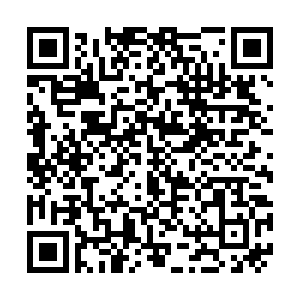 It may have taken months of discussions, disagreements and squabbles, and an almost five-day-long summit, but European Union (EU) leaders have finally agreed on a "historic" stimulus plan to help pull their battered economies out of the coronavirus crisis.

The deal, which was reached as the summit closed in the very early hours of Tuesday morning, making it the EU's second-ever longest summit, was described by summit chairman, Charles Michel, as a "pivotal moment" for Europe.

It paves the way for the European Commission, the EU's executive body, to raise billions of euros on capital markets on behalf of all 27 states, an unprecedented act of solidarity in almost seven decades of European integration.

But with all the contention surrounding the main aspects of the deal: its size, the compromises made to reach it, how it will be allocated and which countries are really set to benefit the most, here are the key questions answered. 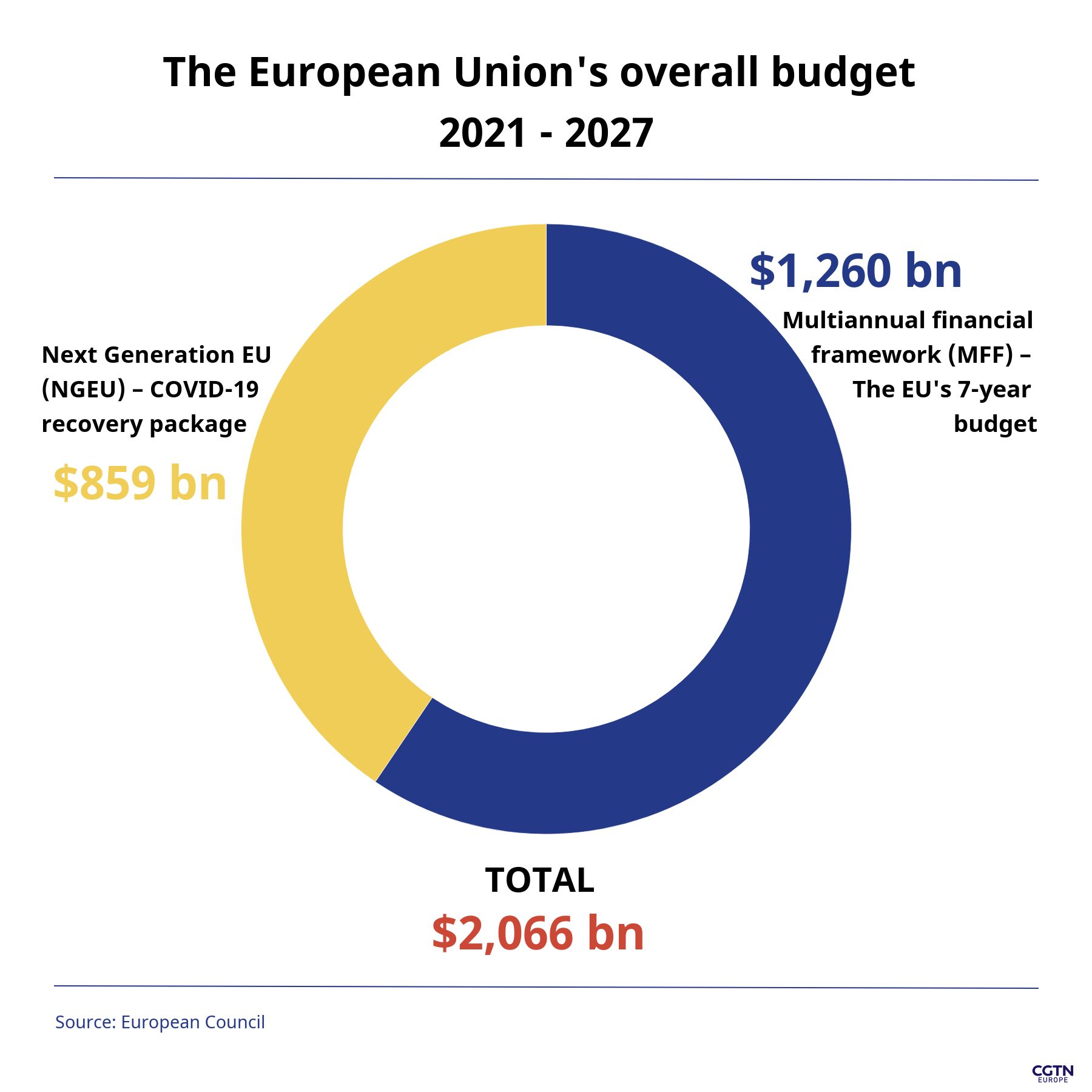 How big is it?

Massive amounts of money have been thrown at this financial package to recover from COVID-19: a 750 billion euro ($859 billion) recovery fund, to be precise, justified by the continent's deepest recession since World War Two after the coronavirus outbreak shut down economies. 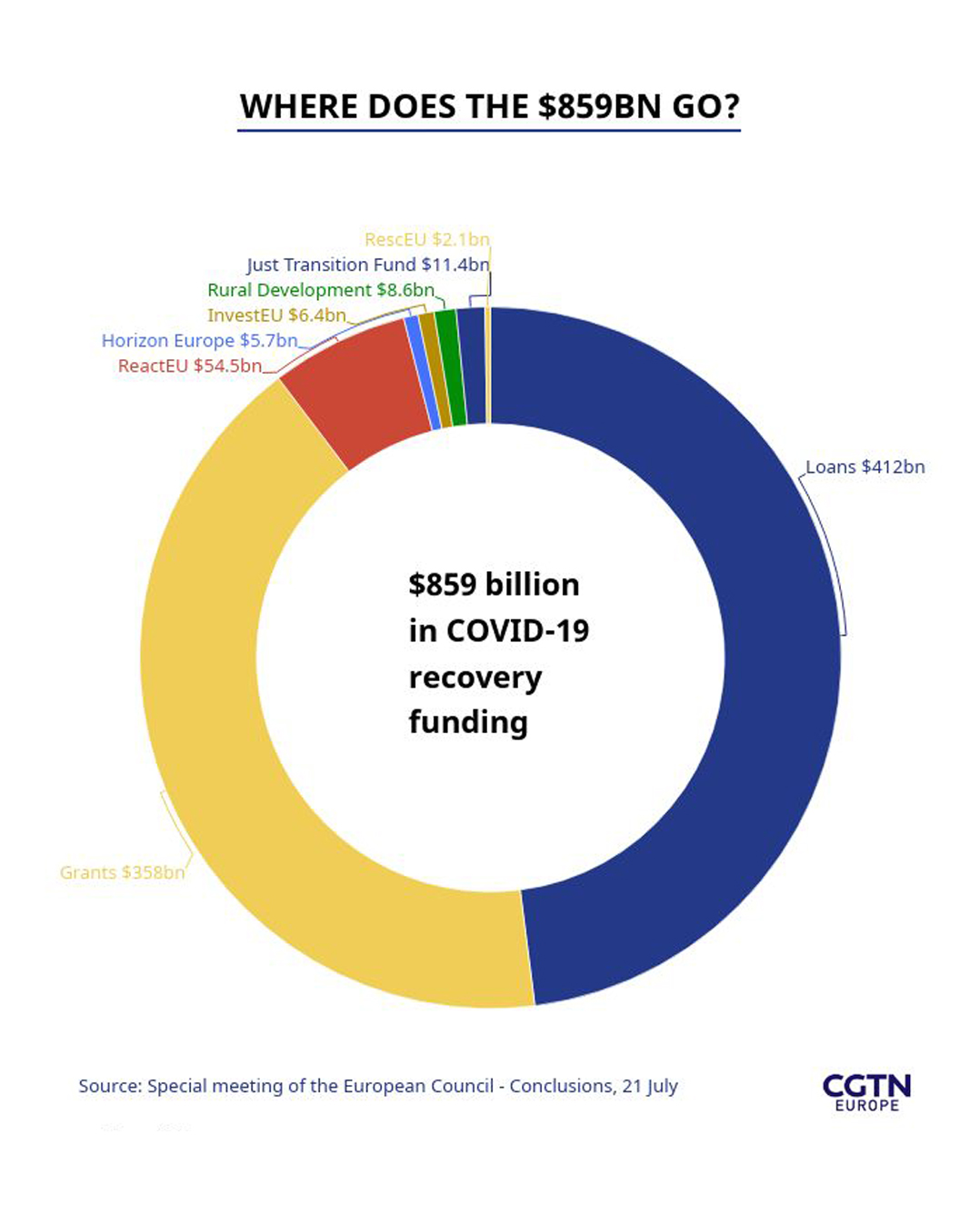 To fund the huge $859 billion coronavirus recovery plan, the European commission will borrow on financial markets, on behalf of all 27 states, using its triple-A debt rating, disbursing 390 billion euros ($446 bn) in grants – less than the originally targeted 500 billion euros ($572 bn).  Another 360 billion euros ($412 bn) will be available in cheap loans.

The move is seen as an unprecedented act of solidarity in almost seven decades of European integration. So unprecedented, in fact, that Germany's finance minister, Olaf Scholz, hailed it as Europe's 'Hamilton' moment in reference to Alexander Hamilton's decision to federalize the debts of U.S. states in 1790.

But given the difficulties and the compromises made in reaching this EU stimulus package deal as well as the in-fighting amongst member states, commentators say talk of Europe's 'Hamilton' moment is overblown and does not set the EU on the path towards a U.S.-style fiscal union – although some may see it as a first step.

There is also no certainty about how the EU will repay its debts. To pay back investors, EU member states have agreed to create new common taxes, and the commission has been asked to propose further wider green taxes, but agreements on this will not be easy. 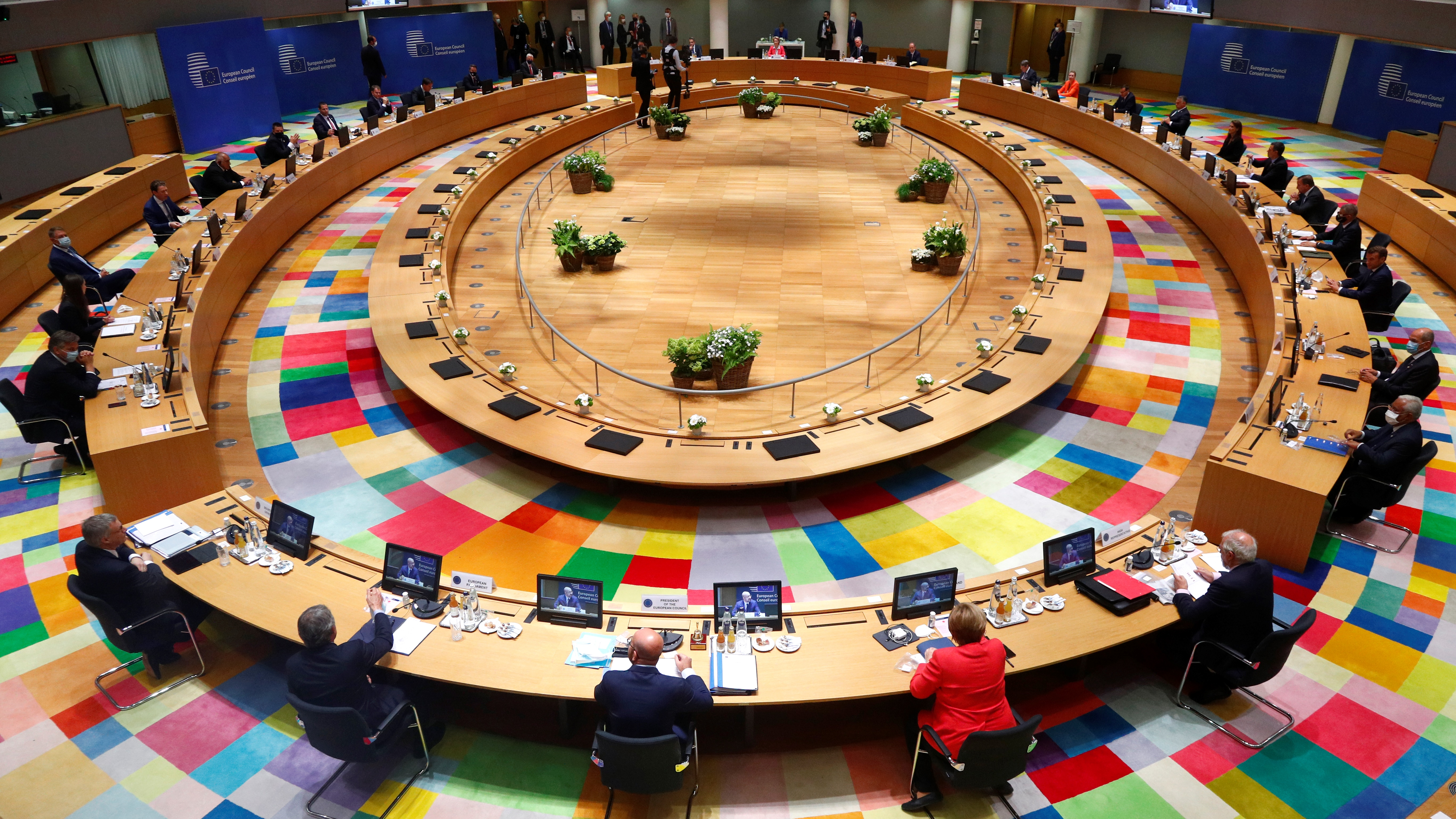 How green is it?

While strong in symbolism, the deal came at the cost of cuts in top-up funding for EU programs, including most significantly, in climate-friendly funds.

The deal allocates 30 percent of the entire package for climate protection and says all spending must contribute to EU emissions-cutting goal of net zero by 2050. This could see nearly 550 billion euros ($629 bn) spent on climate over 2021-27 – a massive sum, but far below the 2.4 trillion euros ($2.7 trillion) in investment researchers say is needed to meet EU climate goals.

However, climate advocates say this may not be enough, as the package also comes with cuts to key climate programmes, including InvestEU and Horizon Europe, and insufficient rules to ensure cash does not support polluting investments.

A "just transition fund" to help poorer countries reduce their carbon emissions was cut, receiving 17.5 billion euros ($20 bn) – less than half of what was previously proposed. The conditions for accessing it were also watered down, giving coal-producing Poland a partial victory of being able to access half the money available without signing the EU pledge of net-zero emissions by 2050, much to the dismay of climate campaigners. 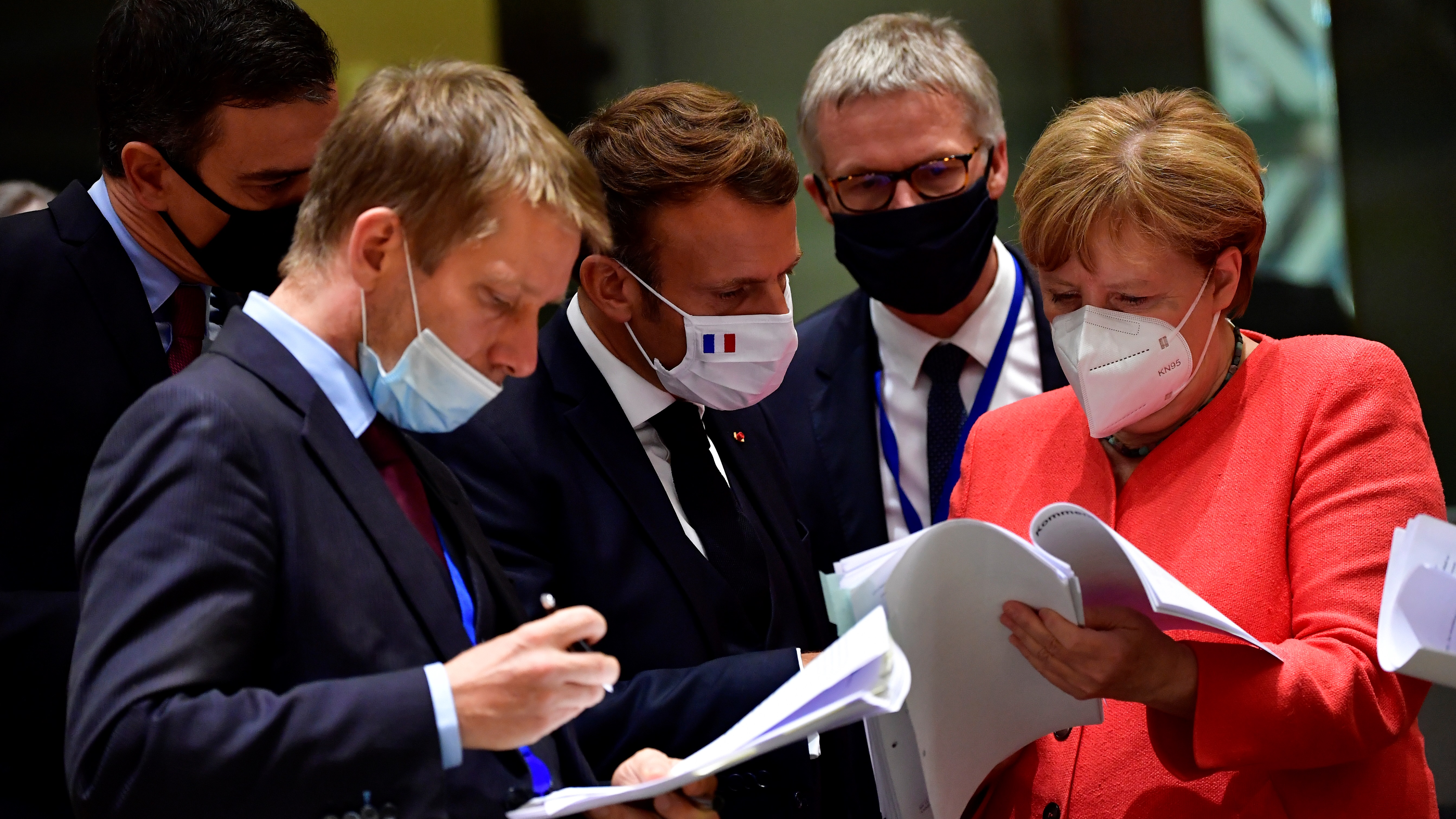 A push for the EU's initial deal was spearheaded by France and Germany, but rejected by the so-called "frugal" states. /John Thys/POOL/AFP

A push for the EU's initial deal was spearheaded by France and Germany, but rejected by the so-called "frugal" states. /John Thys/POOL/AFP

Who pays the most, who gets the most?

It's no secret that this stimulus package and a push for the deal which was spearheaded by France and Germany, was a cause of division among member states.

But to reach an agreement, compromises were made by everyone. France, Germany, Spain and Italy were forced to accept less generous recovery grants than they had wanted because of opposition from the richer northern countries. But these "frugal" states, as they're dubbed, (Austria, Denmark, the Netherlands and Sweden), had made a concession by agreeing to grants being handed out at all.

The frugals did, however, secure larger rebates from the next EU budget – meaning a discount on their contributions to the EU budget. Austria's annual reduction will be doubled to 565 million euros ($646 million) a year compared with previous proposals, while the Netherlands' rebate will jump from 1.57 billion euros ($1.8 bn) to 1.92 billion euros ($2.2 bn). Denmark and Sweden also received increased discounts.

In terms of how much countries will receive, Italy emerges as one of the biggest beneficiaries, based on the fact it was one of the worst hit by the pandemic, with Italy's prime minister announcing it would receive 209 billion euros ($239 bn) – 28 percent of the fund – of which 81 billion euros ($93 bn) would be in grants and 127 billion euros ($145 bn) in repayable loans.

As for Spain, which has also been badly hit, it will also receive one of the highest amounts. It will receive 140 billion euros, just over half of which ($83.2 bn) will be in grants while the remainder will be in loans to be repaid.

For many commentators, however, Hungary and Poland arguably emerge as the biggest winners, not in terms of money perhaps, but in allowances. These governments, which are both being investigated by the EU for undermining an  independent judiciary, successfully fought to ensure EU funds were not linked to the rule of law.

But Germany's Angela Merkel, along with other leaders, worked on a compromise plan that would allow a weighted majority of EU governments to block payments to a country over rule-of-law violations.

The recovery plan now faces a potentially difficult passage through the European Parliament and it must be ratified by all EU states. The first money will likely not reach the real economy before the middle of next year, economists say.