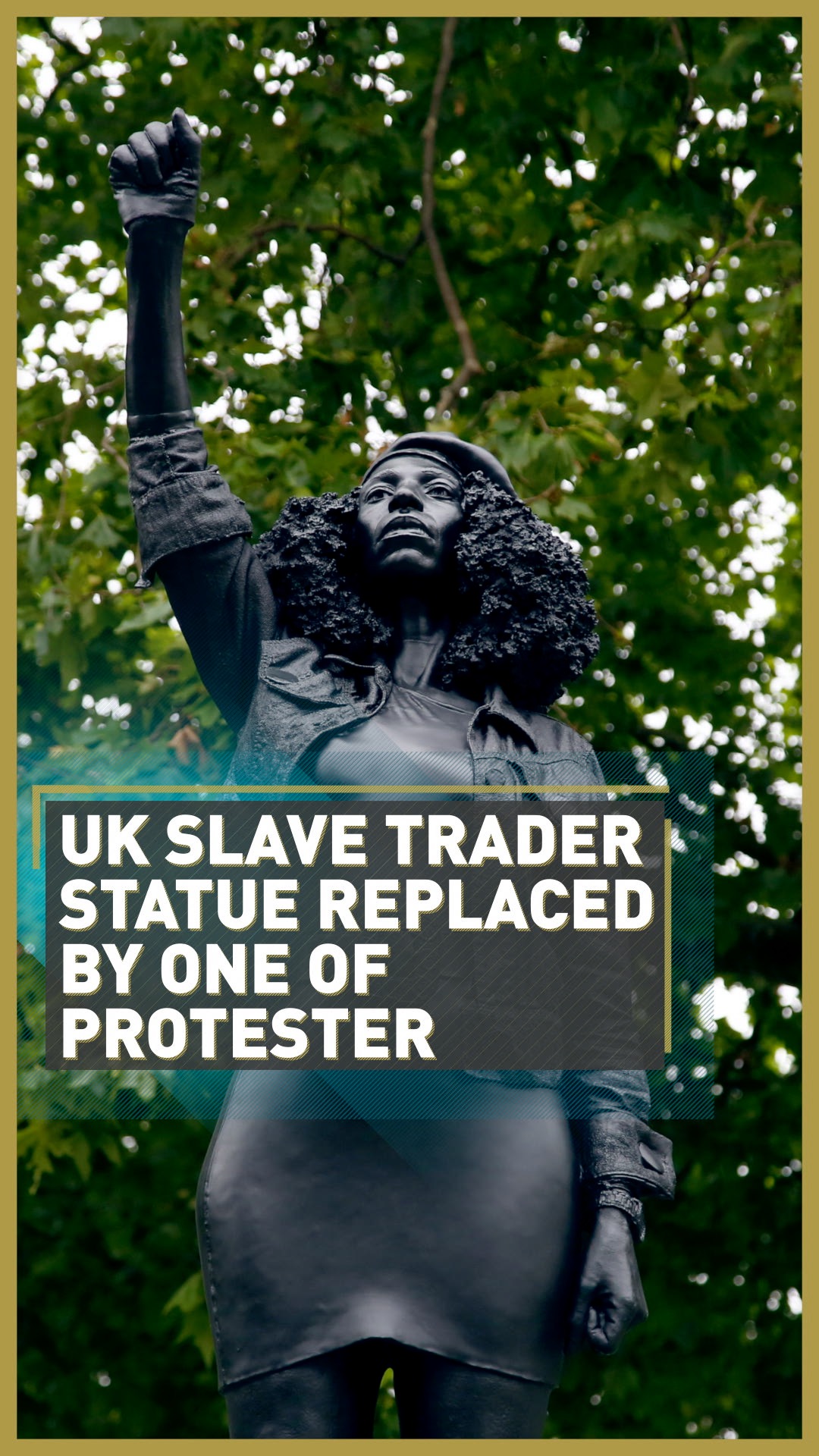 The statue of British slave trader Edward Colston which was famously toppled during anti-racism demonstrations in the city of Bristol, has been replaced by a sculpture of a Black Lives Matter (BLM) protester with her fist in the air – a symbol of the movement.

Well-known British sculptor and artist, Marc Quinn, molded the likeness of Jen Reid, a protester who was photographed standing on the plinth where Colston's statue stood before demonstrators pulled it down and dumped it in the harbor on 7 June.

The incident took place during anti-racism protests, which were happening in the UK and around the world to condemn the police killing of unarmed black man George Floyd in the U.S. in May.

Floyd died after a white police officer knelt on his neck for almost nine minutes as he was pinned to the floor. Global protests were ignited as Black Lives Matter demonstrators took to the streets to voice their anger against racism and police brutality.

The movement also brought into focus the issue of statues that appear across Europe, of historical figures tied to the slave trade, colonialism or violence against black people. Statues in several European countries were defaced or removed during the protests.

Colston's statue had been the subject of controversy in recent years, with many saying he shouldn't be publicly recognized by the town and even signing a petition to have it removed.

The 17th-century trader made a fortune transporting enslaved Africans across the Atlantic to the Americas. His money funded schools and charities in Bristol,195 kilometers) southwest of London. Colston also has several landmarks named after him in Bristol. The plinth in Bristol stood empty after protesters took down the statue of slave trader Edward Colston. /Kirsty Wigglesworth/AP Photo

The plinth in Bristol stood empty after protesters took down the statue of slave trader Edward Colston. /Kirsty Wigglesworth/AP Photo

Quinn said he understood why protesters took down the figure of Colston, saying it was the "statue of a slaver that's been there as a kind of insult in bronze for hundreds of years."

He was inspired to make the new sculpture after seeing a photograph of Reid on the empty plinth during the protests. He said Reid had "created the sculpture when she stood on the plinth and raised her arm in the air. Now we're crystallizing it."

The statue, titled A Surge of Power (Jen Reid) was erected before dawn on Wednesday 15 July without approval from city officials.

But Reid hopes it stays where it is to keep the conversations about race going. "I'd like the council to keep it here, because of obviously what it represents and who was there prior," Reid said. "I think the most important thing is that something is up there replacing Edward Colston. And for people to discuss, educate, learn and just keep talking about, you know, BLM," she added. 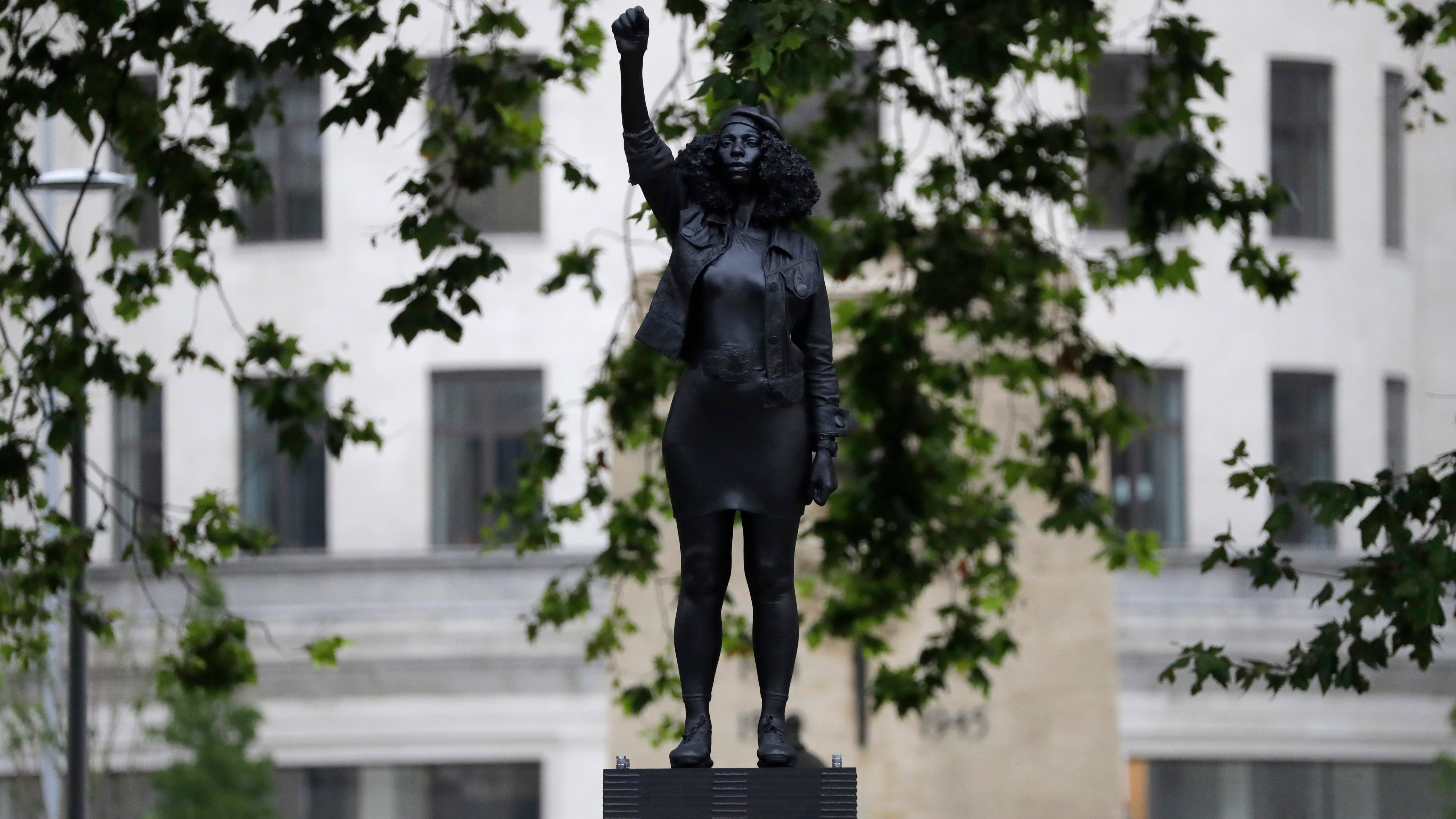 The newly erected statue of protester Jen Reid was put up without approval from city officials, but the artist and the subject hope it remains. /Matt Dunham/AP Photo

The newly erected statue of protester Jen Reid was put up without approval from city officials, but the artist and the subject hope it remains. /Matt Dunham/AP Photo

Bristol's residents who had woken up to the newly erected statue that represented the BLM movement also voiced their approval.

Jess Spedding, a nurse, said: "I just love that the people of Bristol have got behind this movement so strongly and I'm just so impressed with the global impact this kind of statement will have."

While local resident Tess McNab was one of many people who echoed Reid's hopes that the statue would stay.

"If you are going to be true to the feelings of Bristol you have to keep it up," McNab said.

City authorities fished the Colston statue out of the harbor and say it will be placed in a museum, along with placards from the Black Lives Matter demonstration.