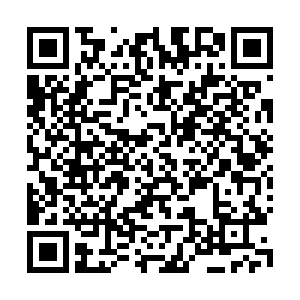 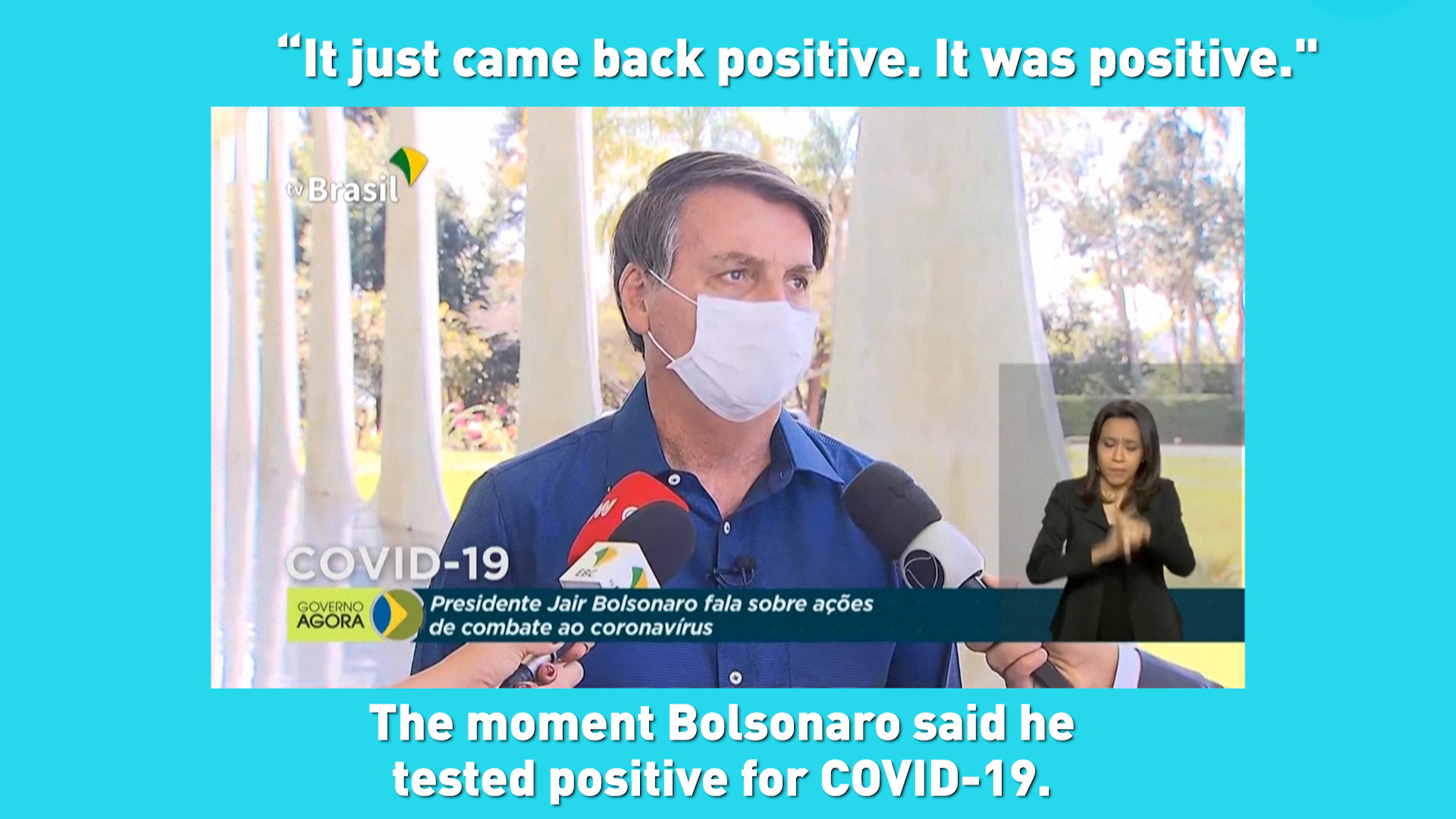 Brazil's president, Jair Bolsonaro, has tested positive for COVID-19, adding in a television interview that he was in good health despite running a fever.

The right-wing populist, who has played down the severity of the virus, which he has called a "little flu," took the test on Monday after developing symptoms.

In the interview broadcast on state-run TV Brasil, Bolsonaro said he began feeling ill on Sunday and has been taking hydroxychloroquine, an anti-malarial drug with unproven effectiveness against COVID-19.

"There's no reason for fear. That's life," the president said, wearing a mask, outside his official residence. "Life goes on. I thank God for my life and the role I've been given to decide the future of this great nation that is called Brazil."

Brazil has the world's second-largest outbreak behind the U.S., with more than 1.6 million confirmed cases and 65,000 COVID-19 deaths.

Bolsonaro had repeatedly defied local guidelines to wear a mask in public, even after a judge ordered him to do so in late June.

Since then, he has continued to attend social events and political rallies, often not wearing a mask. He has also opposed lockdowns and criticized social distancing rules supported by the World Health Organization.

Bolsonaro joins a short list of heads of government to become infected with the coronavirus, including UK Prime Minister Boris Johnson and Honduran President Juan Orlando Hernandez, both of whom were treated in hospital.

Bolsonaro's positive test looks set to spark a frantic period of contact tracing and further tests for those who met the politician in recent days, including Paulo Guedes, the economy minister, Luiz Carlos Trabuco, the chairman of Brazilian bank Bradesco and Francisco Gomes Neto, the CEO of plane maker Embraer.

Over the weekend, Bolsonaro was also in close contact with the U.S. ambassador to Brazil, Todd Chapman, during 4 July celebrations. Pictures showed neither wearing a mask.

The U.S. embassy in Brasilia said the ambassador had lunch with Bolsonaro, five ministers and the president's son, Eduardo Bolsonaro, a congressman. The ambassador had no symptoms, but would undergo testing and is "taking precautions," the embassy said.

In a news conference, Mike Ryan, executive director of the WHO's health emergencies program, said: "We wish him [Bolsonaro] a full and speedy recovery from this disease."

"The message is that this virus is unpredictable and does not respect race, class or people in power, despite security around any president," Espinal said.

He added: "For Brazil, the infection of its president should reinforce the need to strengthen implementations of social-distancing recommendations and the use of masks to mitigate the spread of coronavirus." 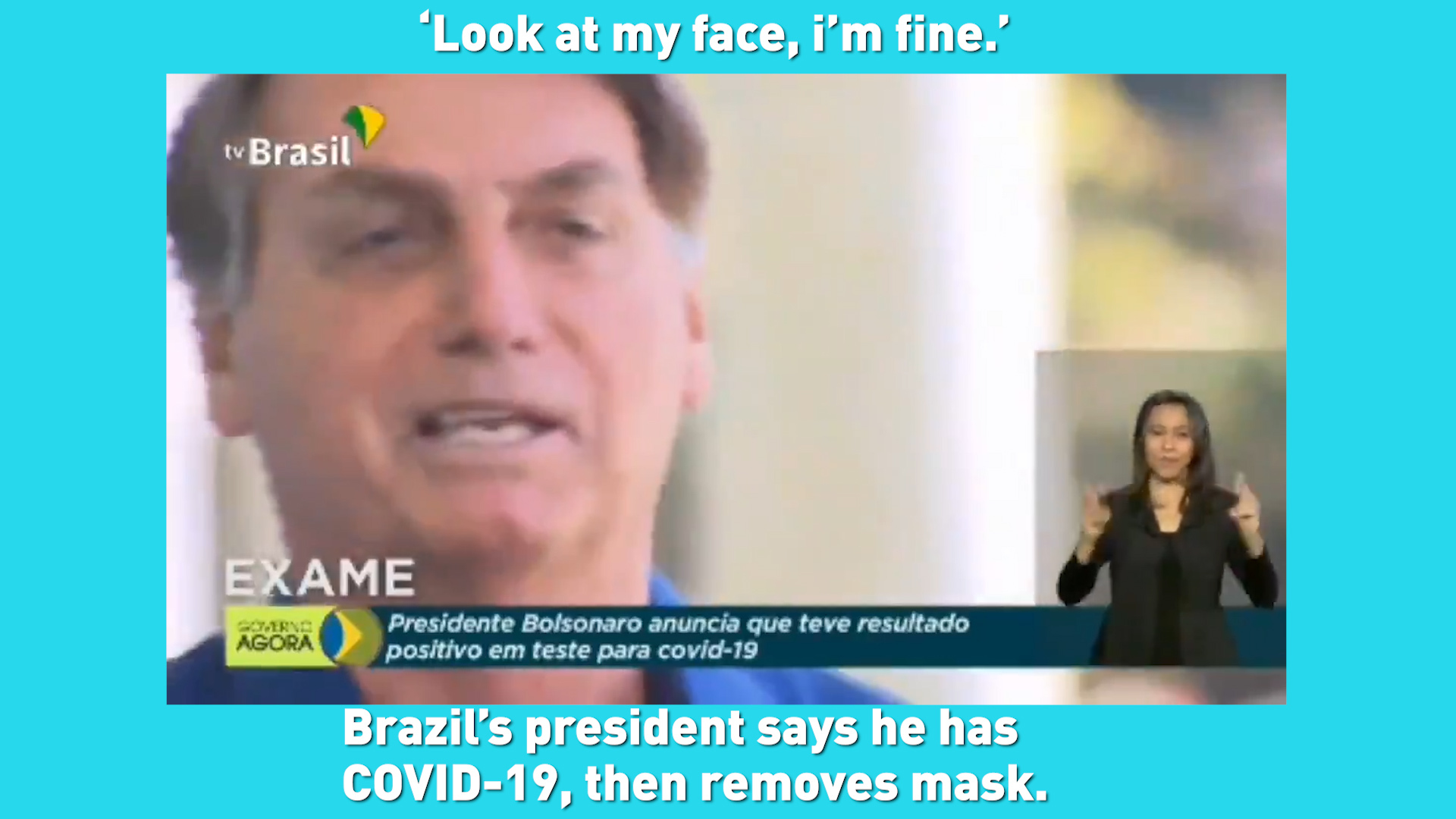