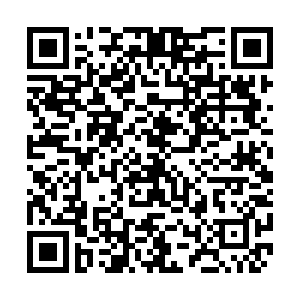 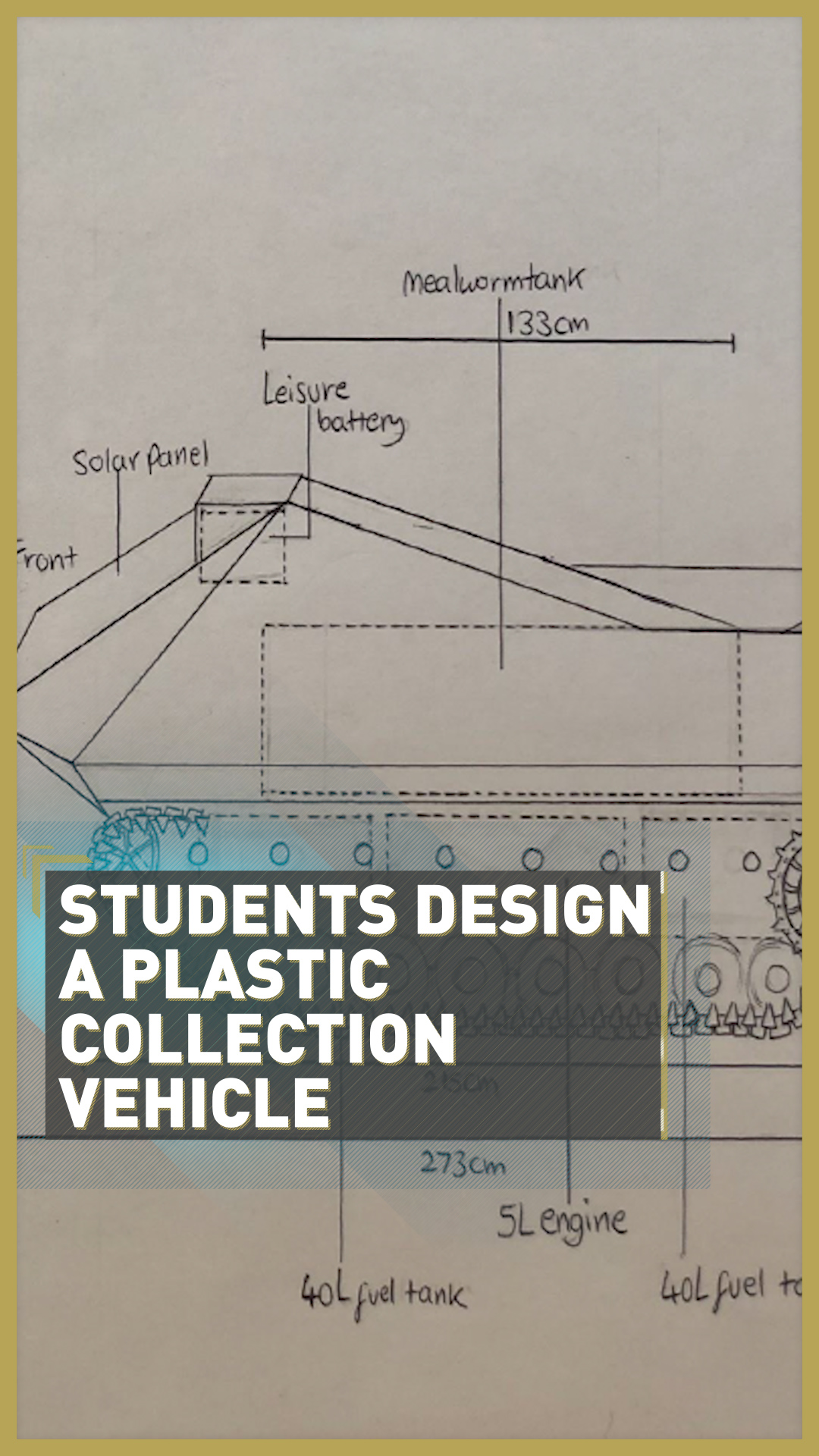 Most of us might not be familiar with things like hydraulic arms, vex models and nanoparticles, but this is all Evie, James and Rae, three students from the Beacon School in Surrey, UK, have been talking about for the past few months. With good reason, too.

"Each year we run a global STEM competition - that's science, technology, engineering, mathematics - and each year we choose a challenge to capture the imagination of young people," explains David Hanson, the BIEA's STEM chairman.

"We believe STEM has a critical role to play in dealing with some of the legacies of the past in terms of the environment and the impact of industry and technology in shaping our future. We want the next generation to be molding that," says David Hanson.

This year's theme, 'SOS: Save Our Shores - STEM (Stop) the Tide of Plastic Pollution,' invited students to find solutions to picking up plastic waste in river banks before it reached the sea.

"We started researching what we wanted to focus on, microplastics - which are pieces of plastic less than 5mm in length. Our research showed us that microplastics made up a huge amount of pollution which hasn't really been focused on very much," says Rae, 16.

"So many of the methods at the moment that work to prevent plastic pollution deal with it once it's already got to the ocean. To us, that's too late, because there's so many indirect detrimental effects, like chemical leaching. If we could stop the plastic getting into the ocean in the first place, it prevents all those knock-on effects, which is why we focused on the muddy waterways and the shores." 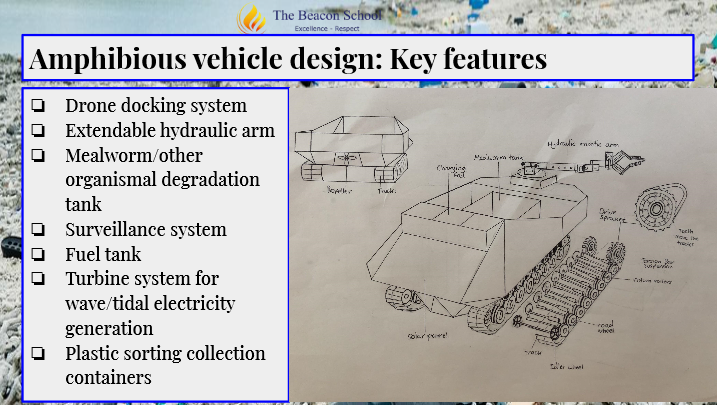 Plastic pollution is an urgent global problem: 350 million tons are produced every year, with an estimated 12.7 million tons ending up in our oceans. Up to 75 percent of marine litter is plastic, which represents not only a threat to marine life - choking sea birds, fish, and turtles - but also to humans and other organisms through the leaching of chemicals and degradation of it into microplastics.

Team Amet spent many weeks making "good use of the 40 minutes free that we get from Zoom, with just five meetings every day of the past week," James says, going over ideas for their amphibious vehicle.

"It uses infrared detection from a drone to detect plastics picked up by a hydraulic arm," explains Evie, the team leader. "The main part of our vehicle that we think makes it unique is the mealworm tank inside, which can biodegrade polystyrene."

The team was inspired by the M1 Abrams tank and the leopard tank to make their waterproof vehicle, which in the spirit of the competition is environmentally sustainable and runs on biofuel and solar energy.

James has even built a vex model of their designed vehicle.

"You've got the wheels, which would be treads because we need better front traction," he explains. "And then you've got the compartments here to store the mealworms. There will be 770 in there. You've also got the arm, which can be used to pick up the plastic - it's hydraulic, extendable and it can swing 360 degrees to pick up the plastic all around.

"There are also solar panels and turbines to power the drone, which will have the infrared detector on it to detect plastic marine life and the different types of plastic especially."

The current methods of cleaning plastic waste from beaches include seabins, manual pick-up, floating barriers and pyrolysis - thermal decomposition of materials at high temperatures. According to Alex Holmes, BIEA Head of STEM, the students' submissions were extremely creative and included tank tracks, machines with spiders' legs and movie-inspired vehicles. 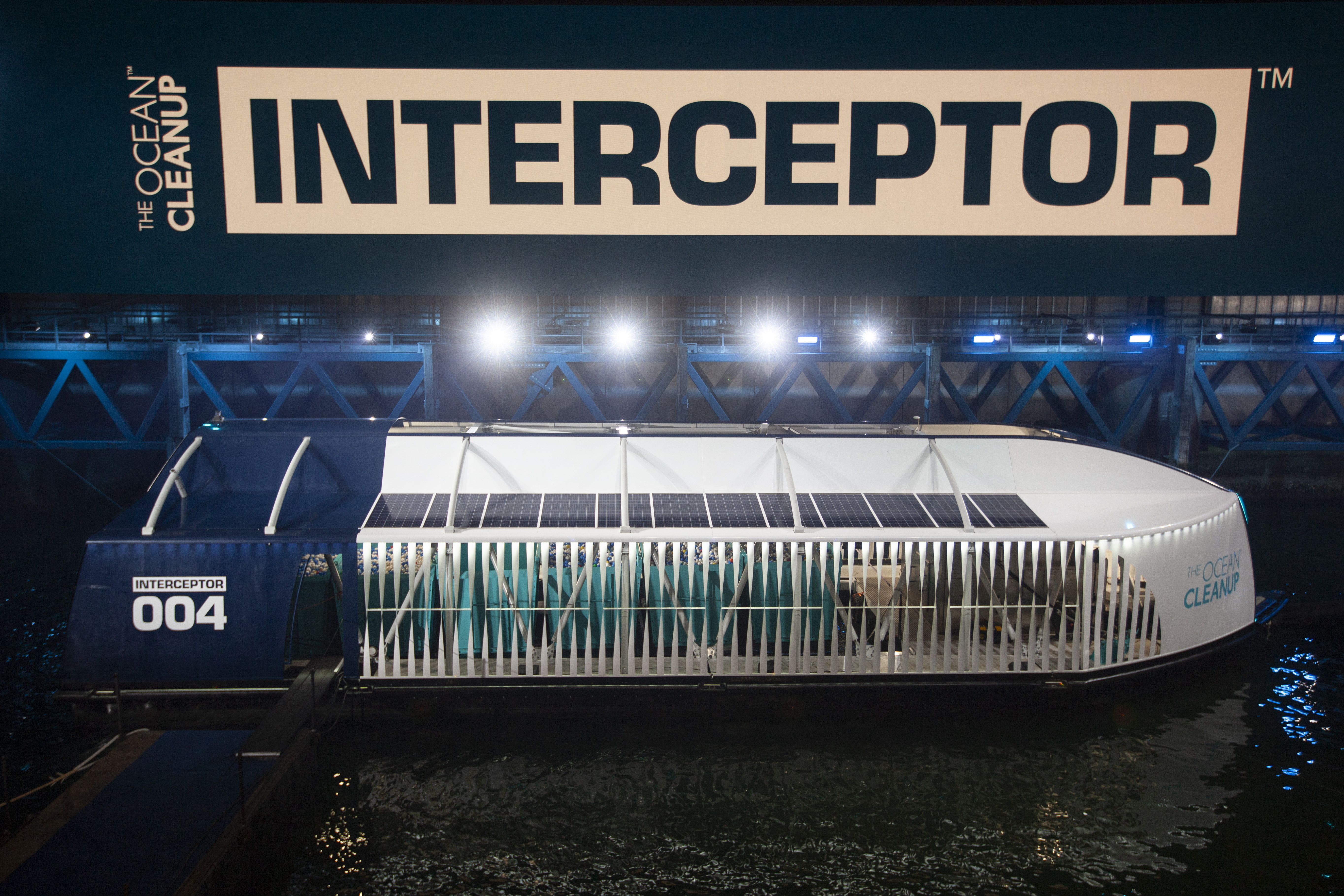 "There were some really wacky ideas," she says. "But they have huge potential because the students took ideas from military tanks, from robotics, from all different kinds of angles.

"I suspect if you were an engineer and you've been trained on a singular thing, you'd forget about those other things that you could draw from."

Sophie and her teammates, all 14-year-old girls from the Stamford High School in the UK, designed a vehicle that can work on land, mud and water to distribute an enzyme that breaks down plastic.

"We've made a vehicle and the basic premise of it is that it's going to release an enzyme into an ocean or a sea or a mud bank," she explains. "That enzyme works by breaking down the plastic PET, or polyethylene terephthalate, that's used for shampoo bottles, plastic bags and water bottles. That's a very commonly used one. And once the enzyme is dispensed from our vehicle, within a couple of weeks, maybe six weeks, it would completely break down the plastic."

Team Quartet, from the United World College in Mostar, Bosnia, based their project on magnetism.

"We basically found an experiment that managed to make nanoparticles of iron oxide that actually bind to microplastics, and in that way makes them magnetic," explains Adin. "By dispersing these nanoparticles into the water, it allows us to collect actually all of the microplastics there with the magnet."

"It's a type of vehicle that can cover both land and water," explains Kenan, who was in charge of robotics for Team Quartet. "It has different retractable wheels and retractable, mechanical and electronic parts so it can maneuver itself through the water.

"It has foot-apart compartments for the nanoparticles that are needed for the plastics to be magnetized and for the vehicle to pick up the plastics from the different spaces and bring them to land and continue the process of recycling." 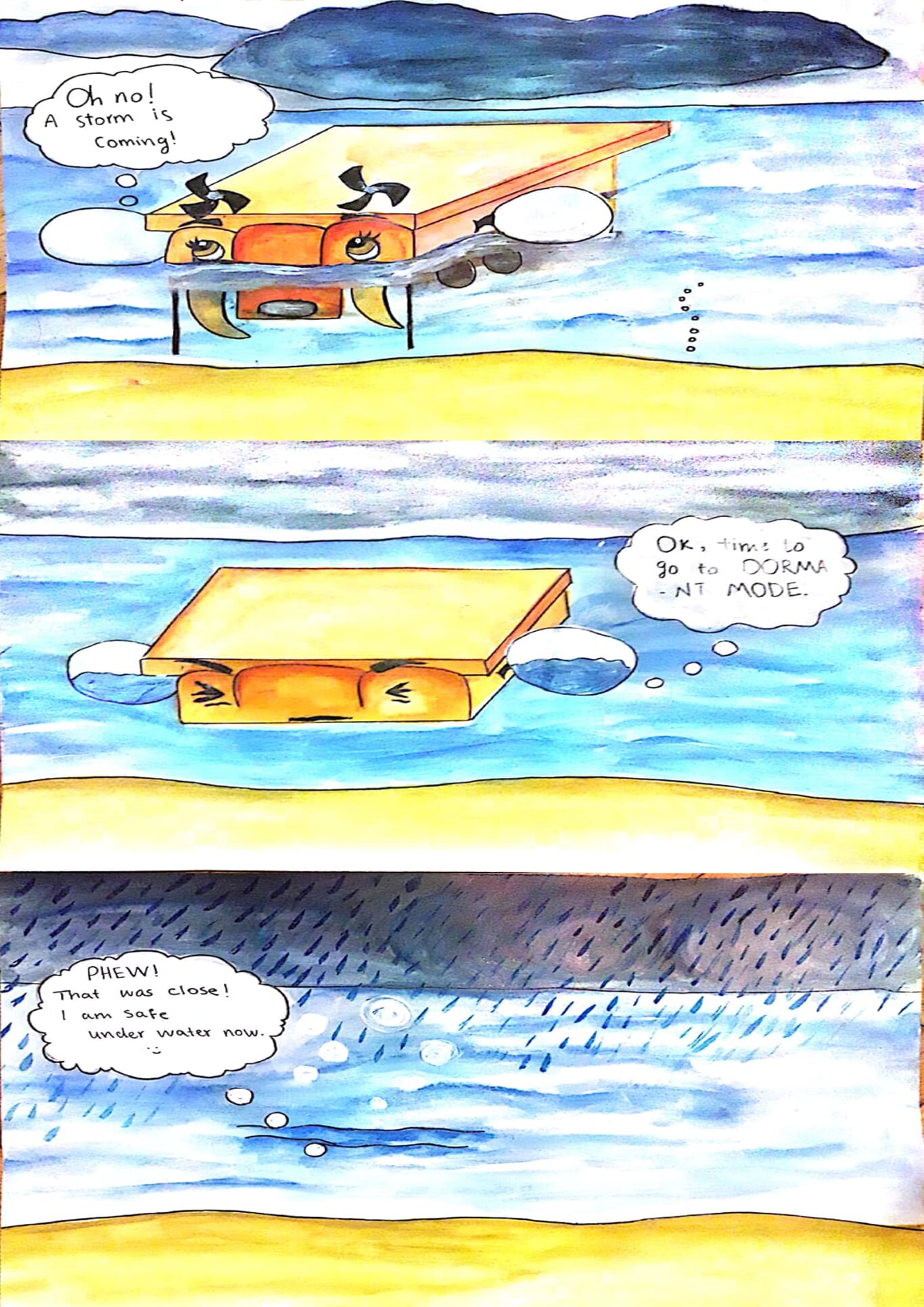 The vehicle designed by the students at United World College in Bosnia, which uses magnetization to collect plastic waste, automatically goes into dormant mode under bad weather conditions. /Team Quartet

The vehicle designed by the students at United World College in Bosnia, which uses magnetization to collect plastic waste, automatically goes into dormant mode under bad weather conditions. /Team Quartet

For the first time since its launch in 2018, the competition had to go completely online because of COVID-19.

"The main challenge we found was that we couldn't really conduct any tests because we were working online and we were isolated, all of us," says Katarina from Team Quartet. "We didn't really have a laboratory where we could conduct any test or prove that something we did was right."

The students didn't have the chance to test their projects with real models in the field, but the competition's organizers think there's potential for some of the designs to be implemented for plastic waste cleanups.

"I would say, having seen some [ideas] of this year, there are genuine potential, real-world solutions that children come to," says Hanson. "The way they can come to things with a fresh eye, they're not trapped by their own history as an adult. They bring fresh ideas, a new perspective on problems, and I think we will see some of these things eventually end up in production one day."

Young generations have been at the forefront of environmental activism in recent years, leading the world to become more aware of the current climate crisis.

"I am very happy that technology allows us to use the resources that we have around us and not hurt the environment," says Kenan.

"But rather make everything eco-friendly while helping us advance through everyday obstacles that we face, helping us improve the things that have already damaged the environment will help us save it from an inevitable, let's say, doom."

When it comes to saving the environment, the kids are definitely alright.