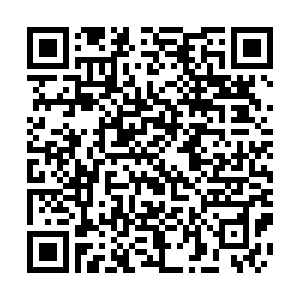 "Of course it would be in the interest of Great Britain and all member states of the European Union to achieve an orderly withdrawal."

That was Germany's chancellor, Angela Merkel, speaking to the local Süddeutsche Zeitung newspaper as a new round of intense Brexit negotiations launches at the European Union headquarters in Brussels.

It will be the first time the parties involved in the ongoing negotiations meet face-to-face since the coronavirus shutdown combined with the two sides' entrenched positions to stall progress.

It's been a while since the UK's decision to leave the EU dominated headlines, so if you need a quick recap of what's been happening in the past three years, scroll down to watch a video from CGTN Europe's The Agenda with Stephen Cole program reminding you of the key events.

Merkel has also been busy with other EU issues, because in a few days, Berlin will take over the bloc's rotating presidency, and will have to deal with pressing matters including the coronavirus recovery plan, Europe's economy, the climate crisis and many others.

In other news, British oil giant BP announced the surprise sale of its global petrochemicals business to Ineos, pulling the company out of a sector widely seen as a key driver of oil demand growth in the coming decades.

Meanwhile, Boeing's 737 Max could soon be back in the air, as flight-certification testing for the aircraft, which has been grounded since last year because of crashes, could begin on Monday. Read on to find out more about these stories and others.

The EU and the UK have embarked on a new, intense five weeks of negotiations on a deal to define their post-Brexit relationship, with London keen to wrap up issues quickly. After previous sessions, of mainly videolink talks, achieved little, the hope is that intensified discussions will finally deliver results. Britain's prime minister, Boris Johnson, caused tensions after saying he was ready to accept the consequences of no deal if common ground cannot be found.

Britain's Johnson has also promised a "Rooseveltian" boost to public spending to help the country's economy recover from the coronavirus shock and said a return to austerity would be a mistake. The prime minister said his government's emergency spending and tax measures, worth an estimated 133 billion pounds ($163.6 billion), would continue to help people and plans to increase investment would be ramped up.

Oil industry giant BP is selling its global petrochemicals business to British billionaire Jim Ratcliffe's Ineos for $5 billion. With this surprise announcement, the oil and gas supermajor said it has met its $15 billion target for agreed divestments one year ahead of schedule, as the company prepares for a shift to low-carbon energy.

Flight-certification testing for Boeing's 737 Max, which has been grounded since March 2019 because of two deadly crashes in Indonesia and Ethiopia, could begin as early as Monday, according to a Federal Aviation Administration email sent on Sunday to congressional oversight committees.

Germany's chancellor, Angela Merkel, hosts France's president, Emmanuel Macron, on Monday to discuss Berlin's upcoming presidency of the EU, ahead of key talks on a coronavirus recovery fund and the controversial EU recovery plan, with members of the bloc still unable to agree on a definitive coronavirus policy.

Starbucks and Pepsi are the latest major companies to pause or completely halt advertising on Facebook, following the long-running campaign led by civil rights organizations calling for an advertising boycott of Facebook, saying it doesn't do enough to stop racist and violent content. The "Stop Hate for Profit" campaign has said it will now begin calling on major companies in Europe to join the boycott. More than 160 companies have signed on to the boycott so far.

Oil industry manufacturing and services provider, Hunting, has said it has cut 25 percent of its workforce, citing a decline in trading within most of the group's businesses during the second quarter due to lower oil prices.

Firms in China brought in 49.8 percent of equity capital raised globally this year so far – selling shares worth $32.1 billion – setting a record that highlights the economy's earlier revival from the COVID-19 pandemic, plus the degree to which soured U.S. relations are turning Chinese firms homeward.

France's president, Emmanuel Macron, has promised 15 billion euros ($16.9 billion) of new funding to speed up the move to a greener economy, a day after the Greens crushed his party and took control of major cities in local elections.

Workers at six of U.S. retail giant Amazon's sites in Germany are striking for 48 hours on Monday in protest over lack of transparency and safety after "at least 30 to 40" staff at logistics centers tested positive for coronavirus, labor union Verdi said. Amid the scrutiny, Amazon has said it will spend $500 million on one-time bonuses, ranging from $150 to $3,000, to its front-line employees and partners working through the coronavirus crisis.

EU Trade Commissioner Phil Hogan said on Monday he will not seek to become head of the World Trade Organization (WTO) because Europe's in-tray is full and requires his undivided attention.

Austrian specialty steel maker Voestalpine has bought a railway switch plant in France and stakes in companies in China and Argentina to strengthen its production capacity in the railway business. With the acquisition of the French switch plant SEI.L (Societe d'Equipement Industriel.Lietaert), Voestalpine is positioning itself for orders from railway operator SNCF, which is expected to make significant infrastructure investments in coming years, it said.

On 23 June 2016, the UK public narrowly voted to leave the European Union. But it's now been three years of missed deadlines and little has been achieved. So just how did it get to this point? Watch our video as Stephen Cole gets back on board the Brexit Express to outline what has happened so far and what options are left. 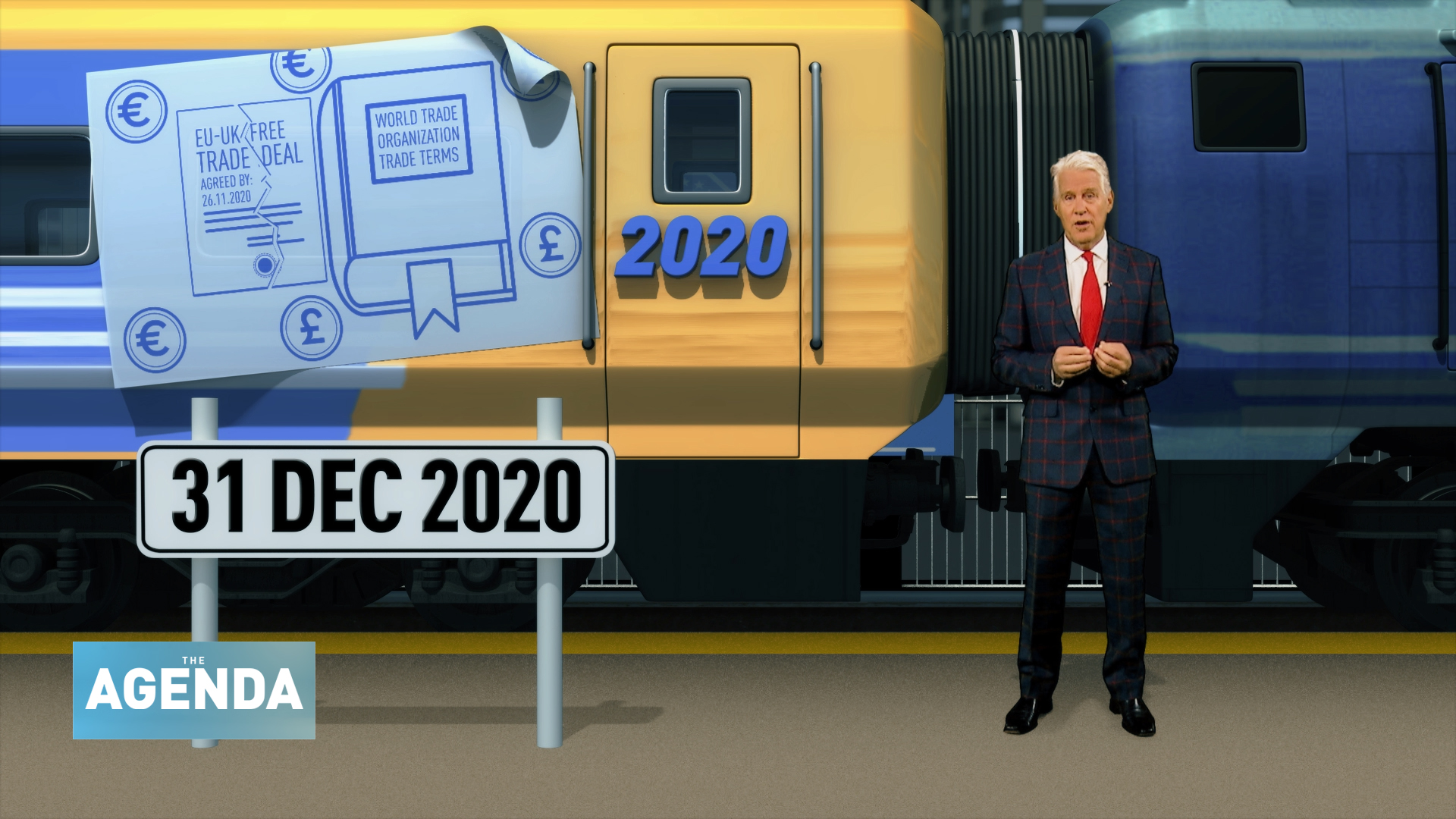 Karel Lannoo is the CEO at the Centre for European Policy Studies (CEPS). He spoke to CGTN Europe about all the latest on the EU's controversial and not yet agreed upon recovery fund.

So this coronavirus recovery program, how to pay for it, how to spend it, what would you say the main challenges are to getting an agreement here?

It's very simple, the main challenge is keeping Europe together and having a united response on which Europe has been working very hard over the past months. I think they are moving in the right direction, but the big problem is that we have to accept, meaning keeping Europe together, accept that some countries have to pay for the others. There must be unity.

Of course, this has already happened in Europe for a long time. But now, it's basically doubling the overall budget, which the EU will have at its disposal to pay essentially for those that have been most affected, which in this case, just to be very clear, is countries like Italy and Spain, that a lot of transfers of money will go to the countries in the south, which have been most affected by the crisis.

The problem thereby is that we need to find a key, how will the money be spent? On what basis? What country will get how much? What is the conditionality? What conditions have to be fulfilled for a country getting something? But also a big problem is that Spain and Italy, certainly Italy is a rich country. Why would the rich countries then get so much compared with, for example, a poor country – take Bulgaria, Romania, which will get much less? Why should these countries get so much more? And of course, this is related to the economy, because Italy is an important economy, it has a decline of 10 percent of its GDP. You need to, in the interest of the EU as a whole, to try to make sure that this decline can be stopped and can be redressed as soon as possible.

So there are huge questions then about how potential funds could be distributed. But, also, there are questions about how and whether it could or should be paid back. I mean, is there really a one-size-fits-all solution?

This question is still entirely open, and I think it will be a mixture of both. Meaning it will be long-term loans from the EU, which will be given to these countries a part in grants and a part in parts which will have to be paid back, and that's part of this discussion. Is there a one size fits all? I mean, it will have to be adapted to every country.

But at the same time, what is extremely important for the EU, by having a doubling of the budget of the EU, by having the EU machinery which is involved and which dictates its norms, you will have more and more of an EU norm for money being spent for what kinds of sectors, what kind of areas and so on. So in the end we get more unity in a way, a federal construction like the EU works.

You said that the unity of the European Union is really what's very important. So more broadly, what do you think the impact of Coronavirus has been on EU unity?

Now, it's difficult to say, but I would say the first month was bad, bad for the EU because there were many parts you could read in the media putting into question the EU, the EU's existence... But I think the EU has managed to react very rapidly, certainly compared with 2008, the previous financial crisis. I know after three months we have an entire kind of response in place now it's up to the member states of the EU, which are 27, to respond to this and to put the elements which the administration of the EU, the European Commission has put on the table to come to an agreement on this and to say to the administration, now we agree, now we can work it out and now you can implement this. But that's unity, and of course, you will get different responses from different people in Europe if you were to ask that question.

You mentioned 17 July, the EU summit. Germany is taking over the presidency of the EU, what difference will that make?

If you're the chair of the EU for some of the council meetings, that means, certainly for economic affairs, that means that you're the moderator of the meeting between the 27 states and that, at the end, you will have to make a decision or make sure that a decision can be made in the interest of the EU as a whole.

If Germany were to be only a participant, it would defend its interests, now, Germany will have to defend the European interest. And we know what Merkel's position is, so I think we can only expect that Germany will do whatever it can to make sure that there is an agreement on what is on the table now.

The recovery of economic sentiment (ESI) in the eurozone picked up in June, recording the sharpest month-on-month increase on record, after a modest boost in May, but still well below the average of 100 since 2000. The sharpest rebounds in consumer sentiment were for retail trade and service, as lockdowns begin to ease.

The Employment Expectations Indicator (EEI) also improved sharply for the second month in a row, thanks to markedly improved employment plans in all surveyed sectors, which have so far recovered roughly 40 to 60 percent of the record losses incurred due to COVID-19 in March and April. 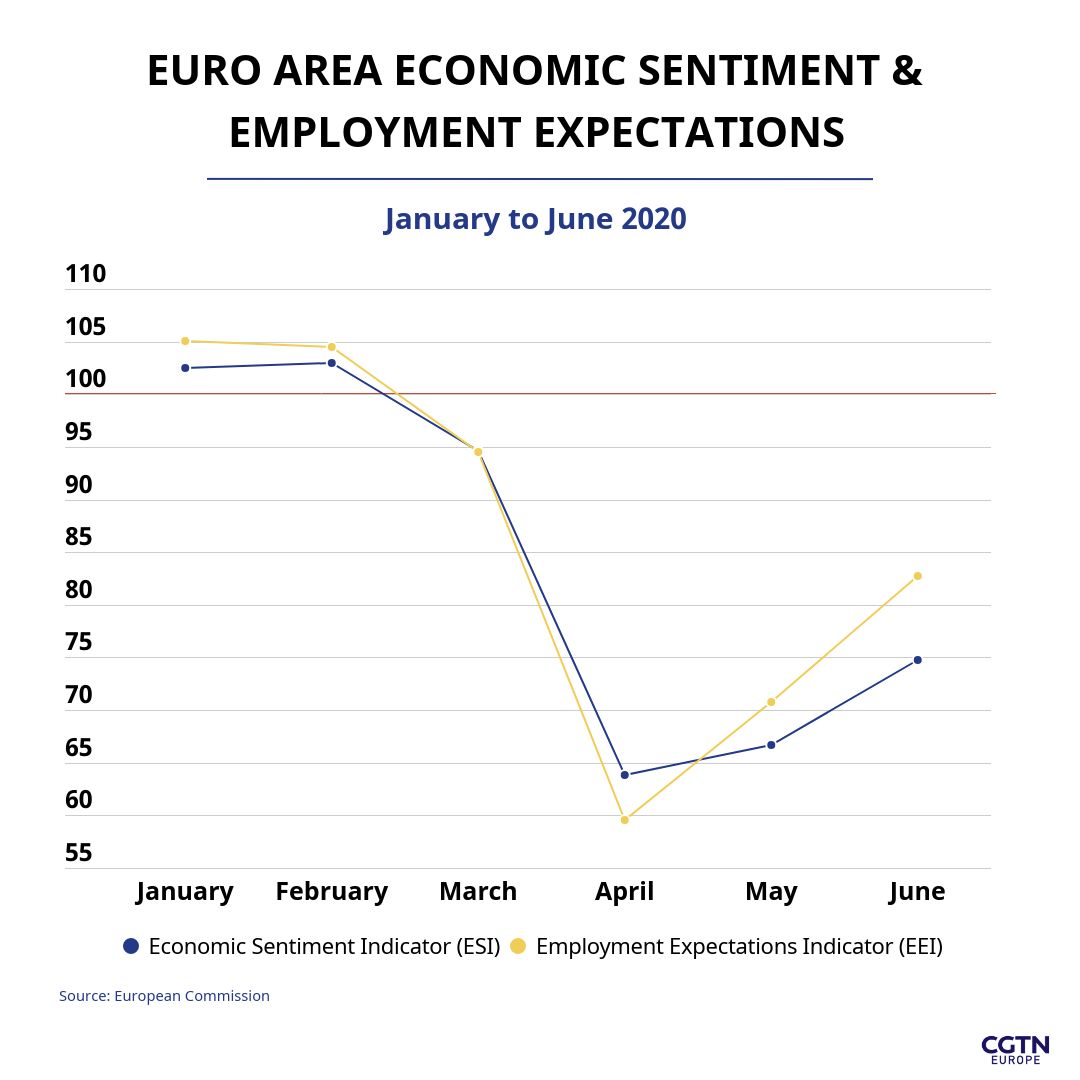