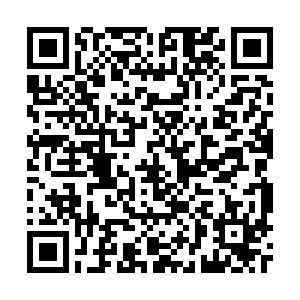 - UK Prime Minister Boris Johnson is to announce the further easing of lockdown regulations on Tuesday. Johnson will also announce whether the country's two-meter social-distancing rule will be relaxed.

- The Netherlands reported zero COVID-19 deaths for the first time since early March on Monday as the total number of deaths in the country remained at 6,090.

- The Disneyland Paris theme park will reopen to the public in phases from 15 July.

- France's movie fans ventured back to cinemas on Monday for the first time, with one cinema in Paris placing toy "Minions" (characters from the Despicable Me movies) at intervals in the seats to ensure social distancing was observed.

- A new 'no swab' saliva test is being trialed in Southampton, UK this week as the government tries to find a simpler way of testing people from home. More than 14,000 health workers will participate in the trial.

- Police in The Hague, Netherlands said they detained 400 demonstrators who refused to leave a protest against the government's social-distancing measures.

- The Spanish government is to decide this week whether to restrict its travel restrictions further to allow travelers from outside Europe to enter the country.

- Thousands of schools in France began to reopen on Monday, after three months of closures across the country.

- Germany's Robert Koch Institute reported on Sunday that the country's reproduction rate has leapt to 2.88, a sharp rise over the weekend.

- Five players from Serbia's Red Star Belgrade football team have tested positive for COVID-19 just days after they were involved in a cup-semi final against rivals Partizan Belgrade in front of 20,000 fans. 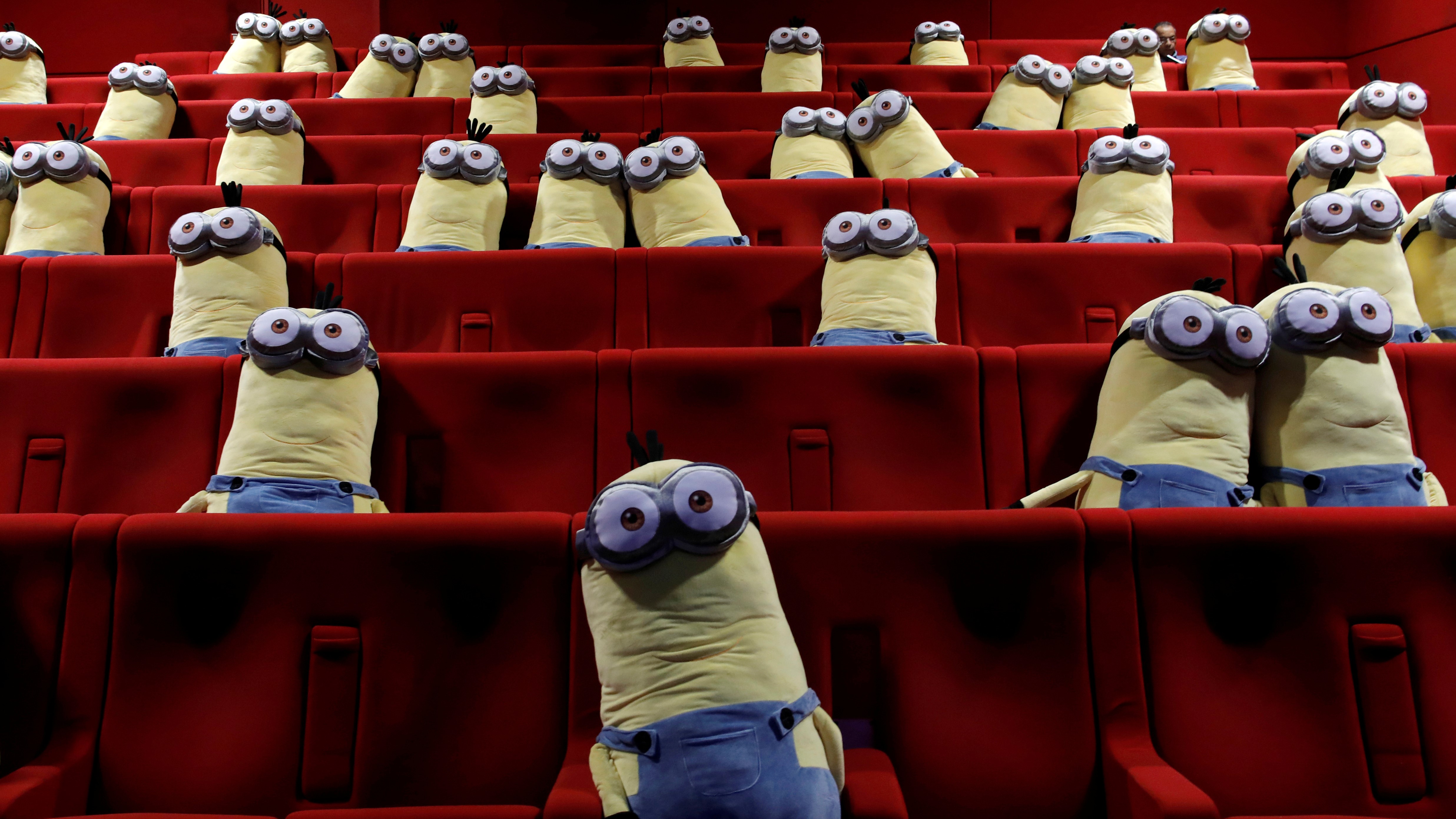 As visitors returned to cinemas in France, the MK2 cinema in Paris came up with its own special way of ensuring social distancing. /Reuters

As visitors returned to cinemas in France, the MK2 cinema in Paris came up with its own special way of ensuring social distancing. /Reuters

Saliva testing could potentially make it even easier for people to take coronavirus tests at home, without having to use swabs
-  Matt Hancock, UK health secretary

With Spain coming out of its state of emergency, the government is now allowing the country's 17 regions to implement their own measures as they edge towards a new normality.

One of those regions, Navarra in the north of Spain, normally hosts the world famous "running of the bulls" in Pamplona. However, that has been cancelled with the regional government giving out the message: "Fiestas are important, but not essential."

Hotels in the region are allowed to open but only at 75 percent capacity and large events are limited to 1,000 people outdoors.

The measures seem to be working, with Navarra not registering a single COVID-19-related death in more than a week.

After lifting the state of emergency in Hungary, Prime Minister Viktor Orbán has claimed the Hungarian healthcare system performed better than those in Western European countries in fighting the pandemic.

"It must be considered a great achievement to save the lives of tens of thousands of people in Hungary, and in the meantime it must be borne in mind that this success was the result of discipline and cooperation," Orban said in his weekly public radio slot.

He added that if a second wave of infection should come, Hungary "will not hesitate to take the necessary legal and economic steps in order to save people's lives."

Orban said the new law means "the powers of the chief medical officer are strengthened, the necessary protective equipment is available and the warehouses are full." 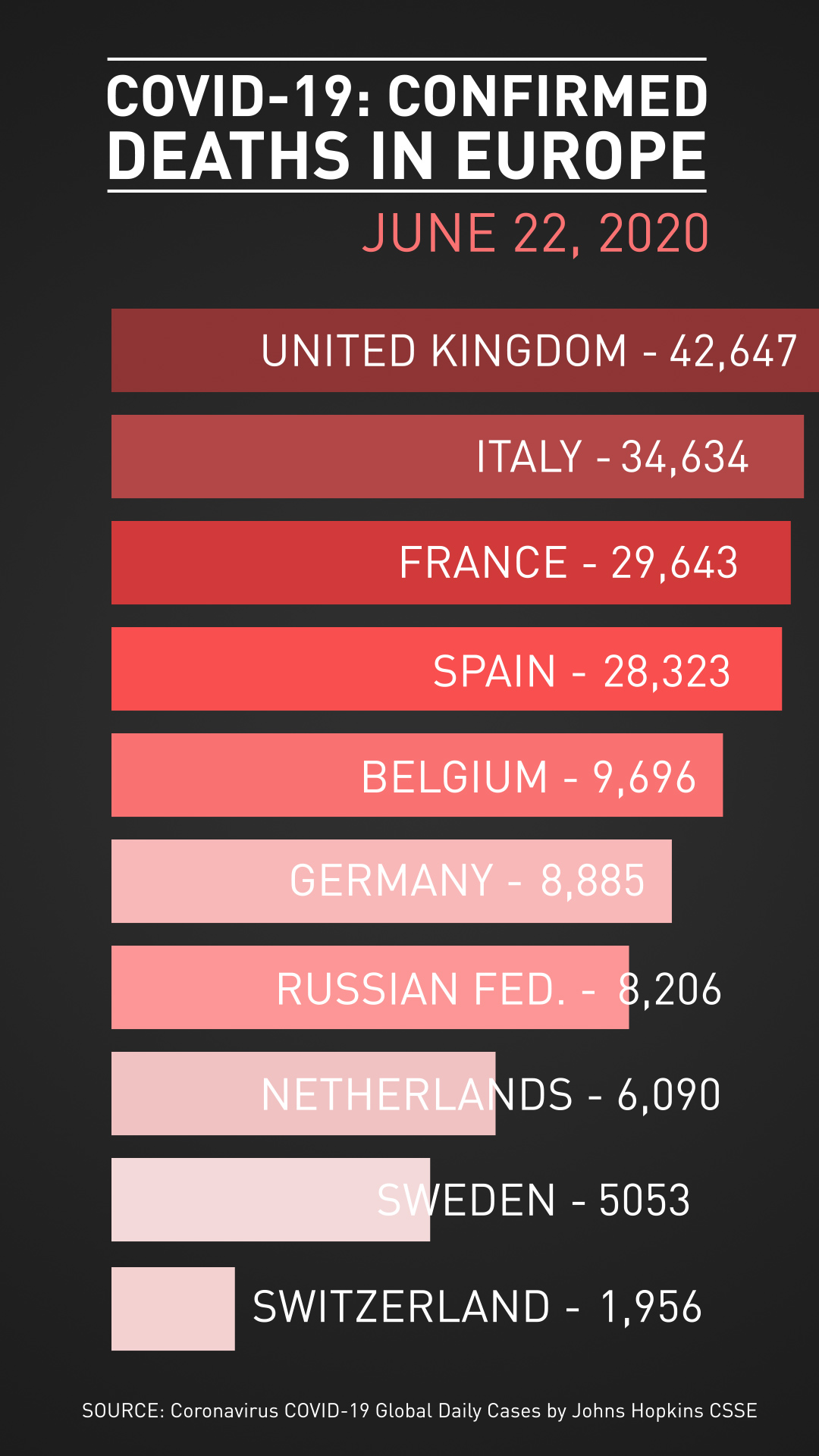 The Robert Koch Institute (RKI) reported on Sunday that the country's reproduction rate had leapt to 2.88.

Several localized outbreaks have led to the sharp rise, principally at a meat processing plant in North Rhine Westphalia where 1,331 people have tested positive for the coronavirus. There have also been clusters of new cases in Magdeburg in the state of Saxony-Anhalt and in the Neukolln district of the capital Berlin in recent days.

On Monday morning, several schools in Dortmund were closed after pupils tested positive for the virus.

On Saturday, RKI had stressed that due to the relatively low total case numbers nationally, and the localized nature of each outbreak, "a nationwide increase in case numbers is not anticipated."

On Sunday, the Institute's stance appeared to have shifted: "Further developments need to be monitored closely in the coming days, especially in regard to whether case numbers are increasing outside of outbreak contexts."

On Monday morning, Jens Spahn, Germany's health minister, took things one step further: "Only with decisive action on-site in East Westphalia can a spread across Germany be prevented."

If Germany, of all countries, struggles to prevent a second surge in cases, that will be a worry to its neighbors. Is Europe ready to reopen? We are not at that stage yet. But the next few days will be critical.

It may be closing time, but Belgian partygoers are refusing to go home. Over the weekend, police broke up several late-night parties which spilled into the streets when bars closed at 01:00. The crowds, which numbered in the hundreds, paid little respect to social-distancing rules. In Anderlecht, police had to disperse 500 people at 05:00.

It's been an ongoing problem since bars were allowed to reopen earlier this month. Top virologist Marc Van Ranst suggested police start closing squares as a preventative measure.

Belgium averaged 90 new coronavirus cases a day last week. China has reimposed lockdown measures in Beijing for a much smaller number of infections. Boris Johnson will consult the so-called C-19 cabinet today about opening the hospitality and tourism sectors soon. Pubs, restaurants and hairdressers are all up for potential easing on 4 July as is, in some form, the two-metre distancing rule.

Social bubbles are also said to be on the list with considerations under way for either two-household bubbles or a possible limited selection of people from more than two households.

There are reports of a new test starting trials at the University of Southampton. It's intended for home use, involving spitting in a pot rather than a painful swab, and intended to be ready in an hour. If successful, it would be hailed as a game-changer for a post-lockdown tracing program.

Fifty Conservative members of parliament have signed a letter to Boris Johnson urging him to abandon plans to relax Sunday trading laws.

There were happy faces this morning all across France at thousands of elementary schools, primary schools and high schools. As children returned to schools after three months of closure.

At elementary schools, there are no strict rules anymore for the children, apart from washing their hands every hour. All children over 11 years old, however, will need to keep at least one meter apart and will have to wear face masks.

However, summer holidays start in just two weeks' time, which means the children will be off school again for another two months.