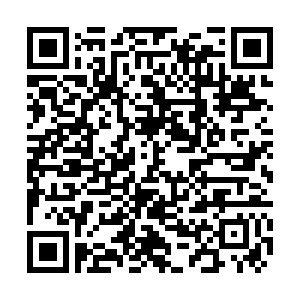 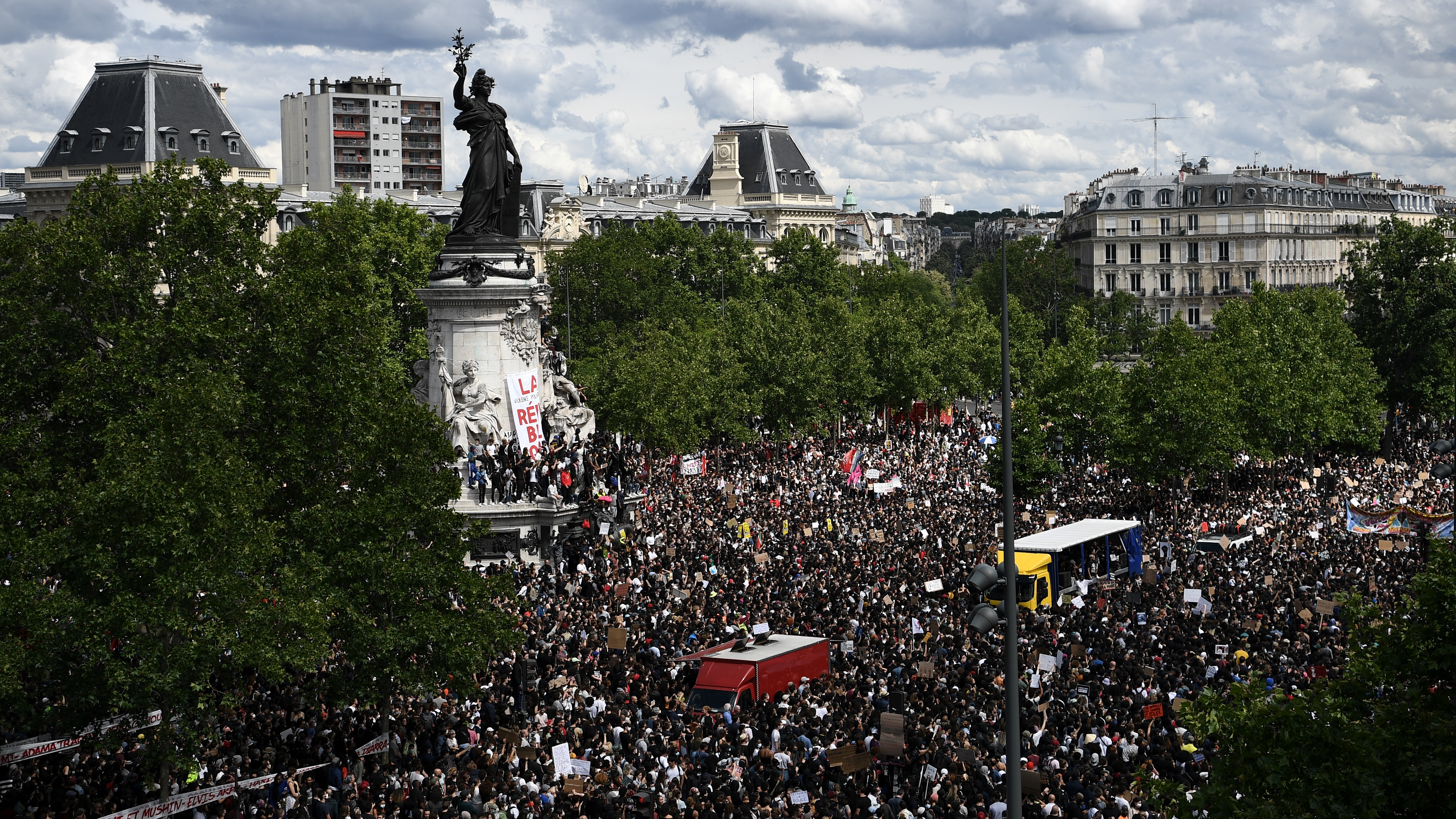 Black Lives Matter protesters took to the streets in their thousands in Paris and other European cities, including London, where there were clashes between police and groups linked to the far-right.

A wave of anti-racism demonstrations continues to sweep around the globe following the death of George Floyd at the hands of police officer in the U.S. as he was being arrested last month.

Central areas of Paris were packed full of people as they put the anti-racism cause ahead of the risk of spreading COVID-19. There were chants of "no justice, no peace" while some climbed the statue of Marianne, in the Place de la Republique. Riot police were forced to use tear gas briefly in one incident.

There were scuffles in Trafalgar Square and near the Houses of Parliament, in London, as police sought to keep far-right and Black Lives Matter protesters apart.

The cause of Floyd being killed by the police has resonated around the world, especially in deprived areas of Paris where some residents with an immigrant background claim they have been unfairly treated by law enforcement officers. 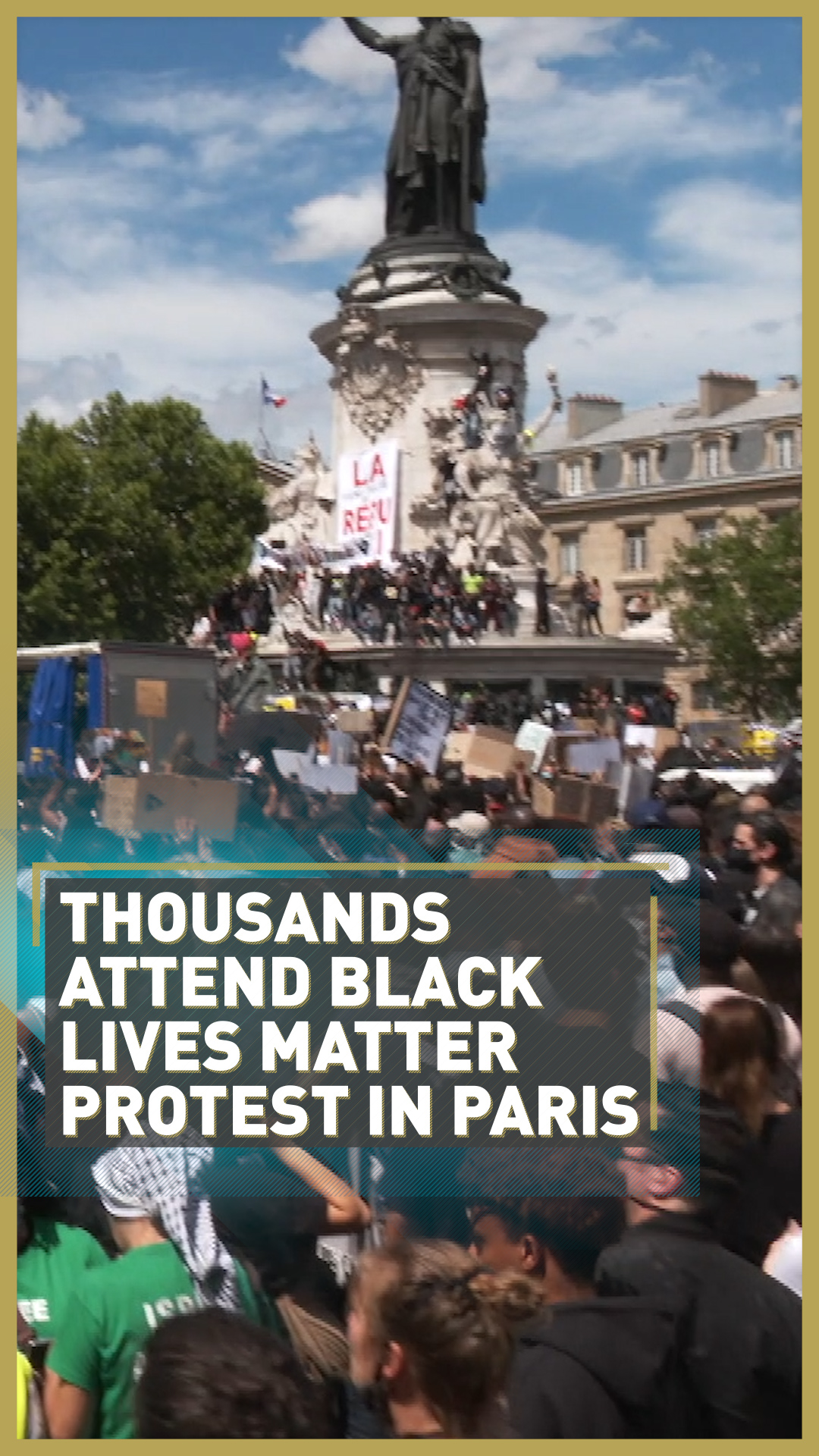 Assa Traore, sister of 24-year-old Adama Traore, who died near Paris in 2016 after police detained him, addressed the protest.

"The death of George Floyd has a strong echo in the death in France of my little brother," she said. "What's happening in the United States is happening in France. Our brothers are dying."

One banner carried by the crowd in the Place de la Republique read: "I hope I don't get killed for being black today." Another carried a message for the government: "If you sow injustice, you reap a revolt." 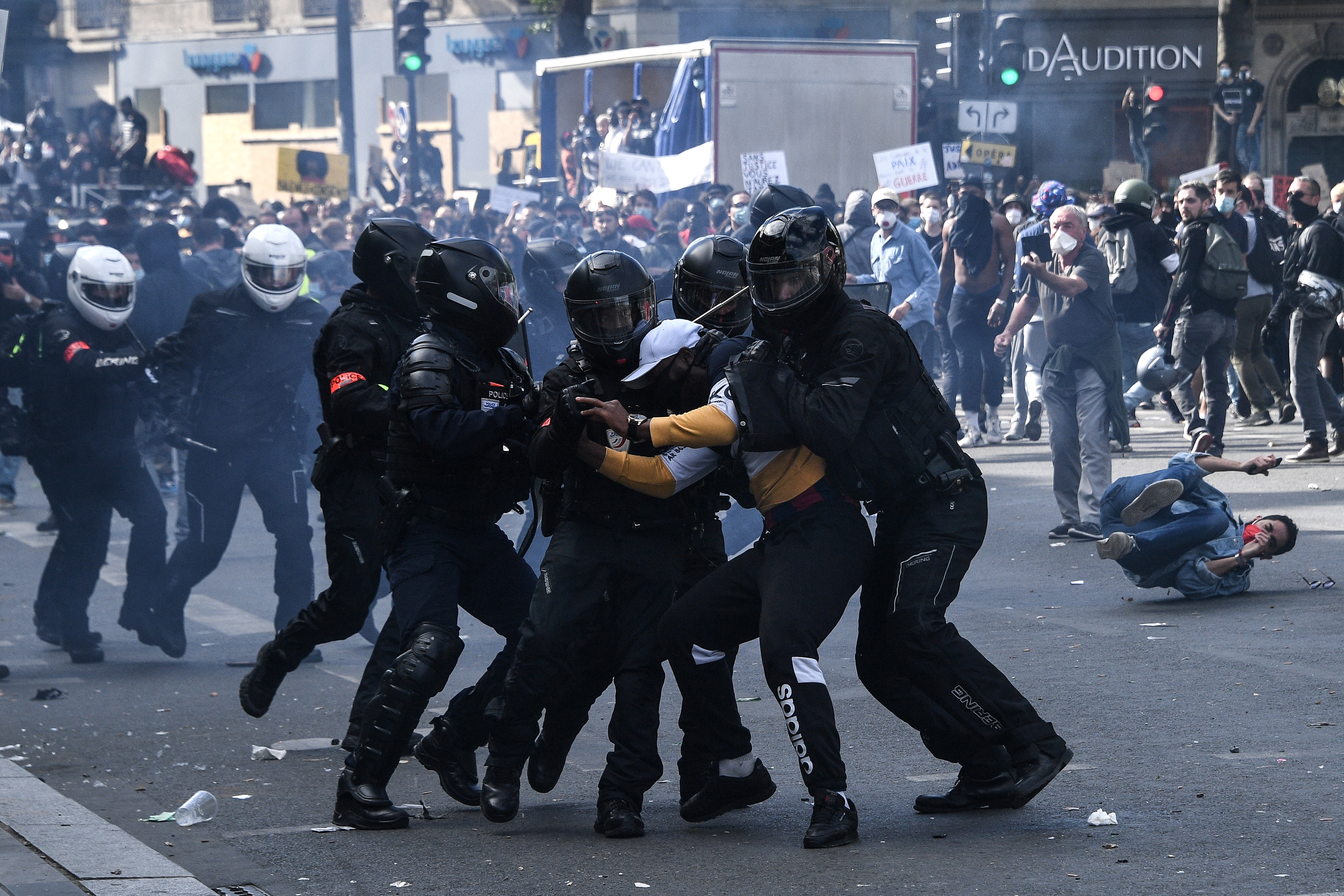 There were pockets of violence in Paris where police were forced to use tear gas. Anne-Christine Poujoulat/AFP

There were pockets of violence in Paris where police were forced to use tear gas. Anne-Christine Poujoulat/AFP

Far-right activists unfurled a banner with the words "anti-white racism" from the rooftop of a building overlooking the protest. Residents emerged onto their balconies and ripped it up using with knives and scissors, to cheers from below.

In London far-right groups were involved in clashes with some police and Black Lives Matter protesters.

London's mayor Sadiq Khan and the Metropolitan Police had asked people to stay away from a planned Black Lives Matter march because of fears there would be clashes with counter-protests by far-right groups – in addition to the coronavirus-spreading possibilities of mass demonstrations.

He tweeted: "It is clear that far-right groups are causing violence and disorder in central London, I urge people to stay away." 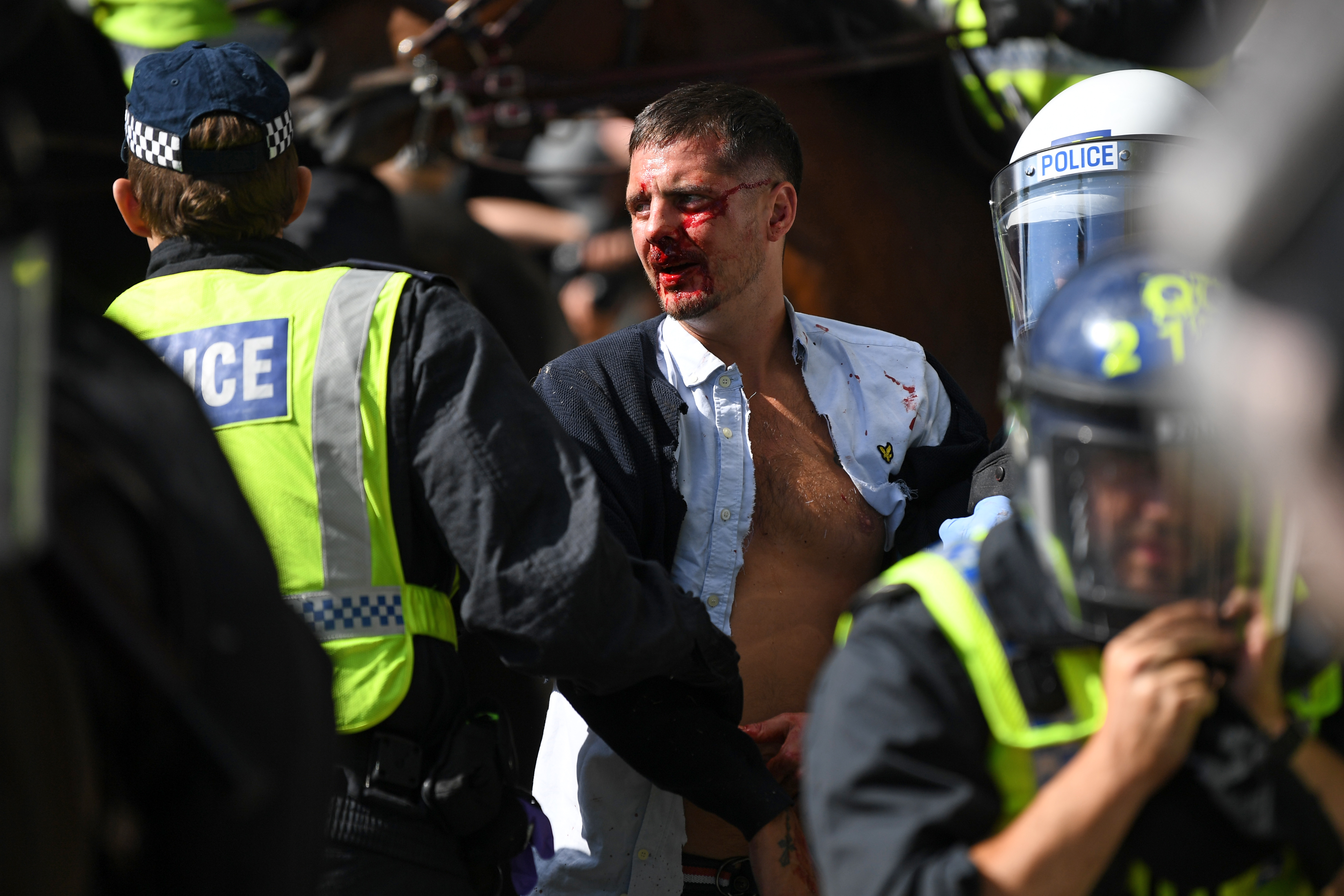 A man is injured after violence in London. Daniel Leal-Olivas/AFP

A man is injured after violence in London. Daniel Leal-Olivas/AFP

There were fewer protesters in London on Saturday - a Black Lives Matter march was brought forward a day to Friday.

In and around London's Parliament Square, hundreds of people wearing football shirts, describing themselves as patriots and chanting "England, England" gathered alongside military veterans by the Cenotaph war memorial.

The far-right groups said they wanted to defend British culture, in particular historical monuments, after the toppling of the statue of a 17th century slave trader in the port city of Bristol last weekend sparked calls for others to come down.

"Winston Churchill, he's one of our own," they also chanted, near the statue of the World War II leader, which last weekend was sprayed with graffiti reading: "Churchill was a racist." 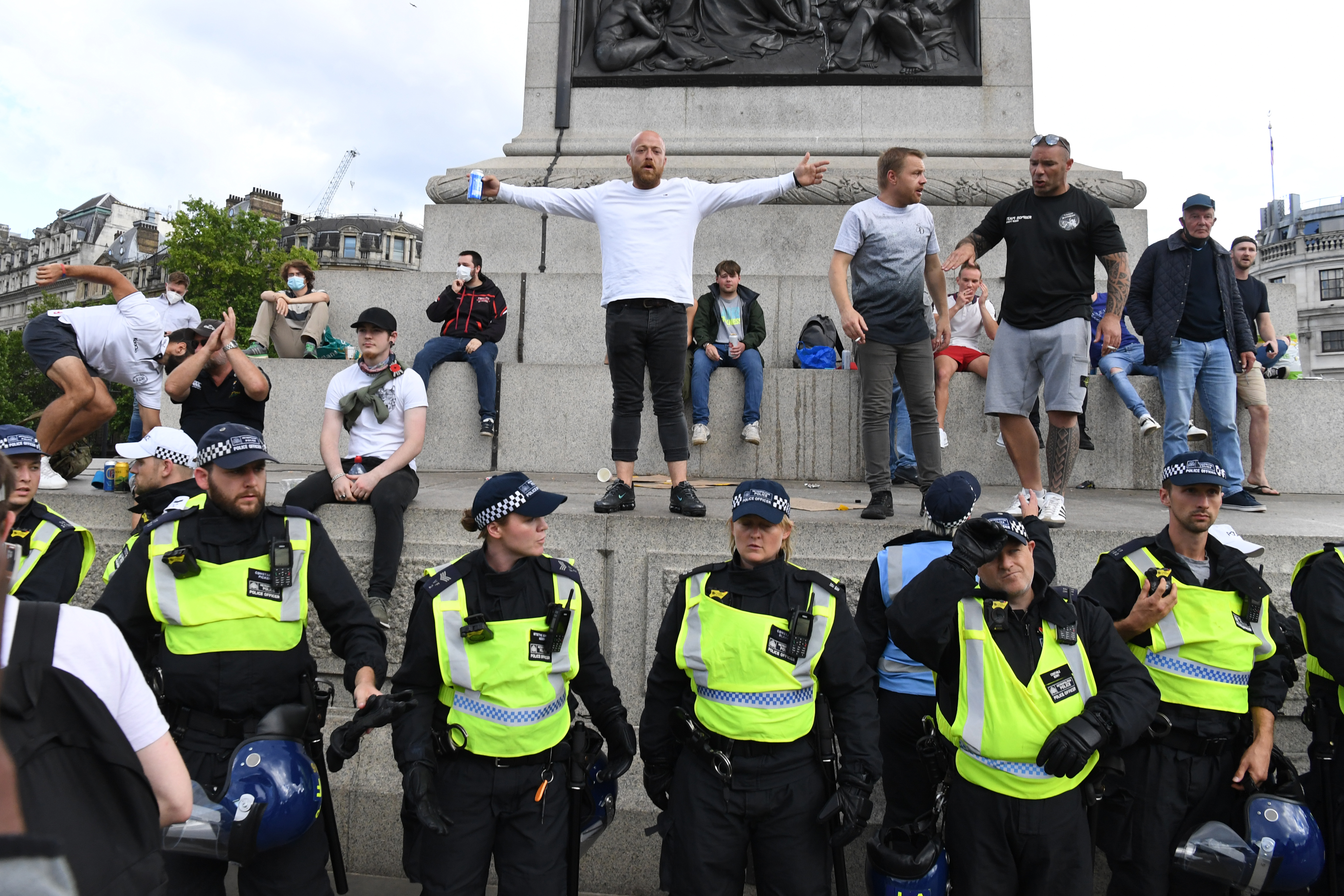 There were also protesters in London who said they wanted to protect statues. Daniel Leal-Olivas/AFP

There were also protesters in London who said they wanted to protect statues. Daniel Leal-Olivas/AFP

Churchill 's statue was invisible behind a grey protective covering - as were the statues of Nelson Mandela and Mahatma Ghandi.

Shirley Gleason, stood nearby in Parliament Square holding a banner, told CGTN:  "All these people who keep coming here and defacing all the things that have been around all my life. I'm 55 now, know what I mean, I've seen these things all my life. It's the past, why can't people leave the past, in the past."

There were Black Lives Matters demonstrations in many cities and towns across the UK and across Europe too, including the Swedish capital Stockholm. 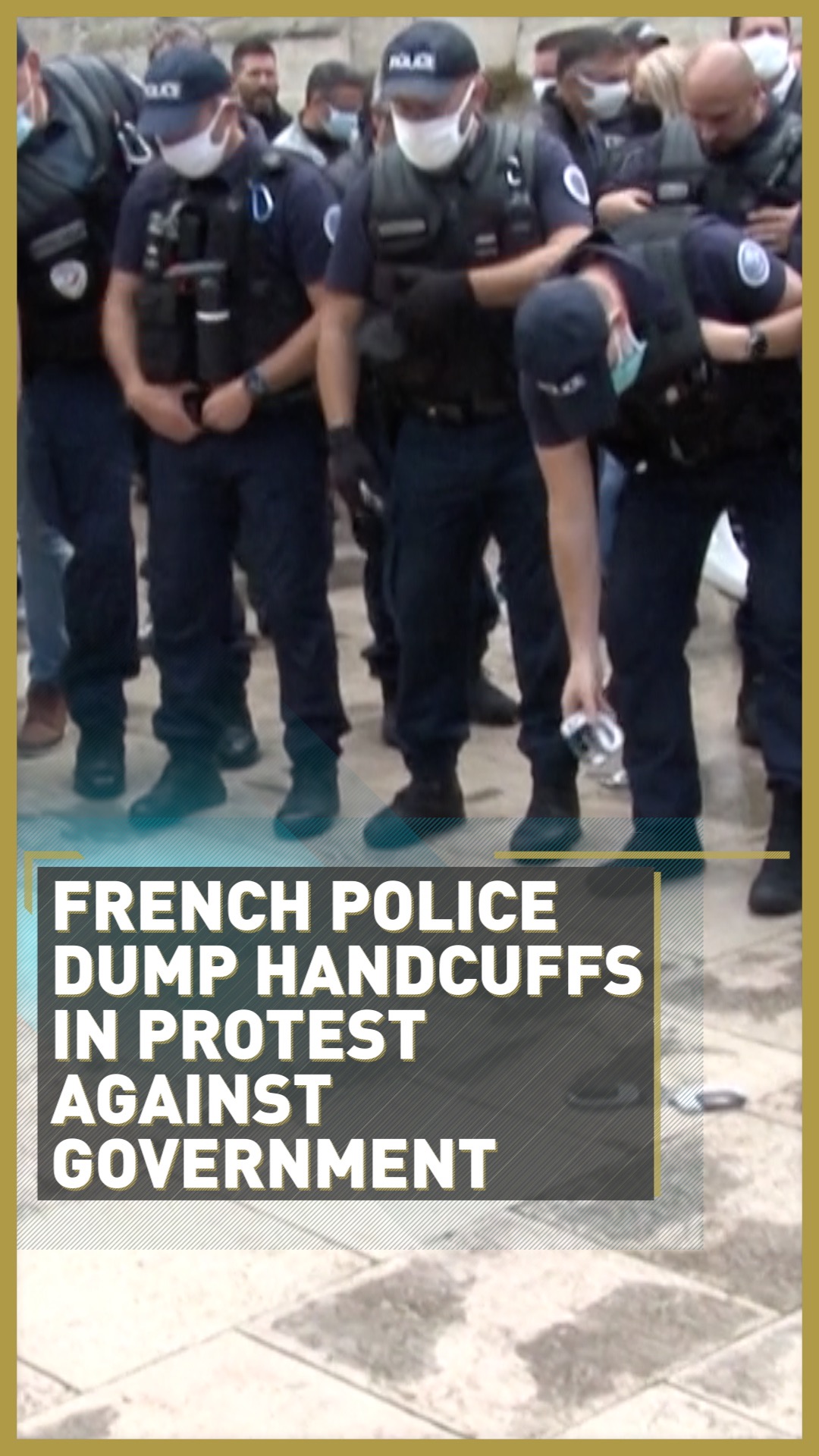 The protests have provoked a debate on statues and whether they glorify racist figures from the past or should be considered in historical context and used as a memorial, so new generations do not forget what happened.

The role of police has also been questioned after the Floyd case. In France, law enforcers claim they have been unfairly picked out. They marched in Paris on Friday and protested in other cities, including Bordeaux, claiming they have been scapegoated by the government.

Fabien Vanhemelryck, secretary-general of the Alliance union, said that the country's police force were the most closely monitored in the world.

He added: "Therefore when there are certain abuses by a tiny minority, let us not stigmatize all police officers."