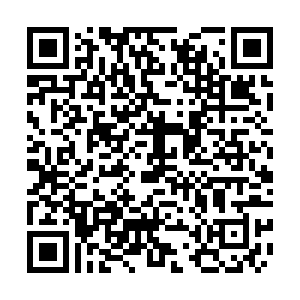 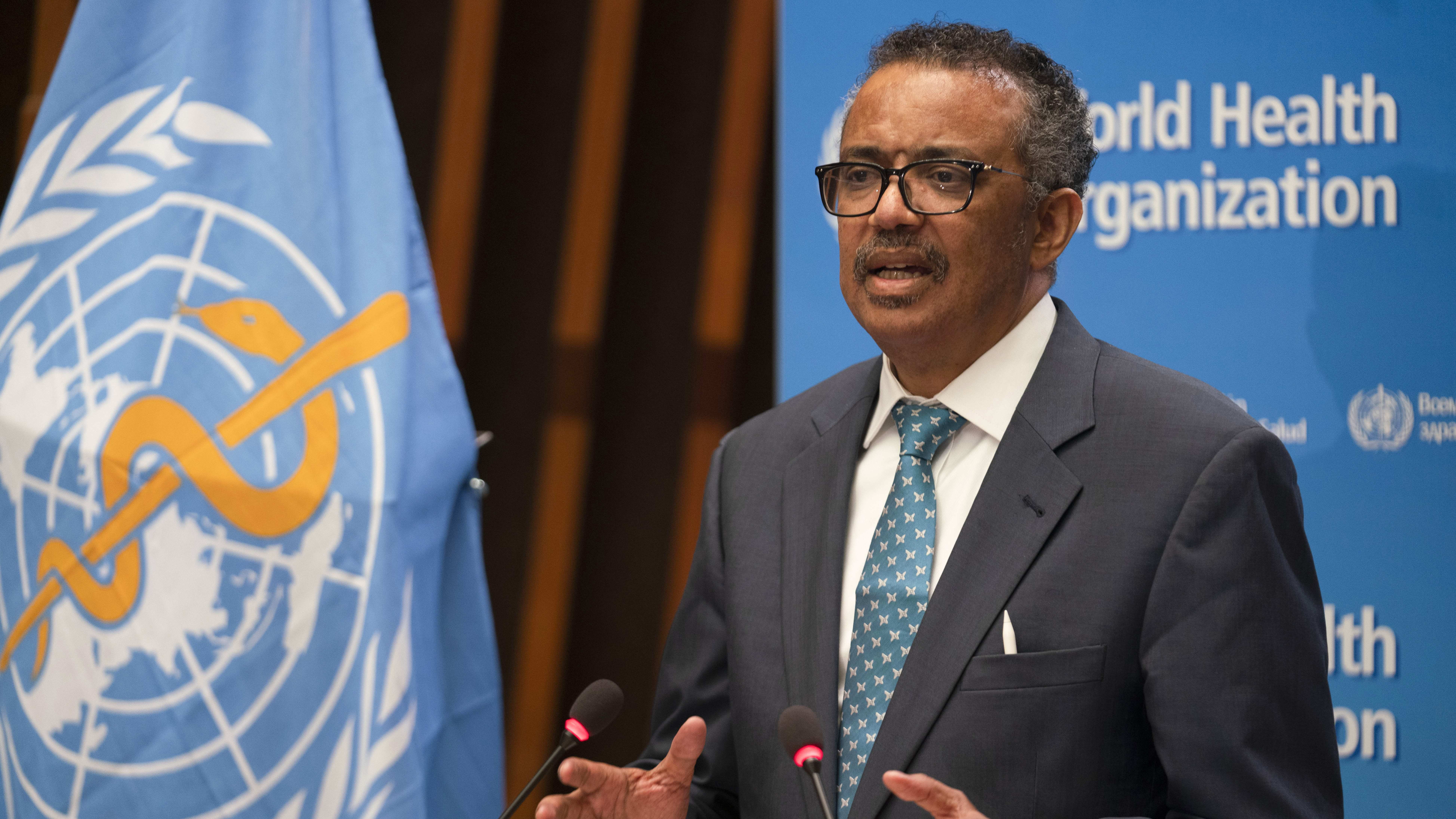 Director-General of the WHO, Tedros Adhanom Ghebreyesus, said during the WHA73 he welcomed the proposed resolution for an impartial, independent and comprehensive evaluation. /Christopher Black/World Health Organization/AFP

Director-General of the WHO, Tedros Adhanom Ghebreyesus, said during the WHA73 he welcomed the proposed resolution for an impartial, independent and comprehensive evaluation. /Christopher Black/World Health Organization/AFP

The World Health Organization has said an evaluation of the global response to COVID-19 will be initiated "at the earliest appropriate moment."

The promise was made during the seventy-third World Health Assembly (WHA73), a meeting of the WHO's decision-making body, which was held virtually for the first time.

During the meeting, consensus backing was won among the health body's 194 states for a resolution drafted by the European Union calling for the evaluation of WHO's performance.

Director-General of WHO, Tedros Adhanom Ghebreyesus, said he welcomed the proposed resolution for a comprehensive evaluation to "review experience gained and lessons learned and to make recommendations to improve national and global pandemic preparedness and response."

"We all have lessons to learn from the pandemic. Every country and every organization must examine its response and learn from its experience. WHO is committed to transparency, accountability and continuous improvement," Tedros said, adding that the review must "encompass the entirety of the response by all actors, in good faith."

China's president Xi Jinping said Beijing would support an impartial evaluation of the global response once the pandemic is brought under control.

"This work needs a scientific and professional attitude, and needs to be led by the WHO. And the principles of objectivity and fairness need to be upheld," he told the meeting via video.

President Xi added: "All along we have acted with openness and transparency and responsibility." 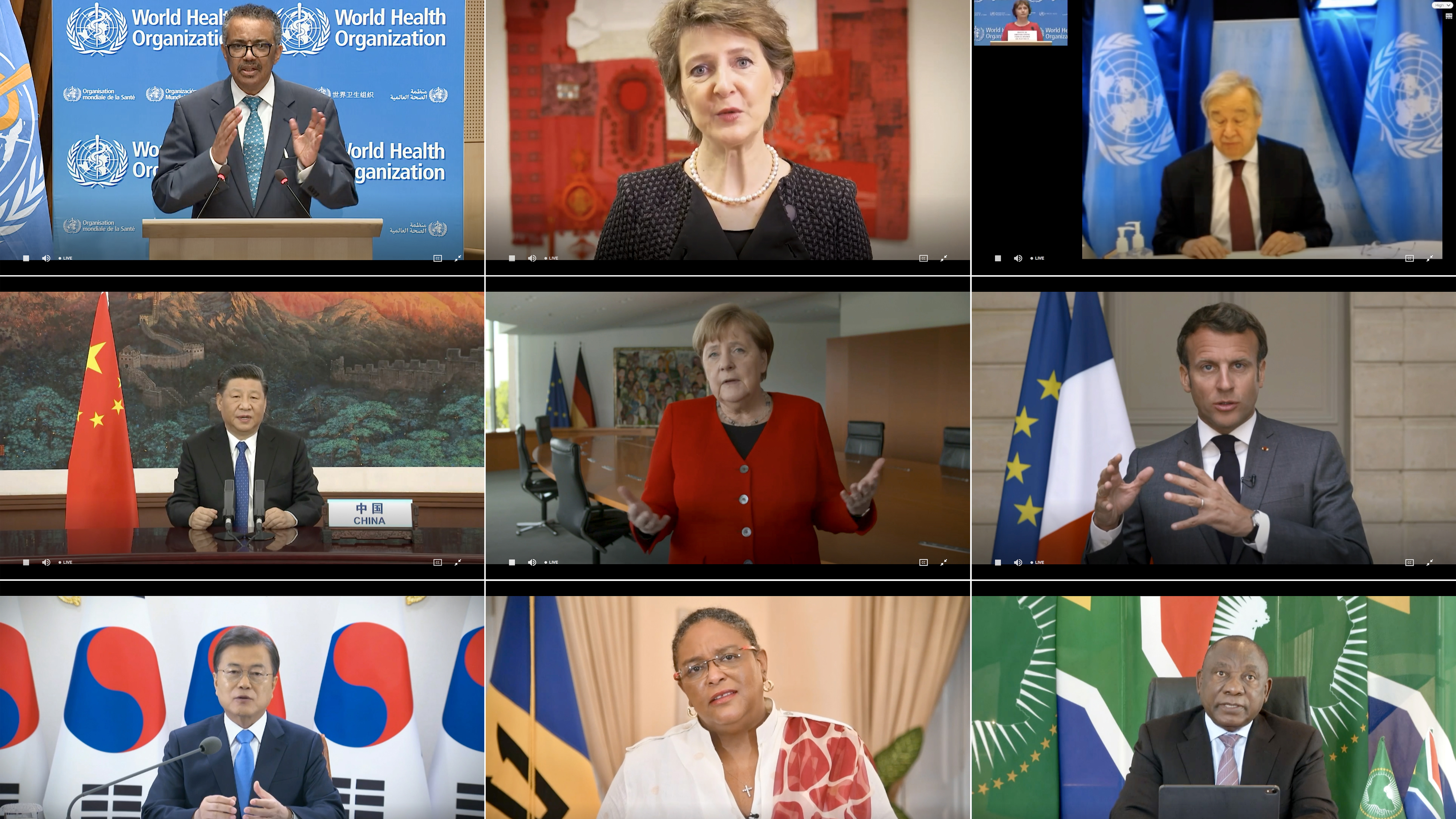 World leaders and health ministers called for unity in the response to the global coronavirus crisis. /World Health Organization/AFP

World leaders and health ministers called for unity in the response to the global coronavirus crisis. /World Health Organization/AFP

United Nations Secretary-General Antonio Guterres opened the event, criticizing nations who had ignored the WHO's recommendations.

"Different countries have followed different, sometimes contradictory, strategies and we are all paying a heavy price," he warned in a video address.

"COVID-19 must be a wake-up call. It is time for an end to the hubris," he said. "Either we get through this pandemic together, or we fail."

Guterres also backed the WHO saying it "is irreplaceable - it needs immense resources particularly to provide support to developing countries which must be our greatest concern. We are strong as the weakest health systems."

Across Europe, world leaders and health ministers used their messages to back an investigation, but also to reiterate their support for the World Health Organization and its importance, as well as the need for a united and collective global response.

Germany's chancellor, Angela Merkel, said "the WHO is the legitimate world organization for the area of health, and so we should continue to work to improve procedures within the WHO, and we also need to look at the financing to ensure it is sustainable."

"I am convinced that we will be able to overcome this pandemic when we work together, and that will help us to achieve this more rapidly," she added.

France's president, Emmanuel Macron, said that "only if we join forces together will we beat this pandemic, and we need the WHO for its irreplaceable coordinating role, for its scientific expertise, for its knowledge of the situation on the ground."

Macron added that the WHO also needs everybody else, "that's precisely why recently France has decided to substantially increase our financial contribution to this organization."

He said: "With the WHO, with our European partners and with everybody involved in global health. We have launched an initiative called Act A. The purpose of that is to offer a massive support to research, to speed up the results of medical research, and to ensure that we can guarantee universal access to the tools we need to fight the pandemic," adding that any vaccine must "be a global public good."

The UK echoed those sentiments saying that COVID-19 was a "shared challenge" that must be defeated through a "collective response." Health secretary Matt Hancock said: "We all have a collective responsibility here. But for now, we must all remain focused on the fight against the virus. And of course, a vaccine will be our best weapon in this fight."

"I'm proud that the UK is leading this work, that we're the biggest donor to the global effort to find a vaccine and that UK research efforts are leading the way to build on this. The UK will be hosting a global vaccine summit on 4 June," he added.

Member states hope the WHA can fashion a joint response, including commitments on equitable access to potential treatments and vaccines. "We have come together as the nations of the world to confront the defining health crisis of our time," WHO director-general Tedros Adhanom Ghebreyesus told the assembly.

The chance of unity and reaching an agreement on global measures to address the crisis could be threatened by steadily deteriorating relations between countries over the pandemic.

U.S. President Donald Trump has fiercely questioned the WHO's performance during the pandemic and also attacked China's handling of the early stages of the crisis.

Last week, Trump threatened to cut ties with China and has repeatedly made unproven allegations that the virus originated in a Chinese lab.

He has also suspended funding to the WHO over accusations it initially downplayed the seriousness of the outbreak, and was too close to Beijing.

The U.S. also appears to be at loggerheads with Europe over future vaccine access, after France was angered last week when French pharmaceutical giant Sanofi's suggested Washington would be first in line for a COVID-19 vaccine. The company later retracted its statement.