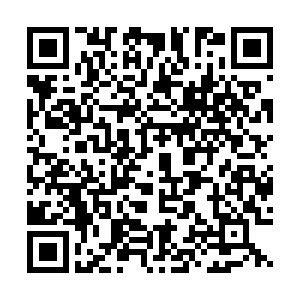 - The UK's death toll has officially overtaken Italy's after it reached 29,427 confirmed fatalities on Tuesday, a rise of 618 in the past 24 hours. Italy's daily death toll rose by 236 on Tuesday to put the country's overall figure at 29,315.

- A French hospital has discovered it treated a man with COVID-19 back in December 2019 after it retested old samples from pneumonia patients.

- The World Health Organization has said the discovery by French scientists was "not surprising" and has urged other countries to investigate further.

- Spain's daily death toll rose by 185 in the past 24 hours, pushing the overall total to 25,613. This marks the third consecutive day that Spain's daily death increase was below 200. More than 70 percent of the 1,318 new cases in the country have been among medical staff, according to the health ministry.

- Virgin Atlantic has said it will cut more than 3,000 jobs and will be closing its Gatwick Airport operations as a direct result of the pandemic.

- Some of Paris's streets will be reserved for cyclists when the lockdown is lifted in France to try to limit crowds on public transport. In total, 50 kilometers of lanes normally used by cars will be for bicycles only.

- As of Tuesday, supermarkets in Belgium are allowed to sell face masks. Previously only pharmacies were allowed to.

- France is hoping its contact tracing-app called "stopCOVID" will be ready to deploy by 2 June.

- The UK begins to test its contact tracing-app on Tuesday on the isle of Wight, an Island off the south coast of the country, before planning to roll it out to the rest of the country as soon as possible.

- Finnish packaging firm Huhtamaki said it will ramp up production of single-use protective face shields across five sites across Europe. Its aim is to make 8 million shields per week by June.

- Bulgaria has announced that schools will remain shut until September. The only exceptions are those pupils in 7th or 12th grade, who are sitting important exams, which go ahead in rooms with no more than 10 people, strictly observing social distancing regulations.

- Austria's health minister said on Tuesday that the loosening of its lockdown three weeks ago, has so far not led to an increase in cases or deaths.

- Dutch airline KLM has announced it will be resuming some of its operations, running daily flights from Amsterdam to Barcelona, Madrid, Rome, Milan, Budapest, Prague and Warsaw. All passengers will be expected to wear a face mask that covers their mouth and nose. 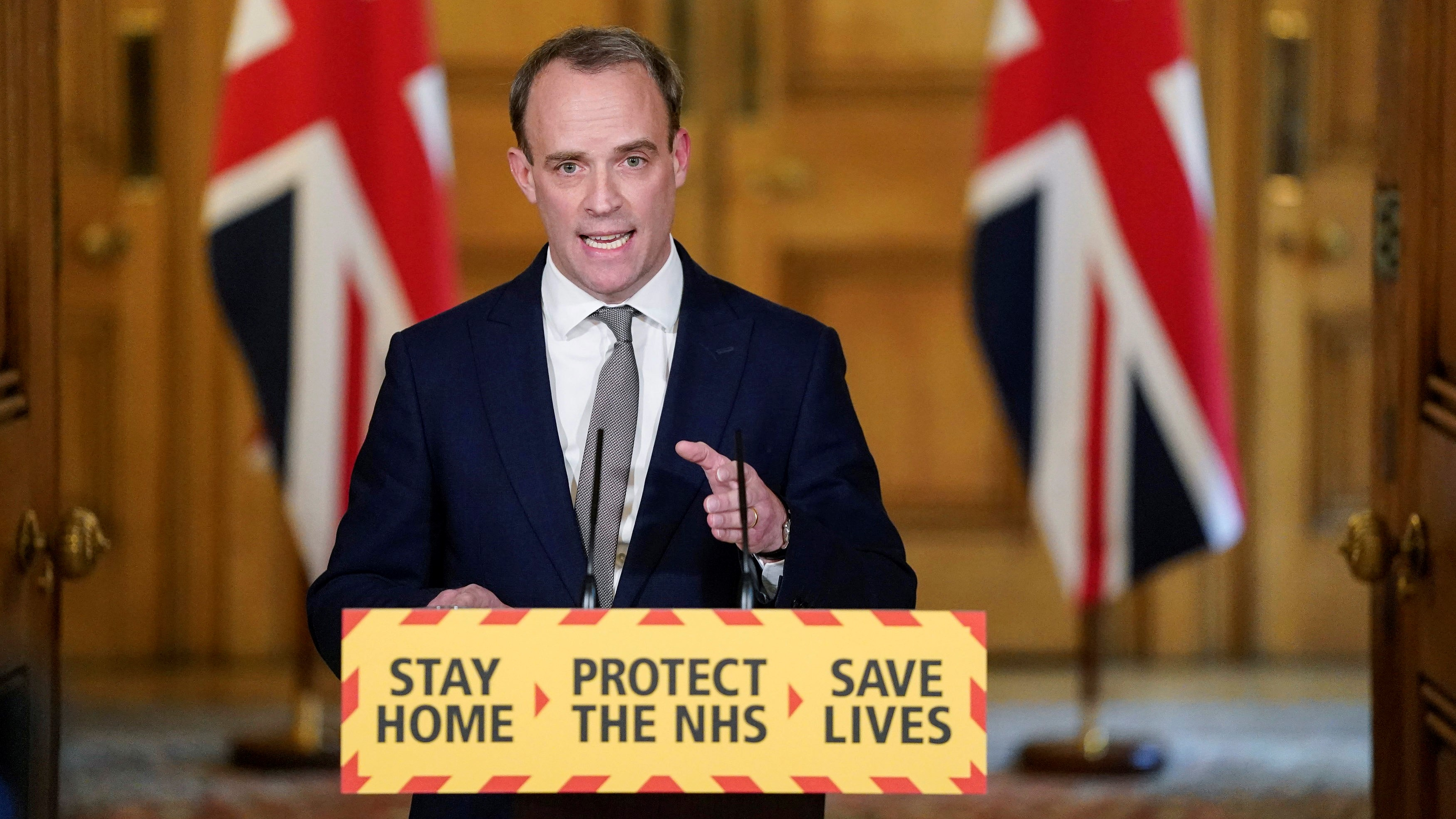 The UK's first secretary of state, Dominic Raab, announced the country's death toll had surpassed that of Italy, making it the highest in Europe. /AP

The UK's first secretary of state, Dominic Raab, announced the country's death toll had surpassed that of Italy, making it the highest in Europe. /AP

The European Commission came in just shy of its 7.5 billion euros ($8.1 billion) target during a global fundraising event on Monday afternoon, despite allowing previous pledges to be counted.

The money will go towards developing a vaccine, treatment and diagnostics to fight COVID-19.

More than 40 countries made pledges, with one notable absence: the U.S. It didn't even show up for the event. That's raising concerns of an "America First" approach when a vaccine is developed, especially if it is developed and manufactured in the U.S..

Supermarkets in Belgium will start selling face masks on Tuesday, which had been limited to pharmacies and to people with a prescription.

According to RTLInfo, tens of millions of masks will be on offer, but customers will only be able to purchase a certain amount. The price is also being controlled.

A box of 50 masks will go for around 30 euros ($32.50), which is close to the cost price. The trade federation said if there is a mark-up, the extra money will be donated.

A patient in France who had the coronavirus last year has been speaking to the French media.

Amirouche Hammar says he was admitted to hospital in December for what he thought he was a serious case of the flu, but he "had severe chest pain and was gasping for air."

On Monday, the head of resuscitation at two hospitals in Paris said that one of 24 samples retested from patients treated in December and January, who tested negative for the flu, came back positive for Covid-19.

That patient has now been named as Hammar. This revelation means someone was already ill with Covid-19 almost a month before the first three patients were officially declared positive in France. 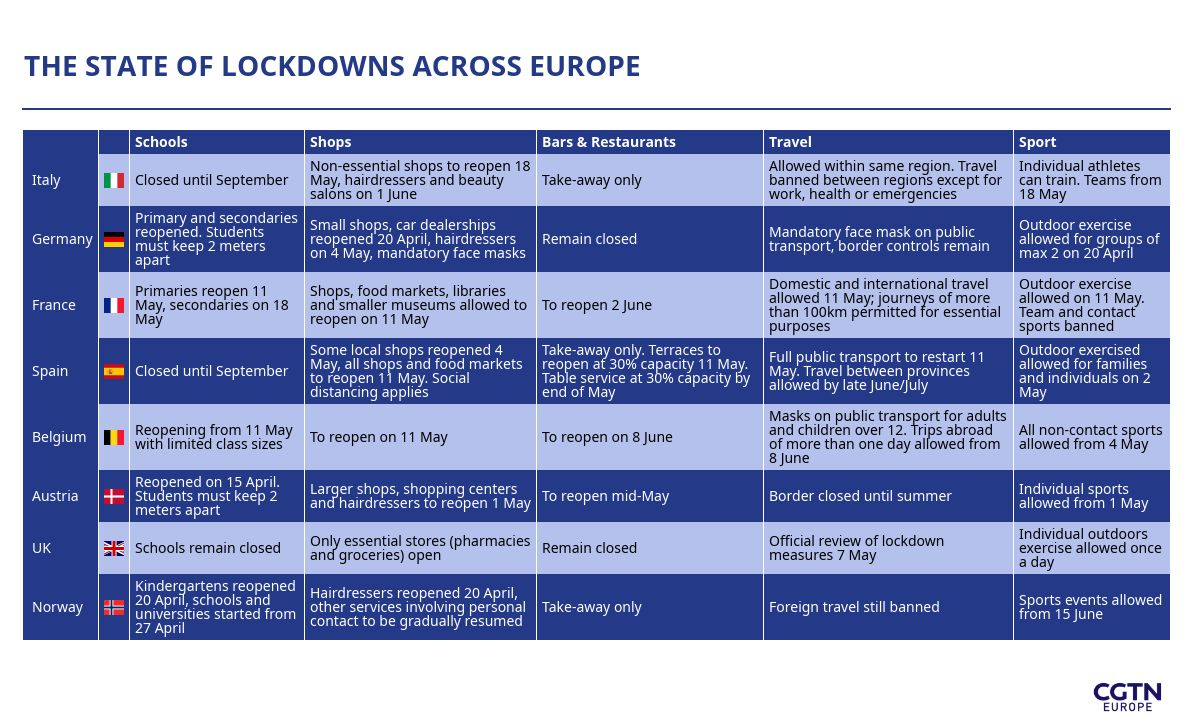 Prime Minister Viktor Orban has accused the European People's Party of an "unprecedented attack and disinformation campaign" against Hungary in recent weeks.

Orban's letter is a response to a call from 11 countries in the EPP, Europe's largest political alliance, to have Hungary's ruling party Fidesz kicked out.

In early April, the Hungarian parliament passed legislation to give Orban's government extraordinary powers to rule by decree for an indefinite time, as a response to the coronavirus pandemic.

Orban said he and his country have been attacked unfairly in the past on the basis of biased ideological propaganda, but this was the "most despicable and most cynical."

"At a time when we are fighting for effective action against the coronavirus pandemic worldwide, when human lives are at stake, a coordinated attack on us without a real basis has been launched," he said.

Spain partially opened for business on Monday, with many stores including hairdressers boasting a roaring trade, as they welcomed customers again after seven weeks.

The measures are the latest part of Spain's de-escalation plan as the country edges out of lockdown.

There was also good news for the government with the latest daily death toll figures remaining under 200.

Prime Minister Pedro Sanchez is still expected to ask for another extension to the lockdown on Wednesday. The current state of alarm is due to end at midnight on 9 May.

However, the main opposition Popular Party is saying it may not support another extension, meaning the vote on Wednesday could be a lot closer than previously thought. 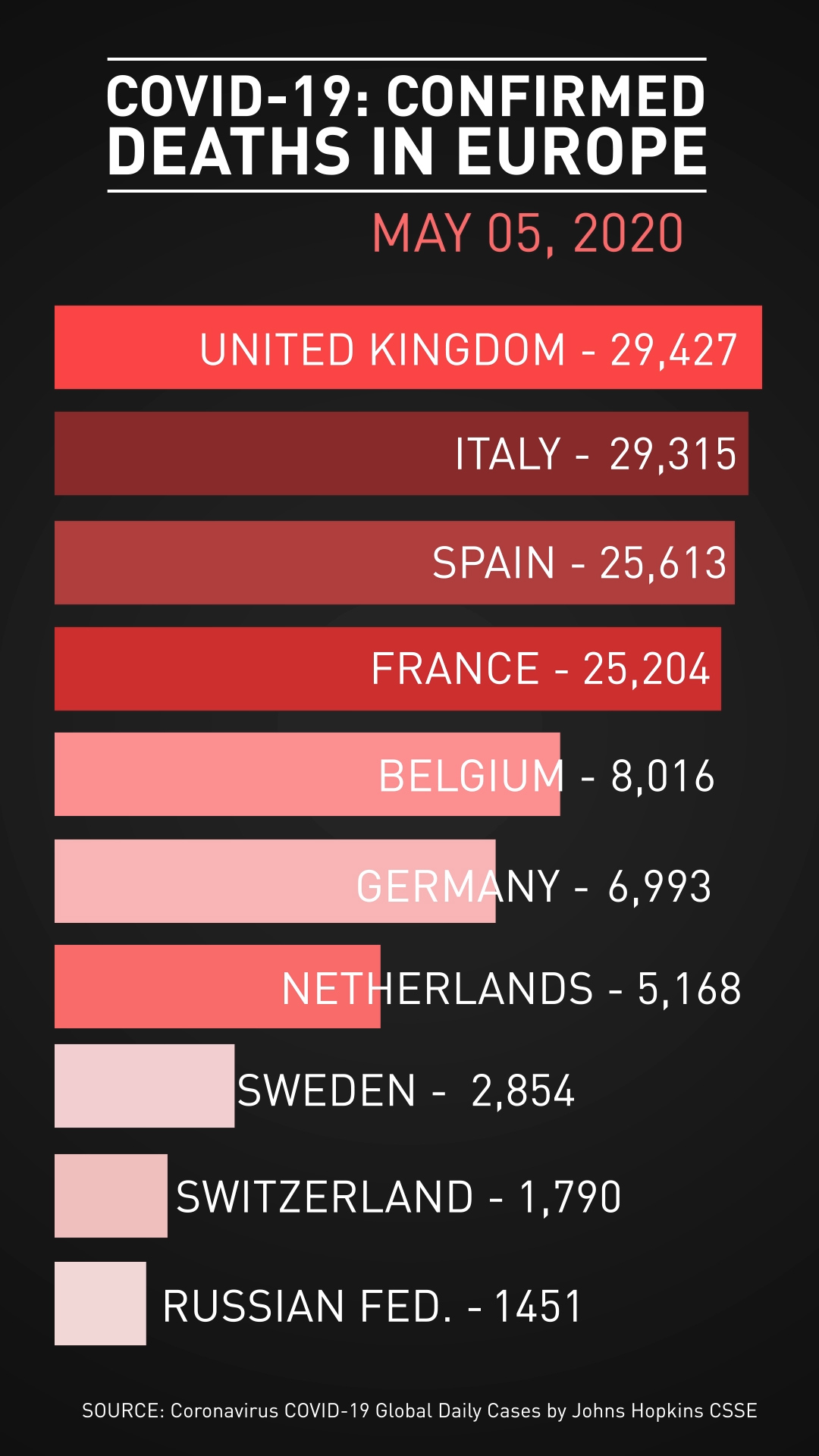 By Nicole Johnston in the UK

The UK has Europe's highest COVID-19 death toll after the government revealed a further 618 fatalities, pushing the total to 29,427 – above that of Italy.

Last week, British Prime Minister Boris Johnson said the country is past the peak of infections, while on Monday, the daily death toll was 288, the lowest since March.

Meanwhile, the UK has started trialing a new COVID-19 tracing app on the Isle of Wight. The public will start downloading it on Thursday. It's part of a program to test, track and trace in the UK, with 18,000 "tracers" being employed. But the government has been criticized for abandoning tracing in March. 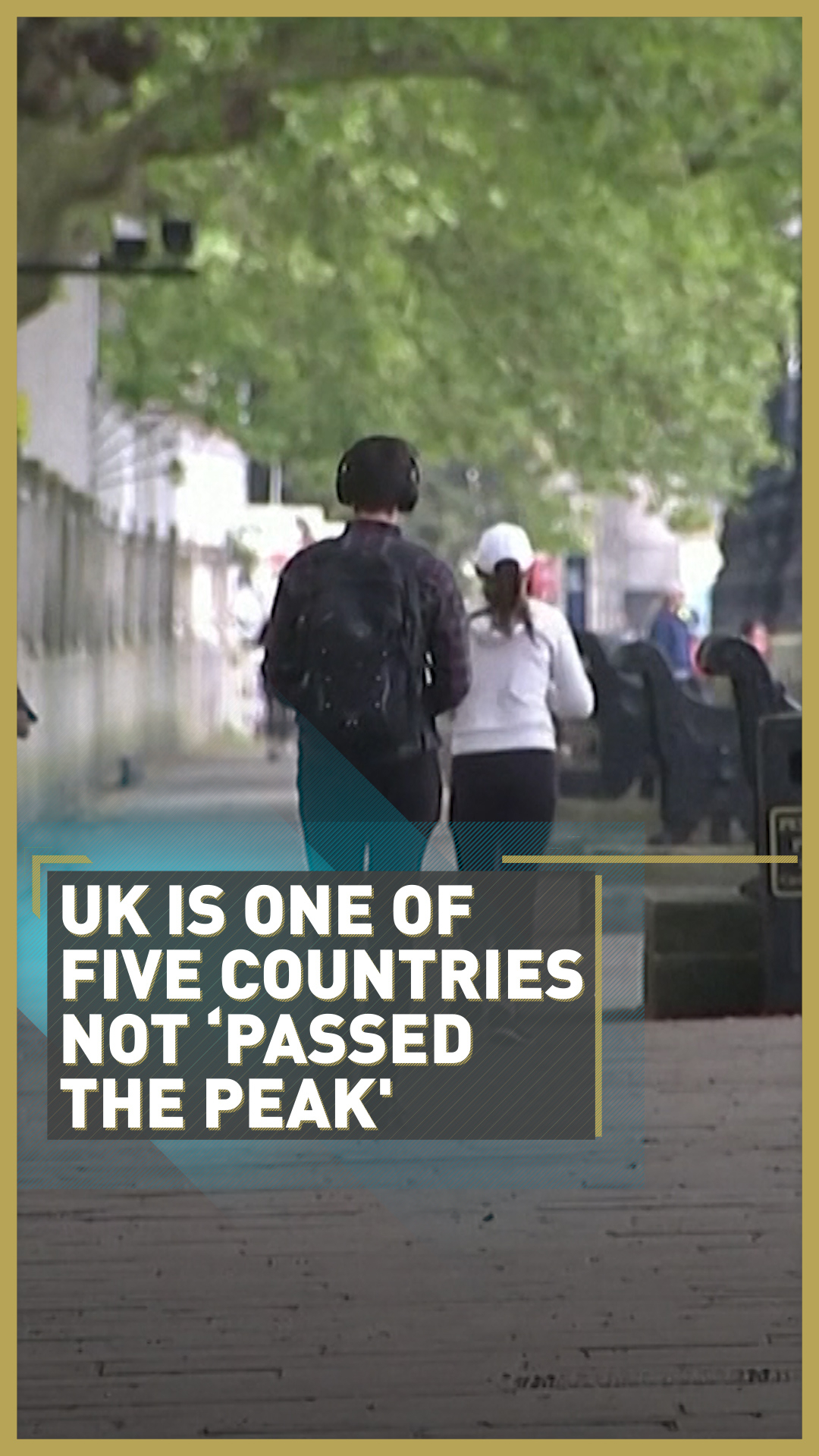 CGTN America: WHO says it has no proof from U.S on speculative Wuhan lab claims

CGTN Africa: Madagascar's COVID-19 cure gains confidence from other countries on the continent