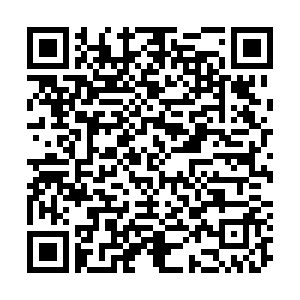 - The leader of Ireland's Sinn Fein party, Mary Lou McDonald, confirmed she has COVID-19 after testing positive for the virus on Monday. The outbreak has killed 365 people in Ireland.

- The UK death rate, standing at 12,157 after 813 new deaths recorded on Tuesday, could be 15 percent higher than official figures have indicated so far, according to broader data published that include deaths in the community such as in nursing homes. "When looking at data for England, this is 15 percent higher than the NHS numbers as they include all mentions of COVID-19 on the death certificate, including suspected COVID-19, as well as deaths in the community," Nick Stripe of the Office for National Statistics said.

- The Slovak government will unveil a plan next week to gradually ease restrictions designed to stem the spread of the outbreak, but will proceed cautiously to avoid worsening the situation, prime minister Igor Matovic said.

- The European Commission is urging European Union states to coordinate as they begin to ease lockdown measures, warning that failure to do so could result in new spikes of the coronavirus epidemic. Several EU states have announced plans or have already begun to relax restrictions imposed to contain the outbreak, as pressure grows to revive their battered economies.

- Portugal may need to nationalise its flag carrier TAP Air Portugal and other companies badly hit by the economic impact of the coronavirus outbreak, prime minister Antonio Costa said on Tuesday. TAP was partially privatised in 2015 but the state still holds a 50 percent stake.

- French president Emmanuel Macron announced on Monday evening he was extending a virtual lockdown until 11 May, adding that progress had been made but the battle not yet won. By Monday, the coronavirus had claimed 14,967 lives in France, the fourth-highest death toll in the world. Finance minister Bruno Le Maire said the economy was now expected to contract 8 percent this year instead of the 6 percent cited as recently as Thursday.

- The British government signalled that there would be no easing of lockdown measures this week. The UK death toll is the fifth-highest globally at 11,329, and a senior scientific adviser to the government has said the country risks becoming the worst-hit in Europe.

- A new report from the London School of Economics suggests that in five EU countries roughly half of all deaths are in care homes. The university examined data from Italy, Spain, France, Ireland and Belgium.

- Turkey will impose a fresh lockdown next weekend as part of measures to halt the spread of the pandemic, president Tayyip Erdogan said, after a 48-hour curfew in 31 provinces that ended at midnight.

- The European Union could finance a recovery fund worth up to $1.64 trillion with bonds guaranteed by member states, European Commission vice president Valdis Dombrovskis told German newspaper Handelsblatt. EU finance ministers last week agreed on a package of measures worth half a trillion euros to cushion the blow of the coronavirus pandemic, but left unresolved the most contentious question of how to share the financial burden. France has extended its lockdown for another month until 11 May as the country continues to deal with a growing number of fatalities from the coronavirus pandemic. President Emmanuel Macron made the announcement in a live, primetime address to the nation.

It was not unexpected news – an extension to the confinement measures had been widely accepted by the French public, especially since the Elysee Palace hinted at the move last week.

Making his fourth speech to the nation since the outbreak began in France, Emmanuel Macron admitted some failings and said the government could have acted more swiftly in dealing with the crisis.

"In the last few days, the number of people admitted into intensive care has decreased and hope is returning," he said. "Were we prepared for this crisis? Obviously not sufficiently, but we faced up to it."

He said that some schools will be able to re-open after 11 May, but only elementary and secondary institutions: universities will remain closed for the rest of the academic year, though some may open partially in the summer to allow students to sit exams.

The head of Germany's Robert Koch Institute, Lothar Wieler, said the country's latest coronavirus data showed social distancing measures in Germany are working and that the country currently has enough intensive care beds and respirators to manage the outbreak. However, he said that assumption is based on the continuing leveling-off of new cases.

At a briefing Tuesday morning, Wieler also said the death rate among confirmed cases in the country is 2.4 percent – lower than the global average – and that the average age of those with confirmed infections is 49 years old.

German chancellor Angela Merkel is set to hold a videoconference with the leaders of the country's 16 states on Wednesday to discuss loosening restrictions. On Monday, the Leopoldina Academy of Sciences, an influential government adviser, recommended that Germany gradually reopen schools, which have been closed for the past month.

By Toni Waterman in Brussels:

More than 180 ministers, CEOs and researchers have signed an open letter urging the European Union to turn the COVID-19 crisis into a catalyst for sustainable growth. Hundreds of billions of dollars in recovery funds have been pledged at both the national and bloc-wide level and the signatories would like to see the money used to "create a new prosperity model."

Coronavirus is expected to push Europe into the deepest recession since the 1930s, threatening the bloc's goal of becoming carbon neutral by 2050.

Meanwhile, lockdown exits must be coordinated and could involve measures being lifted gradually with a one-month gap between different steps, according to a European Commission proposal seen by the Financial Times. The commission has been tasked with forming an exit strategy after a hodge-podge approach to initial lockdown measures.

The four-page paper urges member states to notify each other and the commission long before they lift measures and that confinement measures remain in place for more vulnerable populations. According to the FT, the paper will be discussed among senior national officials on Tuesday.

Today marks one month since lockdown measures began in Belgium with the closure of all bars, restaurants and cafes. Officials say the country is nearing its peak, but the death toll remains high at over 300 a day. Nursing homes have been particularly hard-hit, accounting for just under half of Belgium's total coronavirus deaths. Officials say they will now begin testing all healthcare staff and residents of rest homes, deploying more than 200,000 tests.

The National Security Council will meet on Wednesday to decide whether to extend the lockdown for a second time, to 3 May. It's currently set to expire on 19 April.

Meanwhile, the month-long lockdown is causing tensions to flare. Police in Brussels face continued backlash after a 19-year-old was killed over the weekend when the scooter he was riding collided head-on with a police vehicle. Police say the driver, identified only as Adil, had fled a police checkpoint. His death has led to rioting.

Brussels secretary of state Pascal Smet said "a number of questions" need to be asked after "police control got out of hand." The police union has defended the officers. 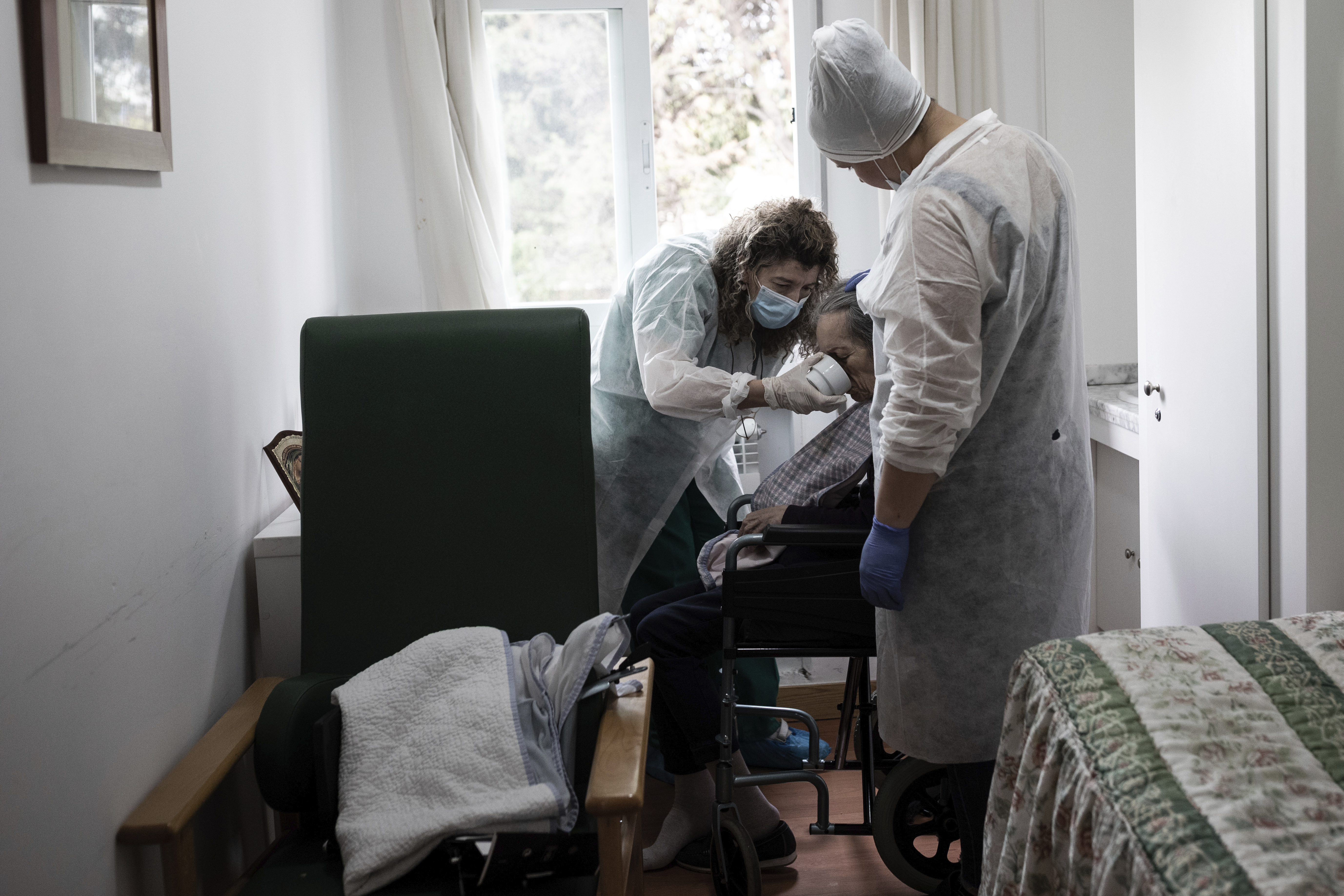 Hungary may require 7,500 to 8,000 ventilators when the pandemic peaks, but there are only 2,000 available, according to prime minister Viktor Orban.

On Monday the heads of Hungarian hospitals received a letter from the ministry of human resources instructing them to make 60 percent of publicly-funded beds available by Wednesday. This means that from a total of 60,000 beds, 36,000 must be freed up to make space for coronavirus patients.

Hospitals were instructed to transfer patients to another facility if their needs warranted it, and asked for the cooperation of families in arranging home care for patients.

As of Tuesday, Hungary had 122 deaths from COVID-19, and according to government data, the 13 who died in the past 24 hours all either suffered from an underlying health condition or were elderly.

The death toll in care homes around the UK could be five times higher than the government estimates. Currently the government's daily figures only count fatalities in hospitals; figures from care homes are expected to start being published this week. Chief medical officer Christopher Whitty said he thought coronavirus was present in 13 percent of care homes.

The government is expected to confirm on Thursday that it will extend the current lockdown for a further three weeks. There are now concerns that the 'stay at home' message has been so successful that it might be hard to encourage people to go back to work when measures are eventually relaxed: 74 percent of people in the UK prioritize limiting the infection over the economy compared with 54 percent in Germany.

After leaving hospital, Boris Johnson took a walk with his fiancée outside at his country residence at Chequers as he continues his recovery.

Guidance on the use of face masks is up for UK review as the World Health Organization reviews its own policy on protection for the public. 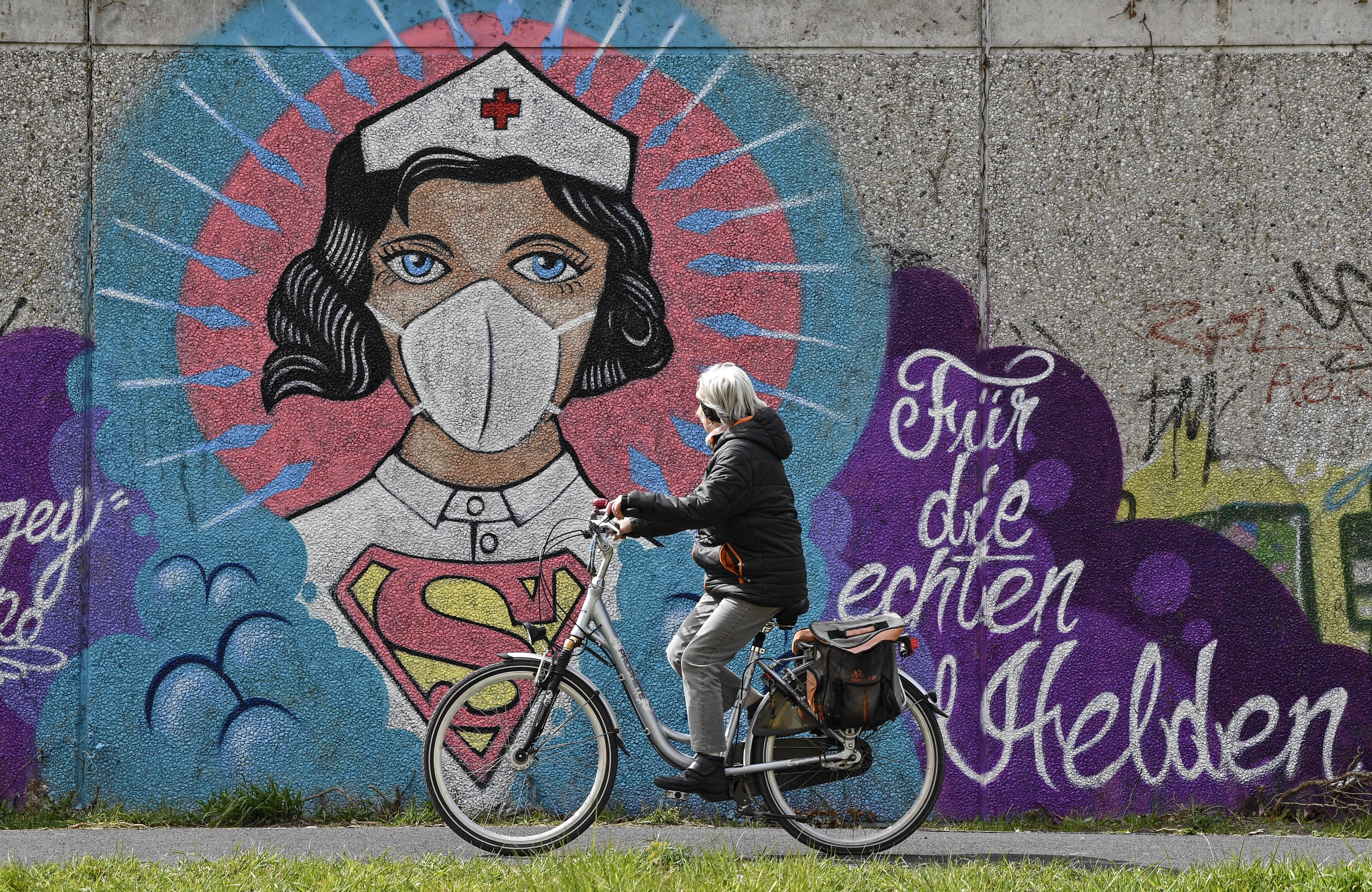 A woman on a bicycle passes a coronavirus graffiti by street artist 'Uzey' showing a nurse as Superwoman, the lettering reads "for the real heroes" on a wall in Hamm, Germany. /Martin Meissner/AP Photo

A woman on a bicycle passes a coronavirus graffiti by street artist 'Uzey' showing a nurse as Superwoman, the lettering reads "for the real heroes" on a wall in Hamm, Germany. /Martin Meissner/AP Photo