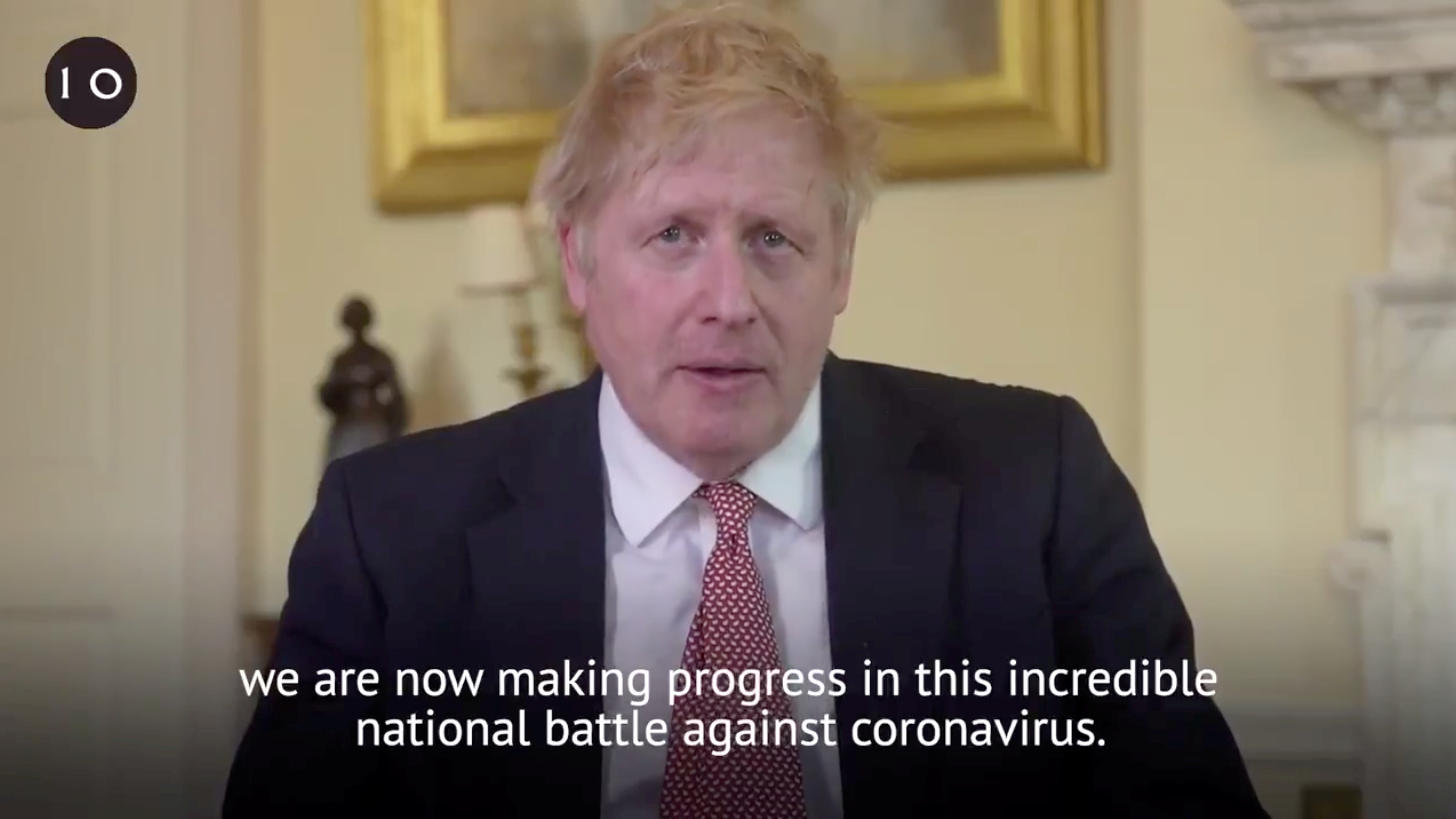 UK Prime Minister Boris Johnson has thanked NHS staff for "saving his life" after being discharged from hospital, saying "things could have gone either way" for him as he battled COVID-19.

Johnson spent several nights in intensive care with the virus and Downing Street said he would not be "immediately" returning to work.

It comes as the UK's death toll from coronavirus has passed the grim total of 10,000 deaths. After two days where the daily number of deaths was over 900, the British government announced that a further 737 people in hospital after testing positive for COVID-19 have now died, taking the overall total to 10,612.

Shortly after arriving at his country residence, Johnson posted a video on social media saying: "I have left hospital after a week in which the NHS has saved my life no question. It is hard to find words to describe my debt."

He went on to praise the efforts of the British public at social distancing, which he said was paying dividends in the battle with COVID-19.

"I want you to know that this Easter Sunday I do believe that your efforts are worth it and are daily proving their worth," said Johnson.

"Because although we mourn every day those who are taken from us in such numbers, and although the struggle is by no means over, we are now making progress in this incredible national battle against coronavirus."

He said that progress had been made because the public had formed a "human shield around the country's greatest national asset, our National Health Service." Matt Hancock said that the NHS had record amounts of equipment. Pippa Fowles/AFP

Matt Hancock said that the NHS had record amounts of equipment. Pippa Fowles/AFP

Later, Health Minister Matt Hancock told a daily press briefing that the country was responding well to the challenge facing it: "We have a record number of ventilators, 9,775, and... a record numbers of returners, over 5,000 former staff are now back on the NHS frontline and over 36,000 have come forward to enlist."

There have been claims by NHS staff that there has been a lack of personal protective equipment (PPE) but Hancock said millions of items were now being delivered to the frontline.

"There is an increasing amount of PPE and I'm glad to say that there are now record amounts in the system," he said.

"We published a comprehensive PPE plan last Friday which is based on everyone using the right PPE according to the agreed guidelines and daily we are delivering millions of items to the frontline.

"I know there have been questions about gowns, in the last two days 121,000 gowns have been delivered around the country and more are going out today." The prime minister has been one of several members of the government to have tested positive for COVID-19 - Hancock was another - and after initially self-isolating and trying to get over the virus at home, the PM was admitted to St Thomas' hospital in London on 5 April.

The prime minister said in his Twitter video that after being in hospital he understood the "pressure" that the NHS was under, and the "courage" of its workers. He thanked, in particular, the medical staff that had cared for him including "Jenny from New Zealand and Luis from Portugal."

Earlier a Downing Street spokesman said that Johnson would not be returning to work "immediately."

He said: "The PM has been discharged from hospital to continue his recovery at Chequers. On the advice of his medical team, the PM will not be immediately returning to work. He wishes to thank everybody at St Thomas' for the brilliant care he has received. All of his thoughts are with those affected by this illness."

After a day in hospital, Johnson was transferred to intensive care where he remained until last Thursday. In his absence Foreign Secretary Dominic Raab has been deputising for him.