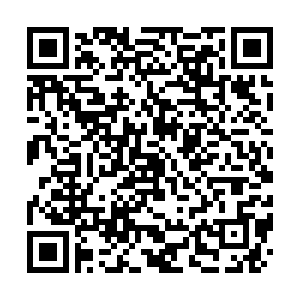 - Global coronavirus cases have passed 1.5 million, with deaths from the virus close to 90,000.

- EU governments have put pressure on the Netherlands to unblock half-a-trillion euros of economic support to fight COVID-19 ahead of a meeting of finance ministers.

- Czechia plans to roll out a 'smart quarantine' system to track and isolate contacts of people with the virus, which will eventually allow the lifting of blanket restrictions.

- Poland will extend a lockdown for businesses until 19 April. Restrictions for schools, rail and air transport will be extended for another two weeks and borders are to remain closed until 3 May.

- Finland confirmed it will extend by a month (until 13 May) most of the restrictions imposed to contain the coronavirus.

- The WHO is to launch an appeal for more than $1 billion to fund operations against the pandemic through year-end, diplomats told Reuters.

- France says the national lockdown to contain the virus will be extended further, beyond 15 April. This comes as the hospital death rate in France has slowed again.

- The UN Security Council will meet on Thursday to discuss the coronavirus pandemic for the first time.

The Swiss government has extended its coronavirus lockdown measures until 26 April. The government added that it plans to ease some measures already in place at the end of the month. These include border controls, restaurant closures and bans on gatherings of more than five people.

Officials say the COVID-19 pandemic has spread widely in Switzerland but the speed at which it is spreading has slowed significantly in recent days.

According to the government, Switzerland could suffer its worst economic downturn on record. The economy could shrink by as much as 10.4 percent this year if there were to be a prolonged shutdown in the country as well as abroad.

Economic affairs minister, Guy Parmelin, said nearly a third of the country's workforce was on short-time work and unemployed numbers were on the rise. 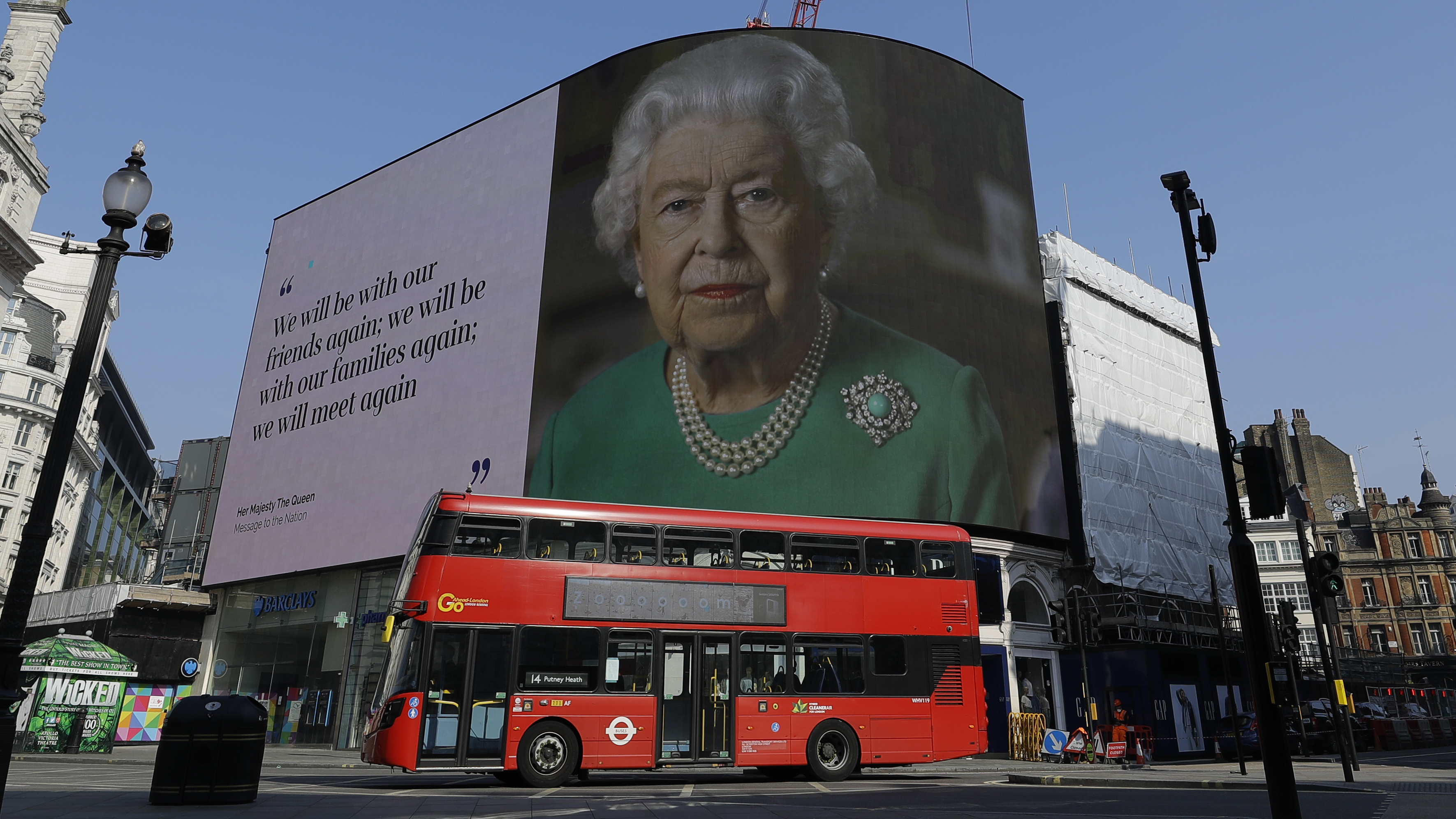 A gigantic image of the Queen delivering her address to the nation has been displayed on London's famous Piccadilly Lights alongside a message of hope from the monarch. /Kirsty Wigglesworth/AP Photo

A gigantic image of the Queen delivering her address to the nation has been displayed on London's famous Piccadilly Lights alongside a message of hope from the monarch. /Kirsty Wigglesworth/AP Photo

Ministers will today discuss the possible extension of lockdown measures in the UK. The government's emergency Cobra committee will look at evidence from scientists on the impact of measures brought in on 23 March for a provisional three-week period.

There is little expectation that measures will be lifted and the foreign secretary, Dominic Raab, deputizing for Prime Minister Boris Johnson, is likely to comment on this in tonight's Downing Street briefing.

Johnson, begins his fifth day in hospital. He is still described as stable, but Downing Street said he is engaging with hospital staff and in good spirits. There is still no formal arrangement for handing over prime ministerial power in the event of extended incapacitation.

The government here in France has confirmed that the current lockdown measures will be extended beyond 15 April.

The country is still suffering rising numbers of cases and fatalities and health experts are recommending an extension until the end of the month, although the cabinet has not released specific extension dates yet.

President Emmanuel Macron was due to make his fourth address to the nation since the coronavirus outbreak began later on Thursday, but that has now been delayed until Monday 13 April.

The Élysée Palace says that by pushing back the address, the government is allowing more time to consult public and private actors, as well as French, European and international bodies in order to exchange information and discuss major issues related to COVID-19. 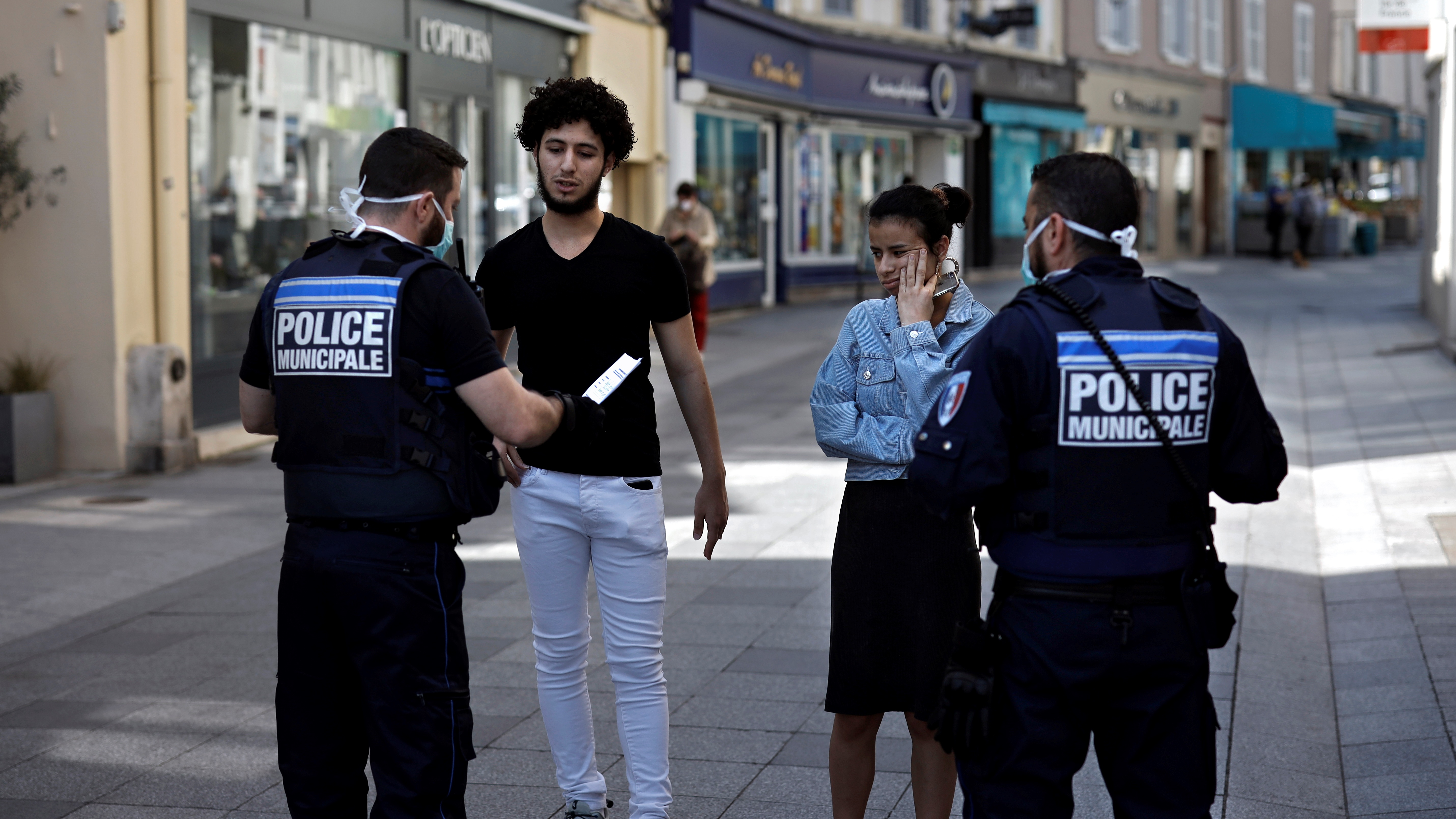 It has emerged that authorities in Madrid may have seriously underestimated the number of people who have died due to the coronavirus.

This comes after they admitted that only people who were tested for COVID-19 were included in Spain's final death toll.

Nearly 3,500 people died last month inside various residential homes in Madrid, many of whom had been showing symptoms of the virus. However, they were never counted as official victims of COVID-19, according to the region's deputy prime minister.

In previous years, the number of people who have died in Madrid care homes during the month of March has averaged around 1,000. 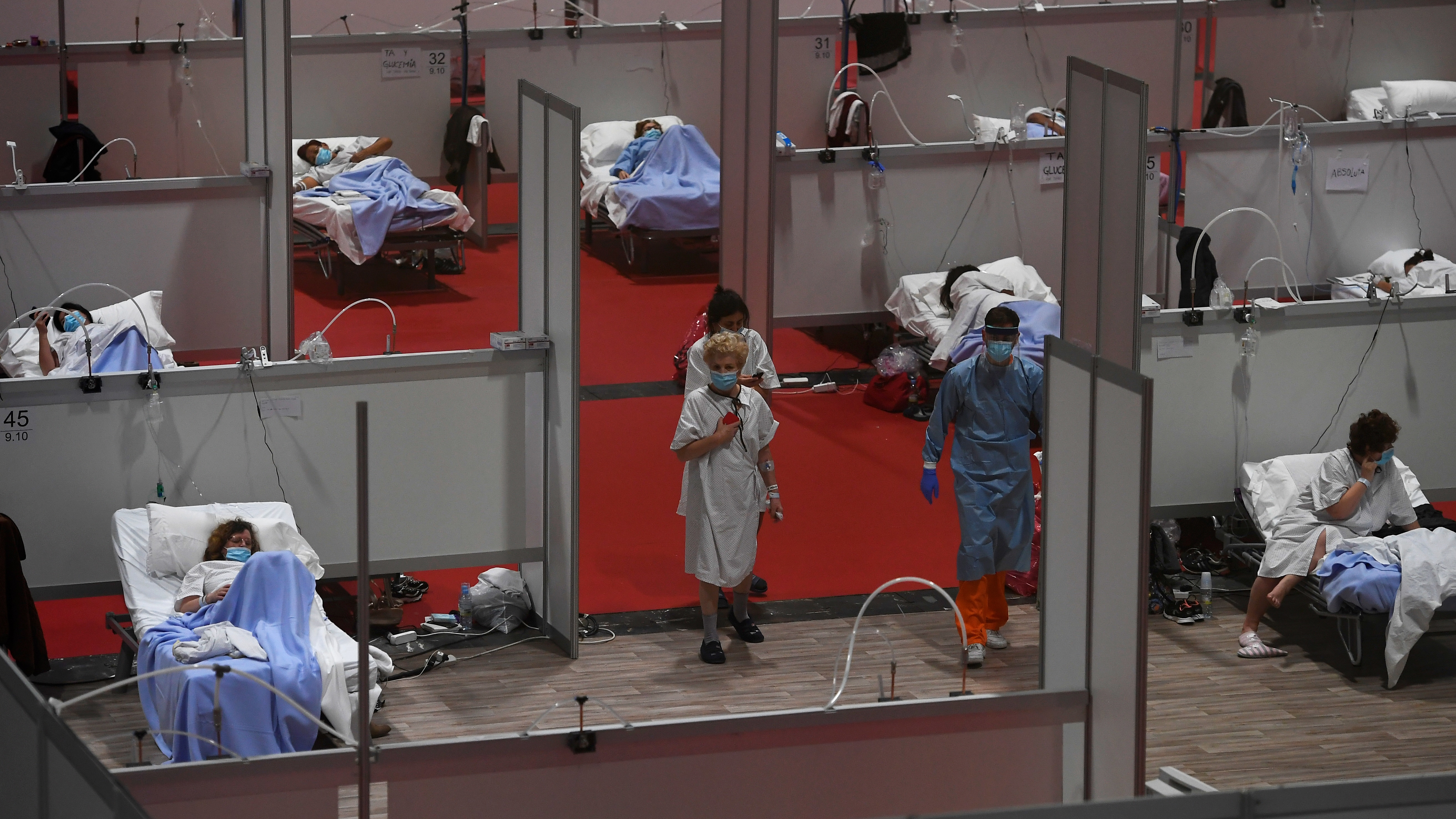 The death toll from the coronavirus continues to rise in Spain, while questions are raised about its veracity. /Pierre-Philippe Marcou/AFP

The death toll from the coronavirus continues to rise in Spain, while questions are raised about its veracity. /Pierre-Philippe Marcou/AFP

The stakes are higher than ever as European Finance Ministers head into another grueling set of talks to thrash out a $540 billion coronavirus support package. Reaching a deal has now become a test of European survival.

In an interview with the German newspaper Bild, Italian Prime Minister Giuseppe Conte said if fiscal rules aren't loosened, "we have to write off Europe and everyone does their own thing."

More than 220 prominent European intellectuals, artists and politicians have warned of "chaos and authoritarianism" if a deal can't be reached. "There is another patient at risk of death – European values," they said in an open letter to Brussels.

Disagreements between Italy and the Netherlands over bailout fund conditions and divisions between European finance ministers over joint debt, threaten to delay the much-needed recovery package, but ministers hope to reach an accord before Easter.

A new study out of the University of Ghent shows the motivation to adhere to anti-coronavirus measures is waning, particularly among the young and old.

When the lockdown measures came into force, 81 percent of respondents said they were voluntarily motivated to follow the rules. That number has now dropped to 76 percent. More than 10,000 people responded to the questionnaire. Maarten Vansteenkiste from UGent said the long duration of the lockdown is partially to blame, as is peer pressure to obey the measures.

Another study out of Belgium shows that up to 30.8 percent of the country's small- and medium-sized businesses may not survive the pandemic. Belgian lender Belfius says that more than 20 percent of SMEs were tight on cash before the country went into lockdown four weeks ago. The government is trying to keep them afloat with tens of millions of dollars in support.