"We almost agreed but not quite yet. So it's a good message for now."

That's Olaf Scholz, Germany's finance minister, speaking after a marathon meeting of the Eurogroup (the finance ministers from the countries that use the euro), which did not end up solving COVID-19 economic issues.

We also learned today that both France and Germany have entered recession. After a narrow 0.1 percent fall in the final quarter of 2019, the French economy dropped 6 percent in the first three months of 2020. German GDP is expected to drop almost 10 percent, which for that economy is a huge fall – the biggest since modern records began, in fact. It's already down nearly 2 percent, though researchers do think it should recover quickly.

European stocks also ended their brief recovery, to dip again on Wednesday. The FTSE 100 and EuroStox both fell, but it was the French CAC 40 and Spanish IBEX that led the drop, declining by 2.2 percent and 1.8 percent, respectively.

In other news, Jack Dorsey the Twitter CEO, said he has donated $1 billion, or 28 percent of his wealth, to assist COVID-19 medical efforts in the U.S..

For more on the Eurogroup's non-decision, do watch our correspondent Toni Waterman's report from the European capital.

And our graphic today is on house prices. Which European Union member state had the biggest year-on-year growth in 2019? Scroll down to find out.

France has officially fallen into recession, after GDP declined for two quarters in a row. It's the country's worst performance since 1945.

And Germany is expected to join its neighbor in recession, with leading economic think tanks predicting a near-10 percent drop over the next year, as the true weight of the coronavirus is felt.

Portugal will extend its credit lines for businesses struggling amid the COVID-19 pandemic to $4.5 billion on Wednesday, the government announced, after a European Commission state aid package eased the country's finances.

Tesco, the UK's biggest retailer, says its extra measures taken to combat COVID-19 and the nationwide drop in purchasing could cost it $1 billion. The firm has hired at least 45,000 new staff since the pandemic hit the UK, mainly to cover sick leave and to cope with new cleaning and social distancing requirements.

Iran's president Hassan Rouhani pressed the International Monetary Fund harder for a $5 billion emergency loan. Iran has sought the funding to fight the Middle East's worst coronavirus outbreak, saying the IMF would be guilty of discrimination if it withholds the money.

Supertanker freight rates have fallen after last week's highs as industry participants await the outcome of a meeting of oil producers on Thursday before making further bookings, industry sources told Reuters. At the same time, the per barrel price of oil seems to have steadied at around $32, while traders also watch the OPEC meeting for progress.

The European Union is to pursue a bloc-wide approach to tracking COVID-19 with mobile apps, according to a paper seen by Reuters. It warned "a fragmented and uncoordinated approach risks hampering the effectiveness of measures," according to the news agency.

The British Chambers of Commerce said only 1 percent of UK firms have successfully applied for the government scheme to help firms with emergency coronavirus funds. The BCC said 16 percent of companies had less than a month's worth of cash reserves, without the funding.

Japanese car maker Nissan said its sales in China, where it has a partnership with Hubei-based Dongfeng Motor, dropped 44.9 percent in March, compared with the same time in 2019. It sold 73,297 cars in the world's largest market.

EasyJet founder Stelios Haji-Ioannou continued his battle to force the budget airline to cancel an order for 107 Airbus planes, making a new demand on Wednesday for a shareholder vote and threatening to sue the airline's directors.

Easter is the new deadline for the EU's finance ministers to break a stalemate over how to finance the bloc's coronavirus recovery plan. The Eurogroup spent 16 grueling hours trying to reach a consensus before throwing in the towel and suspending the meeting until Thursday. Toni Waterman reports from Brussels. 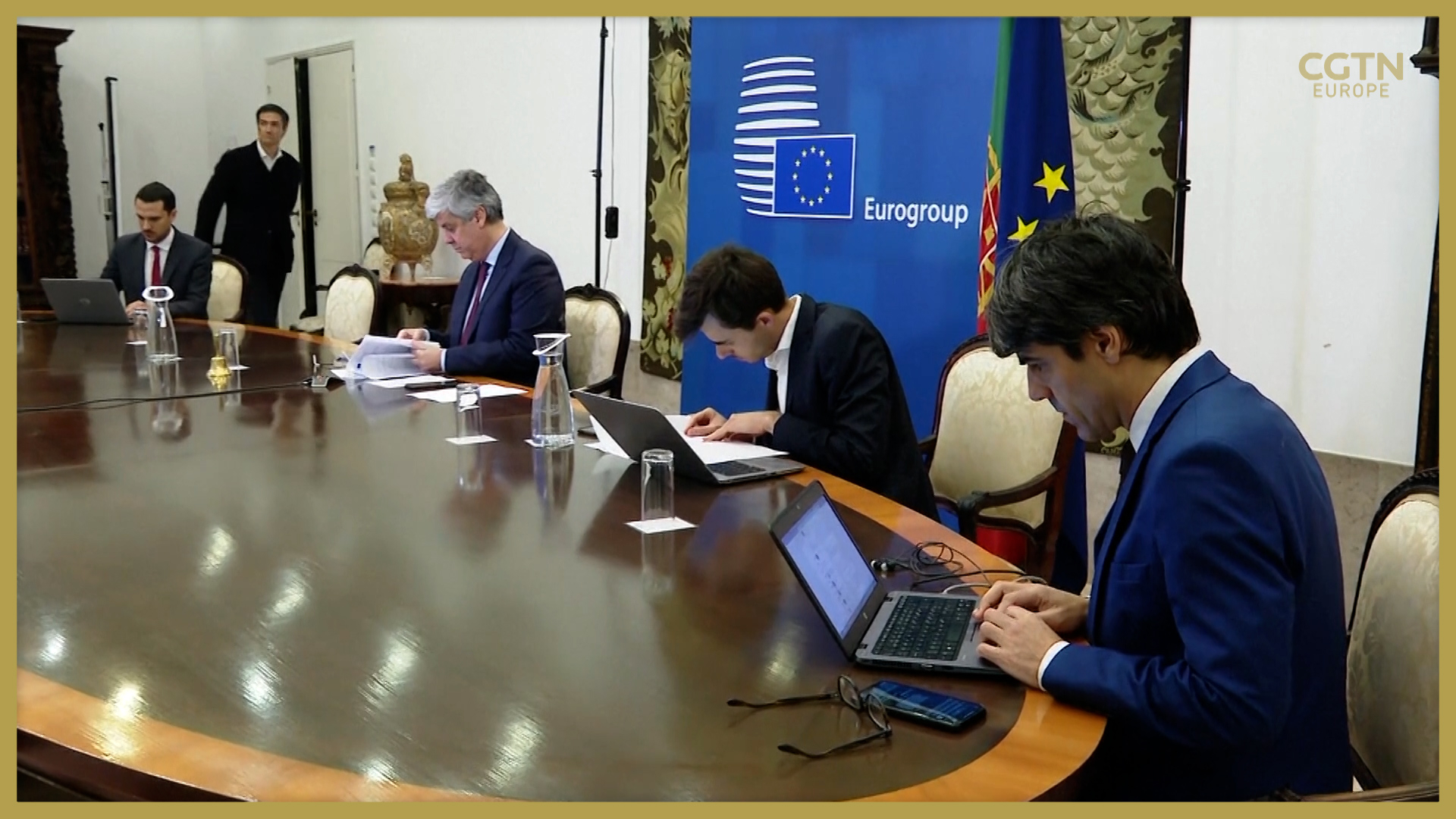 Richard Hyman is an independent retail market analyst. He spoke to CGTN Europe about the news that Tesco may lose $1billion and what has caused it.

Tesco has warned that it could take a hit up of up to $1.1 billion due to coronavirus. Where are the key losses coming from?

I think the key increase in costs is around people. Tesco has said that they have around 55,000 people who, for one reason or another, are unable to work right now. And so far, they've recruited about 45,000 people to replace them. They employ well over 300,000 people. But that's still a very big number and is completely unforeseen... increasing costs.

Tesco has taken the controversial decision to resume dividend payments to its shareholders. Why now?

I think now the question of the dividend is a difficult one. I think that, you know, on the one hand, Tesco has said quite rightly that these results and the dividend that's attached to them is attributable to the year ended February, which is largely before the virus kicked in. It it's also true that dividend payments do more than just land up in the pockets of already very rich people.

We all pay money into our pension pots. We have ISAs and various other investments. And the dividend will be a benefit to a large number of ordinary people. However, on the flip side, I do think that the situation we're in, most of the public will probably not see it like that. And there was the opportunity for Tesco to do something about the dividend. And they've chosen not to. So I think a bit of controversy around that is inevitable.

But the fact that they're paying the dividend when they hadn't paid it for the last two or three years is quite surprising, isn't it?

I think that they are very keen to reward the shareholders that have stuck with them during what has been a recovery period since 2016. And they want to reward their loyalty.

And whether they should have done, given the circumstances and given the fact that, you know ... we're now in a new trading year for tests. And the key point of that new trading year is the virus and the implications of it. It's a very moot point whether that was a good idea.

What government policies are in place to support supermarkets if food security does become a problem?

Well, I think most of the government's initiatives are really initiatives for the wider economy. They're not specific to retail. I think food retailers have done an outstanding job actually and deserve a lot of plaudits. [Given] the totally unforeseen circumstances that we're in and the implications of that.

The initial knee-jerk stockpiling and panic buying and the strains that put on the entire food distribution system right the way through from the supply chain all the way through to the shop floor. I think they've handled it very, very well. And I think that the learning from the first few weeks will stand the industry in very good stead over the coming weeks as the virus hopefully peaks and then subsides.

All supermarkets say they're working on widening online delivery capabilities, but how much change can realistically be expected?

Well, the statement from Tesco today really shines a light on a number of things. I think a lot of people thought the food retailers were going to be coining it in in these circumstances. And what they've done is to show that actually there are massive costs and that you can't just 'magic up' massively increased online capacity.

The reality is that before the coronavirus kicked in, around 7 percent of UK food retail spend went online. In other words, 97 percent went through stores. There's clearly going to be an uplift in that.

They're all busting a gut to increase this capacity, but it can't be done on a massive scale very quickly. It takes years of building an investment in expanded infrastructure. I think when all this is done, it will still be below 10 percent.