How have China's COVID-19 lockdown measures differed from those in Europe?
Arij Limam

With more than 1.3 million confirmed cases of COVID-19 around the world, every continent has now felt the effects of the virus in some way.

Life for hundreds of millions of people has drastically changed since the outbreak of the coronavirus, with countries across Europe and the world under lockdown and the movement of people severely restricted.

However, residents of Wuhan – the city in China's Hubei province and the epicenter of the disease in the country – are slowly returning to normal life as their lockdown lifts on 8 April.

China reported no new coronavirus deaths in the country today for the first time since the pandemic began, and a drop in new cases. The confirmed number of cases to date stands at 82,718 and total deaths at 3,335.

In terms of deaths, Italy has the highest recorded number globally at 16,523 – almost five times the number in China.

Comparisons cannot be made between countries to determine why cases and death rates may be different, as not enough is known yet about COVID-19 and each country has several different variables.

But as more countries find that lockdowns are effective in reducing the spread of the virus, how have these measures differed between countries since the outbreak began? 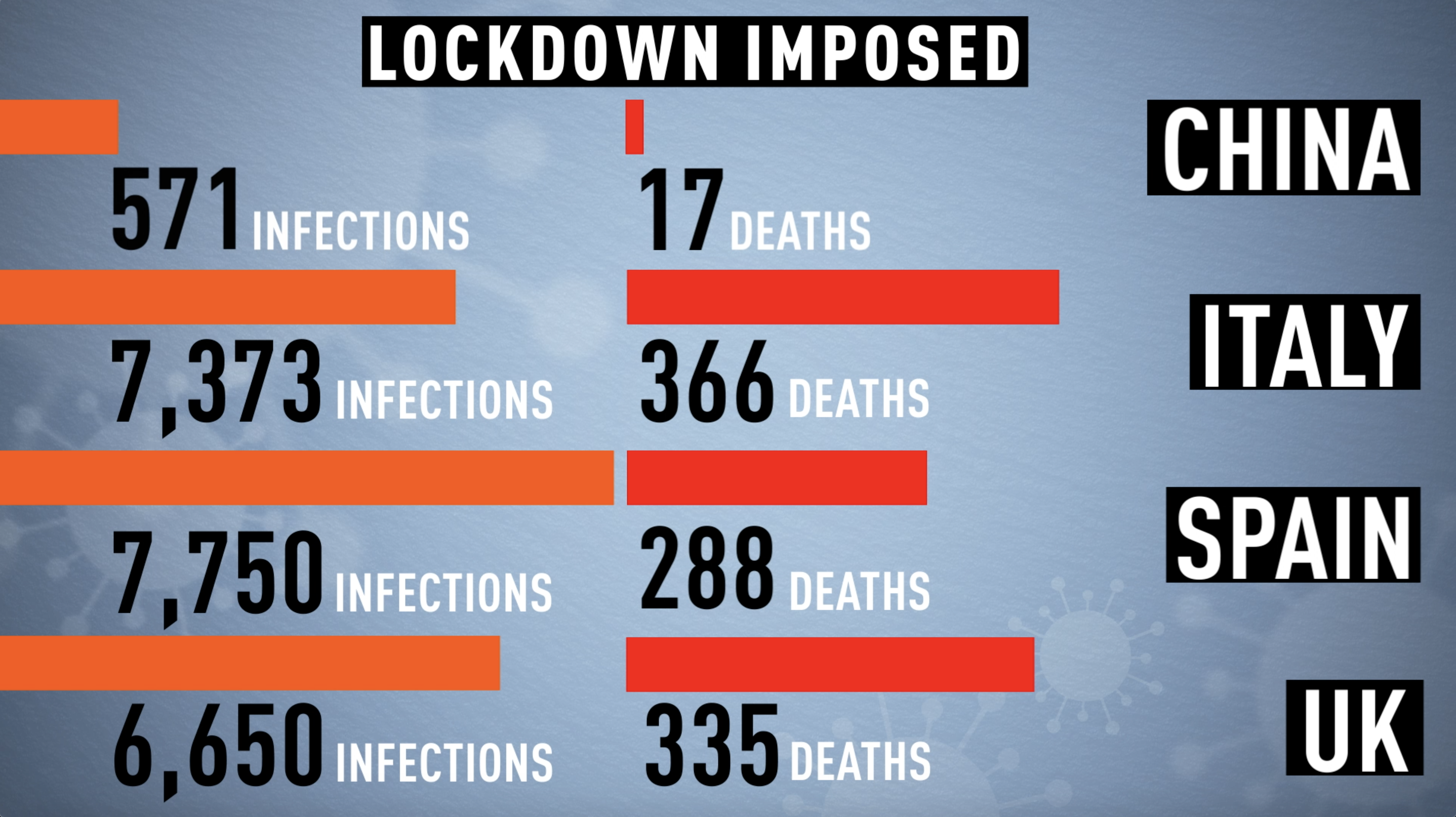 Countries imposed lockdowns at different times throughout the crisis. /CGTN

Countries imposed lockdowns at different times throughout the crisis. /CGTN

When were lockdowns imposed?

When China implemented stringent quarantine measures to curb the spread of the virus, it was the largest lockdown in human history. The unprecedented move, which stunned the world, drew praise from health bodies including the World Health Organization, which said: "China's bold approach to contain the rapid spread of this new respiratory pathogen has changed the course of a rapidly escalating and deadly epidemic."

The city of Wuhan, which has a population of just over 11 million people, was put under complete lockdown on 23 January, after 17 deaths were reported and 571 cases confirmed.

Figures from Worldometer show that new daily cases reported began to decline noticeably on 14 February, 23 days after the lockdown came into effect, with the death rate fluctuating until 24 February – one month into the lockdown – when it consistently declined.

Now, more than two months after these restrictions were put in place, no new deaths have been reported in Wuhan and the number of cases continues to drop. To date, the city has recorded 50,008 confirmed coronavirus cases and 2,571 deaths.

Italy, which currently has the highest death toll from the coronavirus in the world, imposed quarantine measures in its worst-hit northern region on 8 March after fatalities reached 366 and confirmed cases hit 7,373. A nationwide lockdown was imposed across Italy the following day.

The region of Lombardy, which has a population of more than 10 million, accounts for the largest percentage of cases and deaths in the country. To date, 8,656 people have died in the region and confirmed cases have reached 50,000.

Now, almost one month after these strict measures were implemented, the number of cases per day has remained within a range of 4,000 to 4,800, much lower than the 6,557 peak on 21 March, confirming government hopes that the epidemic has hit a plateau and is expected to decline in the near future.

The daily death toll has also been declining for consecutive days, reaching 525 in one day, down from the peak of 919 on 27 March – the deadliest day of the virus in Italy. 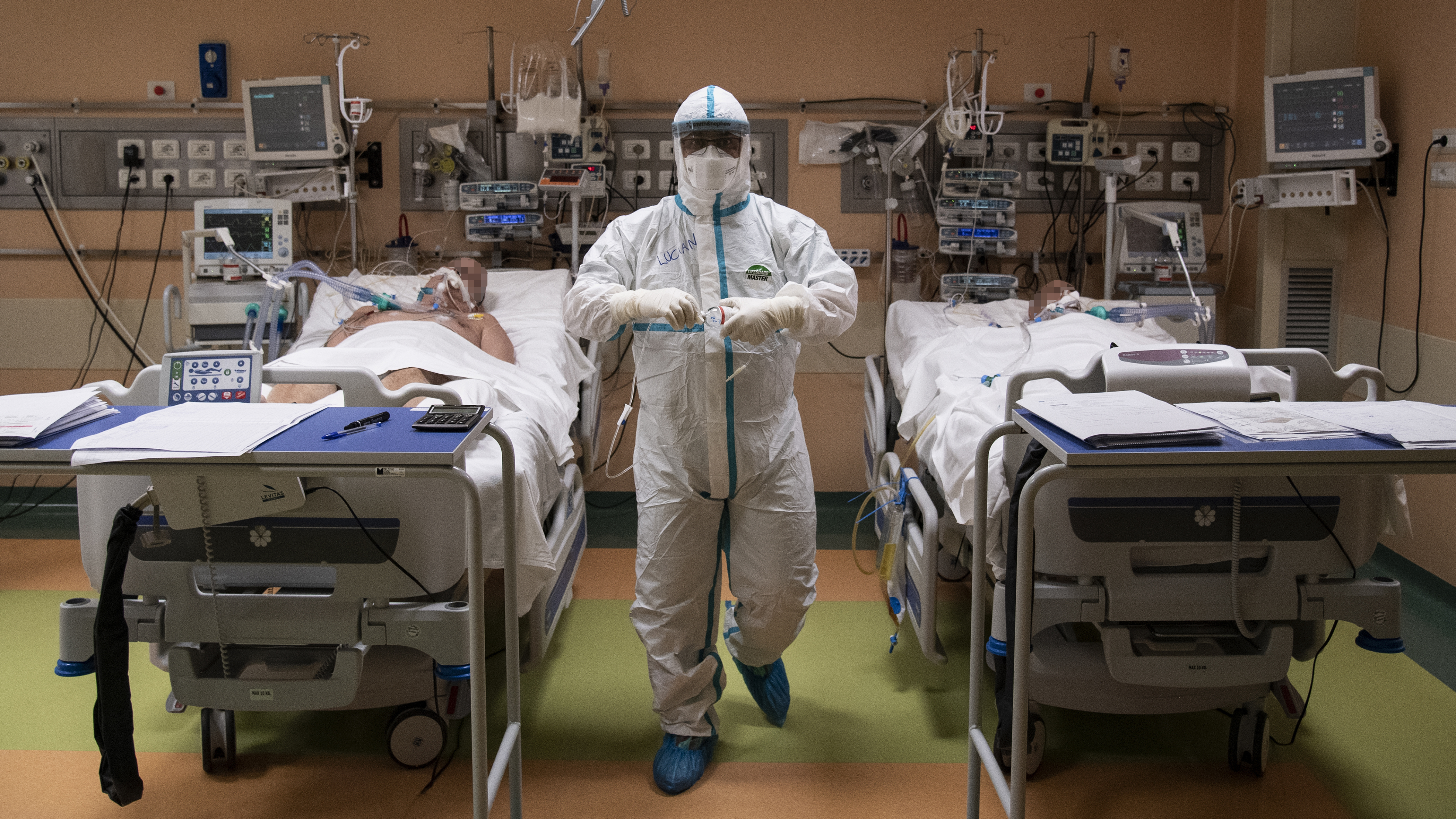 Italy has the highest death toll from the virus so far. /Marco Bertorello/AFP

Italy has the highest death toll from the virus so far. /Marco Bertorello/AFP

Spain's national lockdown came into full effect on 15 March – after several travel restrictions were put in place earlier – when the confirmed cases stood at 7,750 and deaths at 288.

On 14 March, the number of cases had reached 5,753, and the death toll stood at 136, according to the Spanish health ministry. The majority of these cases were reported in the capital, Madrid, which has a population of just fewer than 7 million people.

It was only one day earlier, on 13 March, that the World Health Organization declared Europe the epicenter of the virus.

But 24 days into the lockdown measures, infection and death rates are beginning to fall. On Monday, the daily death toll of 637 was the lowest recorded so far in almost two weeks since the peak. New cases were also showing a consecutive daily decline from 2 April.

The UK strayed from the rest of Europe by not imposing tough lockdown measures during the first two weeks of March.

A nationwide lockdown across the country was imposed more than two weeks ago, on 23 March, when the death toll increased to 335 and the number of confirmed cases stood at 6,650, according to the UK's department of health.

Britain's capital, London, which has a population of around 9 million, has the highest recorded number of cases and deaths in the country – at 12,636 and 1,482, respectively.

Cases and deaths across the UK continue to increase, with the death toll today standing at 6,159, after 758 people died yesterday in England alone on the deadliest day of the virus so far.

China was the first country to implement stringent lockdown measures following the outbreak of the coronavirus in the country.

The lockdown of Wuhan was considered more extreme than elsewhere, due to it being the possible origin of the virus.

Public transport around the entire city including buses, railways, flights and ferry services were suspended and Wuhan's main airport and railway station and the Wuhan Metro were all closed. Major highways were also shut down to stop residents driving in or out of the city. Private cars were also barred from roads in most circumstances.

Residents and all government workers were required to wear face masks while in public spaces. Residential blocks banned visits from those who weren't inhabitants, with authorities or carers helping the vulnerable. Authorities also conducted house searches for potentially infected individuals.

When the outbreak was at its peak, tougher measures were implemented including only a single person from each household being allowed to leave the building every three days to buy food and essential items.

Italians were ordered to stay at home and seek permission for essential travel. Public gatherings were forbidden and bars, clubs, restaurants and shops were all closed, with only pharmacies, banks, post offices and essential supermarkets remaining open. Police squads in Rome checked documents of those outside and issued fines to those without an acceptable reason for being there.

Travel bans were also imposed, with the government allowing only those with valid work or family reasons that could not be delayed to travel by air. Travel across municipalities other than for business or health matters were also banned.

Controls were placed at train stations to check temperatures of passengers and cruise ships were forbidden to dock at certain ports.

Spain followed Italy's example with lockdown measures, as all but essential trips outside the house for Spanish residents were banned. Businesses and companies not providing key services during the crisis, such as supermarkets, pharmacies, IT and communication vendors and banking services were also forced to shut down, as were schools.

Non-essential workers were told to stay at home and employees still at work were asked to work from home to avoid unnecessary travel.

A wide range of companies also suspended their workers' jobs in activities that had to close due to the declaration of the state of alarm in the country.

Britons were only allowed out to shop for basic necessities, exercise once daily, for a medical need, to provide care or to travel to work where absolutely necessary.

Employees not considered key workers were told to work from home where possible and avoid using public transport unless absolutely necessary. Though some are limited, transport services continue to run in the country.

The British government also said fines may be issued to those not complying with the lockdown.