- Spain’s COVID-19 death toll surpasses China's, becoming the second highest in the world. The country records its biggest daily increase in deaths, rising by 738 in the last 24 hours to a total of 3,434.

- The number of new cases in Italy fell for the second day in a row yesterday, raising hopes that the strict lockdown enforced two weeks ago is working. Italy is the worst-affected country in the world.

- Italy increases its punishments for breaking restrictions including fines of thousands of euros and five-year prison terms for those who test positive for COVID-19 and break quarantine.

- Poland’s government considers expanding restrictions including a limit on the number of people taking part in masses, a drastic move in a deeply devout Catholic country.

- The number of people in France who have died from coronavirus is much higher than the official daily government tally, says the head of the hospitals federation.

- The Vatican is under pressure to let more employees work from home as its offices remain open two weeks after the Italian government ordered its lockdown.

- The 160-year-old Vatican daily newspaper L'Osservatore Romano has suspended printing for only the third time in its history.

- Nurses and doctors demand action after Spain reported its sharpest daily increase in coronavirus cases and said about 14 percent of the nearly 40,000 infections were among health workers.

- Russian authorities acknowledge that a low number of coronavirus cases in the country could be a result of insufficient screening and warned the nation must brace for the worst.

- Germany's parliament is meeting to approve an aid package totaling more than $1.1 trillion.

- A Thai charity is live-streaming its elephant herd bathing in a river to give viewers respite from the deluge of unnerving news about the COVID-19 crisis.

- More than 250,000 people have signed up to help Britain's National Health Service tackle the coronavirus outbreak after a request for a quarter of a million volunteers. 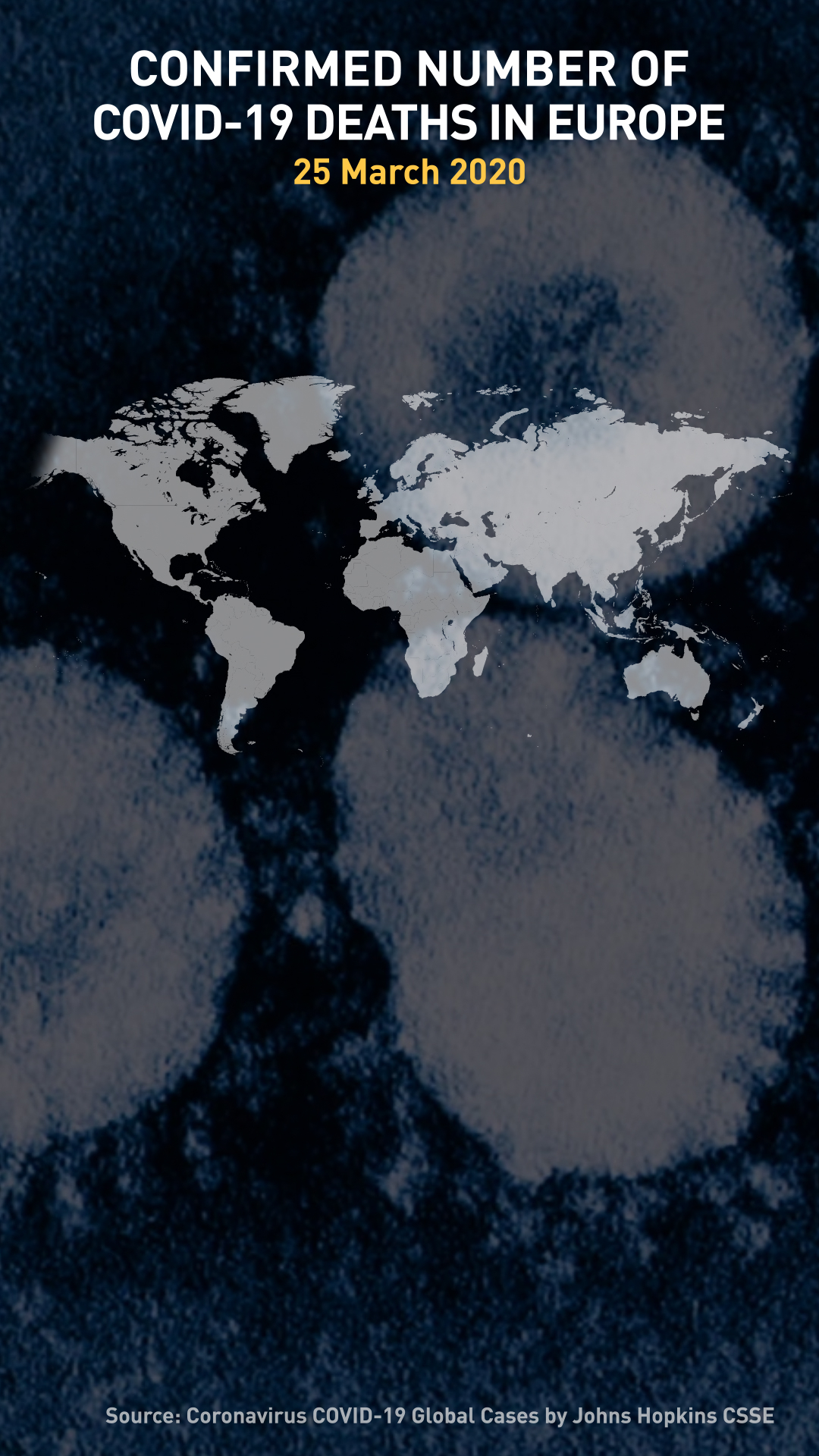 Germany has 32,991 confirmed coronavirus cases and 159 deaths, according to Johns Hopkins University at 9:30 GMT on Wednesday.

Germany's parliament, the Bundestag, is set to approve an $814 billion aid package on Wednesday to counter the economic damage from coronavirus. Only a third of Germany's 709 members of parliament attended the session in order to maintain the required social distance of 1.5 meters.

The package includes direct subsidies for small businesses and self-employed people who have been affected by the crisis, as well as credit assistance and other measures to assist larger firms. The government will borrow $169 billion to help finance the measures, the first time it's taken on new debt since 2013.

Vice Chancellor Olaf Scholz took Angela Merkel's place at the session, with the chancellor still in home quarantine because of possible coronavirus exposure from her doctor. So far, Merkel has tested negative for the virus. The French authorities are using loudspeakers and cameras mounted on drones to monitor the lockdown across the country. This comes ahead of a cabinet meeting on Wednesday at which it is expected the nationwide quarantine period will be extended.

The strict confinement measures were originally planned to expire on 31 March, but there is a feeling within the government that this needs to be extended. The prime minister, Edouard Philippe, hinted at an extension earlier in the week during an interview with French television.

The scientific council he set up here in France has also recommended pushing the date back, saying the lockdown conditions should last until the end of April.

A few days ago, Prime Minister Pedro Sanchez warned of "tough days ahead."

For Spain, there's the sense that we are right in the middle of those tough days after it became the second worst-affected country in the world – recording its biggest daily increase in deaths on Wednesday, 738 to a total of 3,434.

Also, the risks Spain's healthcare workers face on a daily basis as they try to treat the public were brought into sharp focus with the news that more than 5,000 of them have now contracted COVID-19.

The country's leading healthcare expert, Fernando Simon said this was the week when Spain would find out if the national lockdown, in force since Monday the 16 March, was having the desired effect.

So far, about 250,000 people have signed up as volunteer workers to help support the vulnerable across the country. People are making themselves available to deliver food and medicines, drive patients to appointments and help with phone lines.

This is in response to an appeal from the health secretary, Matt Hancock, that also included plans to bring nearly 12,000 retired NHS staff back to work.

Parliament will close on Wednesday until 21 April. It's a week earlier than the usual Easter break but leaves enough time for MPs to approve new extraordinary powers for the government including detaining people resisting new social-distancing measures.

As France, Spain, and Ireland follow Italy with draconian lockdown measures, the UK is still being seen as behind the response curve. NHS emergency staff are appealing directly to the public to stay at home while voicing increasing concerns that they lack the appropriate personal protection equipment to do their jobs safely.

Serbia has imposed much harsher measures against the COVID-19 outbreak. The latest in the string of restrictions includes turning the largest hall in the Belgrade Fair into a makeshift hospital with 3,000 beds.

Only those with mild symptoms will be taken there. Awaiting for the epidemic to peak in the next couple of weeks, under the guidance of the Chinese experts, Serbia is trying to avoid a situation similar to that of Italy.

On Wednesday, Serbia confirmed 384 cases, 81 more than just a day ago. So far, four people have succumbed to the illness.

Switzerland's health authorities have confirmed nearly 9,000 coronavirus infections but said it was premature to say the number of new cases was flattening out. The new cases rose by fewer than 1,000 since Monday, which is less steep compared with recent days. But the authorities say a few more days are required to speak of a consolidation of numbers or a trend.

Switzerland has expanded the number of tests it conducts daily to around 8,000. So far, around 80,000 people have been tested since the crisis began.

People in Switzerland have been coming together every evening at 21:00 on their balconies to cheer for the health workers on the front line of the fight against coronavirus. And in a sign of solidarity with all the people who are suffering, Zermatt, an Alpine village at an elevation of around 1,600 meters which lies below the iconic, pyramid-shaped Matterhorn peak, has started illuminating a light projection on the mountain that reads "HOPE."  This will take place every evening until 19 April and can be watched via webcams. 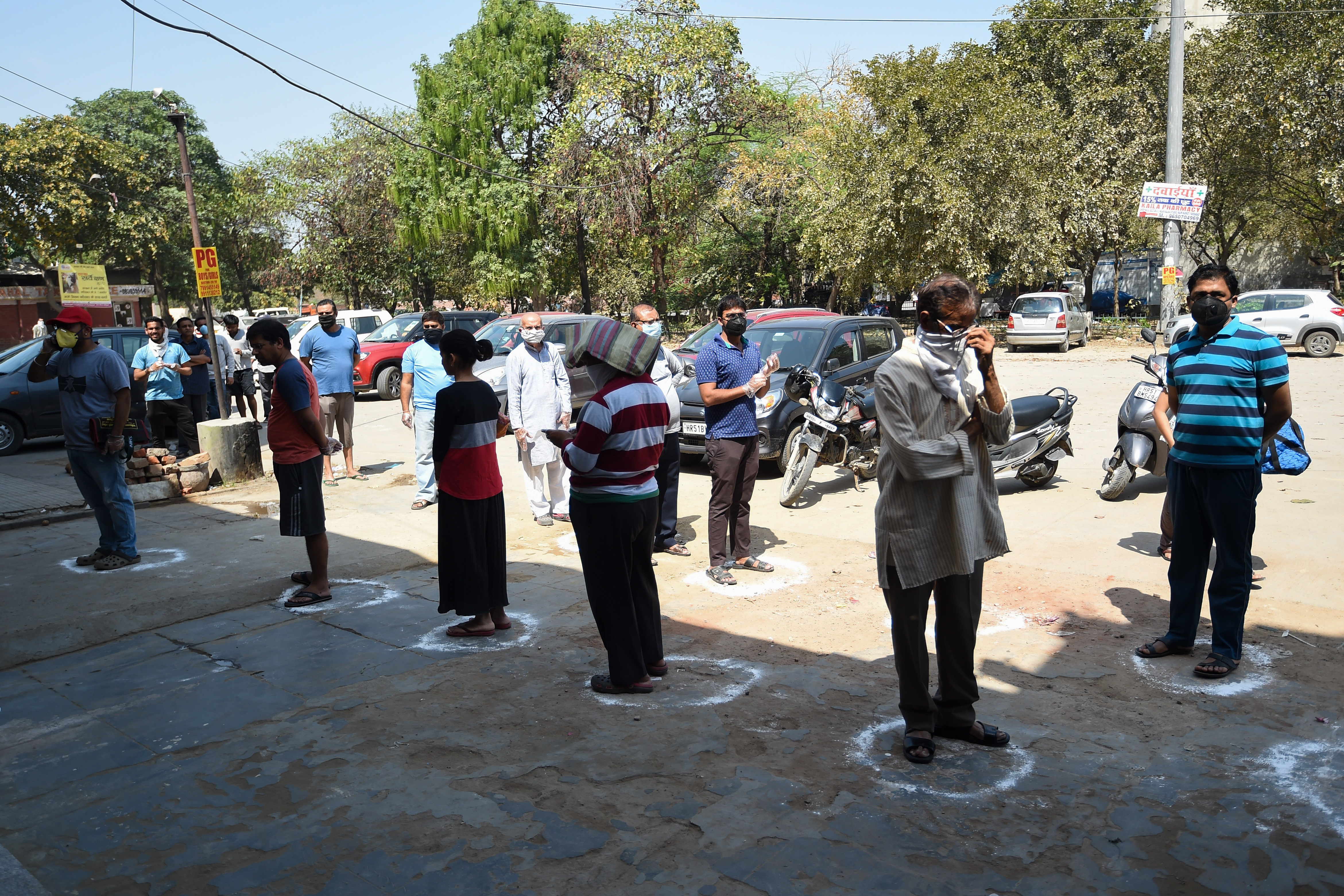 People stand on designated areas to maintain social distancing in Faridabad in the state of Haryana, India. /Money Sharma /AFP

People stand on designated areas to maintain social distancing in Faridabad in the state of Haryana, India. /Money Sharma /AFP

- Dow soars over 11% in strongest one-day performance since 1933

- China to implement 2.5-day weekend to boost consumption after COVID-19