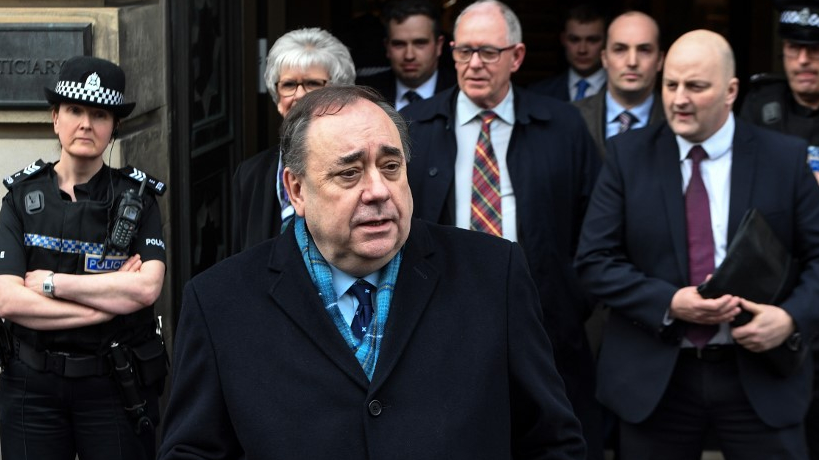 Alex Salmond was cleared of all charges at the High Court in Edinburgh. Andy Buchanan/AFP

Alex Salmond was cleared of all charges at the High Court in Edinburgh. Andy Buchanan/AFP

The former first minister of Scotland, Alex Salmond, has been cleared of attempted rape and a string of sexual assaults, including one of intent to rape.

The 65-year-old, who led the Scottish National Party to success in the Scottish Parliament and led the ultimately unsuccessful 2014 campaign for independence, denied 13 charges.

The jury acquitted him of all the charges after an 11-day trial at the High Court in Edinburgh.

During the trial, he said some of his behavior had been inappropriate but he had not broken the law.

He promised that evidence that could not be put before the court would eventually come out, but as the country faced up to the coronavirus outbreak, that would be at a later date.

"Obviously, above all, I would like to thank my friends and family for standing by me over the last two years," Salmond said outside court.

"Whatever nightmare I've been in over these last two years is as of nothing compared to the nightmare that every single one of us is currently living through.

"People are dying, many more are going to die. My strong, strong advice to you is to go home, those who can and are able to take care of your families. And God help us all."

Salmond was originally charged with two counts of indecent assault, 10 of sexual assault, an attempted rape and a sexual assault with intent to rape. He denied them all.

But the judge formally acquitted him of one charge of sexual assault after prosecutors offered no evidence during the trial.

The prosecution alleged the offences were committed at various locations across Scotland between June 2008 and November 2014.

The most serious allegation of attempted rape is said to have happened in June 2014 at the first minister's official Bute House residence in Edinburgh.

The jury returned not guilty verdicts on 12 of the charges including the alleged attempted rape, and a not proven verdict on one charge of assault with intent to rape. Under Scottish law, not proven has the same legal status as an acquittal.