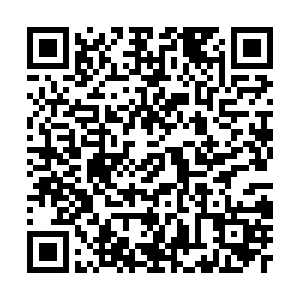 As millions of people across Europe are told to self-isolate to stop the spread of COVID-19, rough sleepers and the homeless are left in a vulnerable position and often forgotten.

Charities have warned that rough sleepers are more at risk of contracting the coronavirus as they are three times more likely to have an underlying chronic health condition.

In addition, they face a set of other difficulties including being unable to wash their hands on a regular basis, access government advice, or find a safe and secure place to self-isolate.

There are currently no data available for the exact number of homeless people across Europe. But the European Federation of National Organisations Working with the Homeless (FEANTSA) has said that at least 700,000 homeless people were sleeping rough or in temporary accommodation on one night in the European Union during 2019. This presents an increase of 70 percent compared with figures 10 years ago. 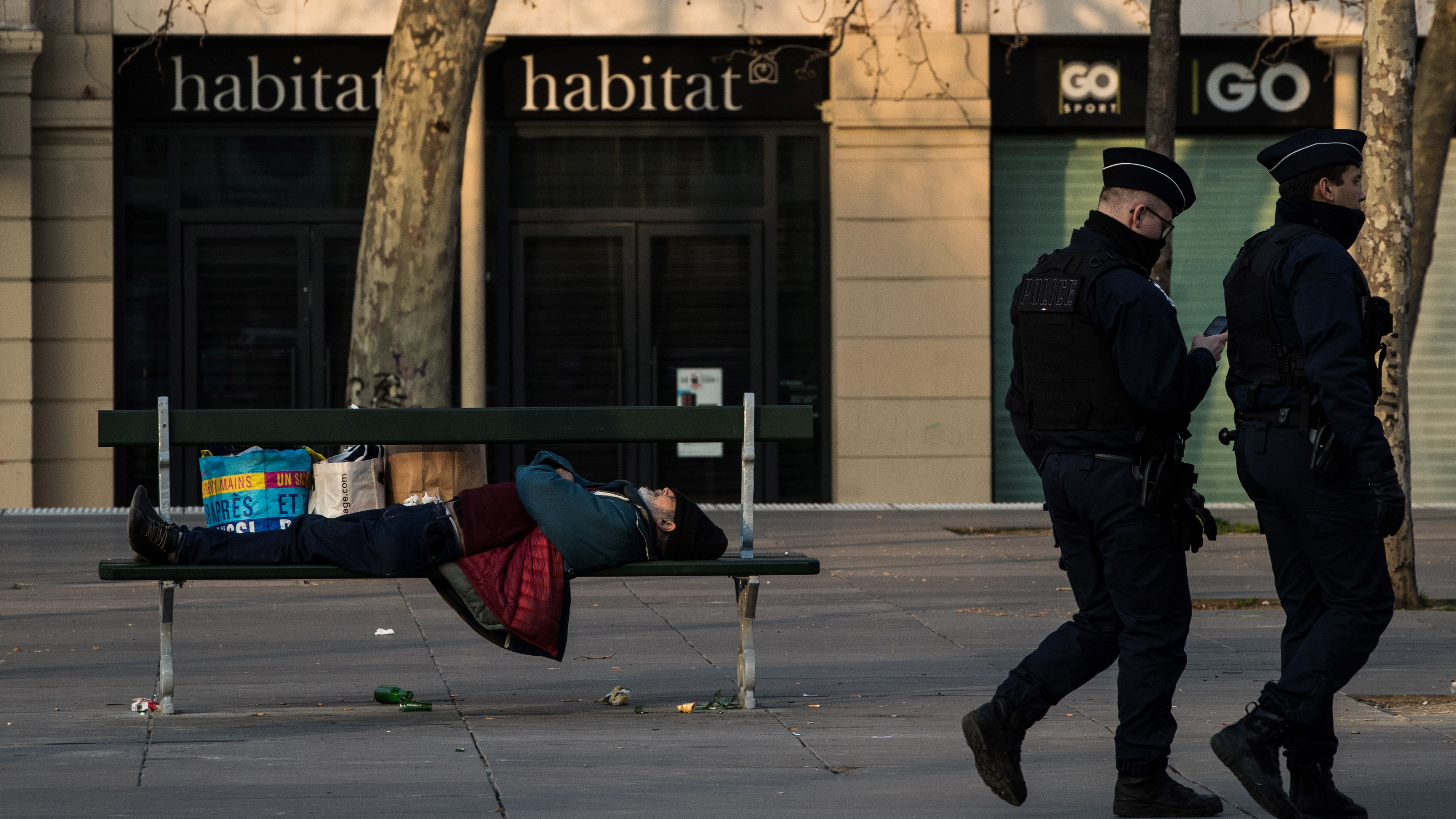 Countries across Europe are under lockdown as people are told to stay home to stop the spread of COVID-19, but for the homeless, this isn't an option. /Joel Saget/AFP

Countries across Europe are under lockdown as people are told to stay home to stop the spread of COVID-19, but for the homeless, this isn't an option. /Joel Saget/AFP

What are the risks?

FEANTSA says that many of the measures to stop the spread of COVID-19 aimed at the general population – self-isolation, increased hygiene, staying at home, strict social distancing – are not realistic for people experiencing homelessness. Therefore, the risks facing the homeless population are increased.

In terms of health, homeless people and rough sleepers are a medically high-risk group. "The prevalence of respiratory disease, diabetes, and cardiovascular diseases among the homeless population in our communities is high," FEANTSA told CGTN Europe. "If they contract COVID-19, they are more likely to become seriously ill and to die."

In addition, they face multiple barriers to accessing healthcare, as well as public health information that is often circulated via television or the internet, or through postal addresses.

People experiencing homelessness also have limited access to hygiene. FEANTSA warned that recent lockdown measures across Europe will compound this, as public toilets are closed, and access to day centers is limited, so general go-to places for running water and basic hygiene are no longer available.

Food insecurity is also a risk, as services that usually provide food for the homeless are either being forced to close due to the lack of staff, or are being stretched beyond their capacity.

Lockdown measures in several countries have also meant restaurants and cafes that would usually donate food to the homeless and vulnerable people, can no longer do so.

Additionally, soup kitchens and food banks in many countries across Europe have been affected by the surge in panic buying, which is causing a shortage of staples in many communities.

As for the issue of self-isolation, charities are warning that homelessness hostels are at risk of becoming "petri dishes" of the virus.

"Living conditions in shelters, where shared facilities and dormitories are commonplace, make it pretty much impossible to control effectively the transmission of a highly infectious disease," FEANTSA warned.

This puts rough sleepers at particular risk, as facing no other option, they may find themselves back on the streets and even more vulnerable.

Charities have been increasing pressure on governments to do more to tackle this issue, saying that protecting the homeless is a vital element of managing the wider public health crisis, as transmission of the virus among this high-risk population is very difficult to contain.

Charities are calling on governments to ensure the whole of society, including the most vulnerable, are protected during the coronavirus pandemic. /Bulent Kilic/AFP

Charities are calling on governments to ensure the whole of society, including the most vulnerable, are protected during the coronavirus pandemic. /Bulent Kilic/AFP

How are countries across Europe tackling the issue?

In the UK, the mayor of London, Sadiq Khan announced that hundreds of homeless people would be housed in hotels to self-isolate safely, giving them "vital protection" from the coronavirus pandemic.

In other parts of the country, Rick Henderson, chief executive of UK-based charity Homeless Link, told CGTN Europe that local groups are being called to action.

"Local areas are being urged to establish a task force of voluntary sector and grassroots groups that can take swift and coordinated action, setting up an effective protocol for supporting their most vulnerable people," Henderson said. "This will include finding emergency accommodation and safe spaces to enable self-isolation."

These task forces will also ensure that government funding is directed where it is needed most, according to local context.

The British government recently announced £3.2 million ($3.7 million) in emergency funding to help rough sleepers to self-isolate. This will be made available to all local authorities in England to reimburse them for the cost of providing accommodation and services to those sleeping on the streets. 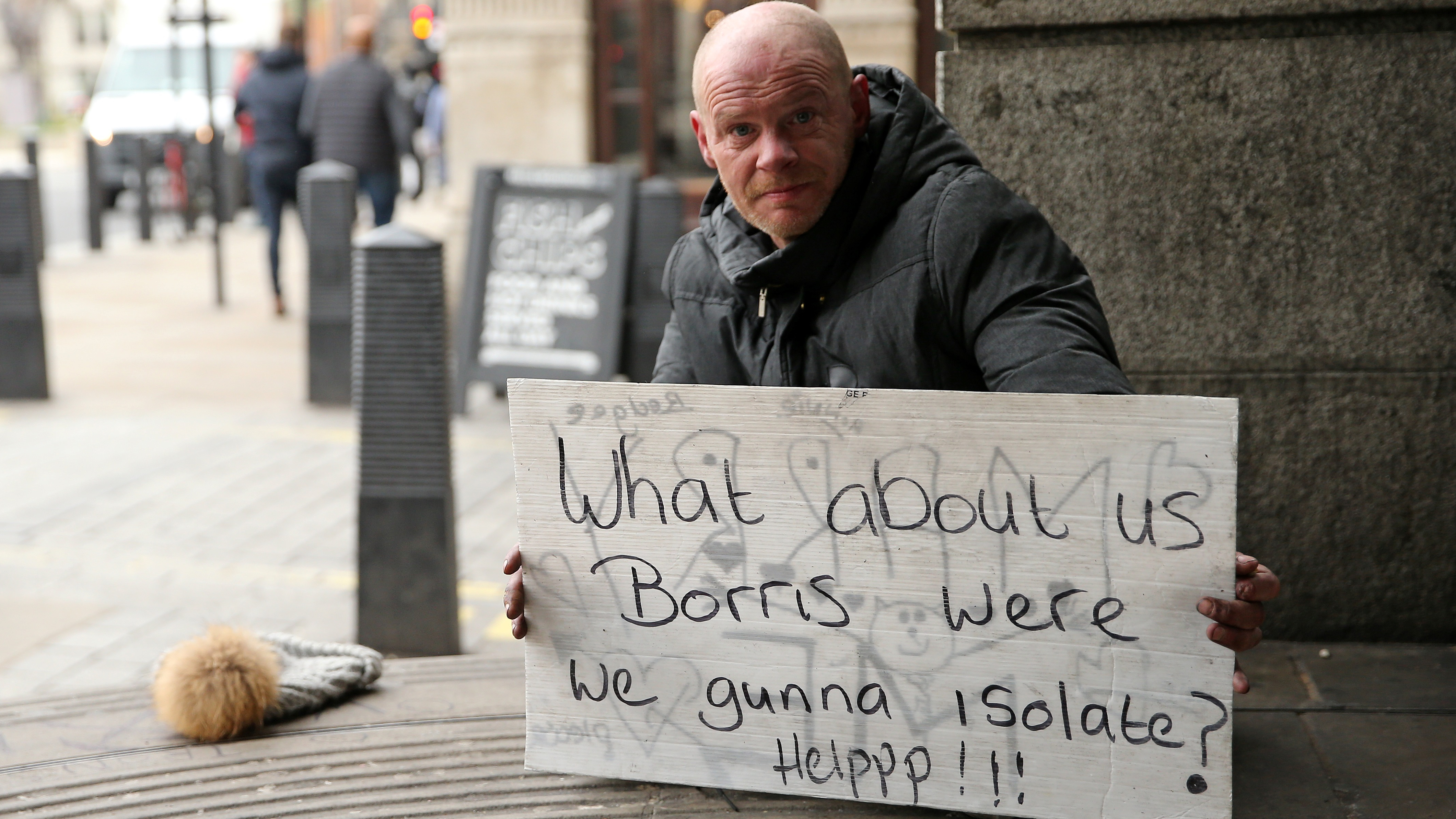 In France, similar measures are taking place, as city authorities in Nice and Cannes, among other places, are opening up accommodation for the homeless.

Cannes municipal authority said t would open the pavilion of its prestigious annual film festival, which was postponed due to coronavirus, to homeless people as the pandemic spreads across the country.

Temperature and baggage checks will be conducted at the entrance of the venue to minimize the risk of spreading the virus. And beds, meals, showers and a television will be made available, in line with regulations regarding social distancing while the country is under strict lockdown to halt the spread of the virus.

French authorities came under fire last week after homeless organizations accused police of issuing fines to rough sleepers in Paris, Lyon and Bayonne for failing to comply with self-isolation requirements.

French authorities say several dozen homeless people have been infected with the virus. Those who cannot be accommodated in homeless shelters and do not need hospitalization, will be taken to new, dedicated centers or hotels in the coming days. 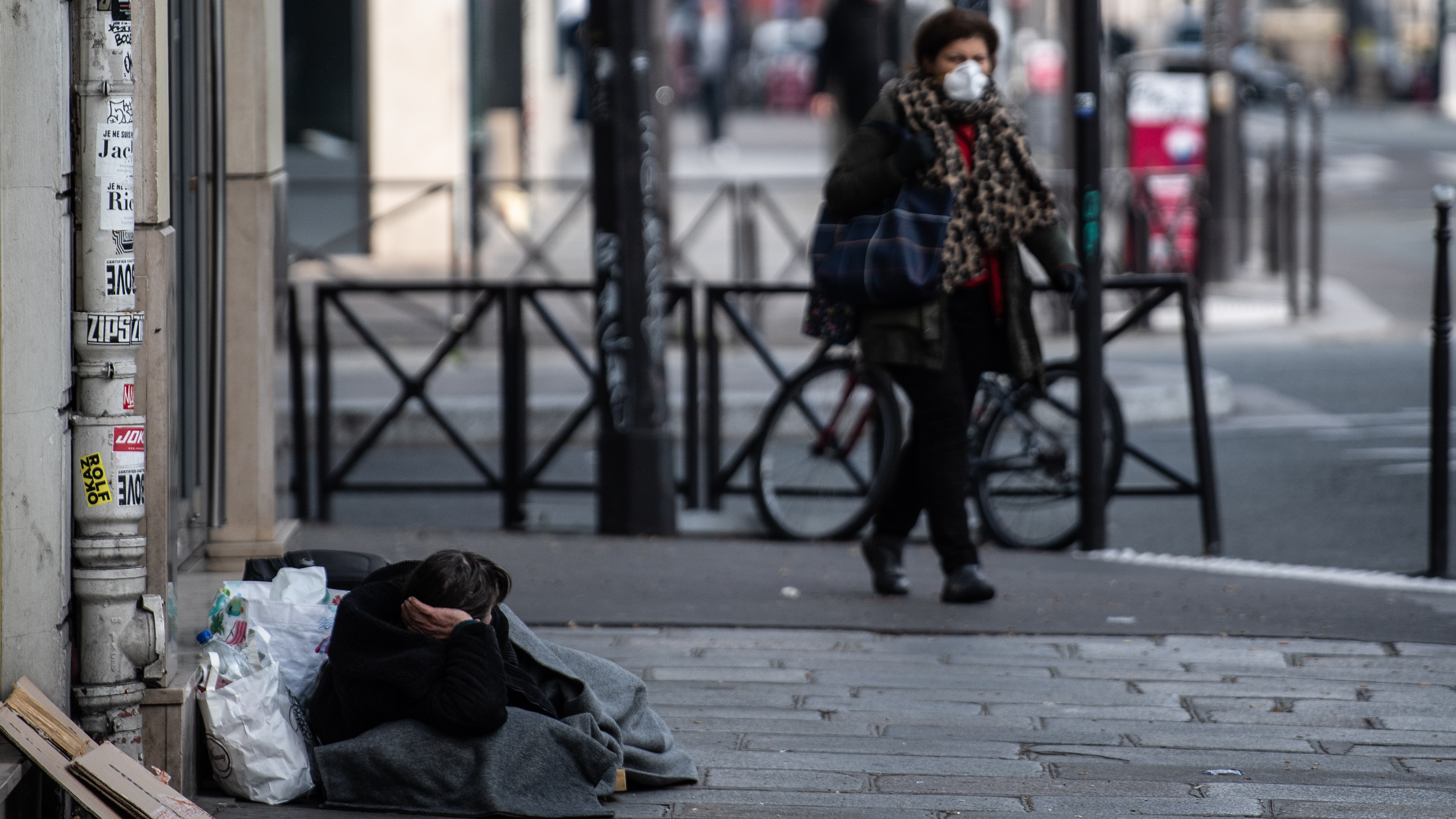 In Italy, charities in Rome and elsewhere are organizing groups of volunteers to help provide meals and masks for the homeless and rough sleepers.

One of these groups in Rome, the Community of the Catholic association, Sant'Egidio, has been enlisting the help of local tailors to make the masks for those most vulnerable who will not have access to them.

The group is also providing meals and a place to eat, as well as informing rough sleepers of the government's public health information.

"People who come here to eat, they're scared and they need to better understand what's going on and so while they're eating, we use this time to explain to them the distances that they have to keep and all the basic guidelines, so they protect themselves, as often these are people who are not well, they're fragile," manager Lucia Lucchini told AFP. 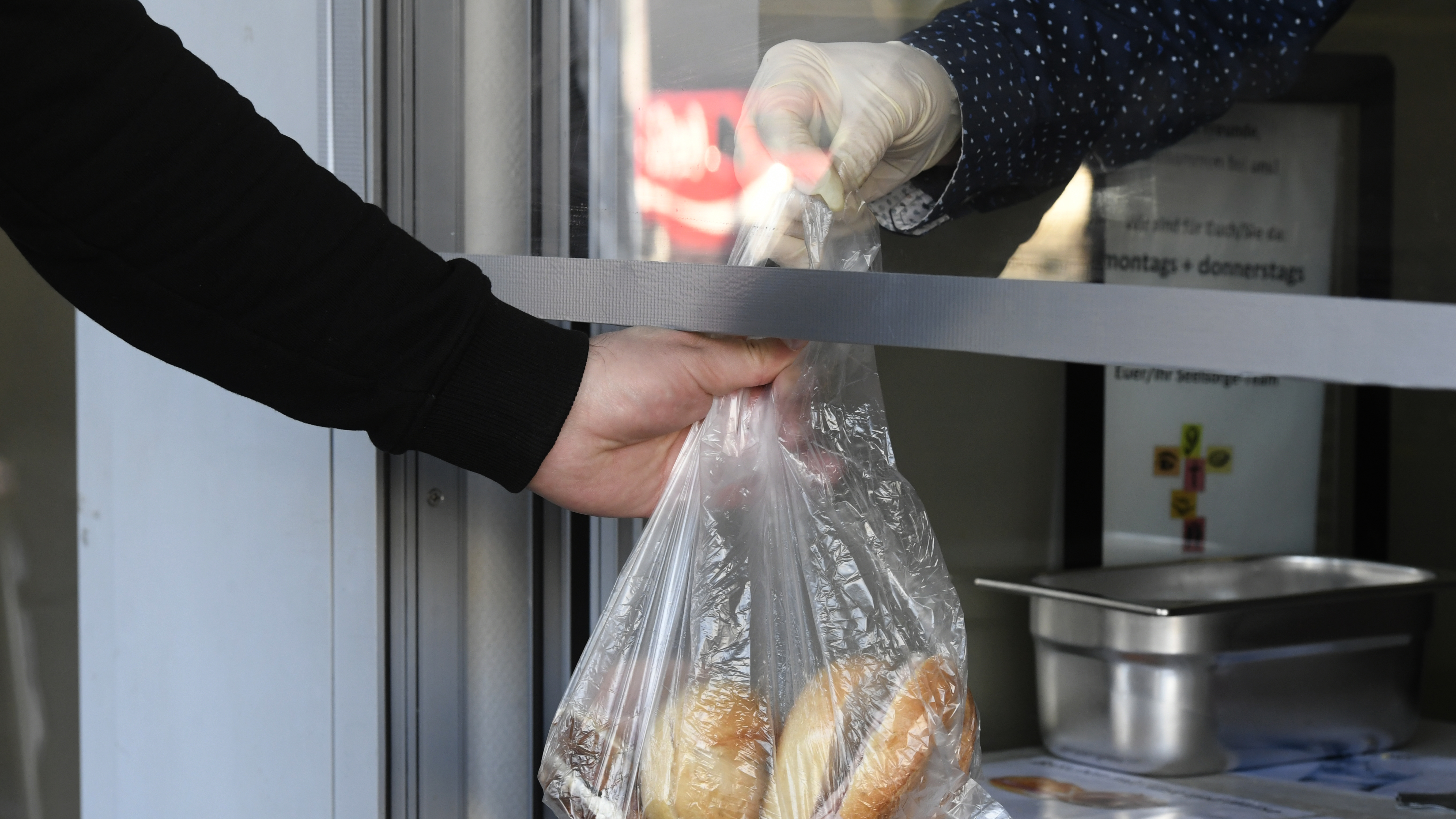 Organizations across Europe hand out food parcels to the homeless, as soup kitchens and food banks are stretched to capacity, further exacerbated by panic buying. /Ina Fassbender/AFP

Organizations across Europe hand out food parcels to the homeless, as soup kitchens and food banks are stretched to capacity, further exacerbated by panic buying. /Ina Fassbender/AFP

What more needs to be done?

While some countries implement measures that take the homeless and rough sleepers into account during this health crisis – including issuing funding and support to local councils – charities say that much more needs to be done to keep the most vulnerable safe.

"Further initiatives and funding are needed to ensure that people – whether homeless on the streets, in hostels and shelters, or using day centres – are able to practice social distancing, to self-isolate, and to access testing and treatment should their condition deteriorate," Henderson told CGTN Europe.

Across Europe, there are calls for cross-sectoral cooperation between the the homeless sector, relevant public authorities and public health bodies at a national, regional and local level to ensure the safety of all members of society during this pandemic and in the future.

"Future pandemic planning must include proactive measures to protect the most vulnerable in our societies, and homelessness must be considered an urgent public health priority." FEANTSA told CGTN Europe.