- Spanish soldiers have found dead bodies as they rescue elderly residents abandoned by care home staff. The army is helping to disinfect retirement homes across the country.

- Eurozone business activity plummeted to a record low of 31.4 this month from February's 51.6. It is by far the biggest one-month fall since IHS Markit's Eurozone Composite Flash Purchasing Managers' Index (PMI) survey began in mid-1998.

- Experimental drugs are being given to 3,200 patients in the UK, the Netherlands, France, Belgium, Spain and Luxembourg in new clinical trials including a much touted antimalarial medicine.

- Austria has mobilized military reservists for the first time since World War II to assist with food supplies, medical support and law and order.

- The German state of Saxony will treat at least six Italian patients who are finding it difficult to access medical assistance in Italy.

- Hungary's opposition parties have stopped the government fast-tracking a bill in parliament that grants sweeping powers and the right to extend the state of emergency.

- Ex-FInland president Martti Ahtisaari, 82, who received the 2008 Nobel Peace Prize, has tested positive for the coronavirus.

- The European Parliament will temporarily switch to electronic voting by email as MEPs are forced to work remotely.

- The budget carrier Norwegian Air secured an initial cash infusion of $26.68 million from a government rescue package for the airline industry. 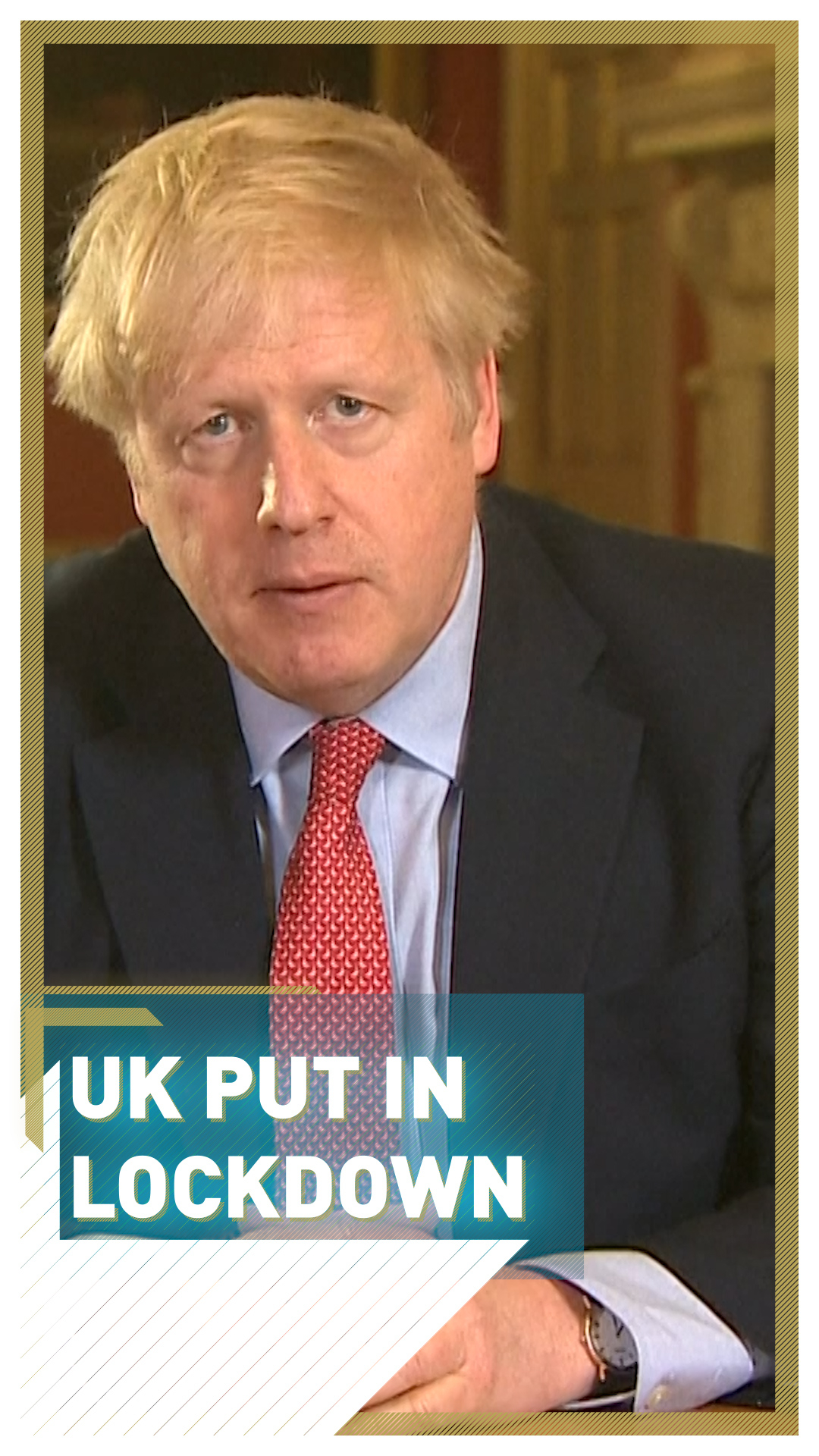 There have been 87 deaths caused by coronavirus in the UK since Monday, taking the total to 422, according to the latest government figures.

On Monday night, Prime Minister Boris Johnson imposed a lockdown on the UK.

It's a dramatic U-turn for the government. One week ago, it asked people to practice social distancing and work from home. But after a weekend when large crowds descended on parks across the country, it was decided that firmer action was essential.

Now the authorities say people should only leave home for exceptional reasons; to buy food, essential work, to help an elderly person and for brief exercise. No groups larger than two people are allowed on the streets.

The measures will be reviewed in three weeks. Emergency legislation is expected to pass on Thursday night that would allow police to impose fines on people who flout the restrictions. 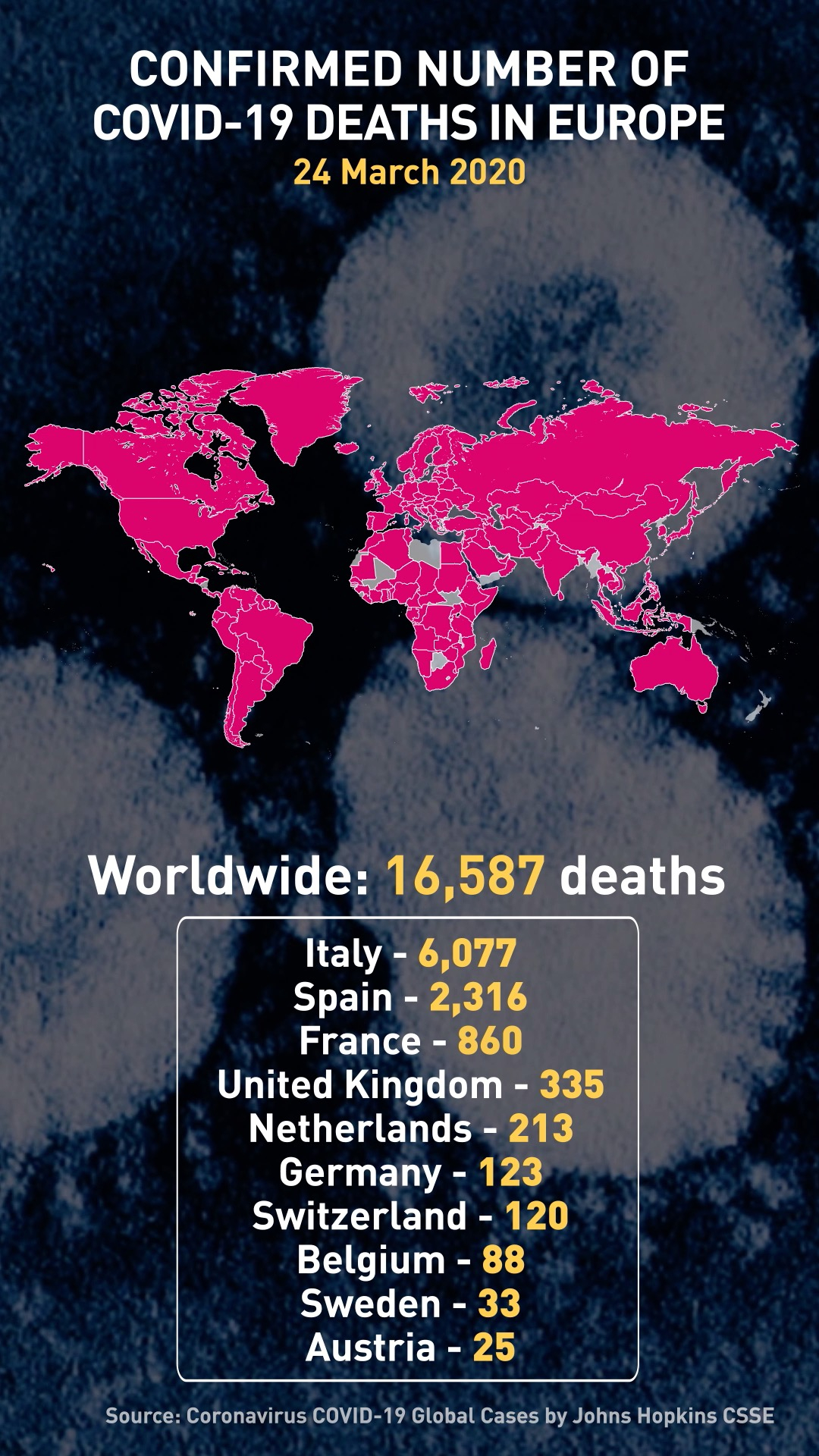 There was good and bad news in Spain as the country recorded its worst day in the fight against the coronavirus in terms of deaths.

The latest figures issued by the health ministry showed the number of fatalities rose by 462 in the 24 hours between Sunday and Monday.

Fernando Simón, the director of the Health Ministry's Coordination Center for Health Alerts, admitted the peak of infections would probably be reached this week.

The good news? Well that came with the drop of people in intensive care units. Simón said it had fallen from 15 percent to 13 percent, describing it as a "small reduction that gave a certain amount of hope."

Germany has 29,056 confirmed cases and 123 deaths, according to Johns Hopkins University at 09:30 GMT on Tuesday.

Chancellor Angela Merkel is still working from home after a doctor who treated her tested positive for COVID-19. Merkel's first result came back negative and she will be tested again this week.

The state of North Rhine-Westphalia has issued a catalogue of fines for violations of its social-distancing rules, with penalties of up to 5,000 euros ($5,378).

According to the Der Spiegel news outlet, six million protective face masks ordered by the German army have mysteriously disappeared in Kenya. Chancellor Angela Merkel is working from home after a doctor who treated her tested positive for COVID-19. /Michael Kappeler/AFP

Chancellor Angela Merkel is working from home after a doctor who treated her tested positive for COVID-19. /Michael Kappeler/AFP

EU finance ministers will try to craft a new set of fiscal weapons to tackle the fallout from the coronavirus in a late afternoon video conference. They're looking for creative ways to use the European Stability Mechanism – the bloc's 410 billion euro ($440 billion) bailout fund.

There are essentially three options on the table right now: credit lines, "corona bonds" to raise cash, and a new facility for emergency healthcare spending.

Striking a deal won't be easy. Rich nations such as Germany are loath to lump in their risk with less stable economies, while countries such as Italy still have post-traumatic stress over the strings attached to previous bailouts.

Finance ministers want to strike a deal before Thursday's big EU leaders pow-wow, so that once they sign off, the measures can be implemented straight away.

Switzerland's ski town of Verbier has seen a surge in infections and faces the prospect of being sealed off from the rest of the country.

Local media have reported a cluster of 60 infected people in Val de Bagnes. Several local doctors have also called for Verbier to be sealed off.

Quarantining an entire region is not allowed in Switzerland but canton authorities are seeking guidance from the federal government in Bern.

Switzerland now has more than 8,000 COVID-19 cases and has mobilized its army to help deal with the pandemic. 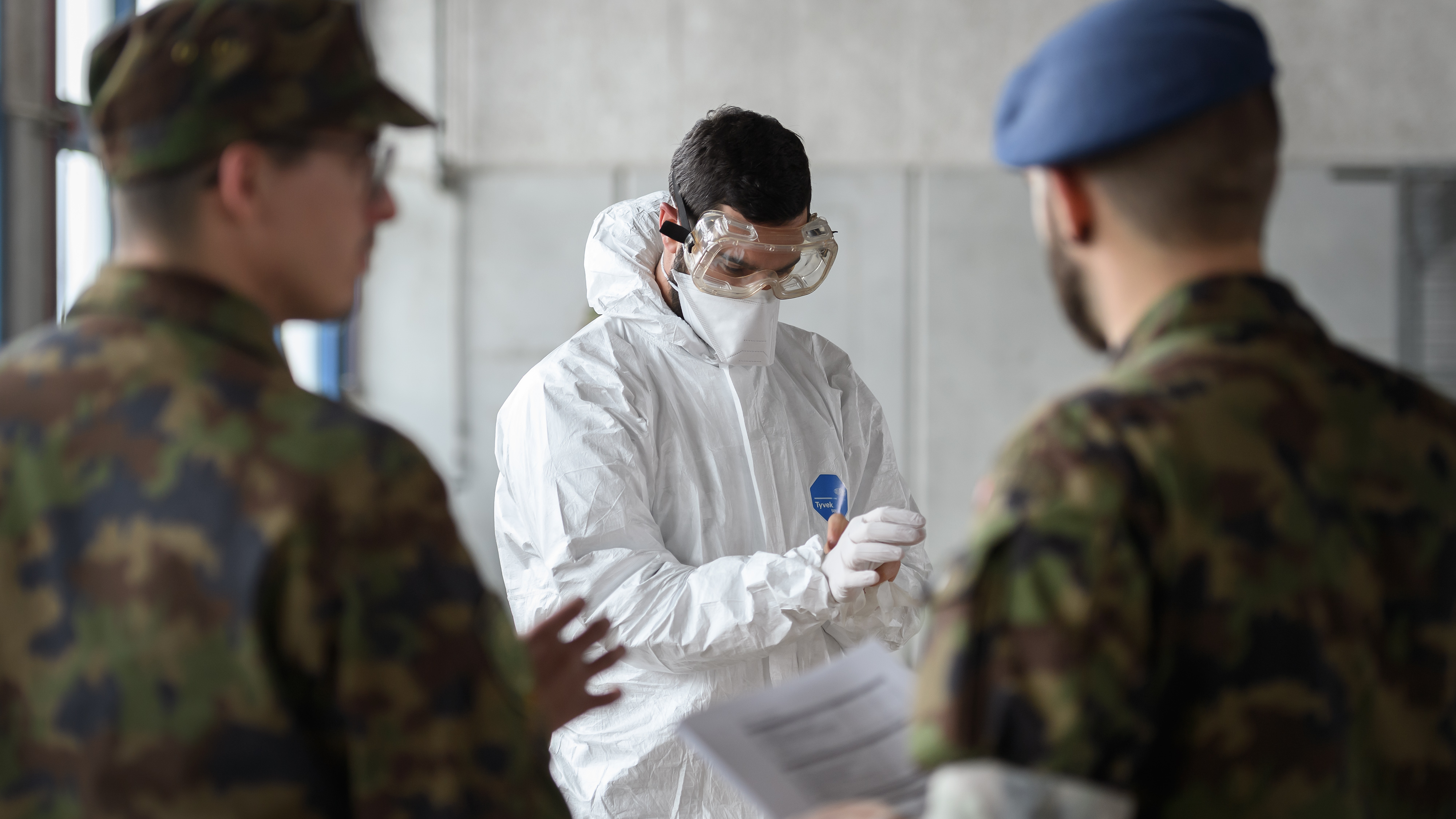 Switzerland has mobilized its army to help deal with the pandemic. /Fabrice Coffrini/AFP

Switzerland has mobilized its army to help deal with the pandemic. /Fabrice Coffrini/AFP

Russia's Prime Minister Mikhail Mishustin has asked his teams to develop a system of tracking people who have the coronavirus, using their mobile phone data.

It would be monitored by new regional headquarters and would send warning messages to anyone who had been in contact with infected patients.

Russia is bracing itself for a spike in infections despite relatively low numbers so far.

Many cases have been in Moscow, where the city's mayor has imposed a string of measures.

He has warned those aged over 65 to stay inside, and where possible to travel to out-of-town dachas, the private cottages that many families traditionally own.

- Bolsonaro further loses public support in his downplaying of COVID-19