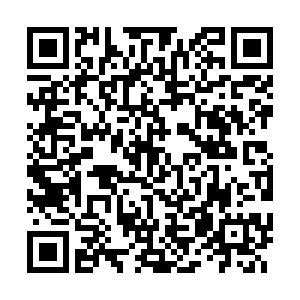 Britons are told to stay at home, with all non-essential shops now being closed down and police given the power to stop any public gatherings. Prime Minister Boris Johnson said people should stay at home "to save many thousands of lives."

People can still leave home for one form of exercise a day on their own or with members of their own household, they can go to a shop for basic necessities, and travel to and from any job judged as essential. The only larger gatherings still allowed will be funerals. The new measures came after criticism of crowds pictured in sunny parks and on beaches at the weekend.

Earlier, the UK brought in the army to help deliver supplies of protective equipment to healthcare workers after doctors say they feel like "cannon fodder" and plead with the government to provide the right kit.

The pandemic is "accelerating," according to World Health organization (WHO) director-general Tedros Adhanom Ghebreyesus. The total number of global cases has surpassed 350,000 with more than 15,000 deaths.

More than 50 Cuban doctors have arrived in Milan to help Italy's stretched hospitals and are applauded at the airport.

"We are at war," says Spain's prime minister Pedro Sanchez as he calls on Europe to launch a massive, coordinated public investment program like the post-World War Two Marshall Plan.

Football's World governing body FIFA and WHO team up to start a new awareness campaign called Pass the message to kick out coronavirus.

Greece announces a lockdown, restricting movement from Monday morning with only a few exceptions.

Italy bans travel within the country in yet another attempt to slow the spread of the coronavirus, after Sunday figures show fatalities have hit 5,476.

The European Central Bank's emergency measures are sufficient and effective but the bank is ready to do more, a member of its governing council, Ignazio Visco says.

Canada and Australia say they will not send athletes to the Tokyo Olympics if the Games go ahead as scheduled this year, heaping more pressure on its organizers to postpone.

Renault may seek French government guarantees to bolster its finances, but a renationalization of the car maker is not being considered, its chairman tells Le Parisien newspaper. 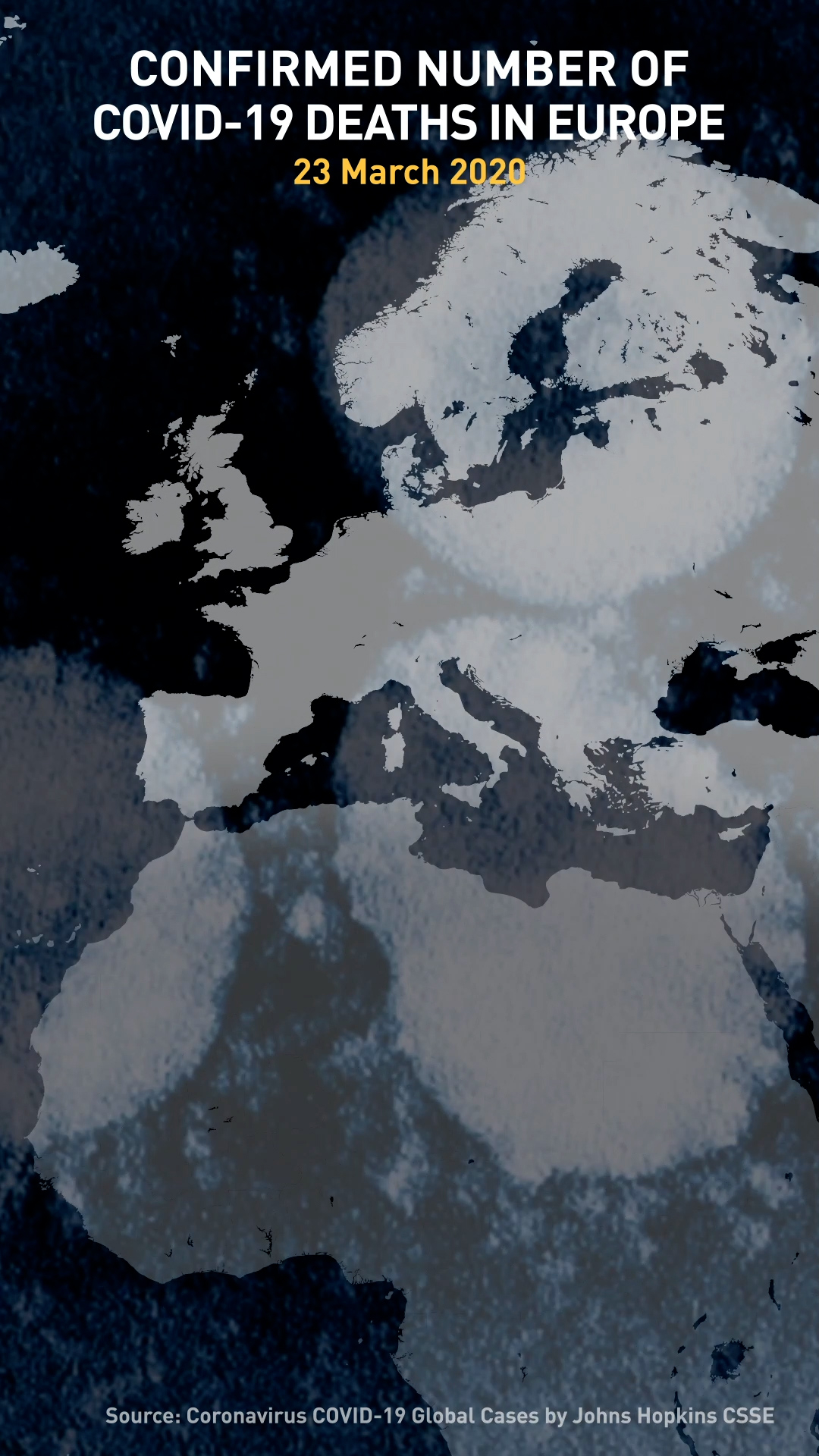 Switzerland tightened measures to curb the COVID-19 pandemic. Only businesses that provide essential goods such as supermarkets, bakeries and pharmacies are open. Banks and post offices are also open. Bars and restaurants were closed a week ago for an initial two-week period which is likely to be extended.

The public in Switzerland, where there have been at least 60 coronavirus-related deaths, are allowed to go outside but must maintain a two-meter distance from each other.

Meanwhile, three Swiss hospitals have agreed to provide intensive-care treatment for several seriously ill patients from France. Two hospitals in Basel and one in Jura will take two patients each after a distress call for help from its neighbor.

One of the worst-hit Swiss cantons, Ticino, which borders Italy, has ordered factories and production lines to close unless they relate to critically important areas such as healthcare, food or agriculture. 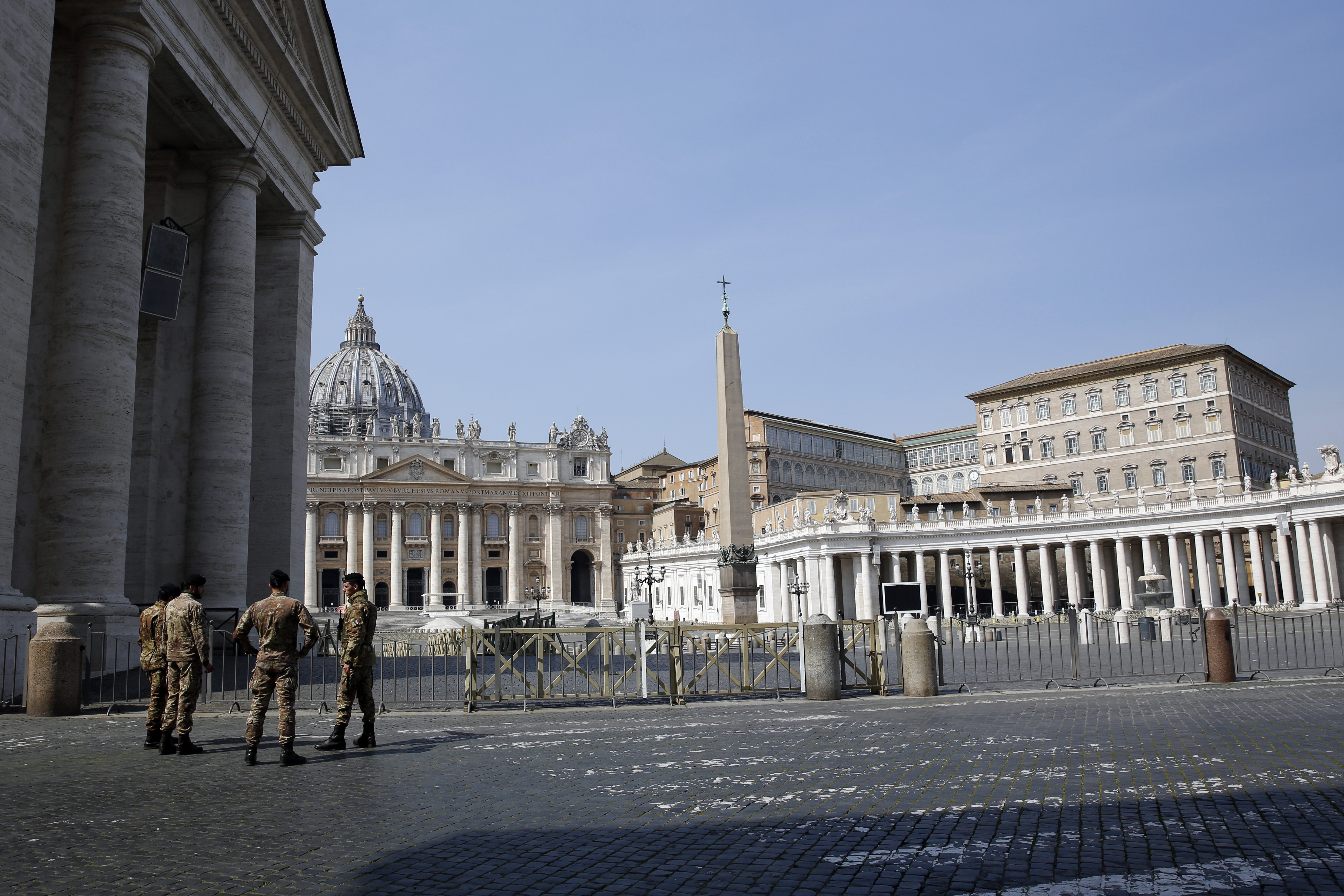 Italian soldiers patrol the area in front of an empty St Peter's Square, at the Vatican. /AP/Alessandra Tarantino

Italian soldiers patrol the area in front of an empty St Peter's Square, at the Vatican. /AP/Alessandra Tarantino

France has reported its first death of a doctor from COVID-19.

Jean-Jacques Razafindranazy was an emergency doctor at a hospital in the town of Compiegne, to the north-east of Paris. The 67-year-old physician, who was originally from Madagascar, had been suffering from the virus for about three weeks before he died, according to French media.

The health secretary announced the doctor's death over the weekend as the number of fatalities in France increased to 674.

France continues to enforce its lockdown in an attempt to fight the outbreak.

About 1.8 million police checks have been conducted so far since the strict lockdown conditions came in on 17 March.

From those checks, where police stop and question anybody moving around outside their home, there have been more than 91,000 instances of people breaking the confinement measures.

Germany has 24,873 confirmed coronavirus cases and 94 deaths as of Monday, according to Johns Hopkins University.

The country's chancellor, Angela Merkel, is in self-isolation after a doctor who treated her on Friday tested positive for coronavirus. Her spokesperson says she will continue to work from home and will be tested in the coming days.

Prior to receiving the news, Merkel announced stricter national rules banning groups of more than two people in public, except members of the same family or household.

The coronavirus crisis could cost Germany more than half a trillion euros ($530 billion) and more than a million jobs, according to calculations by the Ifo Institute. It projected an economic contraction between 7 and 20 percent, depending on how things play out.

Germany finance minister, Olaf Scholz, is presenting an emergency budget to the country's cabinet, which would allow the government to borrow an additional $160 billion, with further loan guarantees of several hundred billion dollars. The budget could be approved by Germany's parliament on Wednesday.

In a video conference on Monday, EU finance ministers are expected to approve the European Commission's proposal to temporarily scrap the bloc's fiscal rules. This would allow governments to unleash the fresh spending needed to soften the economic blow of the coronavirus outbreak.

On Friday, the Commission triggered the General Escape Clause for the very first time, clearing the way for unlimited cash injections.

EU foreign ministers will also hold a video conference on Monday, during which they will discuss the geopolitical implications of the pandemic, the repatriation of EU citizens and the situation at the bloc's borders with Turkey.

Meanwhile, as the number of coronavirus cases grows in Belgium, the country's health minister said the current lockdown could be extended for another eight weeks.

In an interview with the newspaper De Zondag, Maggie De Block said: "We are now heading towards the peak of the epidemic, after which the curve will descend. I think this situation will last for at least another eight weeks – it would be the normal curve." 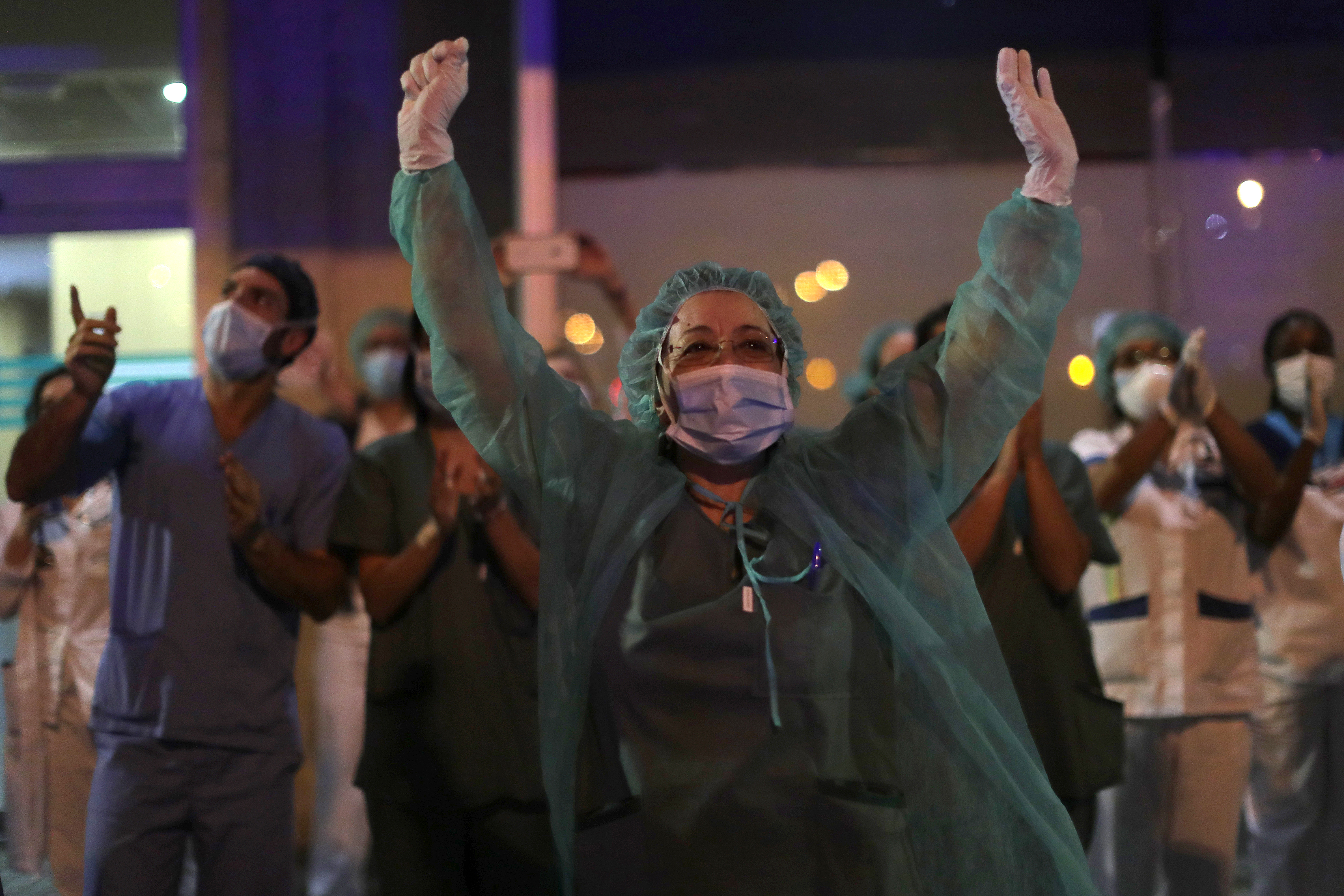 Health workers react as people applaud from their houses in support of the medical staff at the Jimenez Diaz Foundation University hospital in Madrid. /AP Photo/Manu Fernandez

Health workers react as people applaud from their houses in support of the medical staff at the Jimenez Diaz Foundation University hospital in Madrid. /AP Photo/Manu Fernandez