How COVID-19 is pushing the Italian healthcare system to the brink of collapse
Gary Parkinson, Giulia Carbonaro 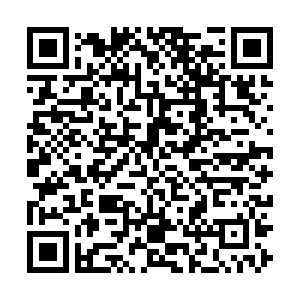 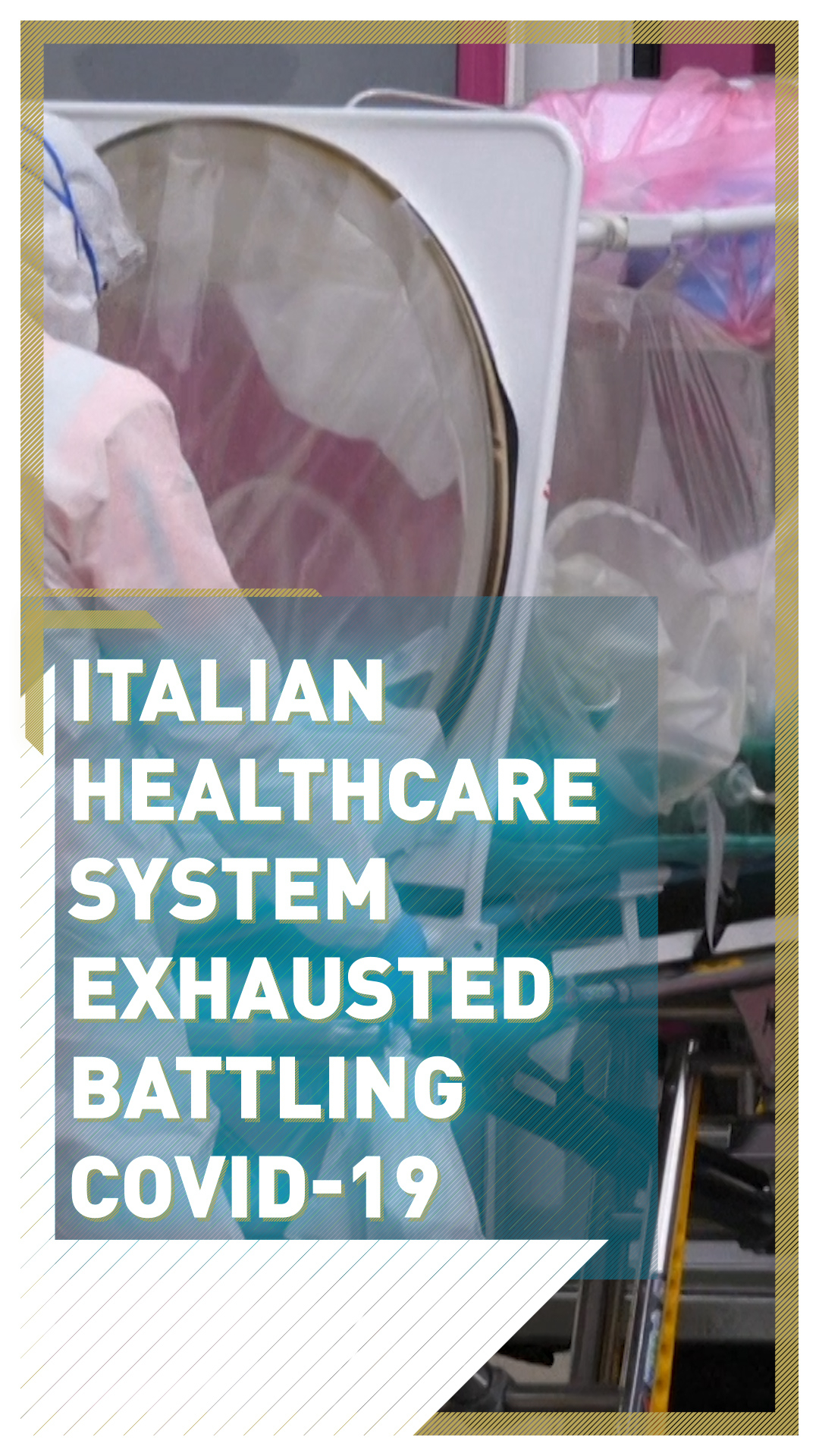 "Working on the front line" is a term often used too lightly, considering its roots in the trench warfare of a horrific and brutal world war. But as peacetime comparisons go, it's not too much of a stretch to use the phrase in relation to being a bioemergency respondent in a Milan hospital as COVID-19 wreaks lethal havoc on the Italian public.

In such conditions, healthcare professionals need enormous amounts of expertise, resilience, adaptability and humanity. A case in point is Maria Rita Gismondo, director of the Laboratory of Clinical Microbiology, Virology and Bioemergencies at Milan's Ospedale Sacco.

Gismondo has seen the patient statistics play out in front of her. "Lots of them are aged people; most are already affected by other chronic diseases," she says. "Most patients in intensive care are over 60.

"Those who die belong to wider age classes and always suffer from two or three more severe pathologies. The deceased are largely over 80, generally over 83-84. Young people are treated as well in the intensive care unit, but almost all of them recover."

As the outbreak numbers have sickeningly rocketed, Italy's health system has struggled to cope. "Overcrowding is a reality," acknowledges Gismondo, "but so far – at least in the hospitals where I work – no patient needing to be treated for other reasons has ever been refused intensive care. Our capacity is close to saturation, but – thanks to God – not yet to the point to be forced to reject patients."

Gismondo refutes stories of patients being turned away from intensive care. "In my hospital it's not the case," she insists. "I spoke about it just yesterday with a colleague and so far we've hospitalized all those who needed intensive care. I don't know the situation in Bergamo, where I've been told the conditions are totally different." 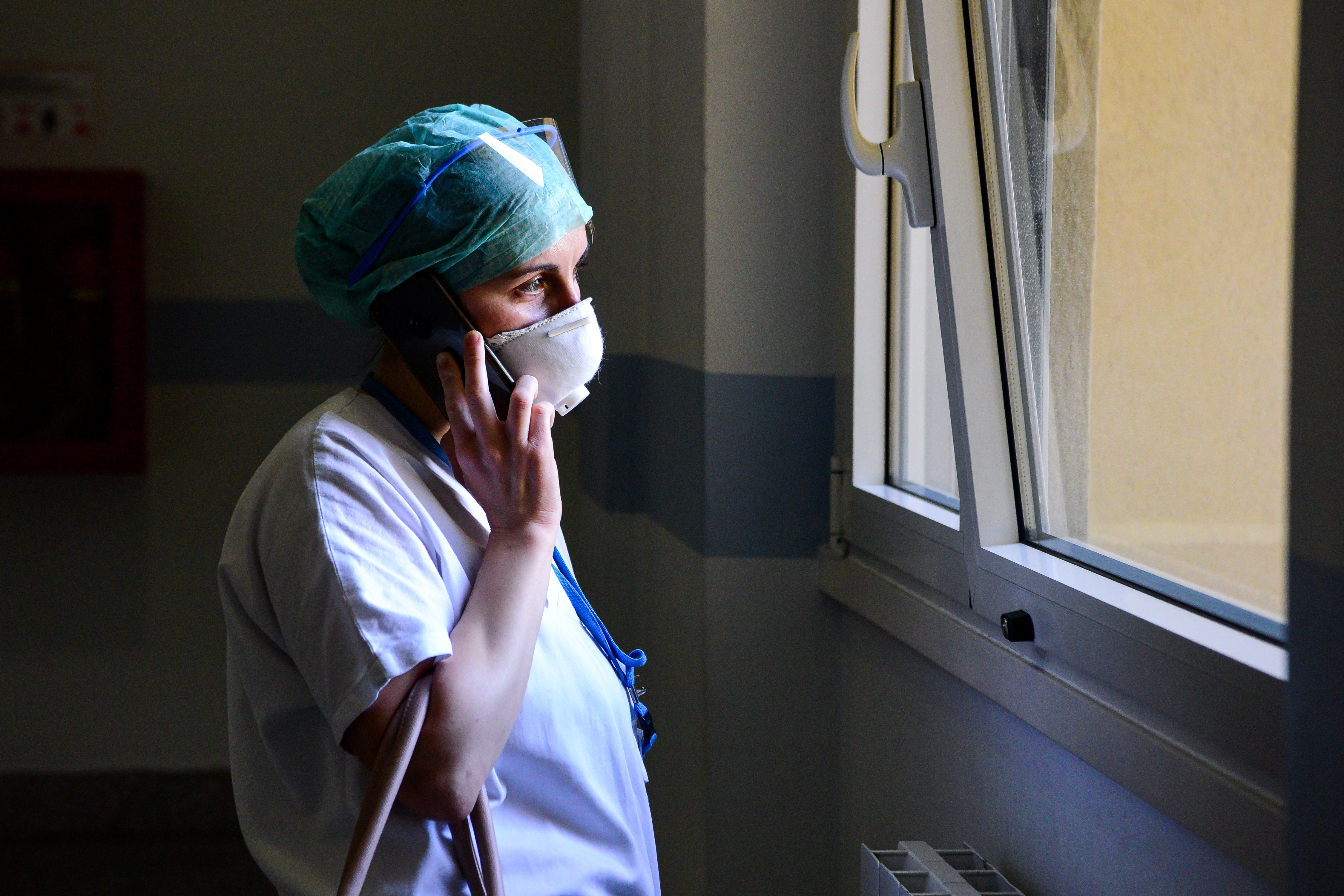 The situation is less dramatically challenging as you move towards southern Italy. Monica Carfora, a doctor who works in the emergency room of Ospedale Santo Spirito in Rome, says that her hospital has also been able, so far, to treat all the patients who needed care. "We hear rumors about doctors having to turn patients away, but I can't personally confirm them," she says.

"I think that in these cases, the selection is a 'natural' one, that doesn't depend on the medical staff. The infected patients who die of COVID-19 already have certain pathologies, they would probably die from complications with pneumonia as well. If the patient doesn't show signs of possible recovery, we have to prioritize someone who can recover."

What has happened in Italian hospitals is that less urgent cases are being redistributed and the health system reorganized. "Most of the daily routine has been suspended, in order to free the beds – and the medics – needed to handle COVID-19," says Gismondo. "Hospitals like ours are mainly focusing on COVID-19 and other emergencies."

She adds: "Patients with scheduled medical checks are being reoriented to other hospitals, which are not treating COVID-19 patients. Other hospitals not equipped for intensive care take care of the daily routine." 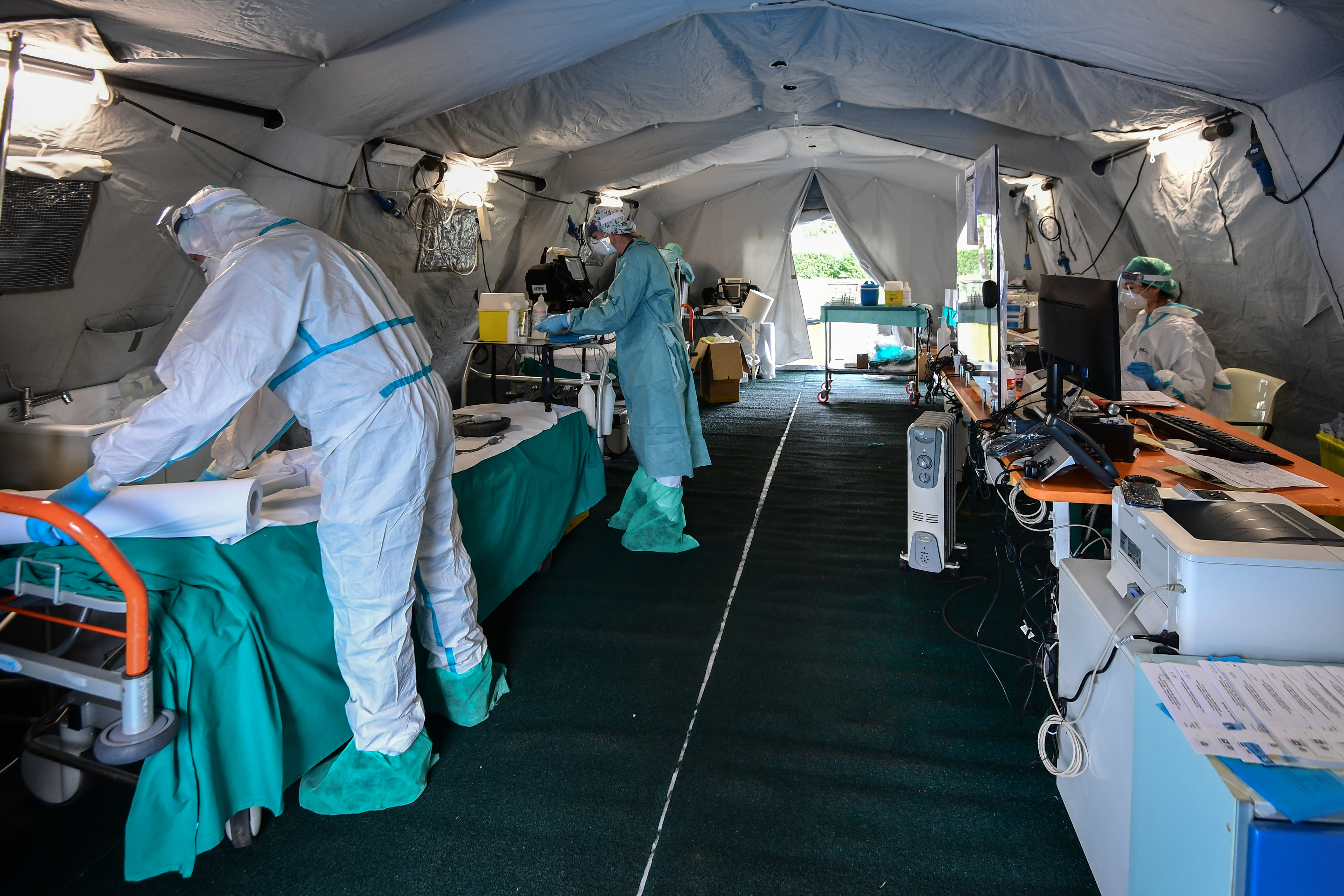 Medical staff working in a triage tent at an emergency structure set up for new arrivals at the hospital in Brescia, Lombardy. /Miguel Medina / AFP

Medical staff working in a triage tent at an emergency structure set up for new arrivals at the hospital in Brescia, Lombardy. /Miguel Medina / AFP

Gismondo notes that, in a way, the health services have become victims of their own diligence: numbers have been swollen by encouraging early detection and treatment rather than waiting for the illness to progress. "We'd rather receive patients at a first stage of the disease, because the earlier we intervene, the higher are the chances of a recovery," she says.

But this approach quickly filled Italian hospitals, and more people are now asked to stay at home, unless they show severe symptoms. "Until just a short time ago, all those who feared to be positive came to the hospitals, were tested and – at the very first stages – were even hospitalized. Now, since we have learned to know the pathology, patients with light symptoms are not hospitalized anymore and are just sent back home," says Gismondo.

While Italy is still posting Europe's highest numbers of coronavirus deaths – as of Thursday afternoon it had recorded at least 3,405 deaths, more now than in China – Gismondo is more scientifically circumspect in her attribution. "So far, the patients who have died directly from coronavirus in Italy are just one or two and their cases have still to be completely investigated. An overwhelming majority of the others already suffered from three to four pathologies before getting infected by an opportunistic virus."

The resources available to Italian hospitals are running out fast as the number of patients who need care still increases. "Concerning labs and beds, we still hold on," says Gismondo. "We're not collapsing yet, but if we had more space we could certainly work better. On the contrary, the workforce is lacking. So far, we're relying a lot on temporary personnel and students but we should soon be relieved by fresh job openings for eight-month contracts for biologists and microbiologists."

The main concern is over equipment and staff. Italy has been asking for external help and international solidarity to tackle the emergency, but so far only China has answered this call, sending medical staff and essential equipment.

"I always thank all my nursing and even administrative staff who do not skimp on any procedure, who do not pay attention to timetables, who respect all the shifts that need to be done, skipping holidays, days off, and so on," says Paolo Favini, general manager at ASST (Local Health Care Authority) in Lecco, Lombardy.

"But I must also thank this important contribution that comes to us from China, because 12 doctors and 24 nurses are certainly a very useful contribution. Among other things, by those who have already had the experience of seeing what happened there."

A mural by artist Franco Rivolli dedicated to the nurses working at Italian hospitals in Bergamo, Lombardy. /Piero Cruciatti /AFP

A mural by artist Franco Rivolli dedicated to the nurses working at Italian hospitals in Bergamo, Lombardy. /Piero Cruciatti /AFP

In Italian hospitals there's also concern over the health of the medical staff, who are working almost non-stop to keep up with the demand for care. "We still have ordinary face masks but they start being rationed," says Gismondo.

"What we start lacking of are higher-protection face masks and this is a matter of concern, for the security of the personnel who are everyday in touch with highly infectious patients. We've been told we'll receive more, we get just a few every day and obviously we treat them as very precious."

Doctors and nurses have become national heroes in Italy, working exhausting shifts day and night to keep up with the work of taking care of an overwhelming number of patients. "At the beginning of this crisis, we medics all ended up spending the night here at the hospital, because there were still no standard procedures," says Gismondo.

"Now, we are still here night and day, but at least we manage to work on shifts. Therefore, we're less exhausted and we work better, but we work better also because we're better organized."

Exceptional measures have been taken to keep up with the necessity to have more medical staff at work. "We are working with a real sense of urgency to hire new nursing medical staff, to replace the staff who have become positive, to have all the DPA [Data Processing Agreement] and all protections for staff and patients who enter [hospitals]," says Favino.

"We are hiring, retirees came back to work, and residents from the last year are starting working." 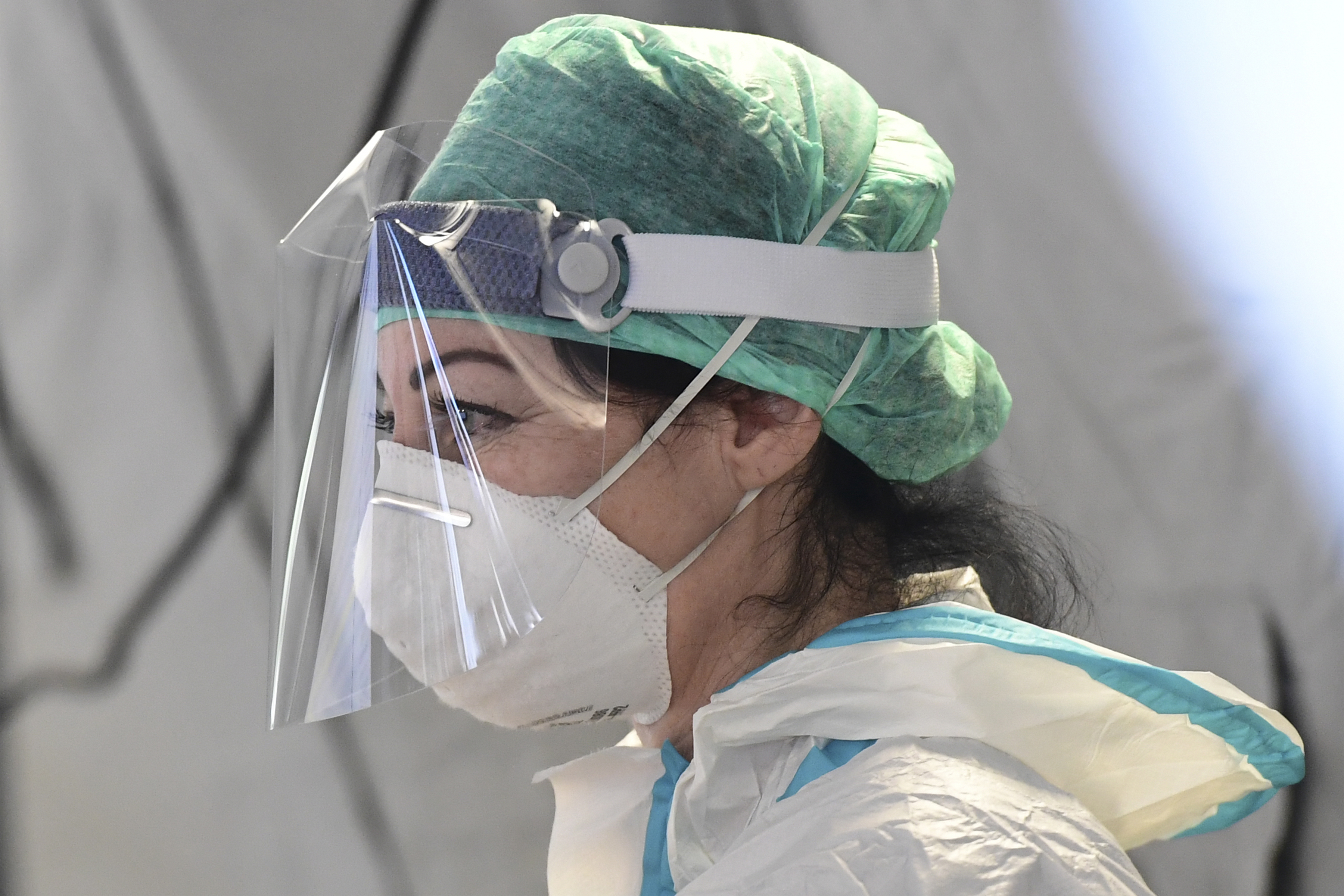 Italy's efforts to stop the spread of the virus have led to a nationwide lockdown that was initially regarded as a rather dramatic measure, but as other European countries follow in applying the same restrictions, it has become even more important to know: are these measures working to prevent contagion?

According to Gismondo, it might be too early to tell. But she's hopeful: "Some days we're very optimistic, some days we turn pessimistic, but overall the situation is very unchanged. The good news is that more patients have recovered and not only among those who are treated in the 'sub-intensive' care, but also among those who are at home. The number of recovered patients is now luckily overcoming the number of deceased."

The race to find a vaccine for COVID-19 is on and making progress, but it seems impossible that it will be available before a year or so. The only way we can protect ourselves, at the moment, is to wash our hands and practice social distancing – and partially sacrifice our personal freedom for the sake of the common good.

"We just have to respect the rules: first of all, to stay at home to prevent the virus to spread any further, because more contagions means more ill people, especially among old and chronic patients," warns Gismondo. "This is a personal and a social must. At the same time, I call everybody not to panic: the situation is serious, this virus kills people but kills especially the health system."

Italy's healthcare system is one of the world's finest and still the COVID-19 outbreak in the country has pushed Italian hospitals to the brink of collapse. So what can Europe learn from this?

Gismondo calls for more coordination and standardized procedures at the European level: "Unfortunately at a European level every country has its own methods and parameters to count the victims. As a consequence, we have no 'clean' and reliable figures to understand the situation.

"We should all rely on the same parameters to count the positive patients, the infected people, the deceased. This is the precondition for all of us to better help each other and better understand what the situation looks like. But unfortunately things are not like that."