- Spanish government closes hotels and promises special measures in nursing homes after death toll soars to 1,002 on Friday and cases near 20,000

- A million surgical face masks and 100,000 rapid-result coronavirus tests arrive in Slovakia from China to help alleviate the shortage

- France tries to facilitate the repatriation of 130,000 of its nationals stuck overseas due to the outbreak

- Spain prepares new flights to Guayaquil, Ecuador, to airlift Spanish citizens back home after a plane was prevented from landing on Friday

- Mental health professionals brace for a spike in demand, as the virus takes emotional toll

- Tens of thousands of U.S. National Guard troops could be activated to help states deal with the outbreak The number of people who have tested positive for COVID-19 in Switzerland and Liechtenstein has risen to more than 3,000. Swiss health authorities have warned the virus could overwhelm the country's healthcare system if cases continue to rise rapidly. However, the mortality rate remains low, especially relative to neighboring Italy, which now has a death toll higher than that recorded in China.

The authorities have taken measures to prevent the spread of the virus by closing down bars and restaurants, sports centers, swimming pools and museums. People are urged to stay indoors and work from home wherever possible.

Swiss companies are struggling after the government forced many high street shops and "non-essential" services to close until 19 April. The government already announced a 10 billion Swiss francs ($10.2 billion) emergency aid package, but many businesses feel it will not be enough.

The Swiss watch industry is also facing economic hardships. Rolex has shut down all its plants in Switzerland for at least 10 days from Tuesday this week. Even a statue of cartoon character Titeuf created by Swiss cartoonist Zep is wearing a protective mask as schools across Switzerland remain shut. /Fabrice Coffrini/AFP

Even a statue of cartoon character Titeuf created by Swiss cartoonist Zep is wearing a protective mask as schools across Switzerland remain shut. /Fabrice Coffrini/AFP

France's new Defence Council, formed explicitly to deal with the coronavirus outbreak, meets again on Friday. It could decide whether to extend and tighten the lockdown restrictions currently in place across the country and set to last until the end of March.

The council is made up of the president, prime minister and several senior ministers, including the health secretary, defence secretary and justice secretary.

There has been concern among some politicians that the public are continuing to flout the new restrictions and not taking the quarantine seriously. The interior minister, Christophe Castaner, described those who are not following the new rules as "imbeciles."

Everybody here in France must stay at home until the end of the month.

There are five exceptions for when you can go outside: to go to a doctor; to go to a supermarket or a pharmacy; for urgent childcare or to visit a family member in need of urgent care; to go to work if you cannot work from home; and for some light exercise in your neighbourhood – understood to be an outside jog alone.

On Thursday, rules were tightened as cycling was banned and runners and walkers were restricted to a radius of two kilometers from their homes.

When you do leave the house, you must carry an "attestation" with you, showing why you have to go outside.

"We are at the start of this crisis," President Emmanuel Macron said on Friday. "We have taken exceptional measures to absorb this first wave, but we've started a race against the virus," he said at the start of a crisis meeting. People in France have been ordered to fill in forms giving reasons for being outside, or face fines. /Ross Cullen/CGTN Europe

People in France have been ordered to fill in forms giving reasons for being outside, or face fines. /Ross Cullen/CGTN Europe

The head of Chancellor Angela Merkel's office says the public's behavior this weekend will be decisive in determining whether lockdowns will be imposed in Germany, like the ones in place in France and Italy.

Merkel plans to hold a telephone conference with the leaders of Germany's 16 states on Sunday evening. This is likely to include the question of whether forced confinement, except in certain cases, should be imposed. Several heads of German states have suggested this week that it may be necessary.

In cities such as Berlin, many have started applauding for medical professionals from their windows every night.

Across the UK, thousands of children are attending their final day of school as the country prepares to close them down. Some will remain open to allow kids of "key workers," such as nurses and police officers, to continue being taught.

The government is facing pressure to announce more help for people whose wages are being impacted by COVID-19. The country's finance minister, Rishi Sunak, is expected to unveil a wage subsidy package on Friday to try to reassure businesses and workers.

And as the UK's stretched health service prepares for an expected jump in coronavirus cases, the government is sending letters out to more than 65,000 retired doctors and nurses asking them to come back to work. It's unclear how many will be able to, or what sort of qualifications they'll need to return. Long lines form outside supermarkets in London as security guards limit the number of shoppers inside at one time. /Tolga Akmen/AFP

Long lines form outside supermarkets in London as security guards limit the number of shoppers inside at one time. /Tolga Akmen/AFP

"Boris Johnson's government has to decide that itself," she said. "We are in a stronger position here. We have a huge internal market. And it is in the interest of the British to participate in that single market."

The Johnson administration has ruled out an extension of the 31 December deadline.

Von der Leyen said talks are ongoing, despite the EU's chief negotiator, Michel Barnier, contracting the virus. He said he has no symptoms. His British counterpart, David Frost, hasn't been so lucky. The UK's chief negotiator is self-isolating after exhibiting symptoms of the virus.

During the interview, Von der Leyen also floated the idea of the EU issuing "corona bonds" as a way to reduce the economic blowback from the deadly virus. These bonds would be backed by eurozone governments. It's an idea Italian Prime Minister Giuseppe Conte had already raised.

Meanwhile, EU citizens under lockdown who were hoping to whittle the time away by watching Netflix or YouTube videos, could find themselves with fuzzy quality. Both streaming platforms say they will reduce quality in Europe for the next 30 days in a bid to ease pressure on networks, which are under unprecedented strain as tens of millions of people are ordered to stay indoors. 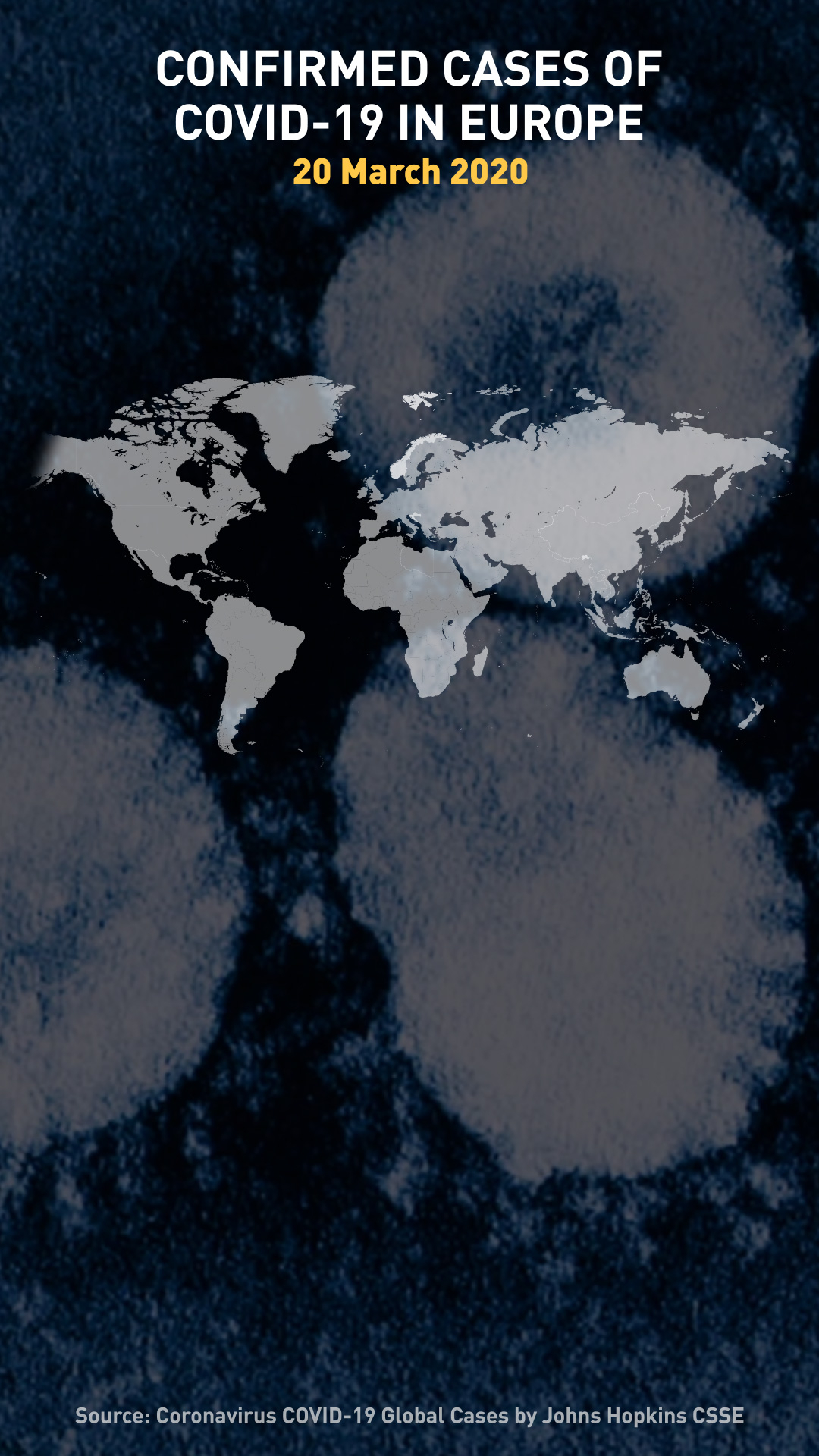 - The pan-European STOXX 600 index jumped 4.9 percent on Friday morning and is on course to erase the entire week's declines

- The global economy is already in a recession as economies hit by the pandemic are more widespread, according to economists polled by Reuters

- Swedish car maker Volvo suspends production at factories in Sweden, the U.S. and Belgium, but resumes production in China

- Apple limits customer purchases of iPhones on online stores in many countries including the U.S. and China to a maximum of two handsets per person