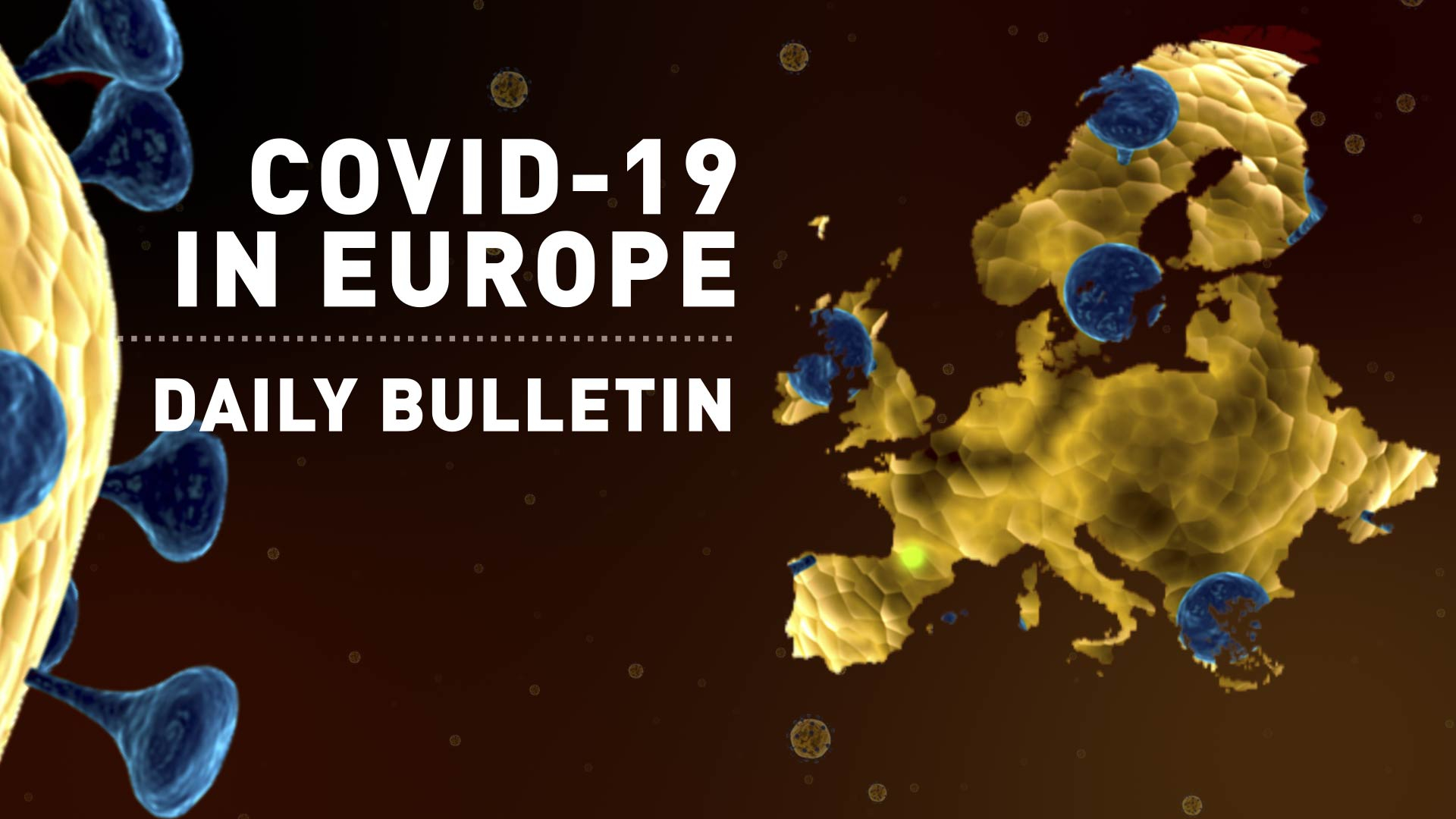 – Mittertech has become the first German town to impose a curfew

– World Health Organization director general has said that "To suppress and control the epidemic, countries must isolate, test, treat and trace"

– Croatia to close all services and shops, except food stores, pharmacies and petrol stations

– Belgium is the latest country to have gone into lockdown, from 12:00 local time Wednesday

– With EU borders closed to non-citizens, the European Commission says there are around 80,000 EU nationals outside the bloc waiting to be repatriated

By Julia Lbuyova in Geneva

Switzerland is one of the European countries worst affected by the coronavirus pandemic, with more than 2,600 people testing positive and 19 deaths. Switzerland now ranks ahead of China in terms of per capita infection rates.

The government has issued a recommendation for all residents to stay at home, especially the sick and elderly. It has also declared an "extraordinary situation," banning all private and public events, shutting down bars, restaurants, sports and cultural spaces. All "non-essential" shops have also been forced to shut down. The measures are set to remain in force until 19 April, subject to the situation.

Up to 8,000 soldiers have been called up to fight the coronavirus. This is the largest Swiss army mobilization since World War II. The militia will support the health care system by monitoring patients, medical transportation and hospital logistics such as beds disinfection and cleaning.

According to the Swiss Health Office if cases continue to rise, in a matter of days Swiss hospitals will not be able to cope with the pandemic.

EU leaders will start closing their external borders after agreeing to the measures late on Tuesday night. European Council President Charles Michel encouraged them to implement the measure "immediately."

Brussels is also working to ease gridlock at some internal borders after countries such as Poland enacted rigorous controls and health checks. It's led to hours of bumper-to-bumper traffic at borders, hampering the flow of goods across the single market. EU transport ministers will hold a conference call this morning to try to remedy the situation.

From noon on Wednesday, Belgium will join a growing list of countries in a state of lockdown. The government issued far-reaching measures to curtail social interactions until 5 April. People will only be allowed to leave their homes to go grocery shopping, visit a doctor or go to work if they are unable to telecommute. Companies that require their employees to come to the office will be fined if they don't put social distancing measures in place.

The beefed-up measures have led to long queues outside grocery stores, which are limiting the number of patrons they let inside at any one time. You can check out our videos and pictures here: https://twitter.com/ToniWaterman_

Like France and Italy, Belgium has extended and widened the bans on short-selling as markets continue to experience wild swings. 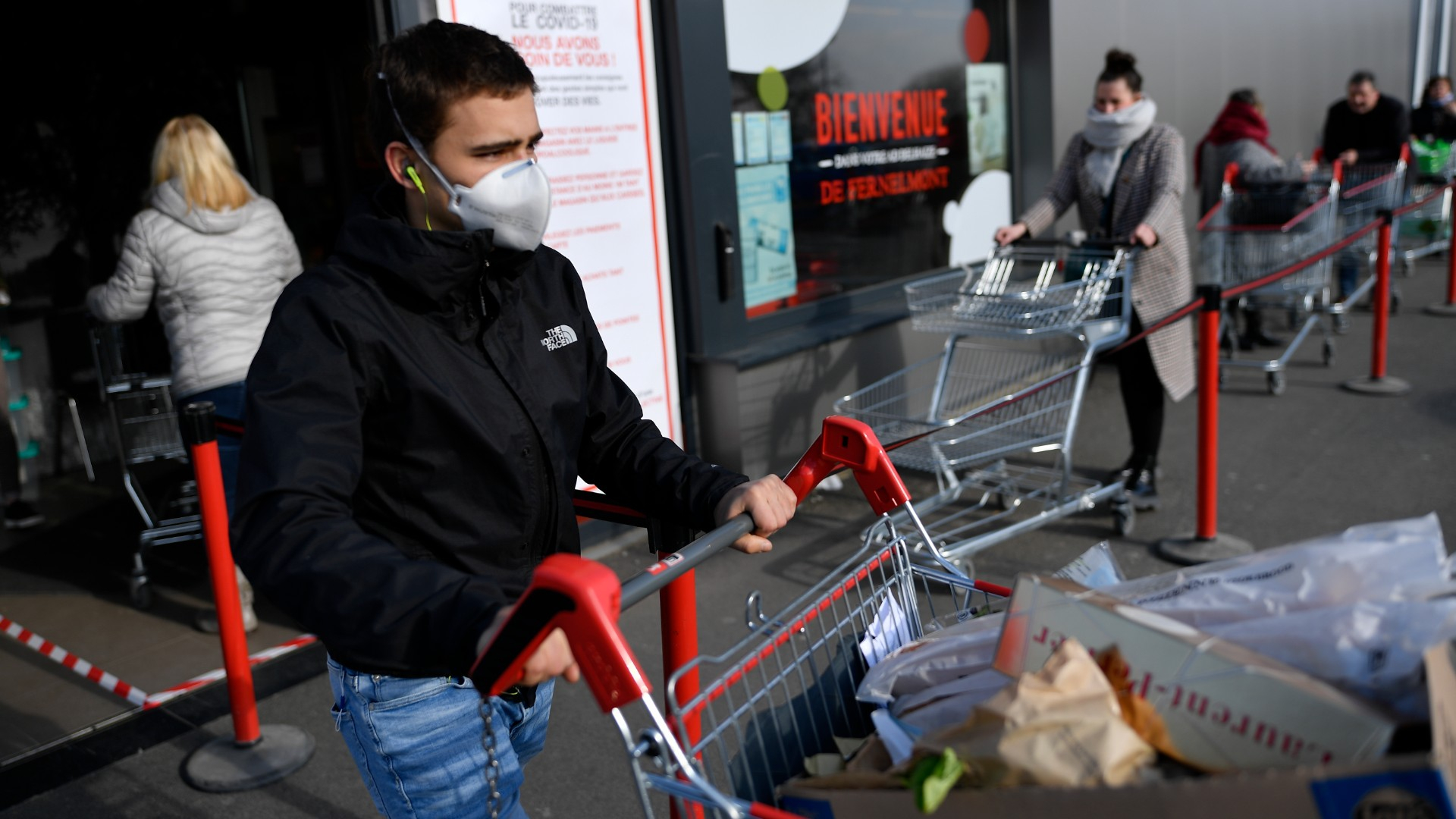 France hopes to start seeing a slowdown of coronavirus infections within the next 12 days, according to the country's health minister. Following the government's decision to impose a national lockdown, Olivier Veran said: "I see that gradually people are getting the message."

Veran added: "We will intervene where necessary to make sure people respect the confinement." And said police officers are now regularly stopping citizens in Paris to check if they are going to work, a doctor or doing only essential shopping. Members of the public face a fine if they leave the house without a document attesting to why they are moving around the city.

The French government has taken unprecedented measures to try to control the spread of the new coronavirus.

Germany has 9,414 confirmed coronavirus cases and 26 deaths as of Wednesday at 9:00 GMT, according to data from Johns Hopkins University and the Robert Koch Institute.

German authorities have started enforcing the European Union's entry ban on most non-EU citizens. Thousands of travelers have already been controlled at Frankfurt airport, the country's largest.

"Non-essential" shops and public gathering spaces across Germany have closed following new rules announced earlier in the week. Germany's chancellor, Angela Merkel, will give a television address on Wednesday evening, the first time she's addressed a specific topic in this way since taking office in 2005.

The number of intensive care beds in German hospitals is set to be doubled according to an emergency plan from the federal and state governments. The country currently has 28,000 beds, the most per capita in Europe.

The government promised mortgage "holidays" for those in financial difficulty, as well as $400 billion in loans and $20 billion in other aid to protect businesses. But already there are calls from MPs and trade unions for swifter action, particularly for renters and those working in the so-called gig economy.

UK government advice now warns against all but essential travel outside the country, although ministers say shipping and freight should continue. The European Union is now banning all travellers from outside the bloc for 30 days.

Neil Ferguson, the professor who has been advising the government and was behind the latest modeling that led to recent measures, has tweeted that he is now self-isolating after developing coronavirus symptoms.

UK supermarkets are saying they will now prioritize vulnerable and elderly people for online deliveries and start limiting certain items on the shelves for customers who try to buy excessive amounts.

The government and the supermarkets insist the only threat to regular food supplies is customer stockpiling – so-called panic buying – and that otherwise stock and resupply are not an issue at this stage.

But is social distancing happening in London? We took to the streets to find out:

– Nordic Choice, one of Scandinavia's largest hotel companies, is to lay off 7,500 staff – almost half of its workforce

– Lego is to close all its stores outside China due to the virus, but will continue online sales

Talk of the Trading Floor with Juliet Mann

Don't look! Cover your eyes now  – this markets report is not for the faint-hearted.

"Risk appetite is essentially vanishing before our own eyes, following what remains is a dramatic time to be watching financial markets," said Jameel Ahmad, global head of currency strategy and market research at FXTM.

"We're still looking at a situation where a fast-moving car has been required to slam its brakes in an emergency stop and nobody has any idea when the same car will be able to move again, let alone at the pace that we considered as normal."

It has been a dire session across all major asset classes: bonds are being dumped, shares are falling, oil is slipping and gold is falling, too. Investor sentiment has been crushed.

From New Zealand to Spain, governments around the world have promised to hand out billions of dollars in tax breaks and cash handouts to help businesses and citizens get through the coronavirus pandemic, but are financial markets refreshed and reassured? They are not.

After a late-day slump in Asia, European stock markets tanked with all sectors dipping except telecoms.

In London, panic has overshadowed those sweeping emergency measures announced by the government. Rolls-Royce shares plunged 18.7 percent in early trade, and plane manufacturer Airbus fell 14 percent after the US said it was set to increase tariffs on its planes by 50 percent.

We normally see Brent Crude as the oil-price benchmark but the chatter today is around the U.S. crude oil price, which has lost an astonishing further 13 percent today – and is now valued below $25 for the first time since at least 2003. Traders tell me it is possible that oil could fall to $20 by the end of this week.

"Oil prices seem to be fighting a three-headed monster that is a global recession, oversupply deluge and demand destruction. It doesn't seem like anyone is getting on a plane anytime soon and with social lockdowns likely to remain in place for at least a month, oil seems like it has only one direction to go," said Edward Moya, senior market analyst at OANDA.

I don't normally show you currencies, either, but I'm going to today… because the British pound dropped to its lowest level since 1985. That's a 35-year low, lower than after the Brexit vote.

So the themes of the day? Investor alarm and negativity. The markets are bracing for recession. What they want and need is good news – from the authorities and specifically health experts on defeating the virus. Until then, the sell-off continues...

From CGTN America: COVID-19 - who should we trust?