"This is not the spirit of the European Union."

It doesn't cut much deeper than that in Brussels.

Maggie De Block, the Belgian health minister, today criticized the moves by Germany, France and the Czechia to ban the exports of anti-coronavirus equipment such as masks and goggles. The bloc's crisis management commissioner, Janez Lenarčič, echoed her sentiments, explaining the Commission does not back "measures that would favor one member state at the expense of others." Thanks to our correspondet Toni Waterman for those lines – you can read her full report on our website.

In other European COVID-19 news, Starbucks has stopped accepting reusable cups in its UK stores. It hopes this will stop the spread of the virus, but it will also keep rewarding customers who bring their own – in line with its enviromental policies.

Elsewhere, it was bad news for fans of Shiraz and Chardonnay as many Australian wine makers admit they may have to scrap their 2020 harvest due to the effect wildfires had on grapes in the south of the nation.

In Europe, there is a mixed picture for German manufacturing as January figures show the nation was recovering from a two-year dip... before the novel coronavirus struck. Green shoots of recovery may still be seen, but it's expected supply-chain issues will still knock German factories.

And there's a new Brexit figure out: $5.7 billion is the amount thought to have already been spent by the UK government in preparing for the material exit from the EU in December.

Finally, thanks to my colleague Daniel for covering my absence yesterday. You may see a few different names pop up in the future, so as we share out the work, don't forget to share Global Business Daily far and wide!

Was this email forwarded to you? Sign up here to get it direct!

Starbucks has banned reusable cups in its UK stores, but says it will still give 25 pence (32 cents) discounts to customers who bring their own mugs. It will also suspend its policy of charging around 12 cents when customers ask specifically for paper cups.

The Simon Wiesenthal Center, which researches the Holocaust and modern anti-Semitism, has said it's discovered Credit Suisse accounts linked to around 12,000 Nazis who escaped to Argentina in the 1940s.

Australia's $4 billion-a-year wine industry is in danger of losing significant portions of its 2020 vintage, as bush fires have left grapes "tasting like... ashtrays," according to growers in New South Wales and Victoria.

New figures for January show German manufacturing was rebounding from a two-year dip just as the COVID-19 outbreak began. Experts do not expect the five percent hike to continue, as the virus fears affect global markets and supply chains.

The Indian government has been forced to implement an emergency takeover of the nation's fourth-biggest bank. Yes Bank had struggled to bring in capital for several months after being warned to shape up its balance sheet, and its failure led to the Reserve Bank of India's action. It has warned investors and depositors not to panic.

The People's Bank of China has so far decided not to follow the U.S. Federal Reserve in cutting interest rates in reaction to COVID-19's disruption of international markets. Both Italy and South Korea have launched fiscal stimulus packages, but it's unclear what effect cheaper credit would have on an economy in which consumers are not buying, in part because many are quarantined.

Didi Chuxing, the ride-hailing app that dominates the Chinese market after buying out Uber's China operations, has felt the effect of the COVID-19 lockdown. It's estimated it lost half of its passengers in the month following the outbreak in Wuhan.

The UK government has spent around $5.7 billion in preparations for the UK's exit from the European Union, according to the country's National Audit Office.

Technology giant Samsung has again suspended operations at its factory in the South Korean city Gumi, after a sixth worker was diagnosed with COVID-19. It's the second time the Gumi plant has been shut, but Samsung expects this closure to last around one day.

COVID-19 could cost airlines up to $113 billion in lost revenue – that's the message from aviation body IATA. Officials also addressed the risks of infection on flights. CGTN's Miro Lu reports from Singapore.

Karen Krizanovich is a movie critic and broadcaster. She spoke to CGTN Europe about the effect COVID-19 is having on the global film industry, as the makers of the latest James Bond movie, No Time To Die, postponed its release; but at the same time UK cinema chain Cineworld said it had seen no significant dip in audience numbers since the outbreak.

This must be serious if 007 has been laid low, he is only human.

Well, I think that people are being very cautious about Coronavirus, particularly in large gathering places. And there are, for example, there's a Las Vegas convention that's going forward. And yet there's a convention of television executives closing down in Nice. So, whether it's going to impact cinema-going as of yet, we haven't seen that.

But it is predicted that people are going to say, you know, 'maybe I'm just going to stay home.'

So, the latest Bond movie is postponed. How much of an impact does a delay actually make? What are we talking about here in industry terms?

Well, we were looking at a reduction of probably 30 percent of what the makers of Bond expected for its release. It was 10 April, I believe it was scheduled for, [now] moving to near American Thanksgiving - 12 November worldwide, is actually the traditional Bond release.

Most of the Bond films recently have been released around that moment. So the difference is going to be, they're trying to do damage limitation. They've already had a great deal of their marketing already expended. But there's also players and associated investments in place.

I guess the thing is this simply shows how important China is to the world market. If China's out of the game, your movie's in big trouble?

Why delay for a whole seven months? I mean, why leave it so long?

I think it has to do with the global release simulations that have been done. And I think that they are seeing that this is going to be the optimum time for the big fish to be released... before Christmas for the holidays. But right around Thanksgiving.

It isn't just Bond, of course. Mulan, Wonder Woman, films geared towards those younger audiences. I guess if parents don't want to go to the cinema, that means that children are not going either. And that's going to have a huge financial impact on cinemas worldwide, isn't it?

Yeah. Well, for the time being, the ones that you've mentioned have not been moved. But Bond is such a massive juggernaut of a film... this is the 25th of the franchise, that's going to be like a big fish in a big pond. The little fishes are going to move away and move on. Even though they're large, they're not as big as James Bond.

It's very easy talking to you to think the movies is just about these lovely pictures that we've been seeing. The truth is, it's business. It's money. And what's the impact going to be on all of these companies?

There's going to be a lot of damage limitation. For decades and decades, the cinema-going business has been in jeopardy from various things, whether it's television or streaming or whatever. But we're looking at probably an eight-figure loss, I think at least. And we've projected, I think, the Chinese market could possibly be costing up to $5 billion of losses.

It's International Women's Day on Sunday, and as we're a Monday-to-Friday newsletter, we've decided to bring you some stats a few days early. But remember to check our social media channels on Sunday, as we celebrate. 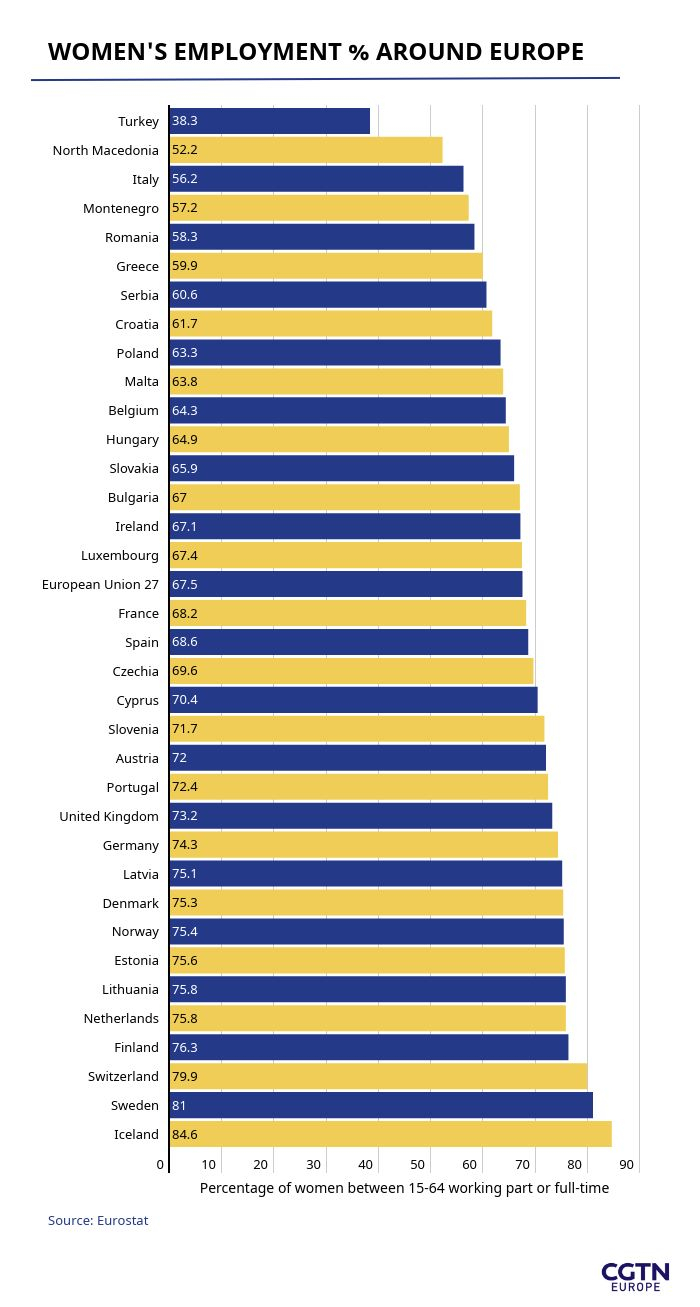