UK chief medical adviser: COVID-19 death rate may be 'much below' 1%
Thomas Wintle 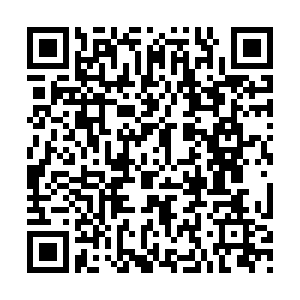 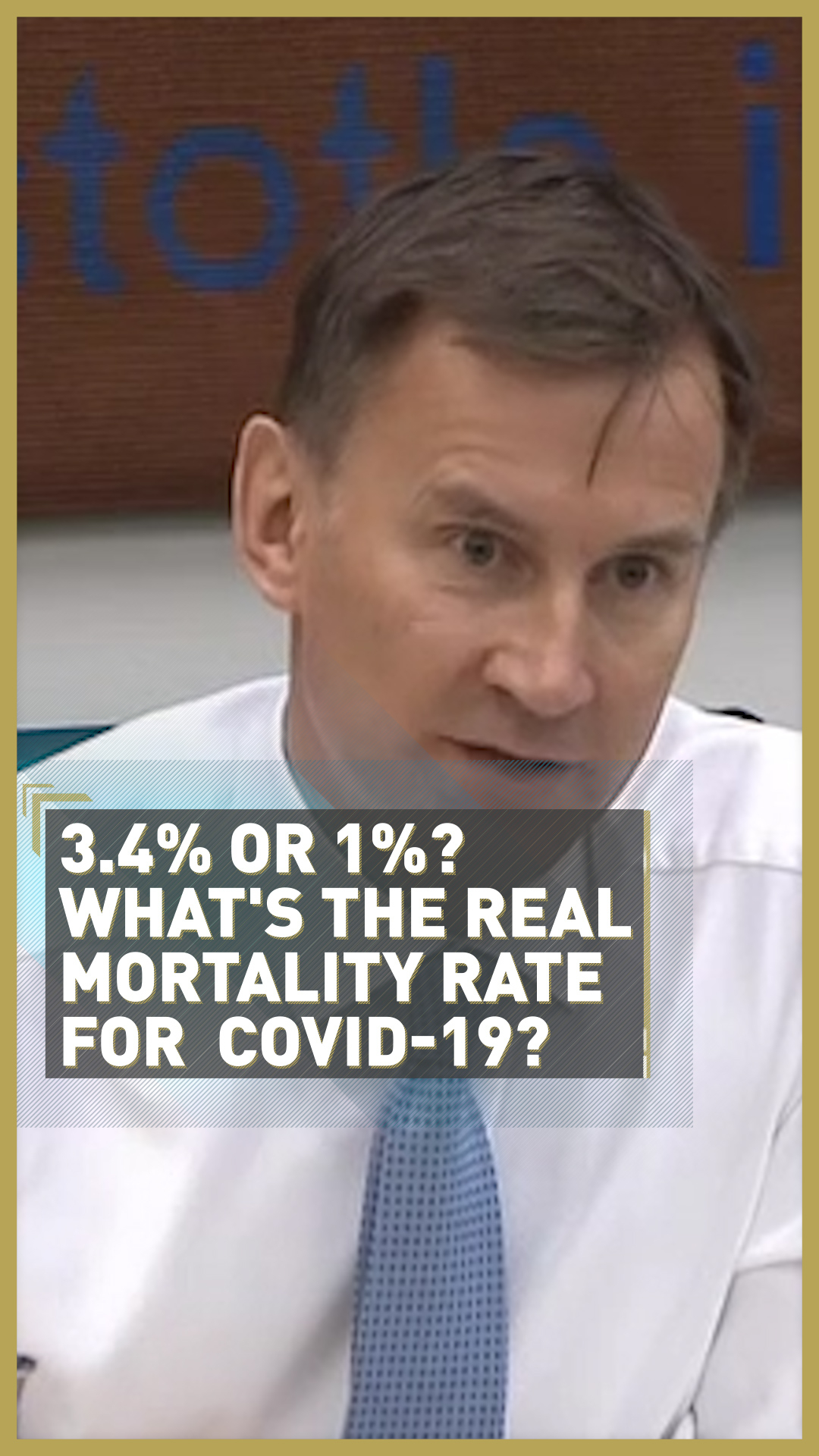 The mortality rate for those who contract COVID-19 may be much lower than one percent, according to the UK government's chief medical adviser – significantly lower than the figure reported to have been shared by the World Health Organization (WHO).

On Tuesday, WHO director-general Tedros Adhanom Ghebreyesus announced during a press conference in Geneva that 3.4 percent of confirmed cases of COVID-19 had died, which would put it well above the fatality rate for seasonal flu, of just under one percent.

However, Chris Whitty, taking questions from a committee of Members of Parliament in London on Thursday, said the figure had been reported misleadingly and was not the actual fatality rate for the novel coronavirus.

"I have a reasonably high degree of confidence that one percent is at the upper rate of what the mortality rate is, to be clear. What the director-general was reporting was essentially dividing the number of reported deaths by the reported number of cases and getting to a number," he said. 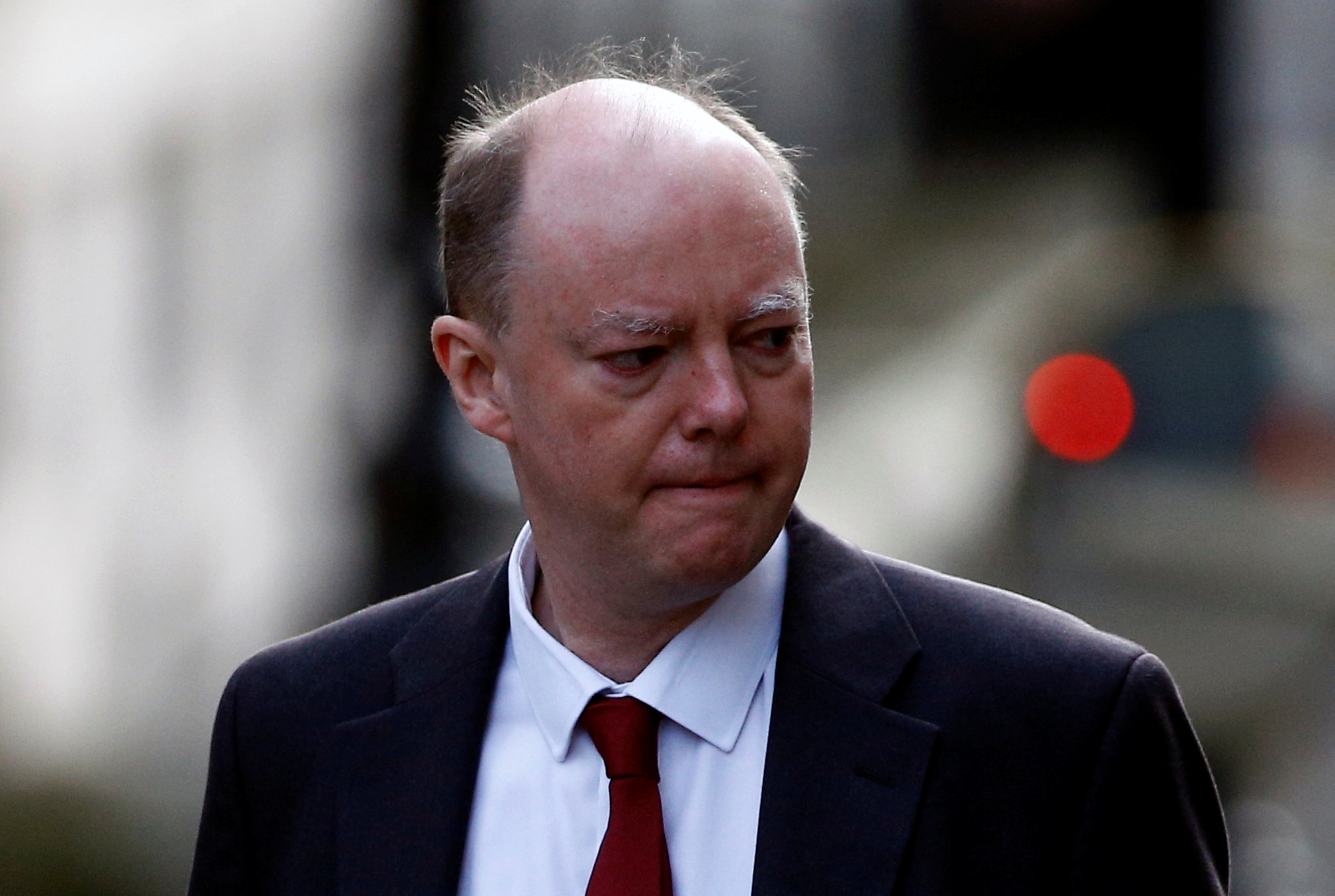 Chris Whitty, the UK's chief medical adviser, told the UK Health Select Committee: 'If you're missing all the asymptomatic cases, you inevitably therefore end up at an exaggerated view of what the mortality rate is.' /Henry Nicholls/Reuters

Chris Whitty, the UK's chief medical adviser, told the UK Health Select Committee: 'If you're missing all the asymptomatic cases, you inevitably therefore end up at an exaggerated view of what the mortality rate is.' /Henry Nicholls/Reuters

"That isn't a mortality rate. That's just a percentage of people reported who've died," he added.

"To be clear, I'm not criticizing what [Ghebreyesus] said. I'm just saying the way it was reported made it sound rather different from what he actually meant by it."

Giving evidence before the UK's Health Select Committee on the COVID-19 outbreak, Whitty outlined why he thought the mortality rate might be lower than previously assumed.

"If you're missing all the asymptomatic cases, you inevitably therefore end up at an exaggerated view of what the mortality rate is," he said.

"The modelers in the UK… have looked at the data really carefully and I think we are all convinced that the upper end of the mortality rate overall in terms of people infected is one percent," said Whitty.

"My own view is it may well be lower than that, because there may well be a lot of people who are infected and have no symptoms who we can't currently identify. And, therefore, if anything, I think it'll go down from that rather than up." 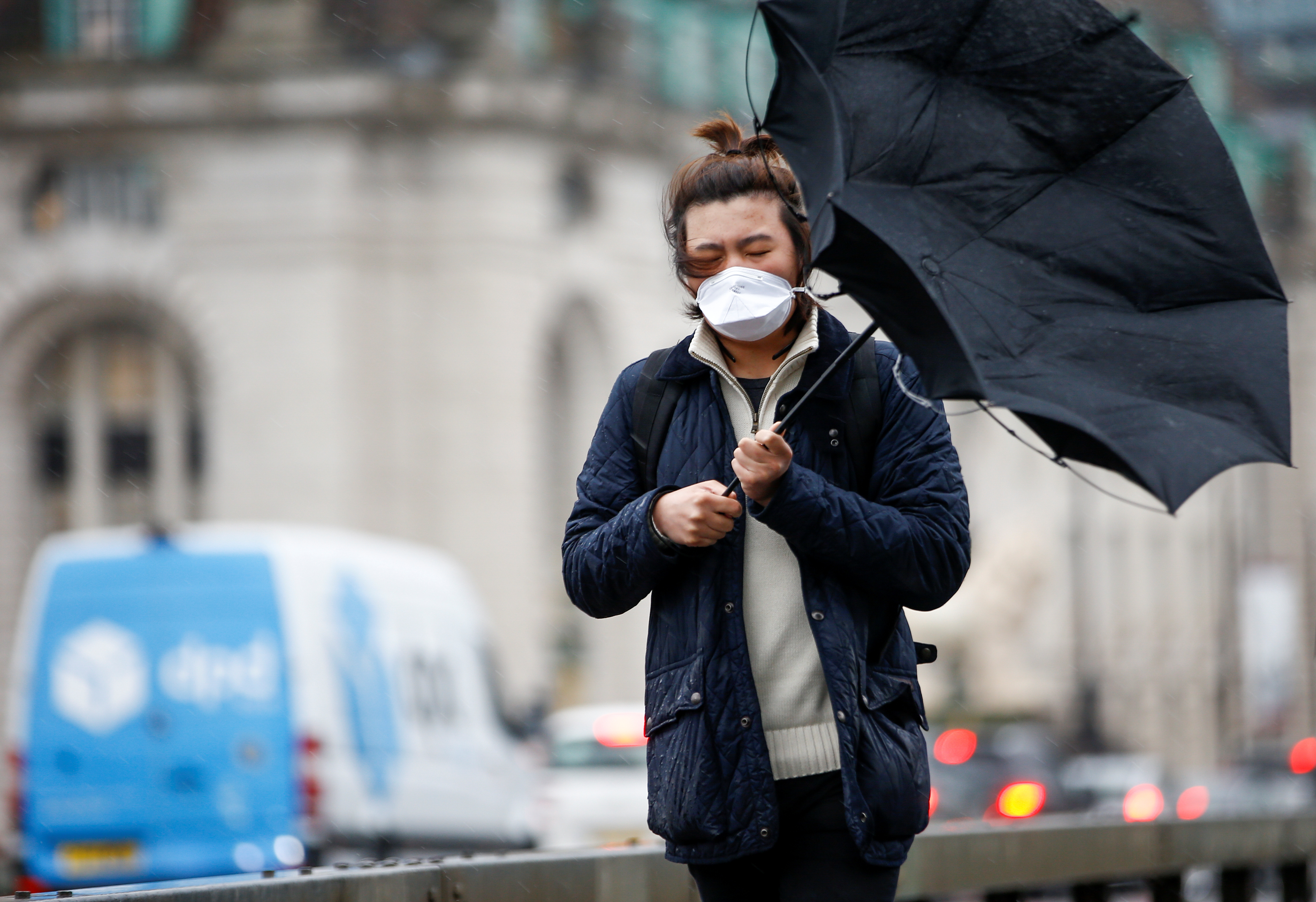 Elderly most at threat, but fatality rate still low

The committee meeting, which was chaired by former health minister Jeremy Hunt, also focused on how the fatality rate changed in relation to age, with Whitty again hoping to allay fears.

"For people who are at the lower end of the age spectrum, it's well below one percent. It does start to increase above 60, a bit more above 70, and by the time you get up to 80, in Chinese data, mainly from Wuhan … the mortality rate looked as if it was somewhere between eight and nine percent," he said.

But while the number may appear to be high for the elderly, "put the other way around, that means more than 90 percent of over-80-year-olds survived it, even in a stretched health service in China in this epidemic."

"It is clear that the risk is very heavily weighted towards older people," said Whitty, "but I think people translate that into 'if I'm old and then I get it, I'm, you know, I'm likely to pass away.' Actually, the great majority of people will survive this even if they're in their eighties."

Whitty went on to focus on the importance of washing your hands, saying that people could pick up the novel coronavirus from bus and train handrails for up to 72 hours after someone infected had touched the surface.

According to Whitty, the droplets that cause the COVID-19 infection can stay on hard surfaces for up to three days, but in most cases they would be "largely gone" within 48 hours.

"There will be some risk of transmission and the risk peaks immediately after they've done it and it goes down over time.

"It's probably largely gone by 48 hours and almost completely gone by 72 hours on a hard surface. On soft surfaces, viruses last for a shorter period."

He went on to urge people to wash their hands before touching their faces.

"Just touching it will not give you the virus. It's if you touch it and then touch your face, having not washed your hands between them," he said.

"If you go on the tube and touch a rail that's fine, but just be aware of what you do with your hands. Don't touch your face, wash your hands and then you can do what you like." 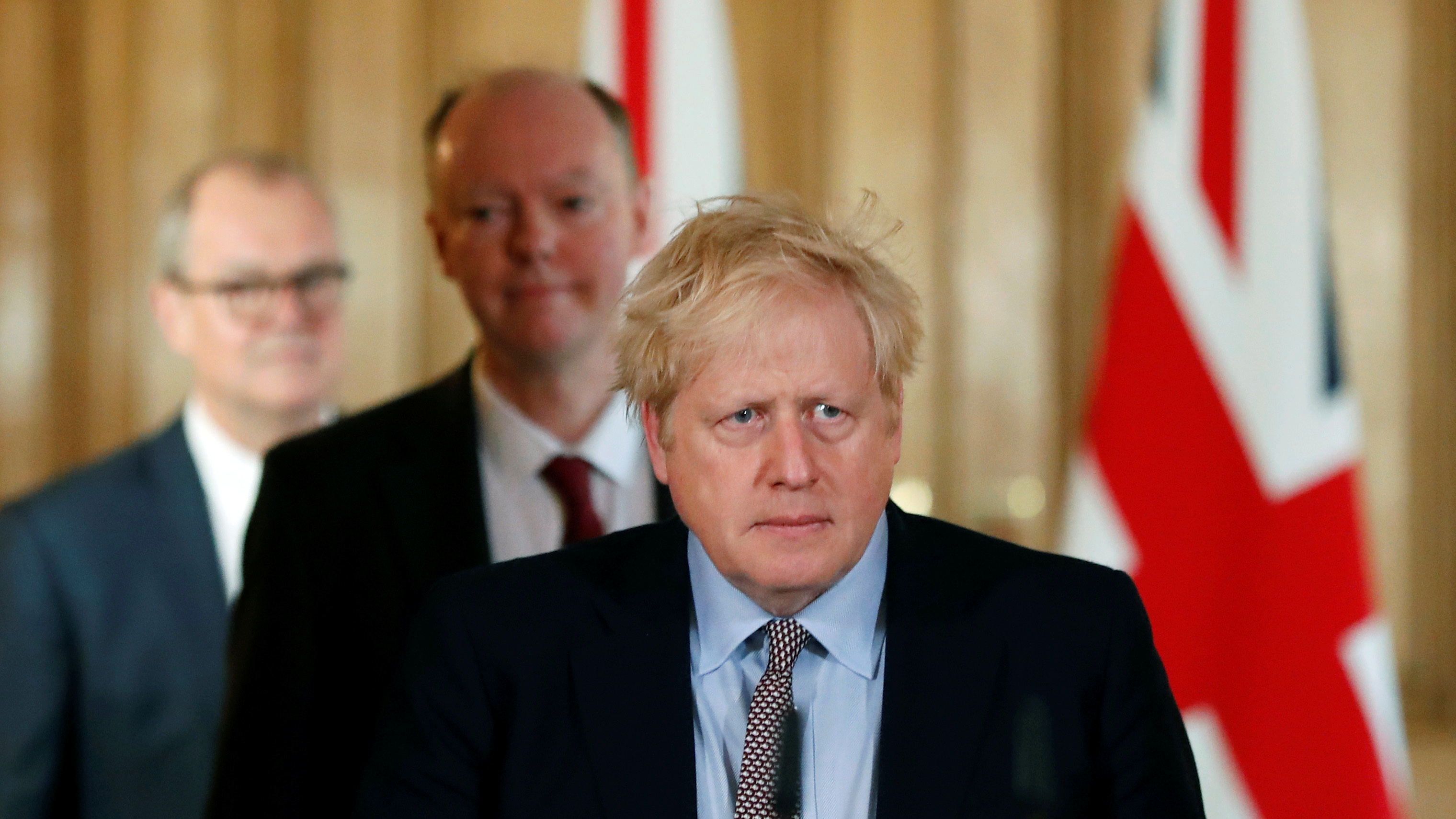 Whitty's address comes as the number of cases in the UK rose from 85 to 115 on Thursday, and the first death was reported, of an elderly patient with an underlying health condition, at the Royal Berkshire Hospital in Reading, west of London

Britain has held off measures to restrict movement or to cancel large gatherings for fear of hurting the economy, but early on Thursday regional airline Flybe became one of the first big corporate casualties of the outbreak.

UK Prime Minister Boris Johnson said he is optimistic that Britain is well prepared to cope with the spread of the virus, but health minister Matt Hancock said the coming weeks would be tough.

The government's action plan involves containing the virus, delaying its transmission, researching its origins and mitigating its impact.

Whitty, questioned by lawmakers, said Britain had mainly moved into the second stage and was now considering measures to try to delay the peak of an epidemic, which officials are anticipating in the coming weeks.

"The original plan... was very much predicated on the idea of 'if it could be controlled in China and contained everywhere else, this virus might go away.' I think the chances of that happening are now very slim. Slim to zero," Whitty said.

"As time goes by, we then may start to move into the more socially determined actions... We've moved from a situation where we were mainly in contain... to now we're basically mainly delay." 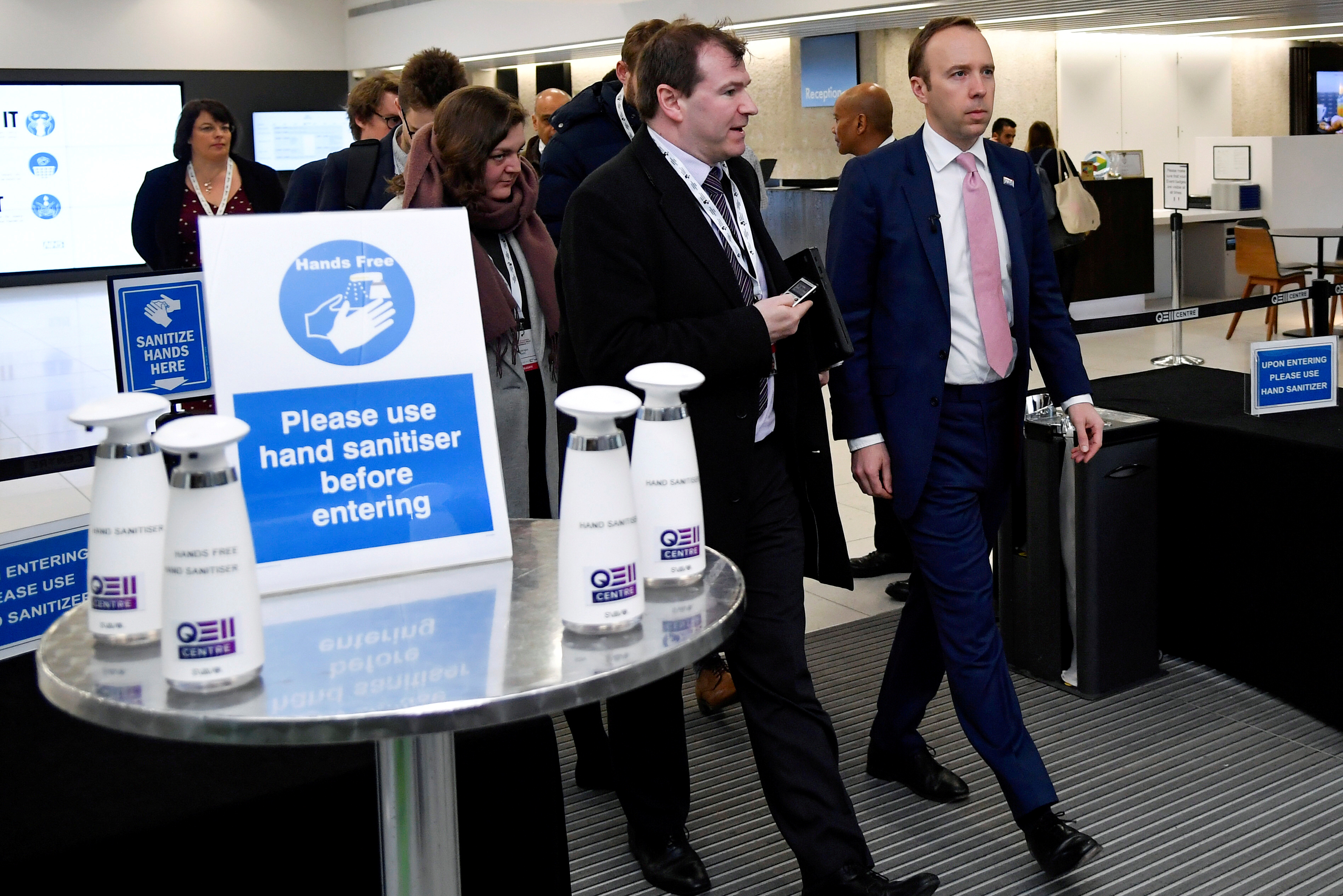 UK health minister Matt Hancock said the coming weeks would be tough for the UK as the number of cases of COVID-19 in the UK jumped to 115 on Thursday. /Toby Melville/Reuters

UK health minister Matt Hancock said the coming weeks would be tough for the UK as the number of cases of COVID-19 in the UK jumped to 115 on Thursday. /Toby Melville/Reuters

Johnson told the UK's ITV television network that Britain's Scientific Advisory Group for Emergencies was meeting to consider options to try to delay the spread of the outbreak – ranging from "quite draconian stuff to more targeted interventions."

Asked whether Britain was close to taking measures such as stopping large public gatherings, Johnson said: "We'll see what the scientists advise."

A spokesman for Johnson said the government would announce publicly when Britain had moved to the second phase of its plan.

The government has said it could encourage home-working, cancel large-scale gatherings and possibly close schools to slow the spread of the disease and delay the peak of the outbreak until summer, when the health service is under less pressure.