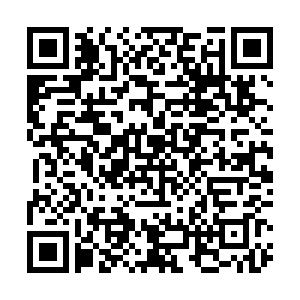 Greece has stopped nearly 10,000 migrants from entering via its border with Turkey over the past 24 hours, a Greek government source said Sunday, after Turkish President Recep Tayyip Erdogan said he would "open the gates" to Europe for refugees.

A massive influx of migrants has swelled at the Greek border over the weekend after Ankara made the announcement earlier in the week, with Greek security personnel firing tear gas at migrants along the European frontier.

The EU's border protection agency Frontex said on Sunday it is on "high alert" at the bloc's south-eastern boundaries, adding that it was deploying support to Greece. The EU's commissioner for migration, Margaritis Schinas, has also requested an extraordinary meeting of EU interior ministers to discuss the situation.

Migrant children wait near Skala Sykamineas on the Greek island of Lesbos island after crossing the Aegean Sea from Turkey. Aris Messinis/AFP

Migrant children wait near Skala Sykamineas on the Greek island of Lesbos island after crossing the Aegean Sea from Turkey. Aris Messinis/AFP

"From 0600 (0400 GMT) Saturday morning to 0600 Sunday morning, 9,972 illegal entrances have been averted in the Evros area," a Greek government source said, referring to the northeastern region along the Turkish land border.

Large crowds tried to cross into Greece via the Kastanies Forest in the early hours of Sunday, the source added.

Greek authorities said 73 migrants had been arrested, adding that they "weren't from Idlib" - the war-torn Syrian city where a humanitarian crisis has forced citizens to flee - "but from Afghanistan, Pakistan, Somalia." 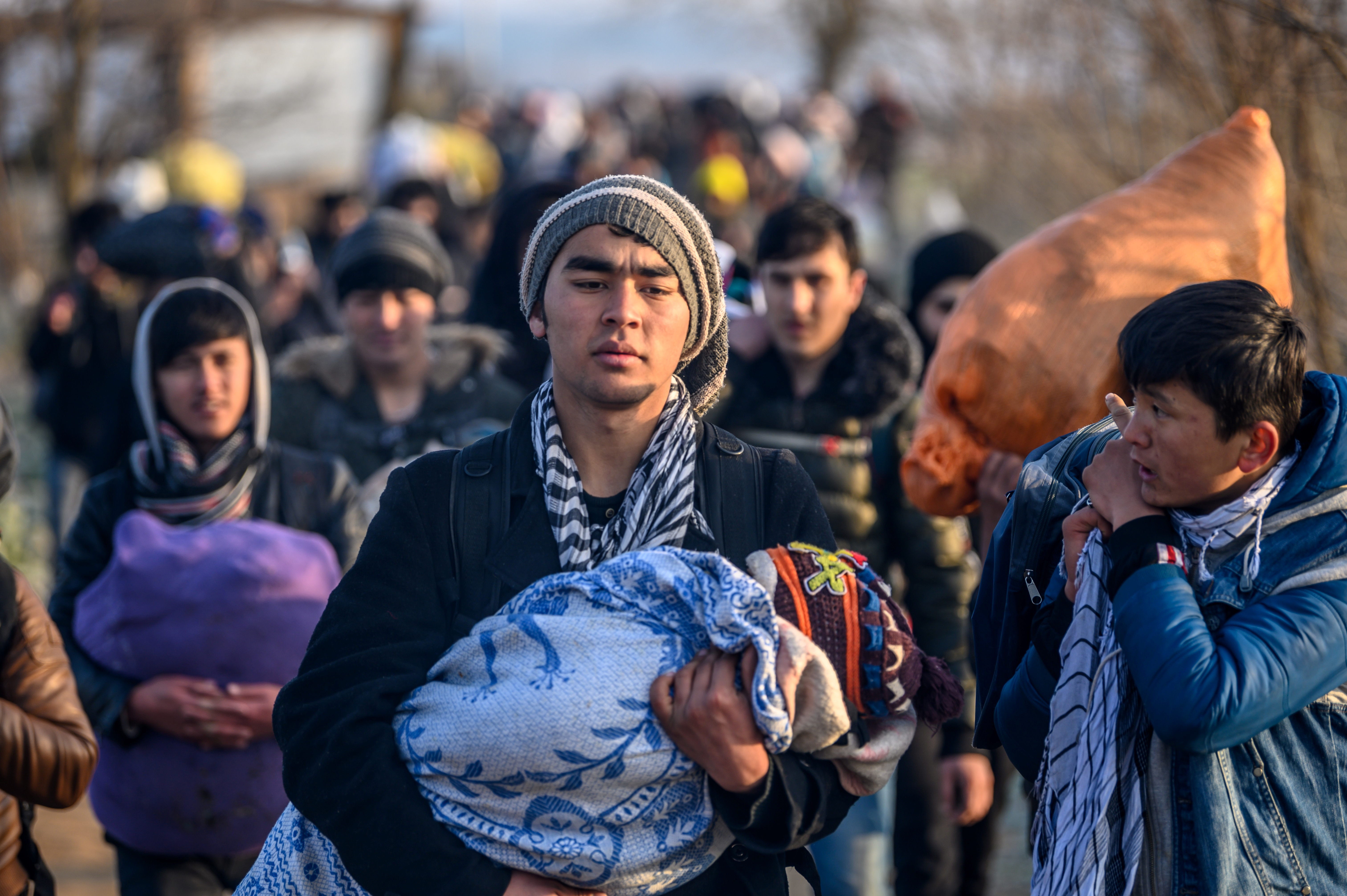 Frontex's decision to beef up numbers at the Greek-Turkish border comes after Greek riot police fired tear gas on a group of migrants at its border with Turkey at Kastanies - just over 550 miles (900 km) north-east of Athens - on Saturday.

"We have received a request from Greece for additional support," a Frontex spokesperson said: "We  have already taken steps to redeploy to Greece technical equipment and additional officers."

Greek government spokesman Stelios Petsas told reporters on Saturday that Athens "will do whatever it takes to protect its borders." 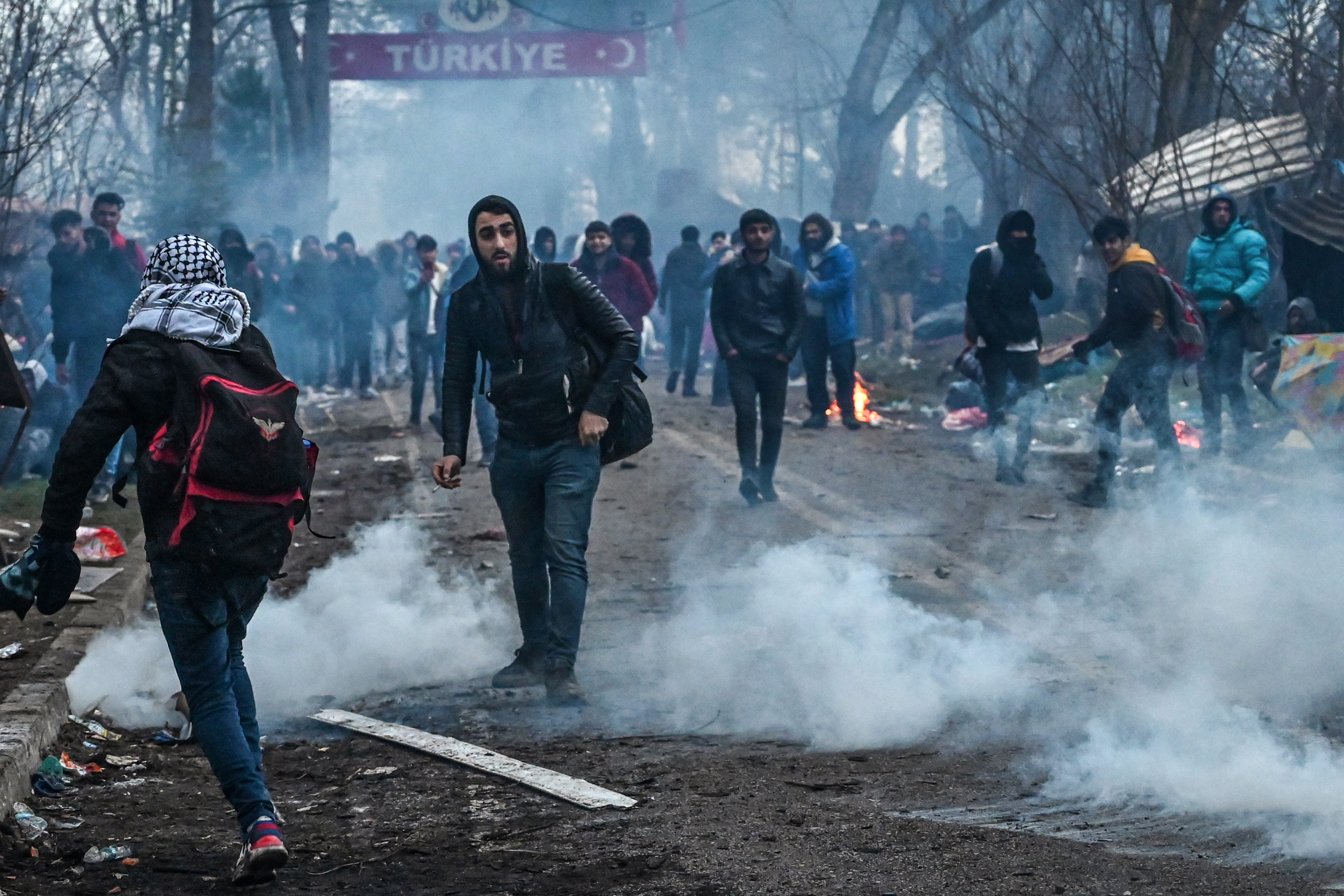 Migrants at the border between Turkey and Greece among tear gas fired by Greek police. Ozan Kose / AFP

Migrants at the border between Turkey and Greece among tear gas fired by Greek police. Ozan Kose / AFP

Masses of Syrian migrants started gathering at the border between Greece and Turkey after the Turkish government declared on Thursday that it will no longer stop Syrian refugees from reaching Europe, as a direct consequence of the killing of 33 Turkish soldiers by Syrian government forces in Syria's Idlib region.

Ankara had reached a deal with the European Union in 2016 after the crossing of nearly a million refugees from the Turkish Border to the Greek islands in 2015 sparked a migrant crisis in Europe.

On Saturday, Turkish president Erdogan said that some 18,000 migrants have already crossed borders from Turkey into Europe, and added that the number is bound to rise in the near future. At the moment there is no evidence to back these numbers.

"What did we do yesterday [Friday]? We opened the doors," Erdogan said. "We will not close those doors. Why? Because the European Union should keep its promises. We don't have to take care of this many refugees, to feed them."

Erdogan complained that the funds transferred to Turkey from the European Union, as agreed within the EU-Turkey accord, were arriving too slowly and were not sufficient to support all the refugees.

EU foreign policy chief Josep Borrell tweeted on Friday that the EU calls for rapid de-escalation in Idlib and that he has received a reassurance from the Turkish foreign minister that Turkey remains committed to the joint EU-Turkey Statement.

The Greek government intends to send more reinforcements to its sea and land borders to prevent migrants from crossing and also avoid a possible spread of coronavirus to the Aegean islands. 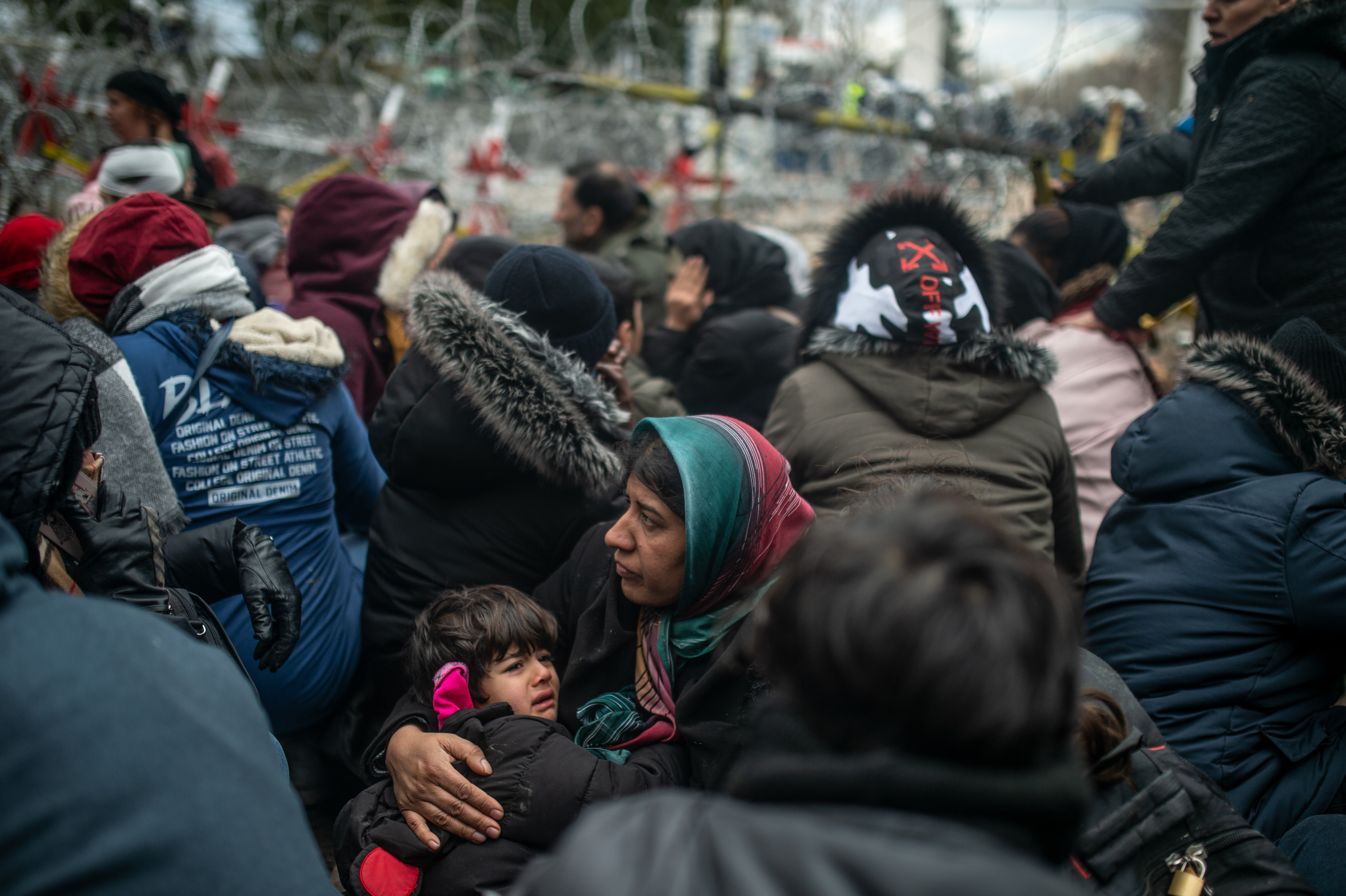 Migrants wait behind a barbed wire fence at the border at Pazarkule, between Turkey and Greece. Bulent Kilic / AFP

Migrants wait behind a barbed wire fence at the border at Pazarkule, between Turkey and Greece. Bulent Kilic / AFP

Since the military operation launched by Russian-backed Syrian government forces in the territory of Idlib against Turkish-backed Syrian rebels in December 2019, almost a million Syrian civilians had been displaced in what has been called the worst humanitarian crisis in the nine-year Syrian war.

With the conflict moving to the northern region of Idlib, more and more people have been pushed towards the border with Turkey.

According to data from 2019, Turkey is already hosting 3.6 million registered refugees, and the Turkish government says it cannot hold any more.

The Syrian refugees in Turkey complain about the country's lack of work opportunities and the impossibility of building a life there. When Turkey declared it would open the border to Greece, thousands moved towards what they hope would be a better life in the EU.

Turkey reportedly encouraged refugees towards the borders, driving them on buses and taxis. But when they arrived at the border with Greece, they found it closed and guarded by police ready to fire tear gas at them.

The refugees are now stuck between the Turkish and Greek border, unwanted by both countries.